Cholula, Mexico has a lot to offer including a stunning string of churches, hip shopping, volcano views, a Mayan archaeological site, and fried grasshoppers. It’s all in our Cholula travel guide. 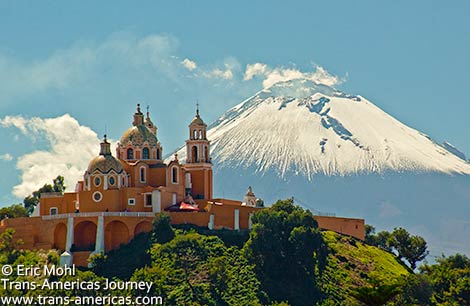 Santuario Nuestra Señora de los Remedios church atop the Great Pyramid of Cholula with Popocatépetl volcano looming in the background.

The churches of Cholula, Mexico

There are around 40 churches in the town of Cholula, Mexico, however, one quite literally stands above the rest. The Spanish built the Santuario Nuestra Señora de los Remedios church is located on top of a massive pyramid called Tlachihualtepetl (which means “artificial hill” in the native Nahuatl language). The temple was so overgrown when the Spanish got there that they claimed they thought it was just a hill, not one of the most important indigenous spiritual centers.

Never mind that the Tlachihualtepetl temple (which our Lonely Planet guidebook calls Tepanapa for some reason) is so big that the folks at the Guinness Book of World Records calls it “the largest pyramid as well as the largest monument ever constructed anywhere in the world, with a total volume estimated at over 4.45 million cubic meters.” 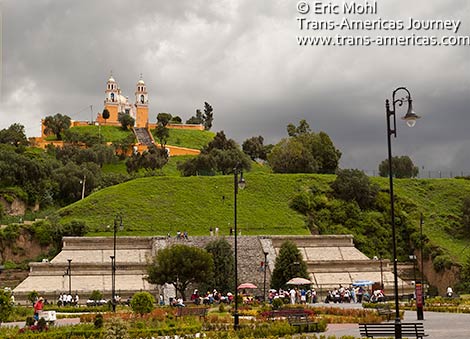 The so-called Great Pyramid of Cholula (Tlachihualtepetl) topped by the Santuario Nuestra Señora de los Remedios church which the Spanish built on top of the temple.

These days Tlachihualtepetl is a combo church and archaeological site. The Iglesia de Nuestra Señora de los Remedios is a major pilgrimage site and bustles with activity. It also affords some of the best views of neighboring Popocatépetl volcano (the second highest peak in Mexico at 17,802 feet / 5,426 meters) and Iztaccíhuatl volcano (the third highest peak in Mexico at 17,159 feet / 5,230 meters) from its perch atop the temple. 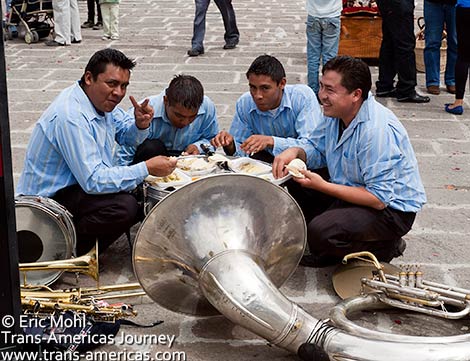 The band taking a lunch break during a celebration at Santuario Nuestra Señora de los Remedios church in Cholula, Mexico.

The church is surrounded by the partially excavated ruins of the city that once surrounded the massive pyramid and this archaeological site is accessed by walking through a tunnel that goes right through Tlachihualtepetl itself which is a great way to see the different layers and levels of construction.

Or at least that used to be how you got into the archaeological complex…When we were there the tunnel was closed for repairs and had been for a year. The woman selling tickets to the site did not exude hopefulness when asked about the likelihood of the dramatic tunnel entrance re-opening anytime soon. The only good news was that while the tunnel was closed the site was free. 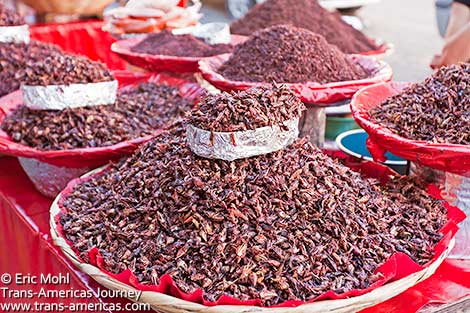 After touring the ruins we sat down at one of the bars nearby and had a cold beer and a bag of chapulines–fried, salted, and spiced tiny grasshoppers. They are crunchy and salty and quite tasty. It’s also a fitting snack since images of grasshoppers are a feature of the archaeological site and a ubiquitous snack in Cholula. 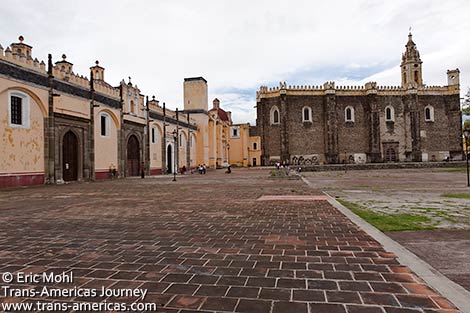 The relatively subdued exterior of Tonantzintla church gives no hint of the ornate decorations inside.

We did not visit all of the churches in Cholula, but we did tour a couple more including the Tonantzintla church where the ceilings and most surfaces inside the church are encrusted with elaborate decorations featuring brown-skinned angels. 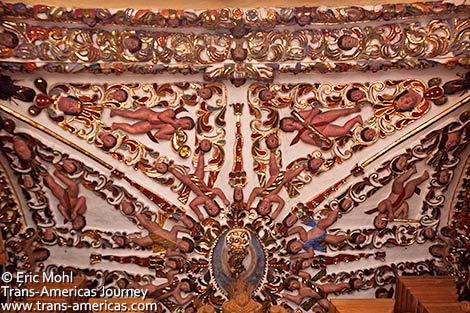 Created by local indigenous groups, the interior of the Tonantzintla church features depictions of brown-skinned angels instead of the all-white iconography in Spanish-built churches.

The church was created by local indigenous groups and some think they may have been trying to create their own version of the Rosary Chapel in the Church of Santo Domingo which the Spanish built in Puebla and which features only light-skinned imagery, of course. You can see a photo of the Rosary Chapel near the bottom of our city travel guide to Puebla. 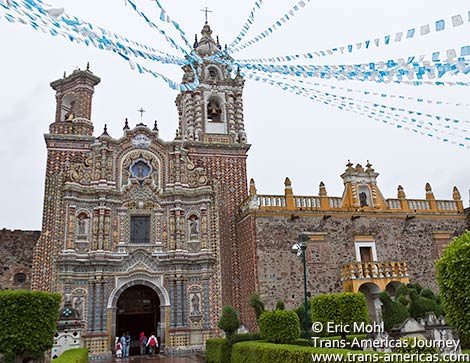 We arrived at San Francisco Acatepec church as the congregation was preparing for baptisms. Streamers were up, the cleaning ladies were out in force, and an artist was putting the finishing touches on sand and glitter “paintings” covering the floor from the door to the altar. 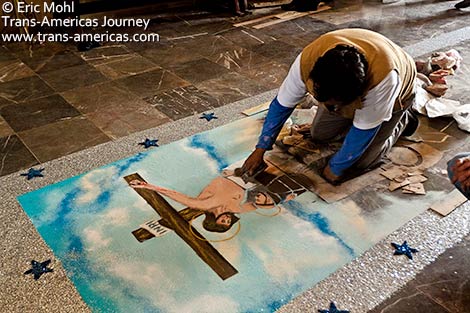 An artist working on sand and glitter “paintings” on the floor of the San Francisco Acatepec church in preparation for a baptism ceremony.

Cholula also offered an unexpected attraction, a place called Container City which is a collection of old shipping containers that have been re-purposed as hip cafes, cool clothing stores, and bars. It’s a big hit with the many college students in the city. 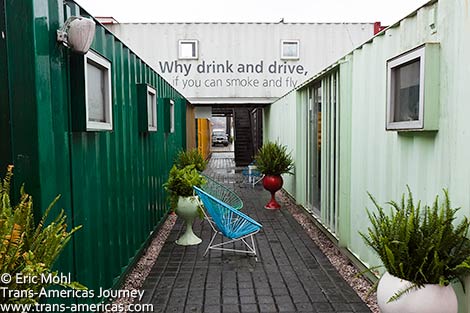 Container City in Cholula has turned a collection of old shipping containers into a hip hangout full of shops, cafes, and bars.

Where to eat and drink in Cholula, Mexico

In addition to fried grasshoppers and a snack at a cafe in Container City, one night we popped into the Reforma bar (the oldest in town), where someone obviously has a Marilyn Monroe fetish. Just be warned: If you order a sangria at Reforma (it’s one of their specialties) don’t expect the Spanish kind. This sangria is shockingly sweet and made by combining a brown liquid, a clear liquid, and just a splash of very cheap, very sweet red wine.

Where to sleep in Cholula, Mexico

Cholula is divided into two areas: San Andres and San Pedro. San Andres has most of the attractions and tourist facilities including La Quinta Luna boutique hotel. Built in the 1900s, the current owners spent two years restoring it retaining as many of the original details and materials as possible. Now it’s a 10 room find filled with art around a relaxing central courtyard garden. The hotel restaurant is worth a splurge and they recently opened a spa treatment room.