A rare copy of the Nuremberg Chronicle, amazing architecture (if you’re into tile, book your trip now), revolutionary history, outstanding museums, plus a saint dedicated to drivers and roads. It’s all part of the rich culture of Puebla, Mexico and it’s all in our city travel guide (plus two great hotels). 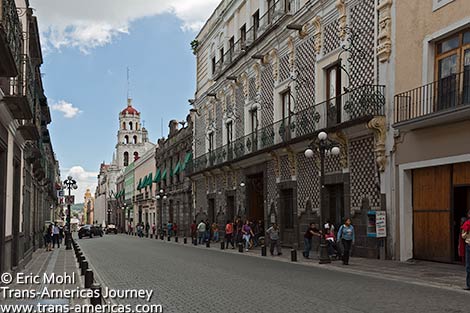 A stroll-inspiring street in Puebla, Mexico.

The culture of Puebla, Mexico

The historic center of Puebla is a UNESCO World Heritage site. It’s a gorgeous city with wide, relatively traffic-free streets that invite strolling. When we were there the city government was converting more streets into pedestrian malls and that’s a good thing. Many buildings in Puebla exhibit gorgeous Spanish colonial architecture and are adorned with the area’s famous colorful and intricate Talavera tile (also known as Talavera Puebla). It’s difficult to keep your eye on street traffic when there’s so much beauty around you. 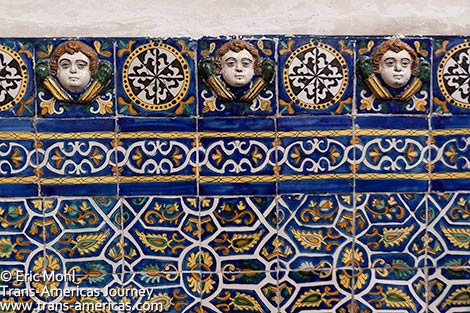 Tile lovers will go nuts in Puebla where there are ample examples of old tile work in the city’s historic buildings and opportunities to buy newly-crafted tile masterpieces for yourself. 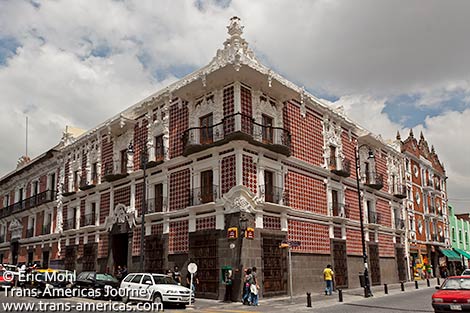 The Casa de Alfeñique is named after Alfeñique candy which is white and fluffy like the meringue-like mortar work on the outside of the building. 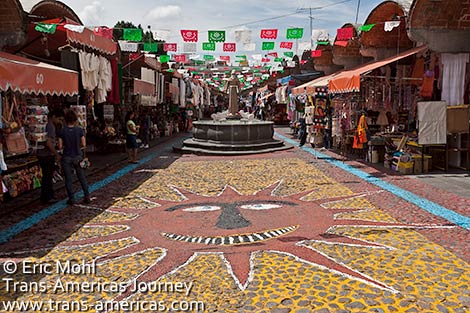 The El Parian arts and crafts market in Puebla is where you can find fairly high-quality souvenirs and original art work. 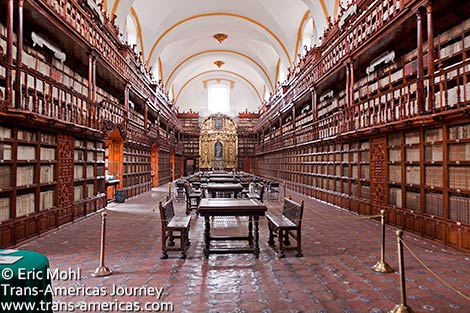 The Biblioteca Palafoxiana in Puebla is home to a rare copy of the Nuremberg Chronicle and (more) gorgeous tile and architecture.

It’s not every day that a visit to the library is a highlight. However, the Bibilioteca Palofoxiana (Palofoxiana Library), which has been nominated for inscription as a UNESCO Memory of the World project, is not an everyday library. Started in 1646 by the powerful Palafox family (anyone who’s read James A Michener’s excellent “fictional” epic Mexico will recognize that name), the library now houses more than 41,000 books including an extremely rare copy of the Nuremberg Chronicle.

You can’t actually sit down and thumb through this illustrated history of the world from the 1400s, but it feels cool just knowing it’s there. The library, which is located inside a weirdly nondescript larger building, is a wonder to look at too with more amazing tiles and gorgeous floor-to-ceiling bookcases. 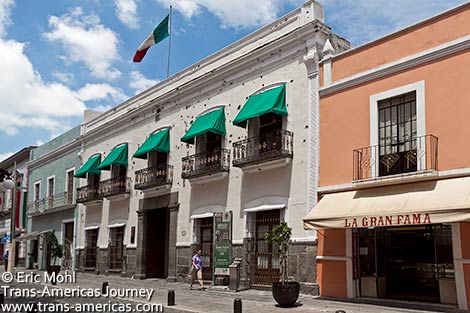 The home of Aquiles Serdán is now the Museo de la Revolución, complete with bullet holes in the facade.

You could spends days just looking at the exteriors of buildings in Puebla, but many of the most interesting structures also house interesting museums, like the home of Aquiles Serdán which is now the Museo de la Revolucion (Museum of the Revolution). This home, said to be where the revolution began in 1910 as evidenced by the bullet holes that riddle its facade, is full of fascinating remnants of the Serdán family’s life including relics of the revolution and what’s left of the family’s shoe business.

Other museum highlights in Puebla included the Museo Amparo where a world-class collection of Meso-American, pre-Columbian and colonial art is excellently displayed and even laid out along a kind of parallel timeline showing the type of art coming out of various parts of the world during the same time periods. Lots of English too. Fascinating. And the gift shop is excellent.

NOTE: when we were in Puebla the Cocina y Ex Convento de Santa Rosa (Kitchen and former the Santa Rosa Convent), where the region’s famed mole is said to have been invented by nuns desperately trying to create something that would please a picky bishop, was closed for renovation. Pity. 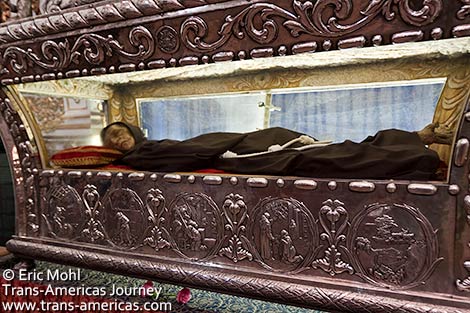 The remains of beatified Sebastian de Aparicio, the patron of roads, drivers, and travelers, are in the San Francisco Church in Puebla. For road-trippers like us, a visit is a mandatory stop.

Sebastian de Aparicio was a farmer turned monk who worked for 10 years to build 466 miles of road connecting what is now Mexico City with what is now Zacatecas. He was beatified in 1787 and his remains are in the San Francisco Church in Puebla where he has become the patron of roads, drivers, and travelers.

Yes, it’s a little weird hanging out with a dead guy (however well-preserved), but we could use some patronage on the road, so we paid Sebastian a visit. We even picked up a pendant (which still hangs from our rear view mirror) and a small sticker with a copy of the driver’s prayer (which is on our windshield). 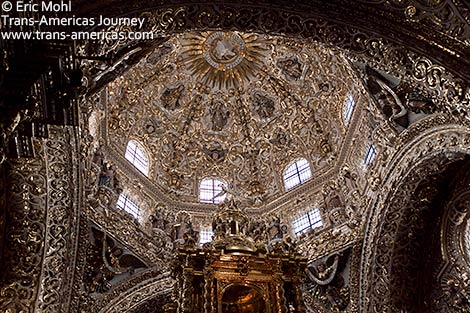 Where to sleep in Puebla, Mexico

One of the city’s amazing buildings, a mansion built in the 1600s, is now (after four years of restoration and re-creation) a boutique hotel called Casona De La China Poblana. Owner Gloria Santos has brought the 10 suite hotel back to life with architectural integrity jazzed up with shots of modern art and full-service touches like complete breakfasts included in room rates, a pod coffee maker for use at any time, and complimentary sodas and water in the mini-fridge.

Gloria, by the way, is also the creator of the equally magnificent Casona De La Republica boutique hotel in Queretaro.

Casona De La China Poblana is named after one of Puebla’s most unusual inhabitants. Legend has it that an 11-year-old girl from India named Mirra was sold into slavery, eventually ending up in what is now Puebla. But the journey to Mexico took so long that by the time she arrived the man in Puebla who was supposed to be her “master” was dead. The so-called La China Poblana (she was not Chinese–China was a word commonly used in Mexico to refer to anyone of Asian descent) was adopted by a local family and was then given to the owner of the mansion that is now the hotel.

La China Poblana worked for the man as a slave before becoming a nun. La China Poblana became a heroine of piety and modesty and when she died she was buried in the Templo de la Compañía de Jesús church across the street from the hotel.

The view from the rooftop bar and lap pool at La Purificadora hotel neatly marries the historic architecture and the new style of Puebla.

Amidst all the history in Puebla lies one thoroughly modern standout: La Purificadora boutique hotel. The hotel, built into what was a water purification plant, opened in 2007 and we’ve been dreaming of seeing it ever since. Its geometric angles, bold use of the color purple, ingenious water features, an enormous and sort of terrifying glass staircase, and gorgeous staff still look and feel completely hip and modern.

Check out the second part of our city travel guide to Puebla for travel tips about food in Puebla including chiles en nogada and a cooking class at  the Mesones Sacristia hotel and restaurant where we learned how to make a version of the region’s famed mole.

For a fun musical take on the city of Puebla, check out our previous post about the band moe.’s song about Puebla.