Christmas, as you might expect, is a big deal in Mexico and the season stretches all the way to January 6, aka Three Kings Day, which is such a important day that it has its own cake which might make you forget fruitcake forever. We saw a doozie in Guadalajara. 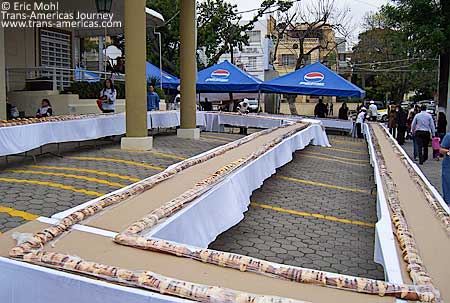 Part of the quarter mile long rosca de reyes cake baked every year by chefs-in-training at the Colegio Gastronomic Internacional in Guadalajara.

Some children get their Christmas presents on Three Kings Day (not December 25), and the day is also celebrated with its own special Christmas cake called rosca de reyes. Ideal Bakery, a particularly massive and popular bakery in Mexico City, actually shuts down production of all other goodies in the days leading up to January 6 and focuses exclusively on churning out tens of thousands of rosca de reyes cakes which are duly gobbled up by the masses.

In Guadalajara the Colegio Gastronomico Internacional charges its budding chefs with the task of baking a rosca de reyes that measures 1,500 feet (500 meters) long. That’s more than a quarter mile of Christmas cake! This we had to see. We have to admit we were a bit disappointed to discover that it’s not one continuous cake, but a series of 3 foot (1 meter) long sections lined up end to end. However, it tasted great and went perfectly with the mugs of hot chocolate they were also handing out.

A warning about the good old rosca de reyes, however. Each and every one is loaded with white plastic representations of the baby Jesus (inserted after baking so they don’t melt), like a King Cake from New Orleans. If your piece of the cake contains a plastic baby Jesus, you could break a tooth plus you’re responsible for throwing a party on February 2 at which you must supply tamales for everyone. 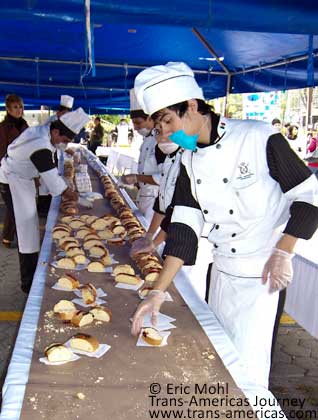 Serving up the 1,500 foot long rosca de reyes baked by chefs-in-training at the Colegio Gastronomic Internacional in Guadalajara.

Want the recipe? Check out the piece we did for TheLatinKitchen.com about this epic Christmas cake which includes the official recipe from the Colegio Gastronomic Internacional.