WAY Off the Train – Villages of the Copper Canyon, Mexico 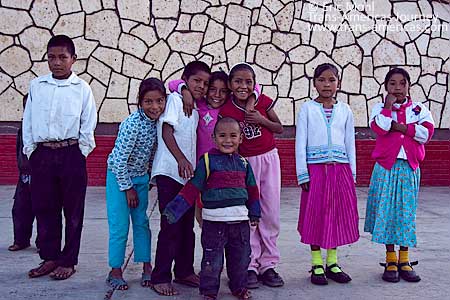 Tarahumara children at school in the Copper Canyon village of Cuiteco.

After leaving our truck with friends we got back on the good old El Chepe Copper Canyon train, but only long enough to get to the town of Cuiteco where it was pretty much immediately clear that this small town doesn’t see much in the way of tourists.

We, along with Dave Hensleigh from Authentic Copper Canyon, checked into the lone hotel in town (though a new guest house called Mirador de Cuiteco is nearing completion) which is owned by members of the Balderama family and was built and furnished with cast-offs from the upscale chain of Balderama Hotels. The place was like a graveyard for 1970s hotel furnishings–mostly in a good way.

An unexpected dash of fancy hotel service may be the most successful hand-me-down here. Despite the fact that we were the only guests in a budget guesthouse in a tiny town, we returned to our room after dinner and discovered that someone had lit the fire in our fireplace while we were out. Lovely. 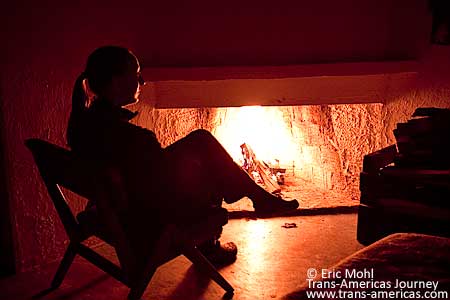 Karen keeping warm by the fire in our room in Cuiteco.

Wandering through town, friendly inhabitants showered us with greetings and though it would be hard to say that anything of note actually goes on in Cuiteco, the peacefulness (and short walk to a lovely waterfall and swimming hole) is reason enough to spend a day if you’ve got the time. 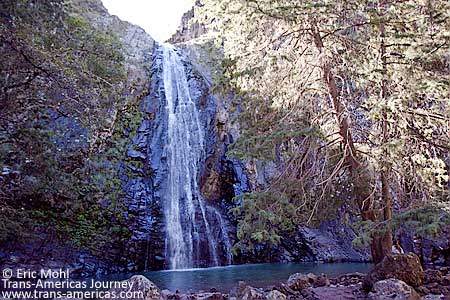 A scenic one hour (one way) hike from Cuiteco (take a guide, there are tricky turns) brought us to this waterfall and swimming hole. Regretfully, the morning we were there it was too chilly to jump in.

The next morning Alberto Lopez picked us up in Cuiteco for the short drive to Cerocauhi and that’s about when the laughing started. This guy is great. He knows the area, speaks excellent English, and loves to have a good time whenever possible. He was so much fun that we basically didn’t stop laughing for the rest of the day as Alberto showed us around. 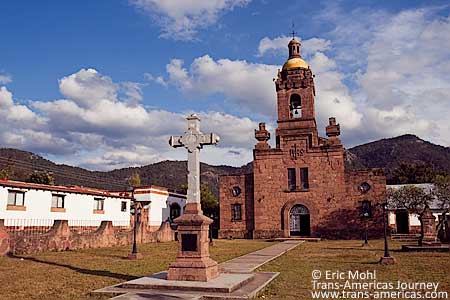 San Francisco Javier de Cerocahui church in Cerocahui, a village in the Copper Canyon. Don’t miss the hysterical “English” translation of the story of the church in a frame by the front door. 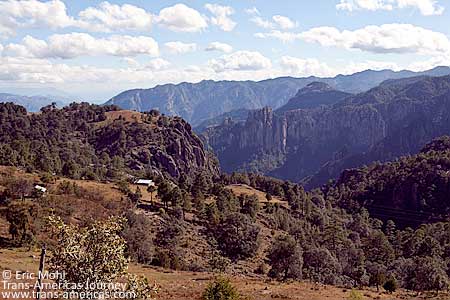 First stop: Gallego viewpoint above the town of Cerocahui. Here we got amazing views down into Urique Canyon (the deepest in the Copper Canyon network). From where we stood at the viewpoint which was currently undergoing a major upgrade with proper bathrooms, new vantage points and more guardrails, the Urique River and the town of Urique looked comically small at 4,300 feet (1,310 meters) below us. 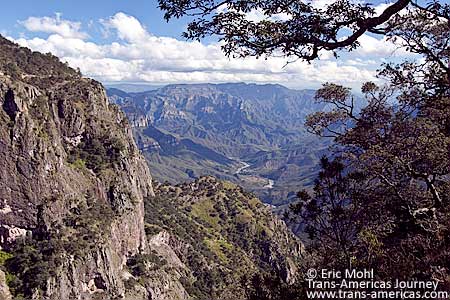 The Urique Canyon and the town of Urique way down at the bottom.

After the viewpoint Alberto expertly navigated us down the twisting, turning dirt road that switchbacks to the bottom of the Urique canyon. It’s not the hairiest road we’ve ever been on, but the drops are dramatic and there’s not a guardrail in sight. Oh, and it descends about a mile in elevation in the space of just 15 miles (24 km). 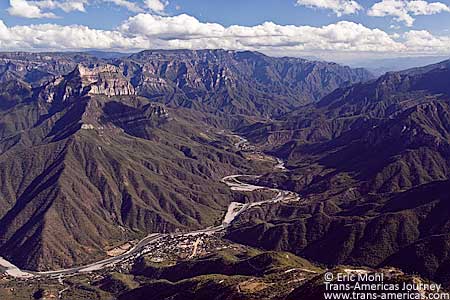 The Urique canyon as seen from the Gallego viewpoint with the Urique River and the town of Urique 4,300 feet below.

By the time we reached the bottom, we were starving and Alberto knew just the place to go: Restaurante Plaza on the main drag (you can’t miss it–the restaurant is hot pink). He also knew what to order: a cold beer (for everyone but him) and matates (stone bowls also used for grinding) filled with a dish called aguachile.

No, it’s not just chile water as the name would imply. This stunner is a kind of thin, spicy Mexican tomato soup absolutely full of peeled fresh shrimp. We each must have had nearly a pound of shrimp apiece and, yes, we ate them all. Not bad for around 70 pesos (about US$3.75). 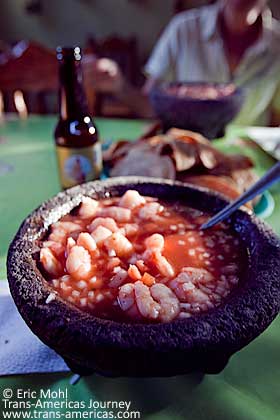 The steep and windy drive down into the Urique Canyon was rewarded with a meal of aguachile in the town of Urique.

The drive up and out of Urique proved easier than the drive down and soon Alberto had us back in Cerocahui where we checked into his shiny new guest house called Hotel Centro Jade right on the town square (look for Alberto or his wife Francia at the Bahuchivo train station and they’ll whisk you off to paradise). We can recommend it because it’s spotless, economical (about 500 pesos / US$27 for a room that will sleep up to four people), and comfortable. Each room even has its own small patio. And you can’t beat the hosts! 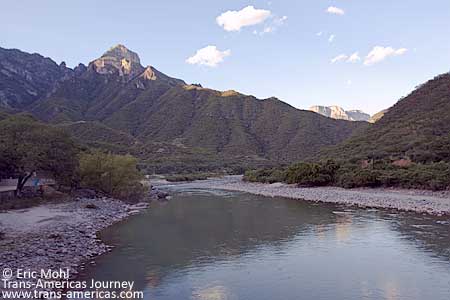 The next morning Francia, along with their elated yellow lab, took us on a short hike to a nearby waterfall that tumbles through a natural bridge in the rock face. We don’t own a dog (except for Grady, but he’s stuffed and doesn’t hike well). However, a well-behaved dog like Muñeco (which means “little doll”) always makes a hike better with its full-throttled glee.

Near the trailhead to the waterfall, we also got a glimpse of a new zip line that has been put up. Sadly, the man who operates it was out of town so we couldn’t take a ride. 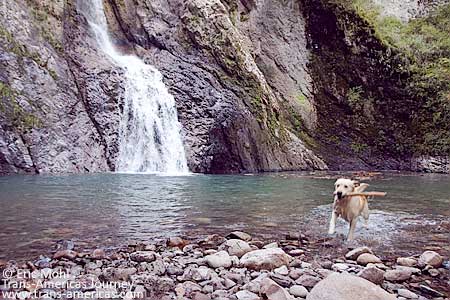 Alberto and Francia’s lovely dog, Muñeco, made our hike to a waterfall near their guesthouse in Cerocahui extra special–and extra damp. 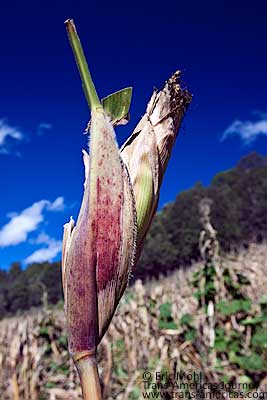 Blue corn, a staple of the Tarahumara diet, left to dry on the stalk.

After our morning walk, it was time to get back on the train at nearby Bahuichivo station and head for the town of Temoris. Temoris is a mining town that very, very few people ever visit. However, we discovered a lovely place to stay (the Nuevo Hotel) and a great place to eat (Gaby’s). We also found geologists exploring the area for mining potential (hi Larry and crew) and they were all happy to show and tell us about their work. If you’re into rocks, this is the place for you! 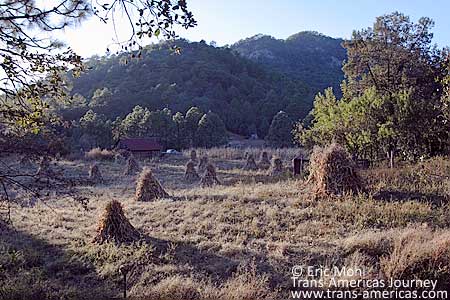 Corn stalks drying in the sun near Temoris. 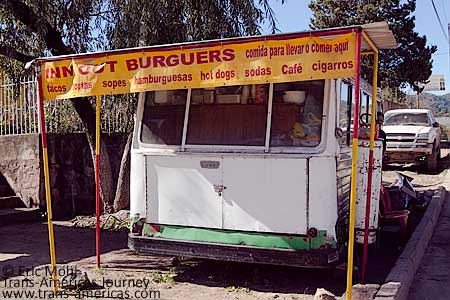 We love us some In-N-Out Burger, but something doesn’t seem quite right about this one in Temoris… 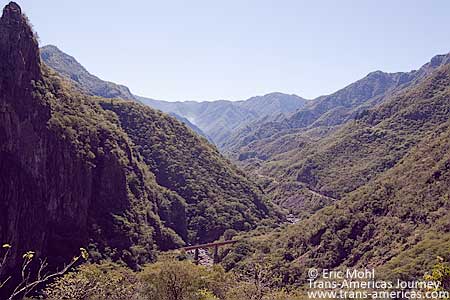 Part of the U-shaped train bridge at the Temoris station as seen from the road that winds up the valley to the town of Temoris.