You’ve got to hike through a steep and sometimes extremely muddy trail to reach the high-altitude valley at the foot of the El Altar Volcano in Sangay National Park in Ecuador. Those who decide to go hiking to El Altar Volcano are rewarded with pristine páramo landscape, volcano views, and the chance for a very close encounter with a very big bird. Get going with our El Altar hike adventure travel guide. 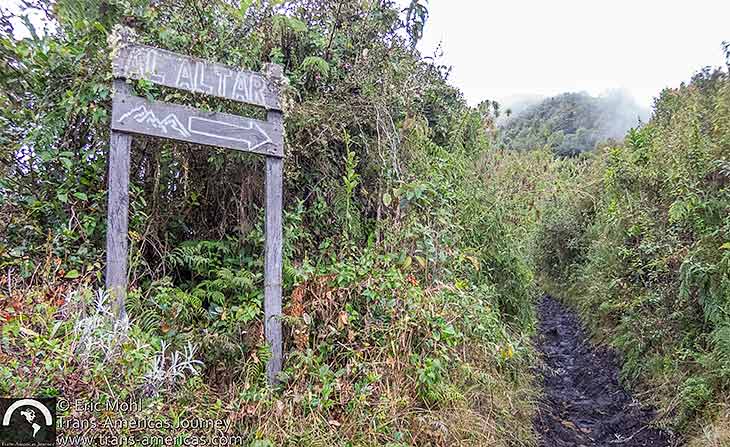 The trail up to El Altar Volcano was muddy pretty much from the start and it only got worse from here.

Not far from the city of Riobamba is Sangay National Park. Clocking in at just shy of 2,000 square miles (5,177 square km), it’s the largest national park in Ecuador. It was designated a UNESCO World Heritage site in 1983 thanks to the complex mix of habitats in the park (grasslands, glaciers, wetlands, rainforest, and páramo) plus its three volcanoes (two of them active).

The largest of those volcanoes is El Altar. At 17,451 feet (5,319 meters) high, this extinct volcano is a stunner with a ring of nine jagged peaks (which the Spanish thought looked like friars in church, hence the name) and its own crater lake. For now, there’s only one way to get there. 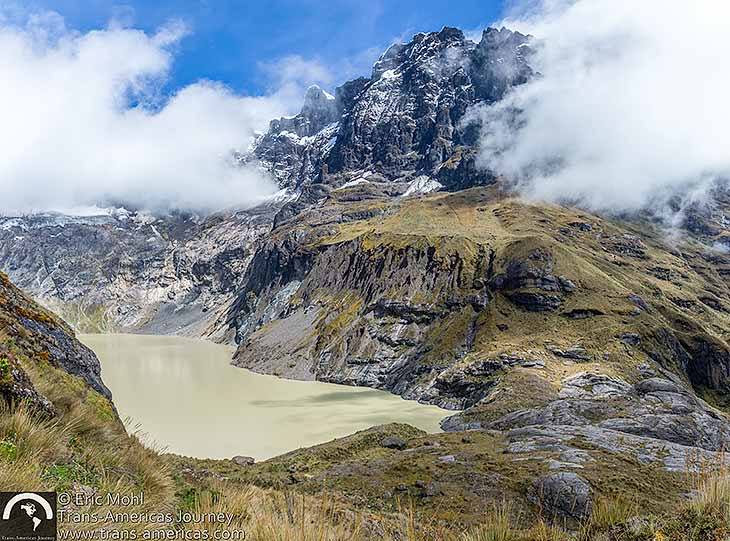 Yellow Lake in the crater of the dormant El Altar Volcano in Ecuador.

Our El Altar hiking adventure began at Hacienda El Releche where generations of the same family have worked the land, ranched cattle, and built the farmhouse where charismatic, bull-riding, English-speaking brothers welcome overnight guests and arrange the logistics of hikes up to their bunkhouse at El Altar.

Hacienda El Releche is a rustic, cowboy kind of a place with dorm rooms and some private double rooms. Decor amounts to cow skin rugs, lamps made out of horseshoes, hard mattresses, and gaps in the walls where the wood has warped or shrunk over time. But there’s electricity and hot water and an inviting porch with hammocks and plenty of peace and quiet. 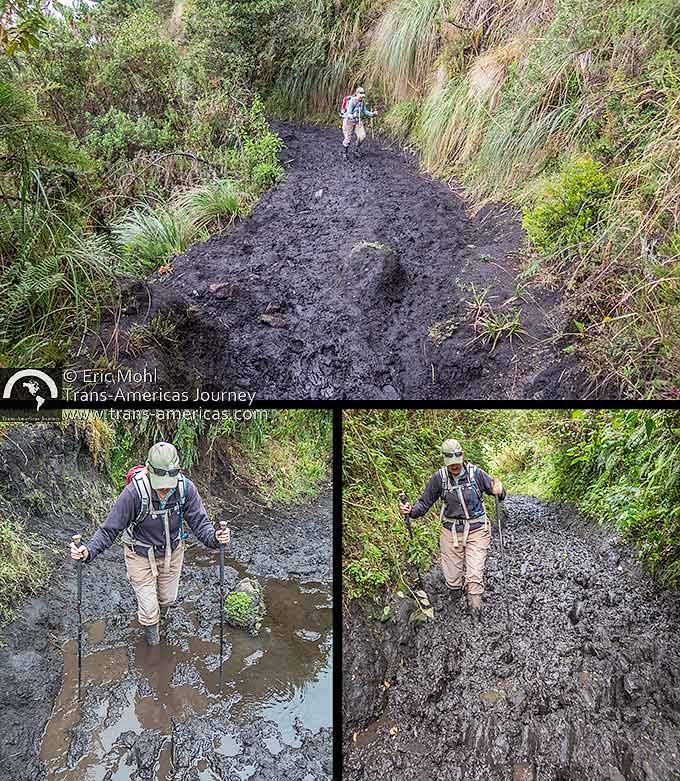 Mud, mud, and more (even deeper) mud on the trail up to El Altar Volcano in Ecuador made us wish they made thigh-high rubber boots.

Early in the morning, we started out on the 6-mile (11 km) trail to El Altar along with a mule man, two mules carrying supplies, and a few dogs. This trail passes through more of the family’s vast property and during the first two hours on the trail we traveled steeply up through many muddy sections. In some areas, the mud was so deep (almost over the top of our rubber boots) that it threatened to suck our boots off and we had to grab trailside branches to help pull ourselves up and out. It was slow, tough going. 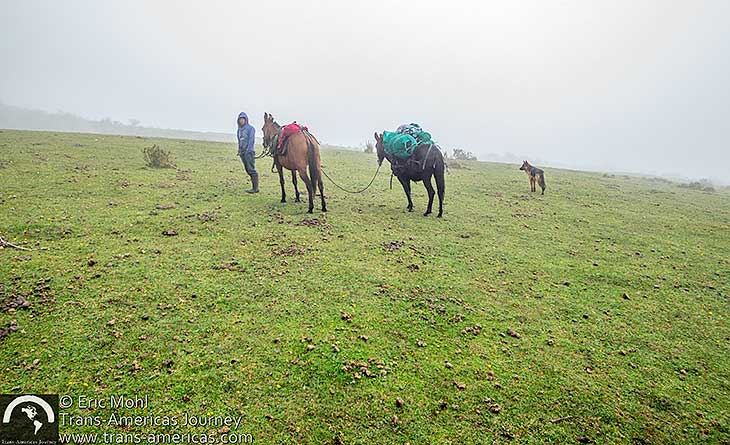 With the worst of the mud behind us, we stopped with our pack animals and mule man to enjoy the foggy, cold, paramo landscape.

We finally reached a plateau and had gained enough elevation for páramo landscape to take over which meant less mud on the trail and more clouds and fog in the air. We walked for another 2.5 hours along a trail that descended and ascended repeatedly before reaching the Refugio Capac Urcu bunkhouse (named for the traditional name of El Altar) at 11,150 feet (3,400 meters) in the Collanes Valley at the foot of El Altar volcano.

Check out the cloudy beauty in the valley leading up to El Altar Volcano in our video, below.

Persistent clouds and ground fog in the wide, stark valley that anchors the towering El Altar Volcano meant that we rarely saw more than a tantalizing sliver of the bottom fringe of the glacier clinging to the volcano’s rocky peaks. 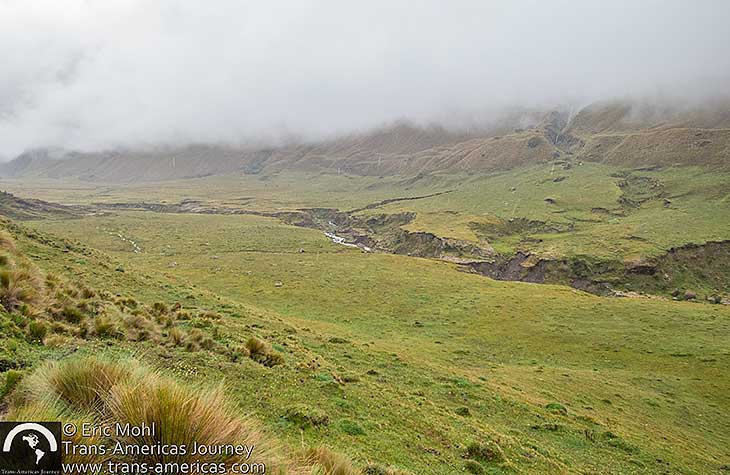 After unpacking our food supplies, sleeping bags, and other essentials from the mules, we settled into Capac Urcu which has a very large shared kitchen with running water and a gas stove, a large living and dining room with a fireplace, and multiple buildings offering dorm rooms, private rooms, and cold water bathroom facilities. 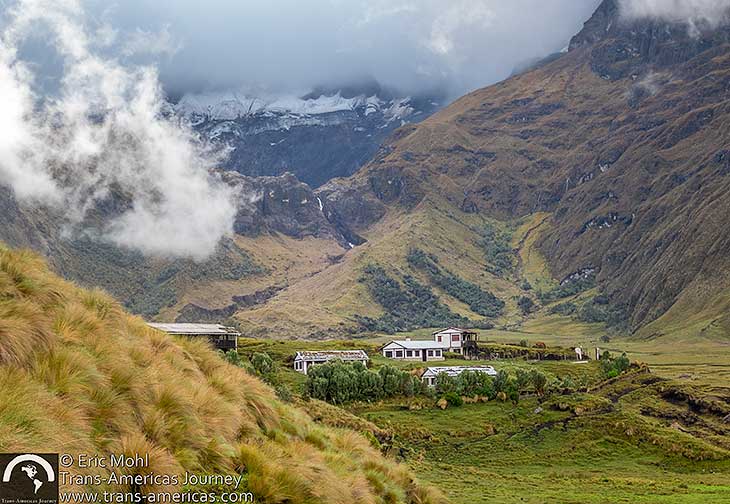 Refugio Capac Urcu in the valley at the foot of El Altar Volcano.

There’s no electricity, but there is a solar panel that provides power for charging batteries and a satellite phone for emergencies. The family started building the Capac Urcu facilities in 2001 and everything, from wood to toilets to furniture, was brought up that steep and muddy trail by mules. 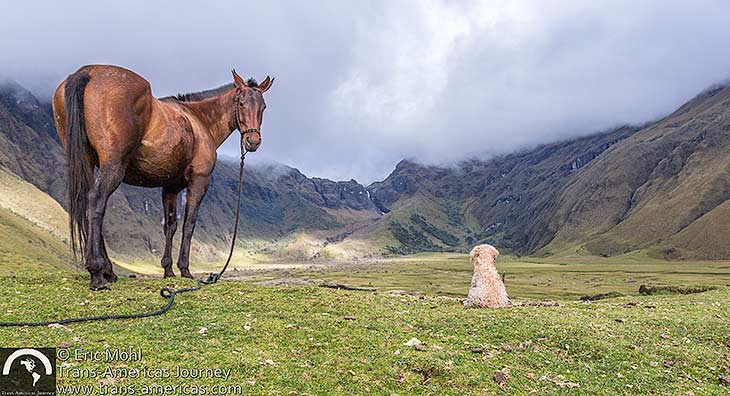 There are no roads up to Refugio Capac Urcu (for now), so everything has to be brought up on your back or by hard-working horses and mules.

After a cold night, we got up early, made breakfast, and headed out toward Yellow Lake, the crater lake in the collapsed cone of El Altar. However, there are no clear trails through the swampy, low-lying páramo (you’ll be thankful for your rubber boots up here too). Somehow, we failed to find the correct trail and ended up bushwacking through páramo and polylepis trees before finding a better route and joining a trail that seemed to be right. 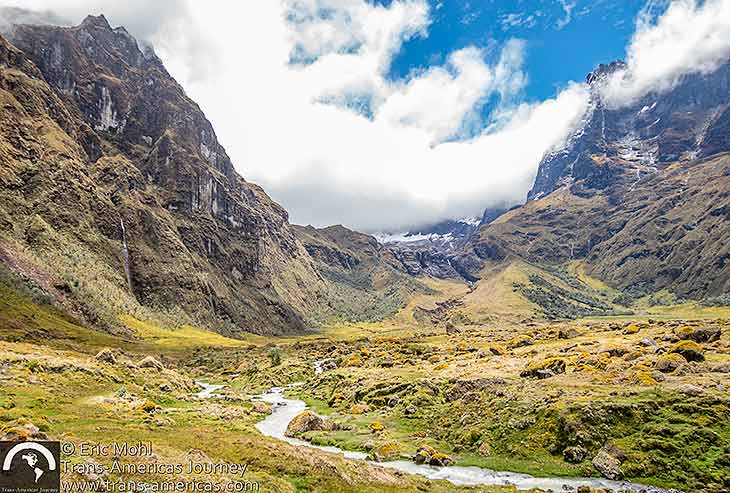 Hiking up the valley beyond the Refugio Capac Urcu toward El Altar Volcano (again covered in clouds).

A very close encounter with a condor

This area is home to deer, puma, rabbits, many types of small birds, and one of the largest birds in the world: the endangered Andean condor. They nest and hunt in the area and we’d seen a few of them circling in the sky above us. 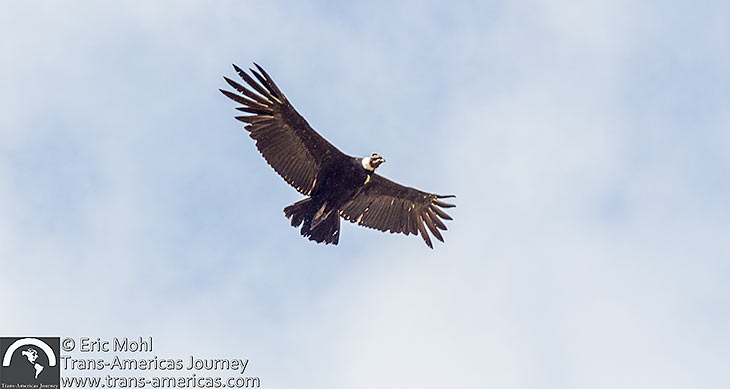 We saw a few Andean condors circling above us, but nothing prepared us for the very close encounter we had with one of these massive, endangered birds.

We continued up, up, up the trail that we presumed would take us to Yellow Lake. When we stopped to take a break on a ridge with views down to the lake and down the valley we’d just hike up and, a condor circled by at just about eye level. To our surprise, it came closer and closer until it was circling just a few feet away.

Check out our very close encounter with a condor in our video, below.

When the condor moved off, we continued along the ridge for views of Yellow Lake in the crater below, then we hiked back down the way we’d come up. The next morning, we packed up and returned along the same trail back down to Hacienda El Releche. In this direction, the hike took about four hours and the final stretches of the trail were still very muddy and slippery. 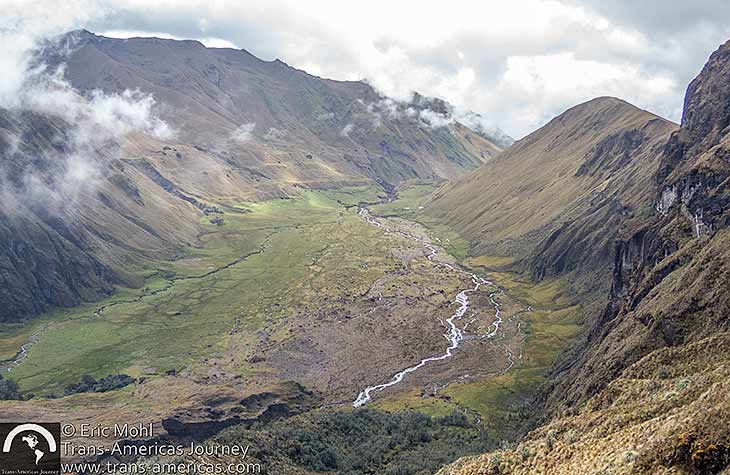 Looking down the valley from a ridge near Yellow Lake during our hike to El Altar Volcano.

What to bring on your El Altar hike

At the time of writing, rumors about a plan to spend millions to pave a road up to El Altar Volcano were still swirling around. For now, the only way to get to El Altar is to trek up and the area is so beautiful (and such a slog to get to) that you’ll want to spend at least two nights at the bunkhouse at the base of the volcano. Here’s what to bring with you. 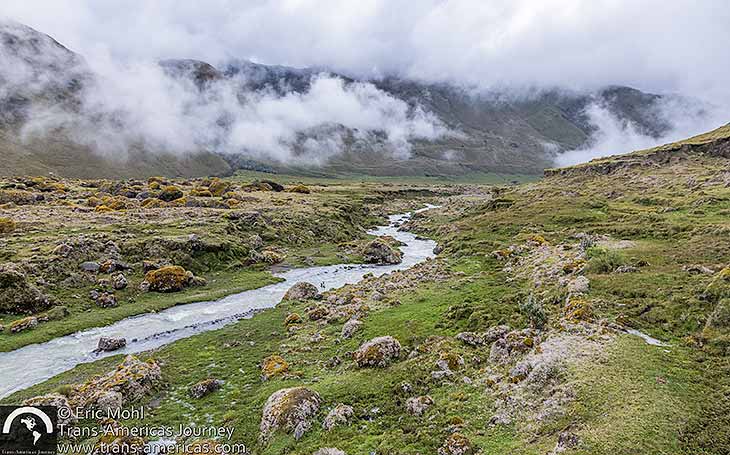 Paramo landscape in the valley at the base of El Altar Volcano in Sangay National Park in Ecuador.