More than 300,000 people (including us) enjoyed the sixth Lollapalooza Music Festival in Argentina. We saw bands we know and bands that were new to us and Eric shot more than 5,000 photos. Here are our favorite shots and top highlights from Day 3 of the Lollapalooza music festival in Buenos Aires, Argentina including very diverse musical performances from Greta Van Fleet, Lenny Kravitz, Kendrick Lamar, and Odesza. You know we love live music and we’re willing to travel for it, so let’s go. 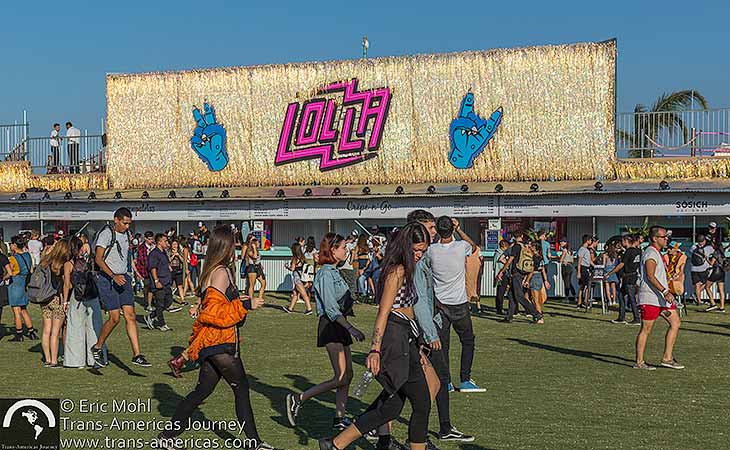 Welcome to the Lollapalooza Argentina music festival in Buenos Aires.

The final day of Lollapalooza Argentina brought two huge highlights for us: finally seeing Greta Van Fleet live and seeing our friend Bronko who was on the road with Odesza. 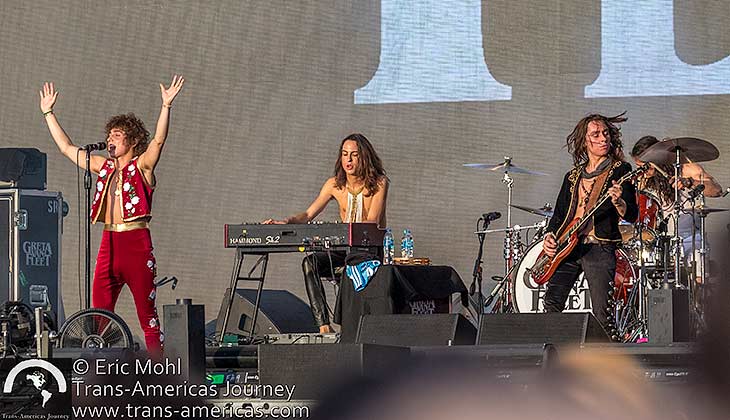 We finally got to see Greta Van Fleet perform live.

Best of the fest: Greta Van Fleet is arguably one of the buzziest bands in the world right now. Even if you think they’ve drunk a little too deeply at the well of Led Zeppelin if you love blues driven straight up rock you’ve got to give them some props. Three brothers handle bass, lead vocals, and guitar while a buddy keeps pace on drums. Though they weren’t even born until the ’90s, there is an undeniable ’70s throwback flair to their look and their sound. As Eric points out, if they’d come up in the ’80s or ’90s the market may have rejected them (too much too soon). Today, however, their package is very appealing. 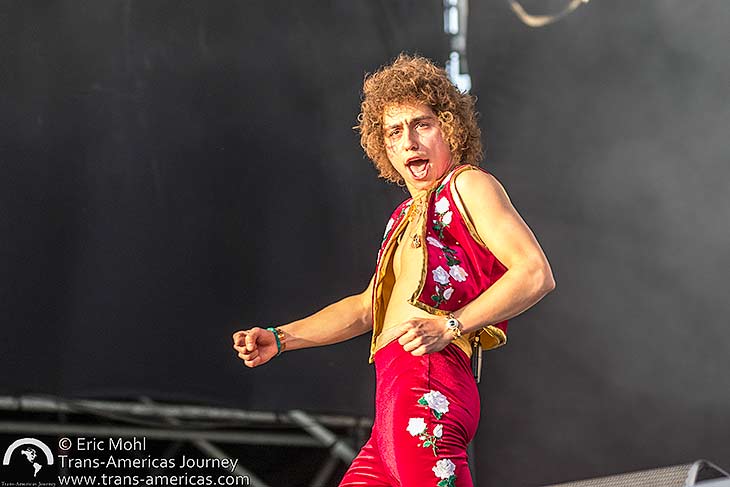 Josh Kiszka giving it all he’s got during Greta Van Fleet’s set at Lollapalooza Argentina. We love the outfit which seemed like a nod to tango and a nod to Zeppelin.

What’s also appealing is the fact that Greta Van Fleet is at the start of their journey and they still seem legitimately amazed by what’s happening to them. Lollapalooza Argentina was the largest festival they’ve played so far and they were delighted to be there. That legit joy may not last forever, but for now, the band’s got it and it’s as infectious as their songs.

Family affair: Caetano Veloso (second from left in the photo above) is a Brazilian bosa nova/folk rock singer and co-founder of a style of music called Tropicália. He’s also won nine Latin Grammy Awards and two Grammy awards. He brought a bunch of talented family members with him to Lollapalooza to form a kind of super band called Caetano, Moreno, Zeca & Tom Veloso. 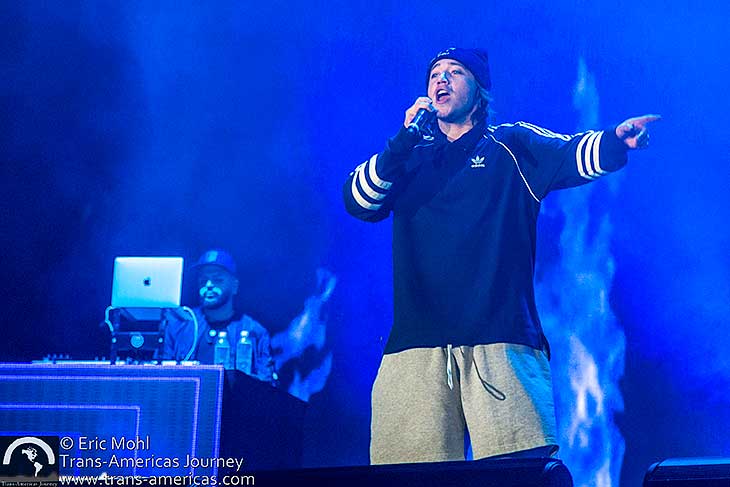 Rap is rap in any language: Argentinean rapper Paulo Londra was inspired by Eminem’s movie 8 Mile and is now one of the most popular Argentinean musicians on Spotify in addition to a long list of other regional awards. 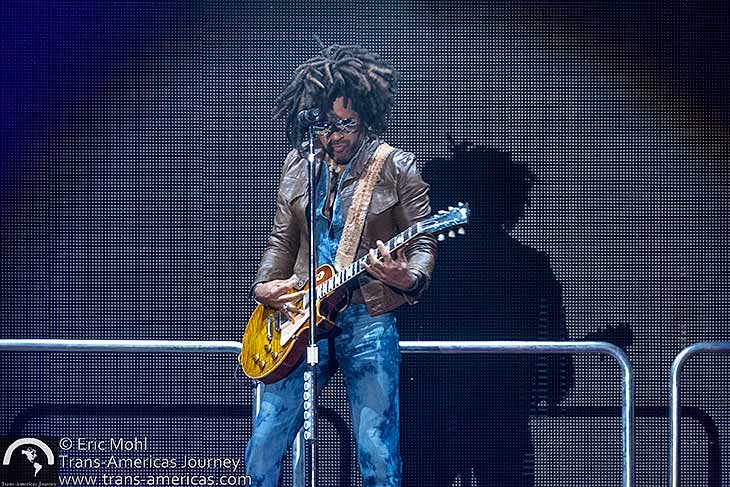 The hits just keep on coming: Honestly, we were really happy that Lenny Kravitz played a set that was packed with his greatest hits, and there are a lot of them. He opened with “Fly Away” and also rolled out “American Woman,” “Are You Gonna Go My Way?, “Let Love Rule, “It Aint Over ‘Til It’s Over”, “Mama Said” and many more. 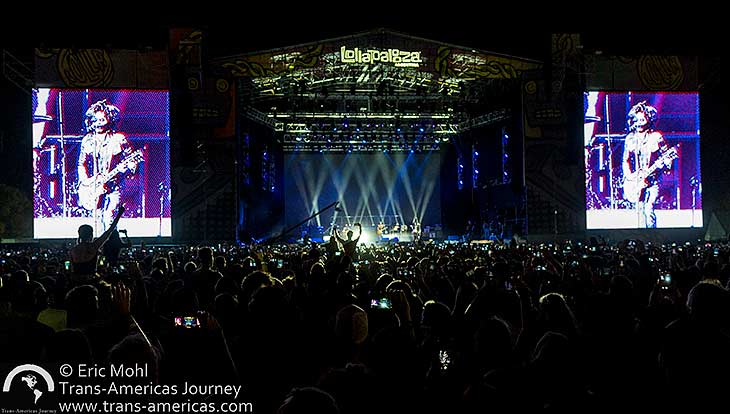 The Lollapalooza Argentina crowd knew every word to every Lenny Kravitz hit.

The crowd loved it all and many were singing at the top of their lungs. Lenny loved that and spent some time in the crowd handing out free hugs. We also loved that Lenny’s band included an extremely badass chick bass player/singer. All in all, it was a love fest. 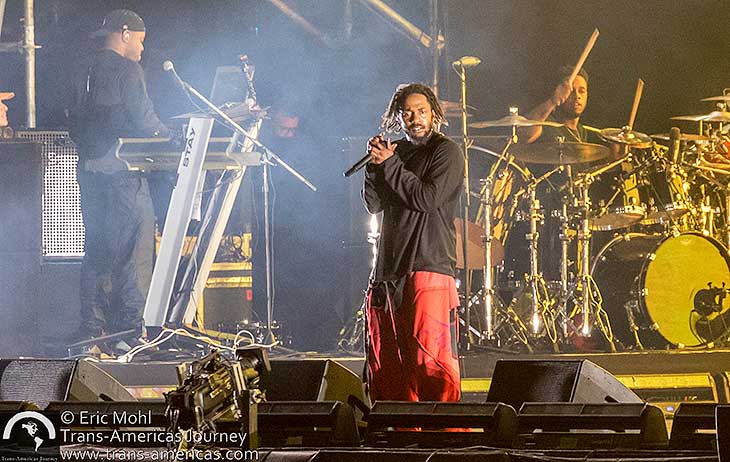 Not having it: Things generally ran like clockwork during the festival with bands on and off their stages at the prescribed times. However, Lenny played past his slot and that meant that his show on Main Stage 2 was audible at nearby Main Stage 1 where rapper Kendrick Lamar was set to start. Lamar was not about to postpone his start time, so he just cranked it up and got going. This created a kind of sound war between the stages for a short time until Lenny finally wrapped it up. Something else Lamar was not having? Photographers. He was the only Lollapalooza Argentina artist who did not allow any professional photographers at all in the pit during his show. 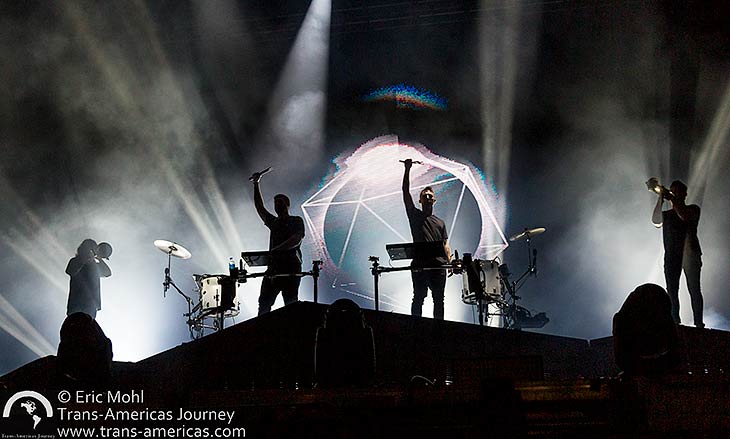 The boys of Odesza and a pair of horn players kicked off the band’s sensory overload (in a good way) set at Lollapalooza Argentina.

EDM for the rest of us: Confession time: we do not love electronic dance music. We do, however, enjoy live performances from Odesza and not just because our friend Bronko is the band’s tour manager. 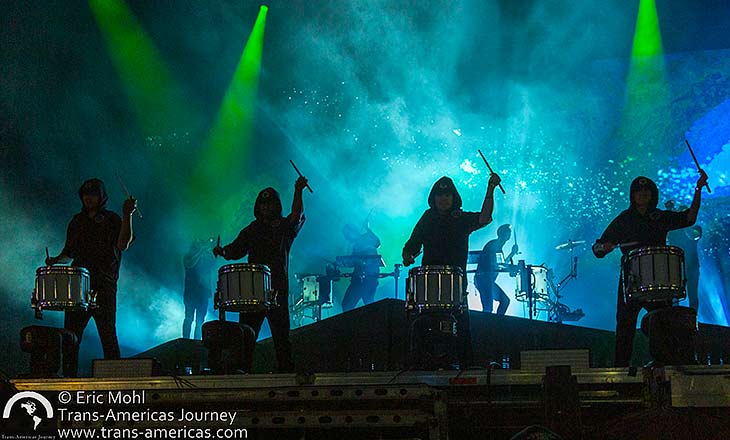 Just one of many powerful moments supplied by the talented drum corp that’s part of the Odesza live experience.

For us, it boils down to two things. The first thing is actual live music being played on the stage thanks to a pair of horn players and a troupe of amazing drummers who are precise and powerful in their playing and in the stark choreography they perform. The second game changer for us is lyrics, thanks to more live performances from singers on stage and/or singing tracks recorded for the band which consists of the dynamic duo of Harrison Mills (aka Catacombkid) and Clayton Knight (aka BeachesBeaches). 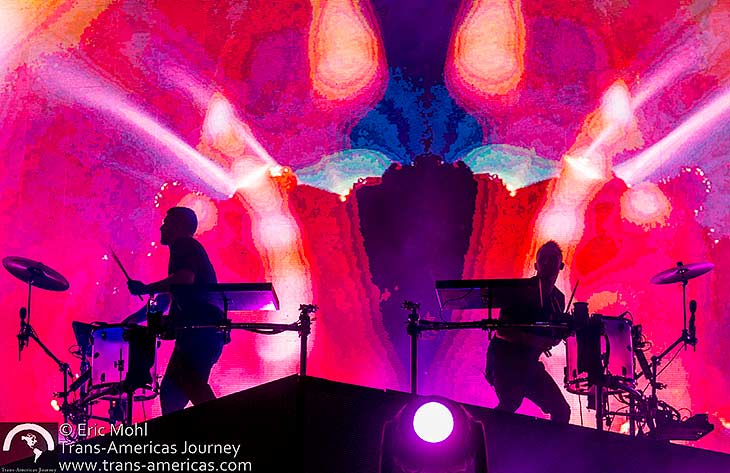 Harrison and Clayton, the heart and soul of Odesza.

Odesza’s audiovisuals are also mesmerizing, so that’s three things we love about the band’s live shows. 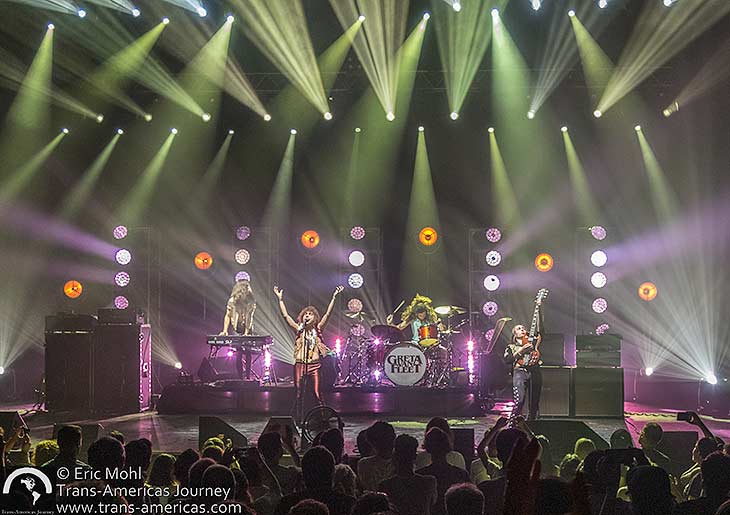 Greta Van Fleet played a Lollapalooza after-fest show at the Teatro Gran Rex in Buenos Aires and, of course, the 3,300 seat venue (which opened in 1937 as the largest cinema in South America) sold out really quickly. We managed to find two tickets online, but by the time we discussed it, the tickets were gone. Rookie mistake. Not a rookie mistake? Just going to the box office before the show starts. We scored two tickets there and we were in! 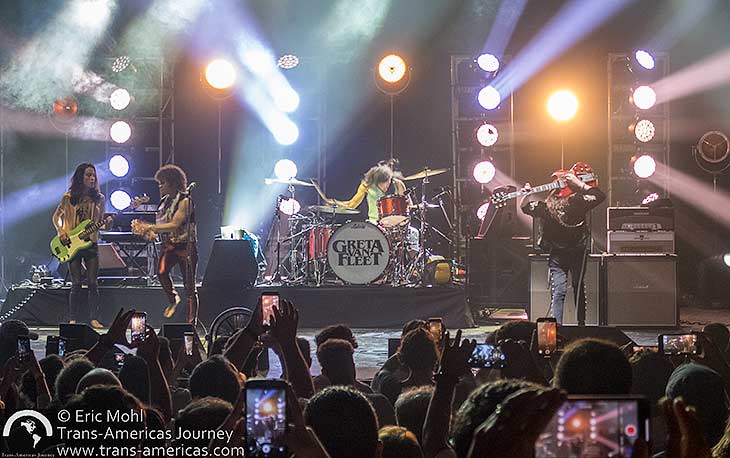 The Rex was packed as the band played the same songs they’d presented during their festival performance (so far, they’ve only released one album and one EP). However, the energy in the theater was even more unbridled than it was at the festival, especially for the guitarist who kicked out all the stops and, if you ask us, stole the show with non-stop shredding and even some skillful playing with the guitar behind his head.

And now, a rant. Why do Argentinean crowds at live music performances think it’s okay to break out the ‘”Ole Ole Ole Ole” soccer chant and clapping routine while the band is performing! It’s bad enough that they do it before the band takes the stage (as if their shenanigans are going to bring the band out any sooner), but it’s absolutely unacceptable to chant and clap while musicians are on the stage playing music for you. Stop it. Rant over.

Here’s a little Lollapalooza recap video full of performances from all three days of the music festival. 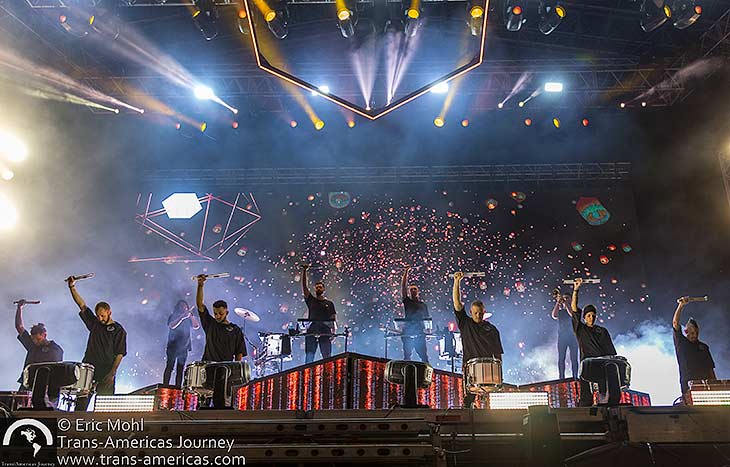 Thank you, and goodnight from Odesza as they closed out Lollapalooza Argentina 2019.