We were woken by a woodpecker vigorously investigating the log walls of the Homestead Cabin we’d rented at Minto View Cabins outside Atlin, Canada. During a break in the action, the bird grabbed the outside of the windowsill, hung down to the glass and peeked in at us. We were sad to be leaving the charms of our wonderful cabin (and our new friend), but excited to be getting back to Alaska. 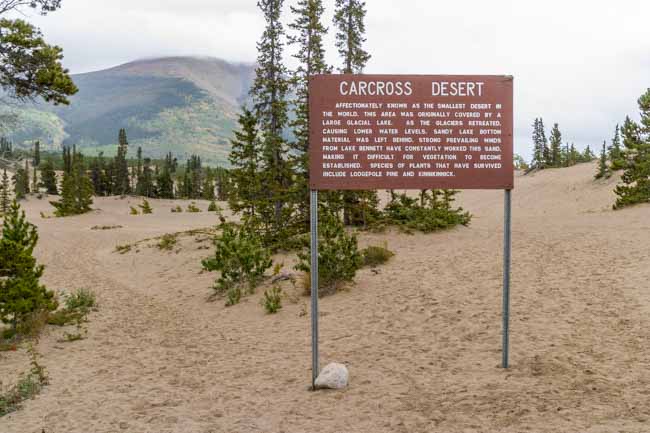 Halfway between Whitehorse, Canada and Skagway, Alaska is the smallest desert in the world.

We rejoined the Klondike Highway that runs from Whitehorse, Canada to Skagway, Alaska and soon reached the town of Carcross (short for caribou crossing), home to the smallest desert in the world. The Carcross Desert is a bizarre collection of dunes that rises up out of nowhere then disappears just as quickly. It really was tiny and before we knew it we’d seen it all. 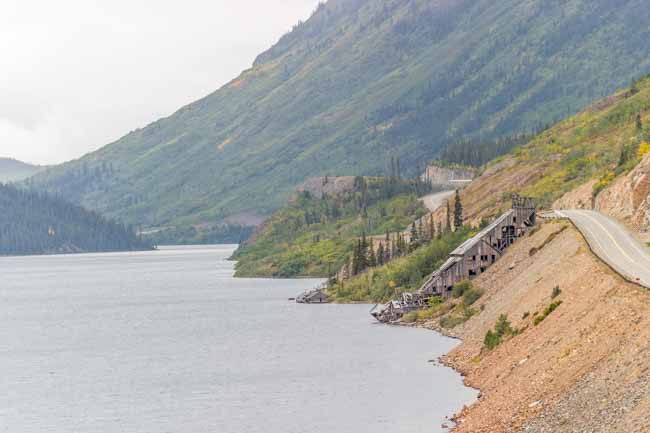 The defunct Venus silver mine.

In Carcross itself we pulled in for a quick peanut butter and jelly sandwich and a look around the town’s visitor center where Daphne proved to be a wealth of information not just about the Carcross area but all the way up into Alaska. If not for her, we never would have known about Wild Eagle and Daniel Johnson. 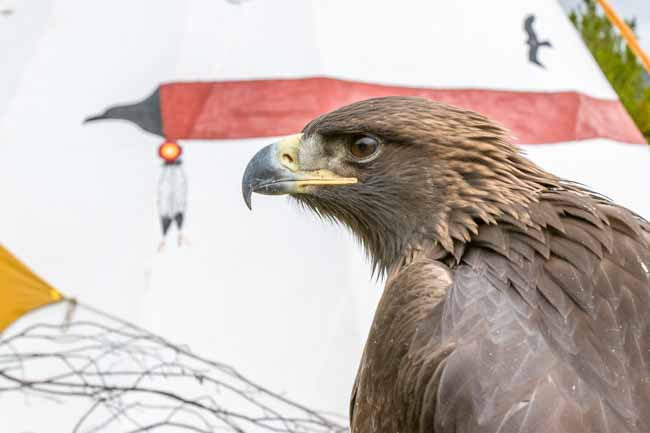 Dan, who had a pet owl at age 14 and got his first eagle by age 17, has a license to go into the Yukon wilderness to rescue injured or abandoned eagles which he then rehabilitates. When we were there, Dan had a bald eagle and golden eagle siblings in his care and it was as fascinating to hear Dan talk about the birds as it was to see the animals up close. Dan haf big plans to build a giant tee-pee in which he coulf give bird talks and presentations to visiting travelers and we wish him luck with that. 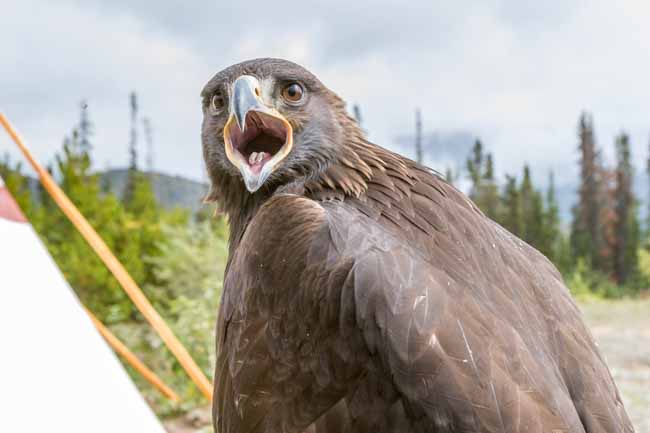 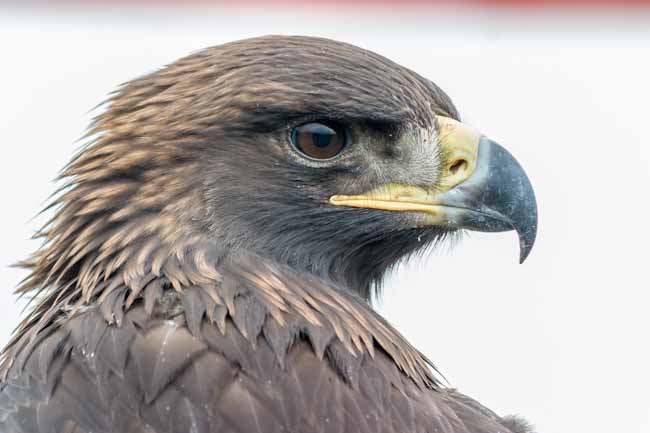 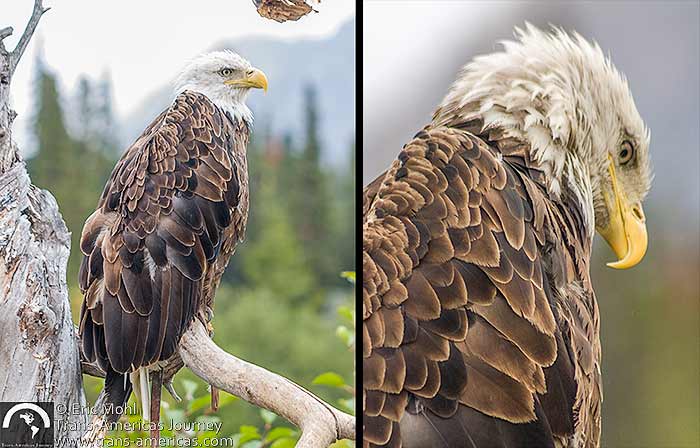 An injured bald eagle at Wild Eagle, an eagle rehabilitation center near Carcross

As we were hanging around with Dan the weather moved in and the rest of our drive into Alaska, over the White Pass and down into Skagway, was done mostly in clouds so thick we only got teasing glimpses of the gorgeous terrain. At one point visibility was so bad that we couldn’t see more than 30 feet in (10 meters) front of us and we were reduced to crawling up the road with our hazard lights blinking away. 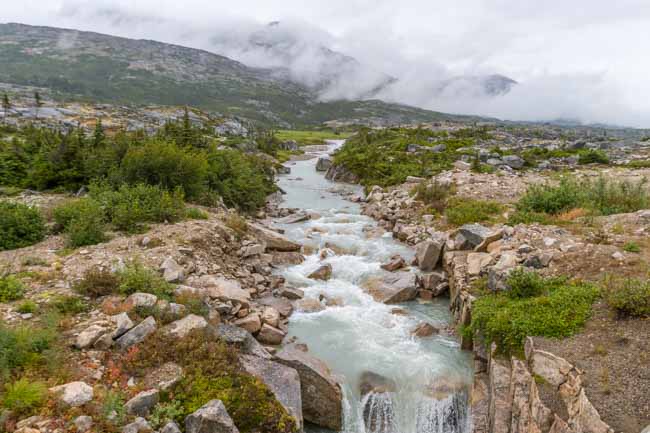 On our way up to the White Pass. 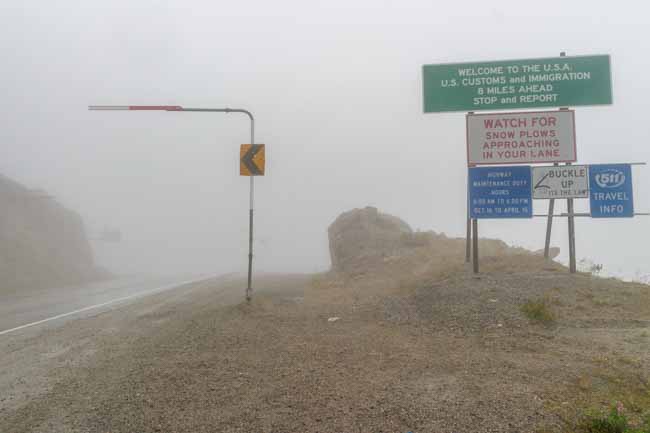 Visibility at the US-Canada border, just before the summit of White Pass at 3,300 feet (1,000 meters), was almost zero. The 16 foot (5 meter) high road markers give you a sense of how much snow these coastal mountains get. 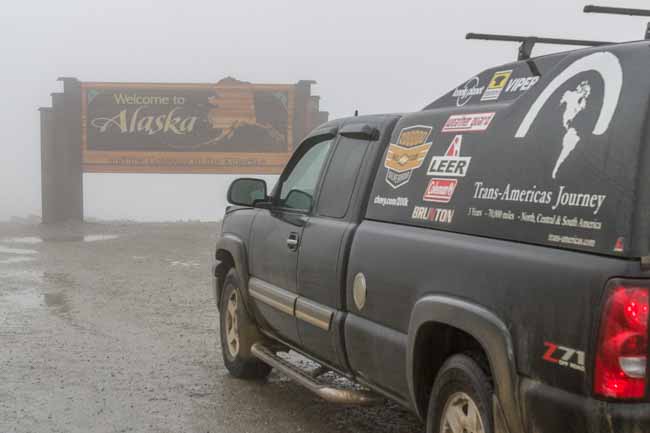 The first of many crossings into and out of Alaska. 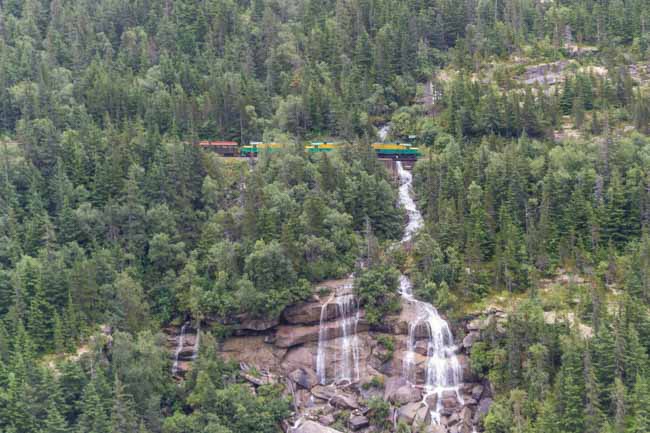 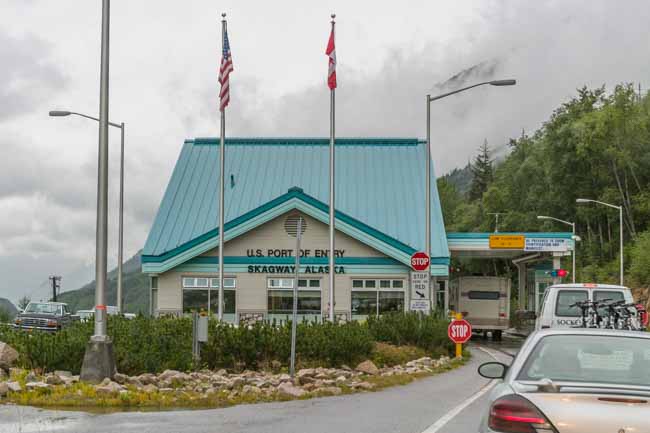