The weather does not improve as we crept our way down the White Pass and enter the town of Skagway, Alaska where the Klondike Gold Rush gained a stranglehold on this part of the world between 1897 and 1899. And boy, does the town make sure you never forget it. 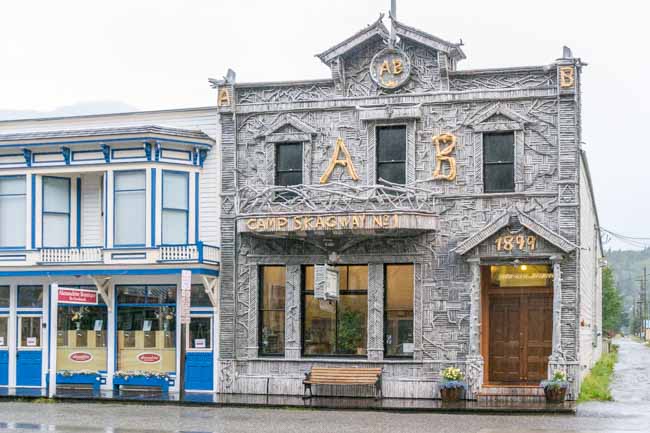 The Arctic Brotherhood Hall in Skagway, Alaska, originally built in 1899, is covered with more than 10,000 pieces of driftwood.

The main downtown street through Skagway is lined with restored Gold Rush period facades including the Arctic Brotherhood Hall which dates back to 1899 and is covered with 10,000 pieces of driftwood. Everywhere you look there’s a saloon, some staffed with waitresses dressed up like the call girls who would have worked there 130 years ago. It all ends up feeling like Gold Rushville or maybe Klondikeland. 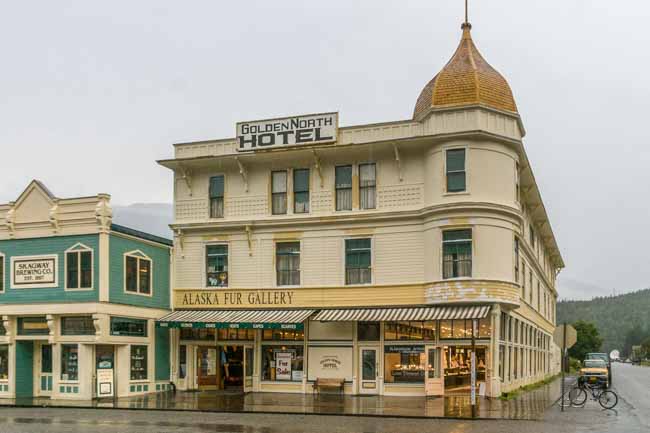 Many of the buildings in Skagway are restored turn of the century structures from the town’s heyday.

Skagway, Alaska was one of the main starting points of the Klondike gold rush which began in 1897. Now that the gold is gone, Skagway is busy mining for new riches, mainly from the pockets of the tens of thousands of cruise ship passengers who pass through here each day in the  summer season, to eat, drink, and shop their way through town. 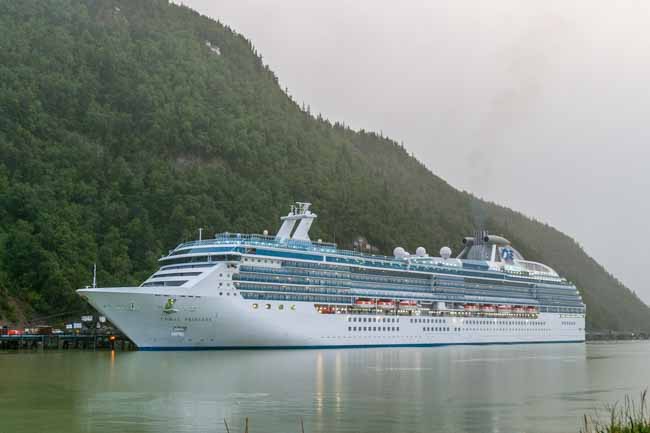 The lone cruise ship that was in Skagway port when we were there.

This means that any real estate not already occupied by a saloon or other holdover from 1899 is now home to a jewelry shop, or craft market, art and antiques vendor, or t-shirt emporium. You can even buy a nail file with Skagway printed on it, though why you’d want to is beyond us. Luckily, we arrived on September 1 near the tail end of the season and we just encountered one lone cruise ship. 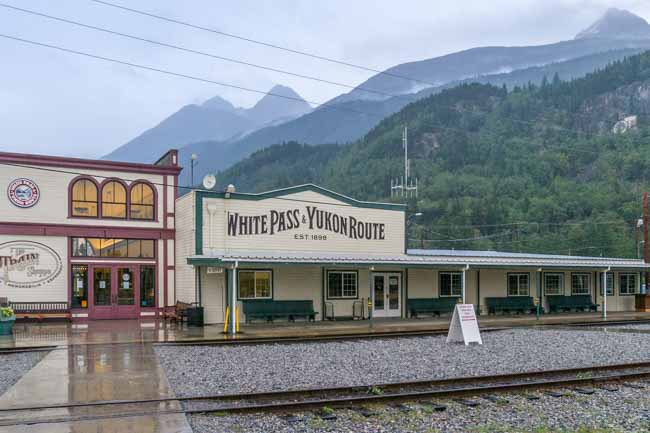 The train station for the White Pass & Yukon Railway.

We’ve got nothing against honest commerce, but many of those making the most of this new gold rush aren’t even from Skagway (less than 1,000 people are actually residents). Many vendors simply descend on the town at the beginning of summer then pack up shop after the last cruise ship of the season has left in early fall and move their whole operation to a port in the Bahamas for the winter where they peddle the same wares to different cruise ship passengers. 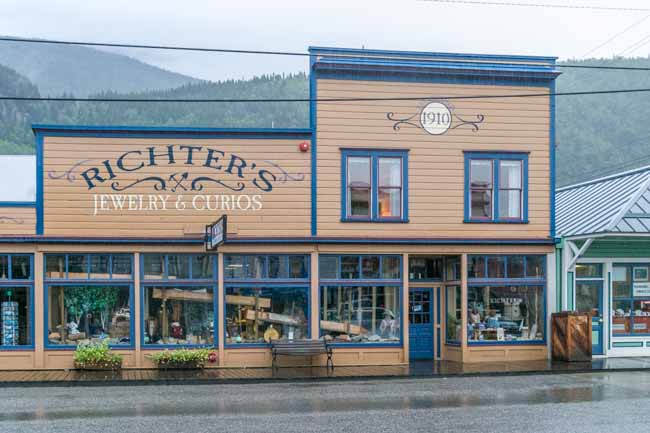 Skagway, Alaska was one of the main starting points of the Klondike gold rush which began in 1897. Many of the buildings are restored turn of the century structures from the town’s heyday.

If you arrive in Skagway near the end of cruise ship season, like we did, be warned that most of the people in town—locals and transplants alike—have had it up to HERE with tourists by then so don’t expect service with a smile. We stayed in a B&B run by one of the surliest women we’ve ever met. We’re not sure if she’s any sweater in June, but it’s a fair bet.

Luckily, you can escape since the area around Skagway offers miles and miles of trails and at least one remarkably accessible backcountry cabin. To get to the Laughton Glacier Cabin in the Tongass National Forest, simply board the White Pass & Yukon single-gauge train in  Skagway and get off at the Glacier Station stop. This is the trailhead for an easy 1.5 mile (2.4 km) walk to the lone, very basic US Forest Service (USFS) cabin). From the cabin, it’s a 2 mile (3.2 km), non-technical walk right to the Laughton Glacier which hangs among the 3,000 foot (1,000 meter) high walls of the Sawtooth Range. The Skagway River is within walking distance of the cabin as well and the area attracts mountain goats and bears (in summer).

That’s what they tell us anyway. Sadly, when we began planning an excursion to the cabin we quickly found out that it was closed for the season so the USFS can repair and improve it. Looking for something to do other than window shop in Skagway, we took a drive out to Dyea, a ghost town from the, you guessed it, Klondike Gold Rush era. In the summer the National Park Service runs walking tours of the Dyea Town Site which is at mile 0 of the 33 mile (53 km) Chilkoot Trail. 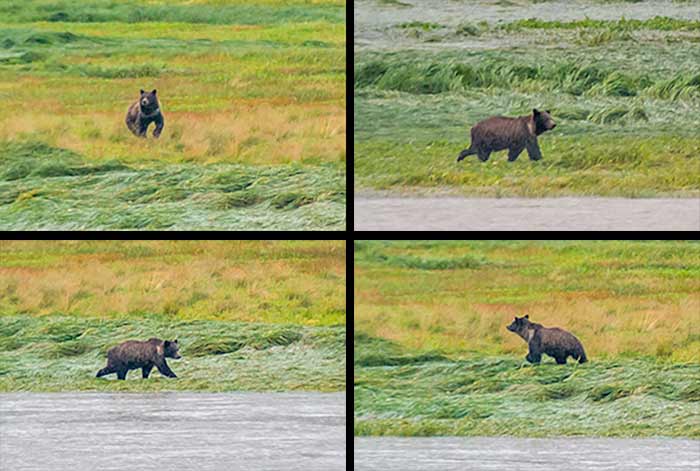 We saw this grizzly hunting for fish in some flooded grass in the middle of a river near Dyea, a ghost town at the beginning of the Chilkoot gold rush trail near Skagway, Alaska.

On our way back to Skagway we noticed movement on a sandbar in the middle of the Taiya River. To our amazement, it was a grizzly bear playfully pouncing on what we assume were fish that had become trapped in the reeds around the bank or stranded on the bank itself as the heavy rain we’d been drenched with raised the water level in the river. We pulled over and watched the bear run, stalk, waddle, and generally cause chaos until it got too dark to take any more photos. 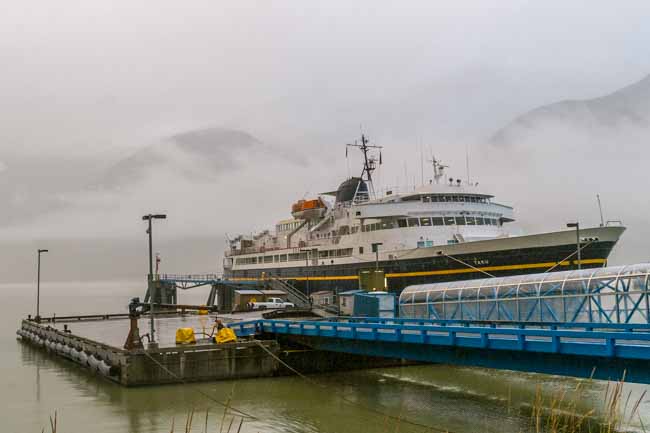 The Taku, an Alaska Marine Highway ferry, took us and our truck the 15 miles (24 km) between Skagway and Haines since those two Alaskan towns are not easily connected by road.

Besides, we’ve got a ship to catch. No, no not a cruise. We’ve got to board the Alaska Marine Highway ferry MV Taku for the 15 mile (24 km), one hour run between Skagway and Haines, which beats the land-based option, a 352 mile (566 km) drive that includes two international border crossings. Our ship sailed at night and in the dark we took an eerie leap of faith as the captain navigated through narrow rocky passages, sometimes with the help of a spotlight or two. It was probably even more nerve-wracking in the daylight when you could see just how close you were to the rocky outcroppings. 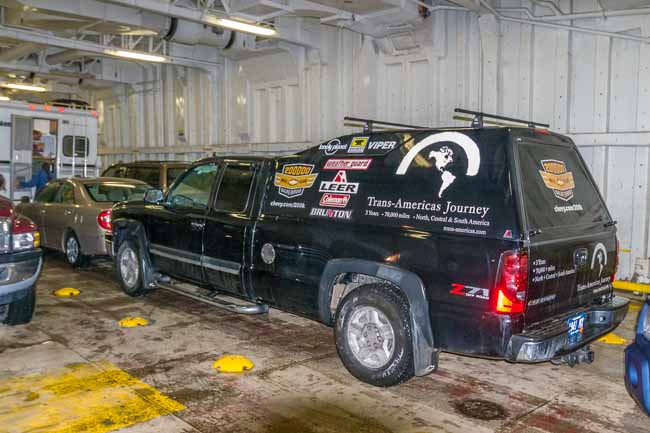 Safely inside the The Taku, the Alaska Marine Highway ferry that took us and our truck the 15 miles (24 km) between Skagway and Haines