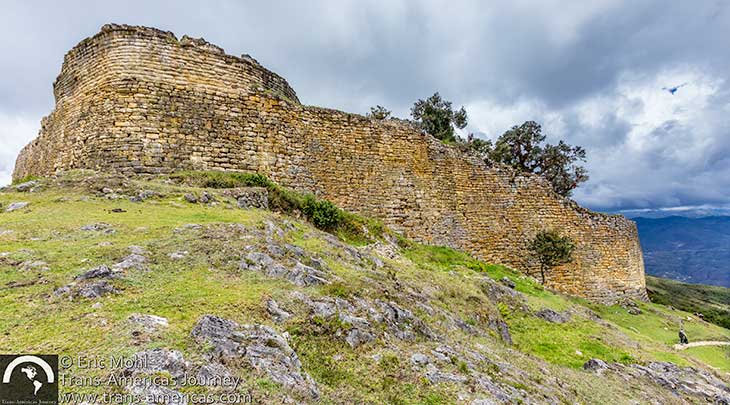 Our first view of the imposing wall that surrounds the Kuélap archaeological site in northern Peru.

The Kuélap archaeological site (15 soles or about US$4.25 per person) includes more than 550 known structures on a 17 acre (7 hectare) manually-flattened mesa at 9,642 feet (2,939 meters). It is a dramatic setting for a dramatic pre-Incan site. 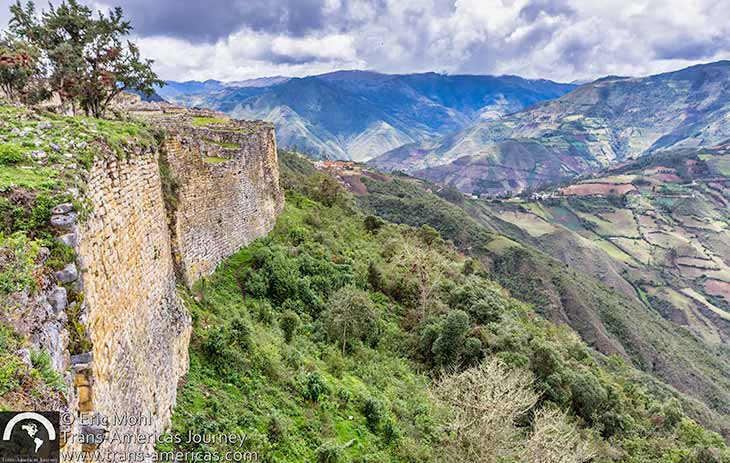 The Kuélap archaeologicals site was built on a hilltop that was flattened by hand. 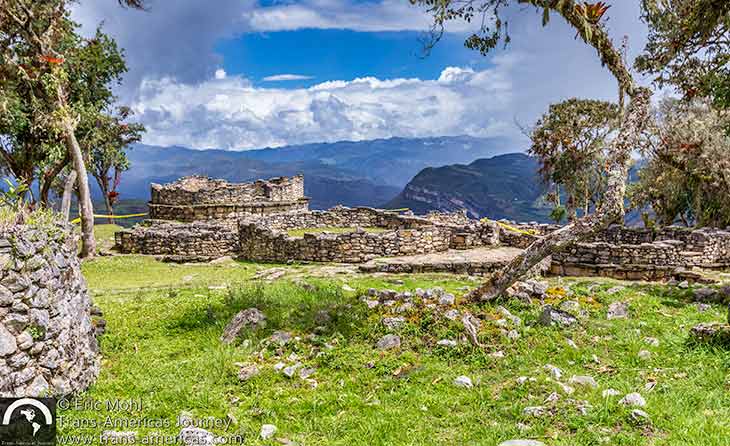 One area of the large Kuélap archaeological site.

In the late 1400s, the Incas took the settlement. The Incas were then routed by Spanish conquistadors in the 1500s and, by the late 1500s, Kuélap was abandoned. 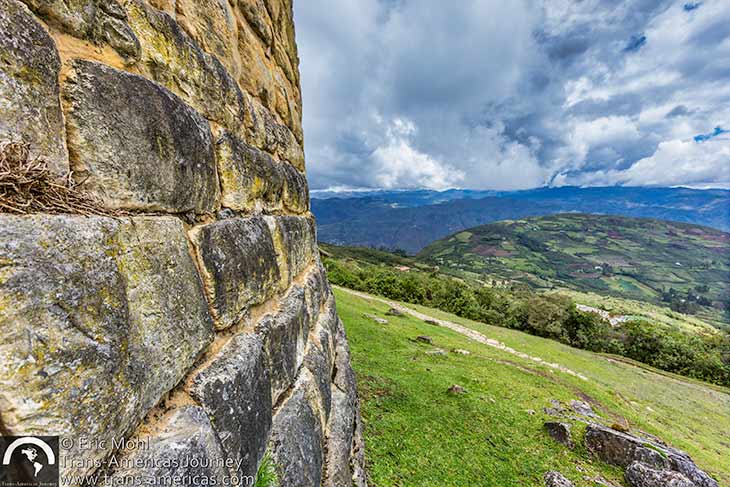 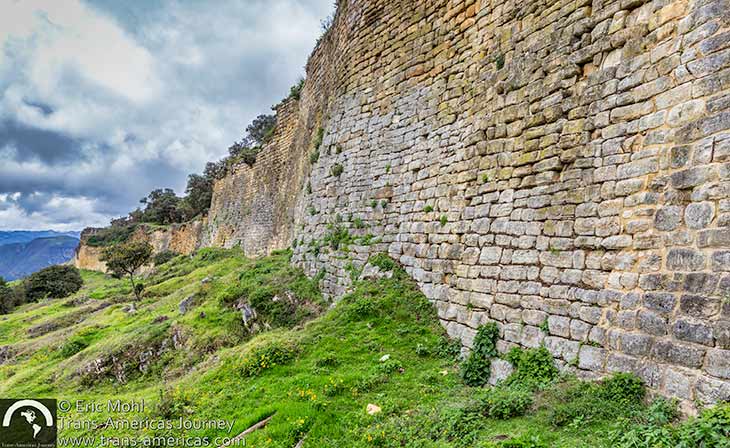 The wall around the Kuélap site is up to 65 feet (20 meters) high in places.

Our first look at Kuélap, as we approached on the 1.5 mile (2.5 km) trail from the parking lot to the site, was of the southern section of the massive wall that surrounds the site. The stone and mortar wall is nearly 2,000 feet (600 meters) long and up to 65 feet (20 meters) high. 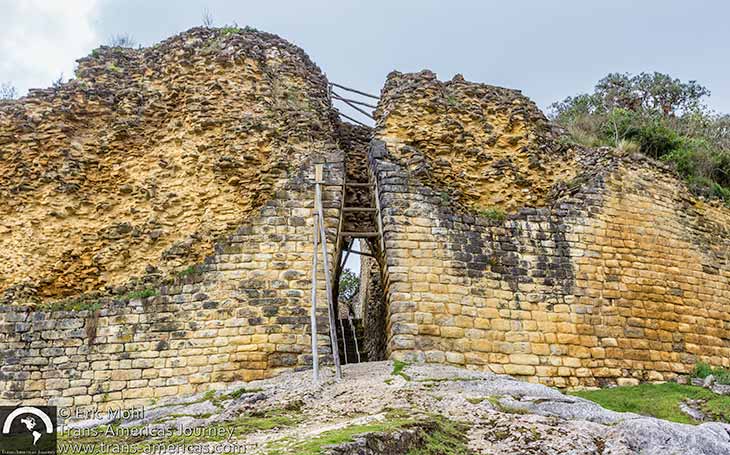 This entrance through the imposing wall and into the site itself was only for royals.

There are three entrances built into the wall including one for royals only (which was collapsing and closed when we were there) and one for commoners. 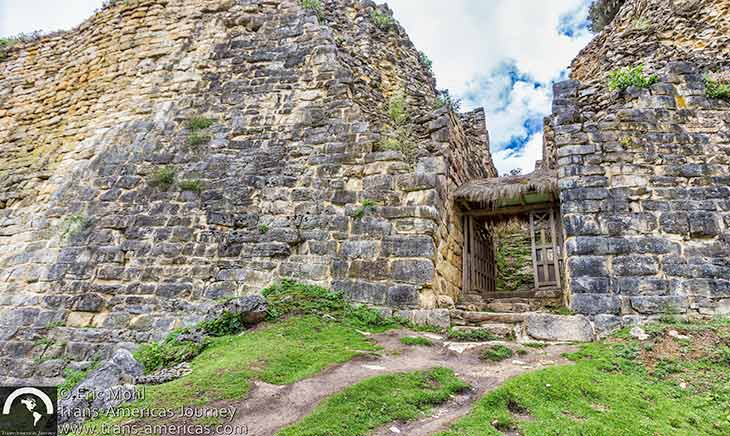 We used the commoner entrance to get into the Kuélap site.

All entrances were built in the form of a long, narrow stone staircase through a deep ravine which narrows significantly at the entrance to the settlement in a way that would effectively restrict and slow the passage of enemies. 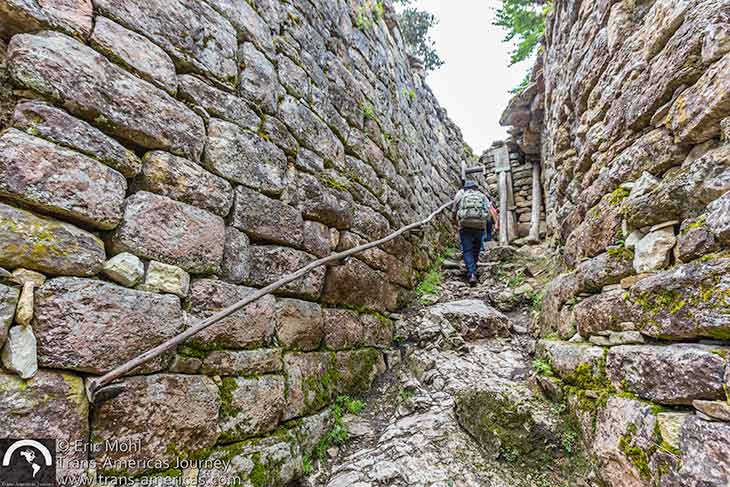 There were only three ways into the Kuélap site through the walls and each entry was steep and narrow, probably as a defensive measure.

Our tour started in the northern part of the site where our guide explained that a tower-like construction may have been used defensively and offensively (the Chachapoyas people weren’t called the “Warriors of the Clouds” for nothing). 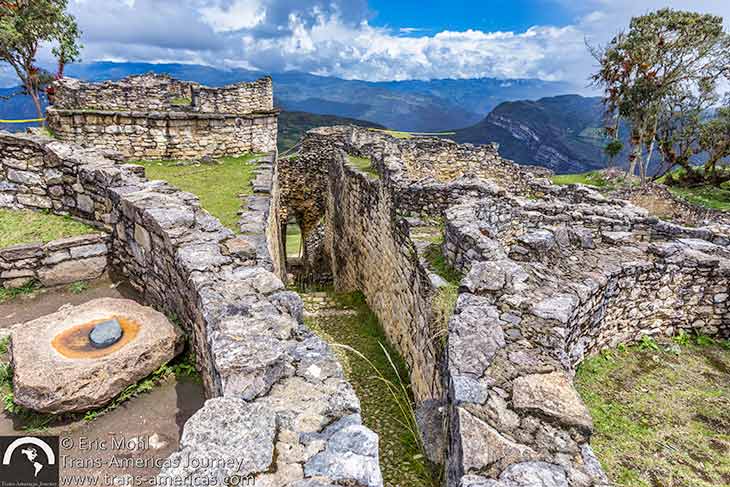 Other experts have suggested that the structure may have also been used in a ritual for rain. Part of the fun of visiting archaeological sites is the mystery of it all and Kuélap has more than its share of unknowns. 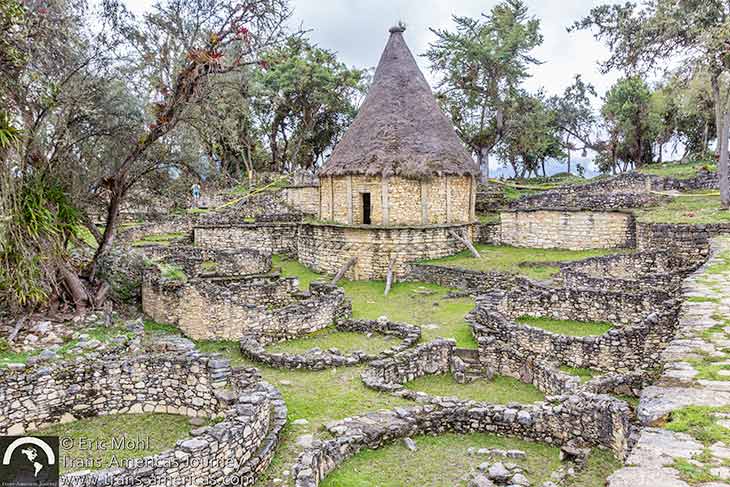 More than 3,000 people may have lived at Kuélap during its peak and most of the hundreds of buildings here were small round homes.

At its height, Kuélap may have been home to more than 3,000 people so the residential areas of the site are extensive with hundreds of known structures. These are mostly small round buildings made of stone and topped with a thatch roof. The buildings were built quite close together in what really seemed like a neighborhood layout. 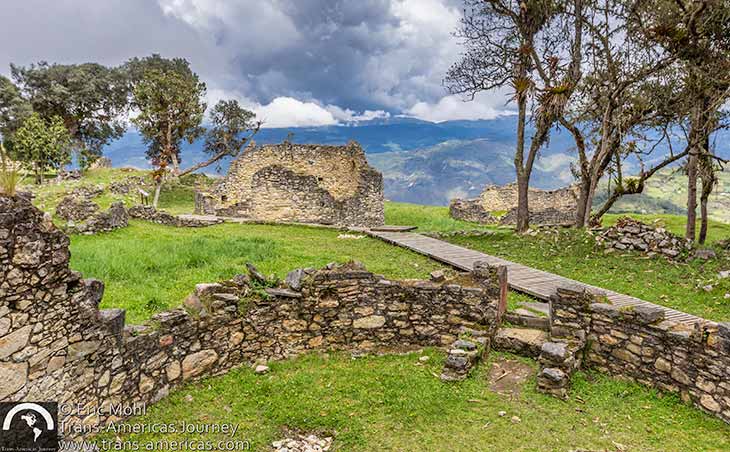 The remains of a round foundation. 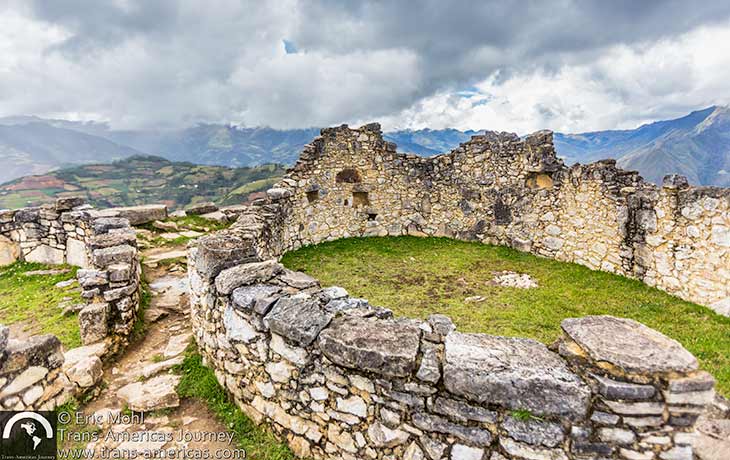 What you can see now are just the remains of the round foundations and few short portions of walls, but one structure has been rebuilt to depict what experts believe the buildings would have looked like when they were inhabited. 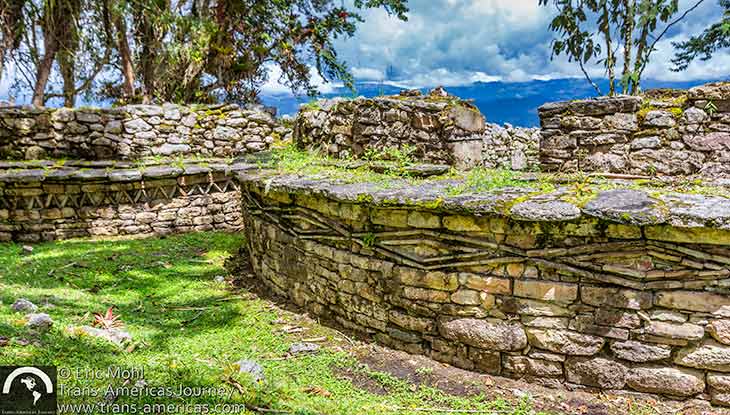 The decorative details at the Kuélap site include inlaid stones in a rhombus pattern. 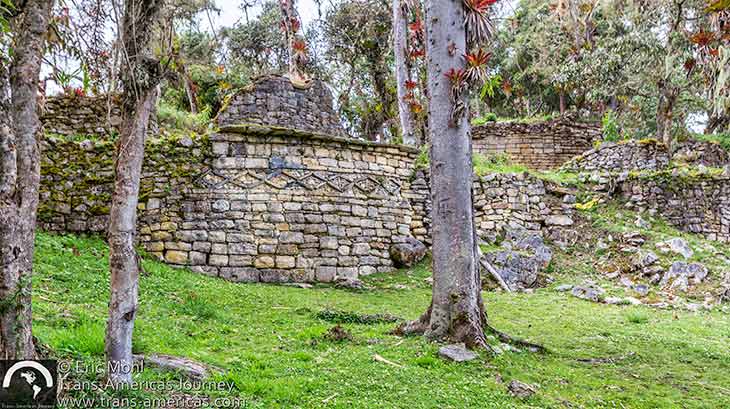 As you’re touring Kuélap, be on the lookout for the site’s notable decorative elements as well. You will see rhombus and zig-zag designs inlaid in stone and there are also some stones that have been hand-worked to depict animals and faces. 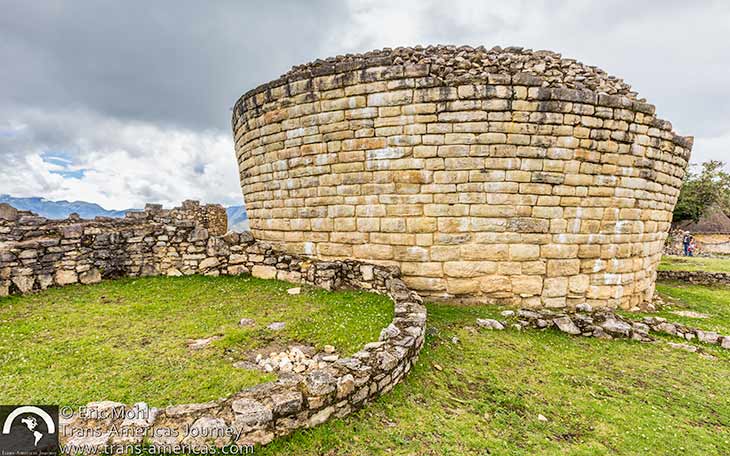 The Templo Mayor (also called El Tintero) structure is the most fascinating (and unlikely) one at the site.

One of the most extraordinary buildings at Kuélap is the Templo Mayor which is also called El Tintero. This structure was built in an inverted cone shape with walls that angle out at the roofline. This is a tricky engineering problem even today and the fact that the Chachapoyas made such a building and it’s still standing is impressive. Some experts believe this building may have been used as an observatory and human bones have been found inside as well. 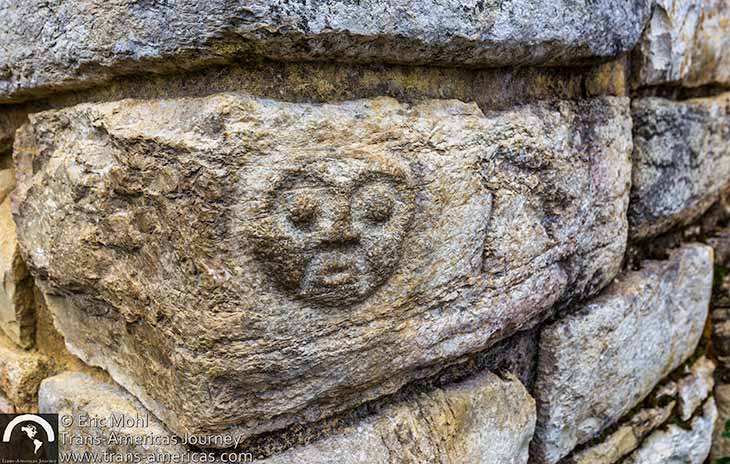 Be on the lookout for this carved face in the Templo Mayor/El Tintero structure.

And there’s beauty in the building too. The massive stones used to build the Templo Mayor/El Tintero  were so smooth they seemed fake. And don’t miss the small carved face on this building.

Get an overview of the Kuélap archaeological site in our drone travel video, below.

Getting to the Kuélap archaeological site

If you have your vehicle, as we do, you can drive to the site on your own along a steep and rough dirt road. However, we decided to visit Kuélap on a group tour with a company called Turismo Explorer from the city of Chachapoyas about 45 miles (70 km) from the site (65 soles, or about US$19, per person including van transport, English-speaking guide, and site entry). Though not long, the drive from Chachapoyas to the site took a few hours because the road is rough and winding. But there’s now a much faster, easier, and even more scenic way to get to the Kuélap archaeological site. 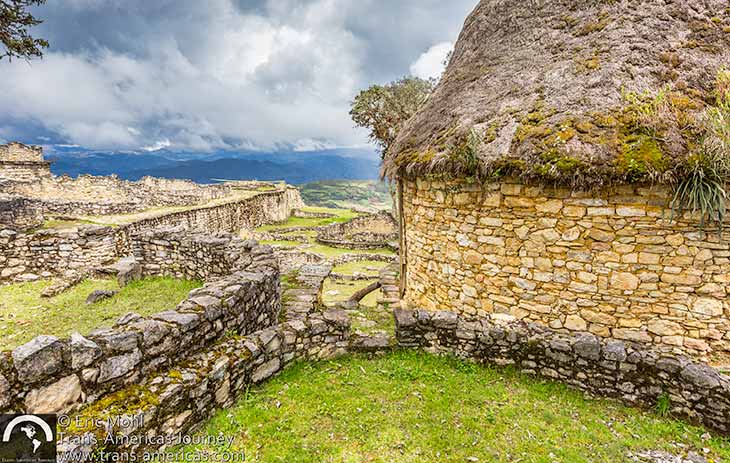 Thanks to a new cable car system, you can get to the Kuélap archaeological site much more easily than we did.

When we were there, work had just begun on a cable car system to bring visitors to the site. That multi-million dollar cable car system is now complete and it travels along a 2.5 mile (4 km) route up nearly 3,000 feet (915 meters) to the mountaintop site in about 20 minutes. The cable car system now transports more than 75,000 visitors from the valley town of Nuevo Tingo every year. That’s a big jump in visitation from the 40,000 people that visited Kuélap annually before the Telecabinas Kuélap cable car was built. 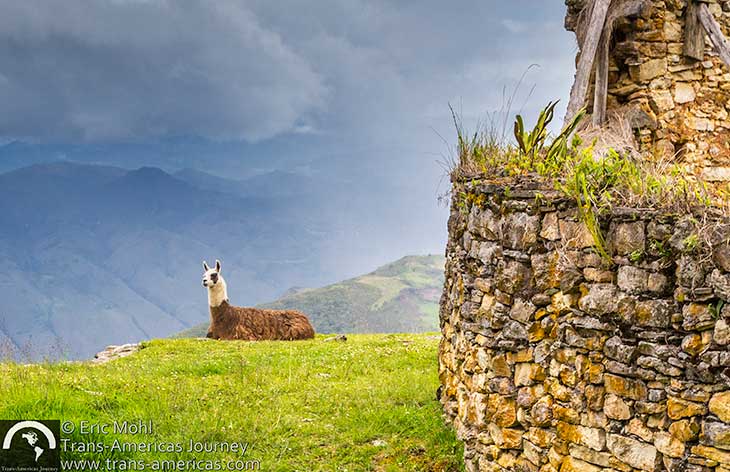 Just one of the many llamas that graze and wander in the remains of this impressive site.

In 2019, the Kuélap archaeological site was submitted for UNESCO World Heritage Site status and is currently on the list of tentative sites as part of a grouping of archaeological sites in the region including Yalape, Macro, Revash, and Karajía.