Best Campsite Ever (but the neighbors are kinda noisy) – Chiapas, Mexico

One of the great things about traveling in Chiapas, Mexico is the chance to experience living Mayan culture, but the region is also home to stunning natural beauty, great campsites, and a flourishing population of endangered scarlet macaws. 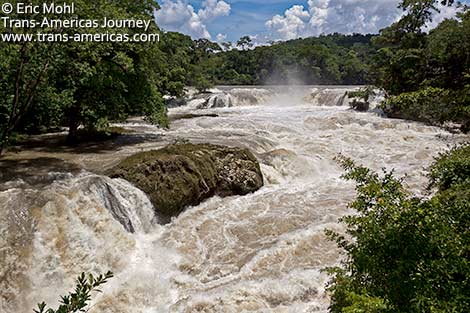 The Santo Domingo River as it rages through Centro Turistico Las Nubes in Chiapas, Mexico.

A rough road to a raging river

The rough road that leads to the Centro Turistico Las Nubes almost got the better of us, but we finally reached this collection of wooden cabins and a nice camping area on the banks of the Santo Domingo River. The river drops here creating a series of rapids and swimming holes which are the main attraction.

When water levels are normal, the water is clear and blue and you can swim in the refreshing pools. During our visit, however, we were afraid to even approach the bank and walking across a footbridge over the churning whitewater and tumbling rapids was heart-pounding.

The Santo Domingo River as it rages through Las Nubes in Chiapas, Mexico.

We walked past a few more seemingly-abandoned very large cabins in the jungle on our way up a trail to a dramatic overlook about 300 feet (100 meters) above the river, which felt like a relatively safe distance, at last.

Check out our heart pounding video of the raging Santo Domingo River, below.

Welcome to the best campsite ever

We didn’t stay at Las Nubes long. We were anxious to get to Centro Ecoturistico Ara Macoa Las Guacamayas and check out their namesake scarlet macaws (called guacamayas in Spanish). NOTE: the road to Las Guacamayas was mostly paved and all of it was in good shape (a relief after the bone crusher out to Las Nubes), so don’t be scared off if your guide book talks about a bad dirt road.

Las Guacamayas was started by locals in the Reforma Agraria village–mostly aging original settlers and descendants of the folks from Oaxaca who were encouraged to move here by the Mexican government in 1976 as a way to populate this border area and work the land. 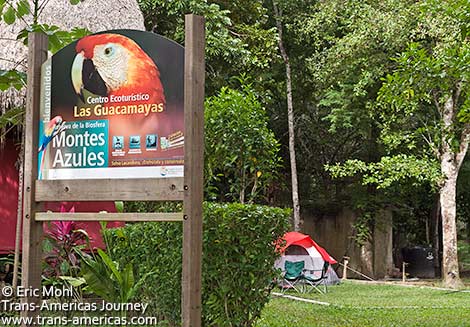 In 1991, the locals organized themselves and set up a 5.5 square mile (14.5 square km) preserve where they placed 30 scarlet macaw nests. This flamboyant relative of the parrot used to have a large range in Mexico but is currently found primarily in the southwestern region.

This preserve, on the banks of the Lacantún River abutting the vast Monte Azul Biosphere Reserve (one of the most bio-diverse areas in all of North America), has been very successful at increasing the scarlet macaw population and attracting tourists. 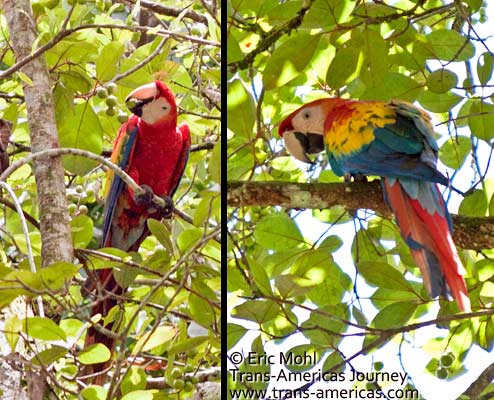 Our scarlet macaw neighbors check us out.

With the help of a group called Sendasur, a community-based organization devoted to preserving the flora and fauna in Southern Mexico and promoting sustainable tourism in the region, Las Guacamayas has expanded to include tour guides and a host of tours in the jungle and on the river,  thatch roof cabins with private hot water bathrooms and a lovely open-air riverfront restaurant (the Sunday brunch buffet looked particularly good).

There’s also a wonderful grassy area very near the river that’s been set aside for camping, complete with running water, flush toilets, and cold-water showers which are cleaned daily all for 30 pesos (about US$2.50) per person per night. 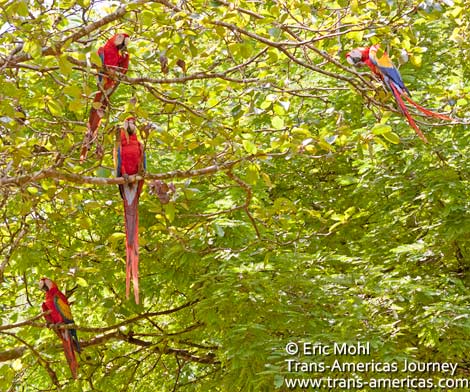 Just part of the flock of scarlet macaws which took over a tree next to our tent.

That would have been perfect enough. Then we woke up after our first night to discover that the tree next to our tent had been taken over by scarlet macaws. They’d flown in for breakfast and up to 10 at a time were feasting in a tree literally right next to our tent. While other visitors to the reserve were out tramping through the sticky jungle trying to spot macaws we spent the entire day in our comfy camp chairs sipping coffee (and, later, cold beers) and watching the vibrant birds stuff themselves silly. 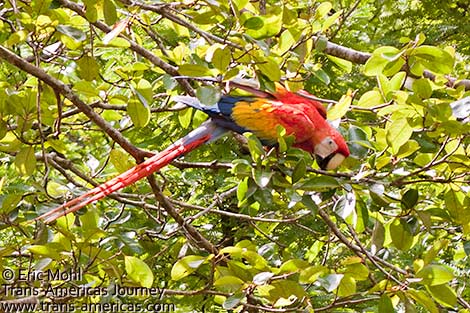 In the late afternoon a small family of howler monkeys showed up as well and decided to spend the night in another nearby tree. The following morning their dinosaur-like roars (they really should be called roaring monkeys) served as our (very early) wake up call.

Don’t miss our video, below, which gives you an up close look at the macaws and the chance to hear howlers monkeys at close range. 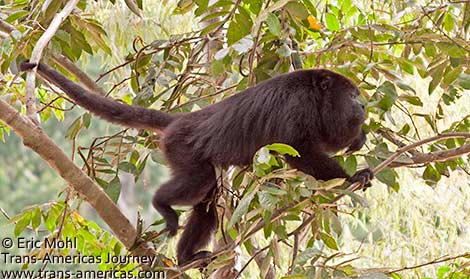 A male howler monkey marking his territory by howling like mad using a pouch under this chin to amplify the sound to truly creepy levels. 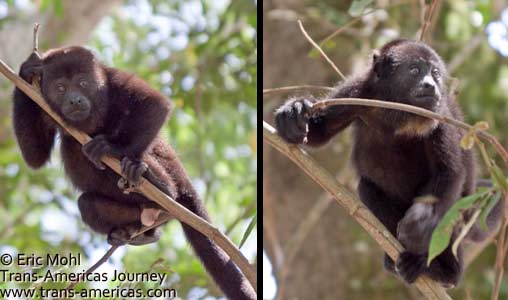 Young howler monkeys check us out. 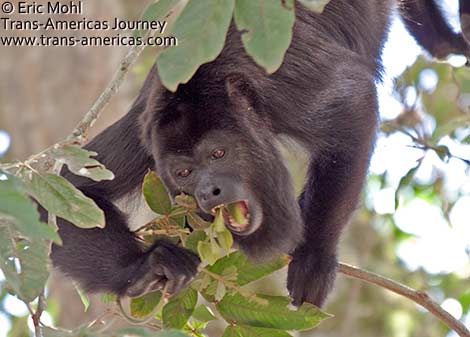 This is what howler monkeys spend most of the day doing. 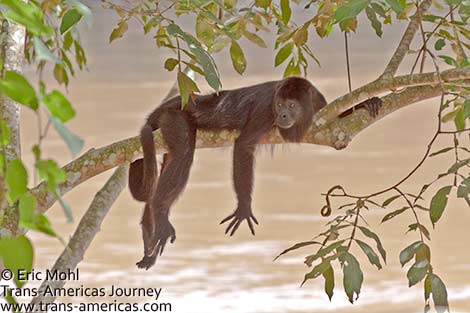 Catching a breeze over the river.

One creature really took us by surprise (see below). Meet megalopyge opercularis, otherwise known as a Southern flannel moth, a pussy moth, or a puss moth. 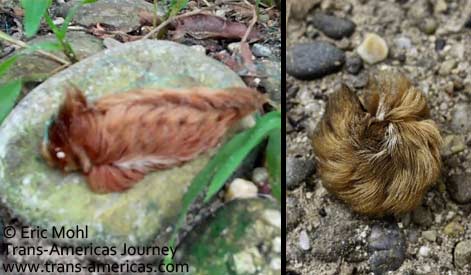 This strange creature is known as the Southern flannel moth, a pussy moth, or a puss moth.

This 3 inch (7 cm) long dude was creeping along the riverbank and when we spotted him he quickly rolled up in a defensive ball. We know enough to never touch caterpillars or centipedes–they’re often poisonous. Little did we know that this fluffy guy is extremely poisonous, hence one of its other names: the asp caterpillar. This crazy thing eventually turns into a really glorious moth (and loses its poison).