By pure luck, we found ourselves in Puebla, Mexico during the brief but tasty time of year when a regional dish called chiles en nogada is on offer. In another stroke of luck, we got to taste our first bites of this specialty–and other Pueblan specialties, including mole–at one of the city’s most celebrated restaurants. We also took a cooking class and did some wine tasting. Our city travel guide covers the food in Puebla. 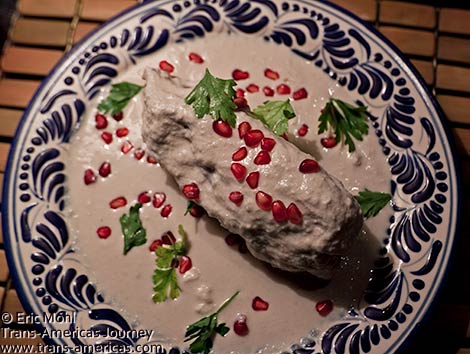 Chiles en nogada is a dish that’s only available during certain months of the year in Puebla, Mexico.

We were even joined by Leobardo Espinosa, the owner of Mesones Sacristia, which is a boutique hotel and a gourmet restaurant located in his family’s 250-year-old house. Leobardo kindly hosted us for this Pueblan culinary rite of passage

Chiles en nogaga consists of a peeled and cooked (and sometimes breaded) mild poblano chile stuffed with ground meat, diced fruit, and spices then drenched in a walnut sauce and garnished with pomegranate seeds. The dish is not as sweet or as creamy as you might think from reading the list of ingredients.

The complex textures (soft, firm, crunchy), flavors (sweet, spicy, salty), and colors (which mimic the colors of the Mexican flag) really cooperate to create a simply delicious dish which feels extra special because you can only get it in late summer and early fall when pomegranates ripen.

Folks love their chile en nogada but no dish gets a Poblano (someone from Puebla) going like mole. The first mole sauce is said to have been invented in Puebla by a bunch of nuns who were desperate to come up with something that would please their picky bishop. Another legend tweaks this one a bit and has the nuns creating mole for General Iturbe after the Mexican Revolution. NOTE: when we were in Puebla the Cocina y Ex Convento de Santa Rosa, where the region’s famed mole is said to have been invented, was closed for renovation. 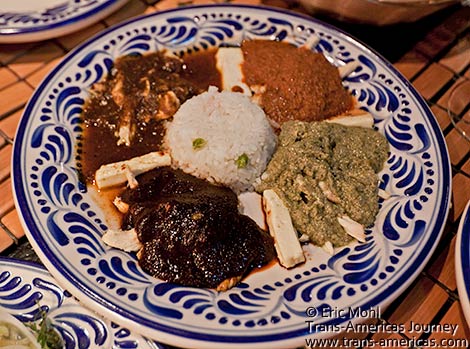 Today there are dozens of moles and any self-respecting home cook in Puebla has her own version of the stuff—some involving dozens of ingredients. At Mesones Sacristia we tried a mole sampler plate which included four different varieties: a red pumpkin seed variation, a green pumpkin seed variation, a classic mole poblano, and the house mole which is made with chipoltle peppers and a bunch of secret ingredients. Each was remarkably different in color and flavor.

Leobardo suggested that we should come back in the morning and take a brief cooking class with his executive chef, Alonso Hernandez, who would teach us how to make what we like to call Mole for Morons. 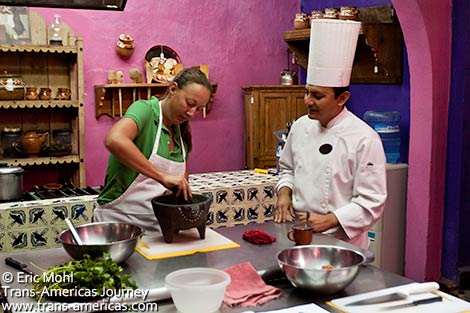 Karen trying to get the hang of grinding ingredients in a stone molcajete under the watchful eye of Chef Alonso Hernandez. It’s harder than it looks…

Leobardo started offering cooking classes about eight years ago in a no-frills kitchen that looks a lot like a typical Mexican kitchen. No Viking range, no copper-bottom pots and pans, no hand-hammered knives that cost more than a college degree. Just a good hot flame, a blender (essential in almost all Mexican cooking), a couple of big pots, a stone molcajete, and a well-worn comal to sear ingredients and heat tortillas. 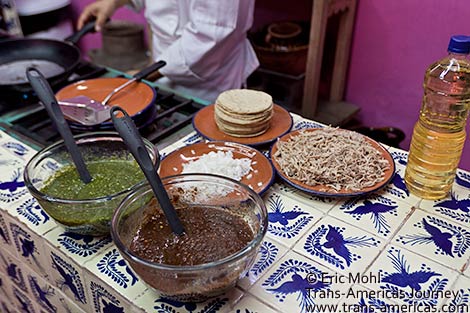 We made this! All the fixings for chalupas: red and green salsas, shredded chicken, and chopped white onion. Take that Taco Hell!

From 10 am to 1 pm, chef Hernandez kept us busy making fresh red and green salsa for chalupas which, topped with shredded chicken, were light and fresh and nothing at all like what Taco Hell is selling. 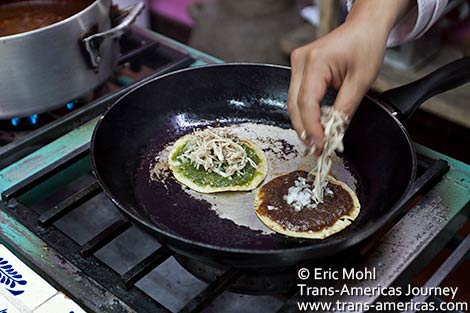 Karen putting a chalupa together.

The appetizer out of the way, we got down to business with a mole recipe that called for 11 ingredients (try it yourself, below). All were pretty straightforward except one: an incinerated corn tortilla. We literally held a corn tortilla over an open flame until it caught fire and became totally blackened, then we tossed the whole mess right into the mole. Chef Hernandez said the blackening adds flavor, color, and texture. 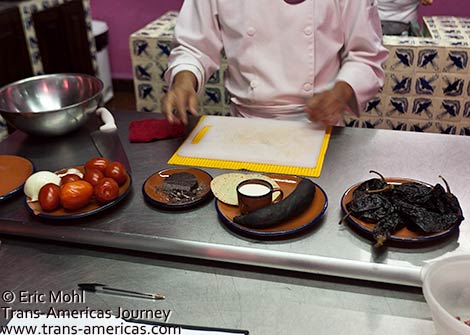 The 11 ingredients we used to make our mole sauce. 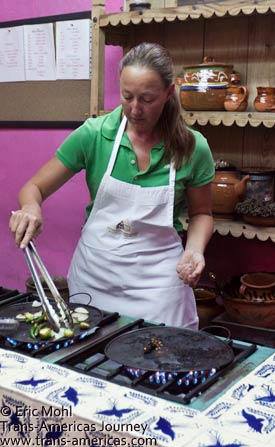 1. Remove the stems and seeds from the chilies
2. Roast the tomatoes, onion, and garlic
3. Fry chilies just to get a crispy texture
4. Boil vegetables and chilies in 4 cups of water until soft
5. Grind all the ingredients and strain
6. Fry the plantain until golden brown
7. Put tortilla directly over the flame and burn it until it’s black all over
8. Grind the plantain and the tortilla with one cup of water
9. Boil the sauce for a few minutes to cook it and add color
10. Stir in the tortilla and plantain sauce
11. Stir in the chocolate and sugar
12. Add salt and cook for 25 minutes before pouring over chicken, turkey, or pork 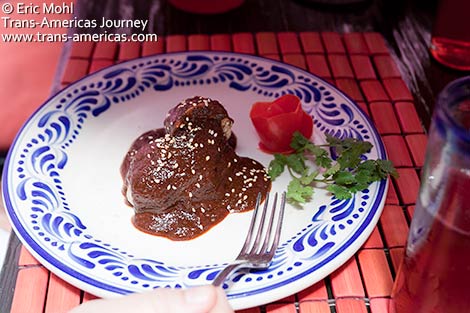 We can’t tell you whether it was the incinerated tortilla or not, but our mole was pretty tasty if we do say so ourselves.

By the way, Leobardo is also the man who invited us to a tasting and unveiling of special Bicentennial wines which Mexican President Felipe Calderón commissioned to mark Mexico’s 200th anniversary of independence from Spain.

Get more about travel to Puebla, Mexico in our post about culture in Puebla.