Exploring the Nazca Lines on the Ground – Nazca, Peru

The Nazca Lines, which were made a UNESCO World Heritage site in 1994, are best seen on a Nazca Lines flightseeing tour because the mysterious man-made figures and designs are so big that you need get high above them to see the whole picture. However, there are a bunch of ways to explore the Nazca Lines (spelled Nasca in Peru) on the ground too. 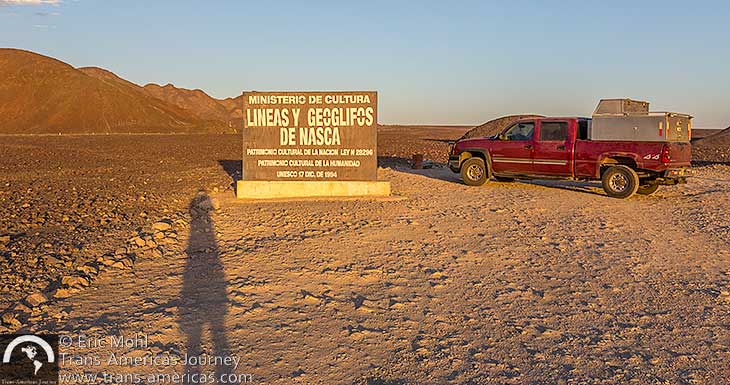 Welcome to our ground tour of the Nazca Lines.

Exploring the Nazca Lines on the ground

Heading out of Nazca on the Pan-American Highway you will pass through a toll booth. About 10 miles (16 km) past the toll booth you’ll see a dirt road to the left. Take it, then walk up a low hill from which you can look down on a massive plain full of straight lines and geometric shapes. The spot is spectacular at sunset. 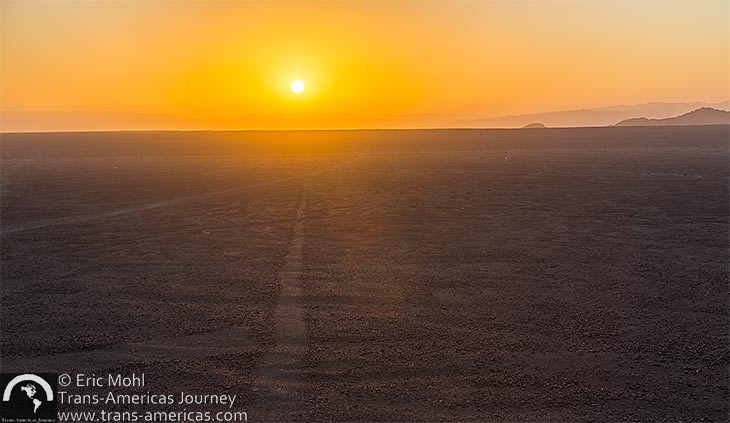 Try to be at this hill, with views over geometric Nazca Lines, around sunset.

Get back on the PanAm and continue about one more mile away from town and you’ll reach a viewing platform on the side of the PanAm (3 PEN or about US$0.90). A steep flight of stairs leads up to a top deck where you can look down on The Hands and The Tree. The view of these glyphs from the platform is not as spectacular as it is from a flightseeing tour, but it does give you a different perspective. 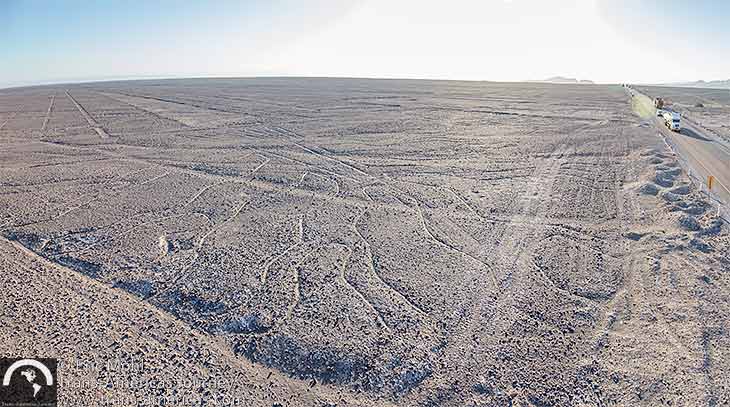 The Tree seen from the observation tower on the side of the PanAm Highway just outside of Nazca. 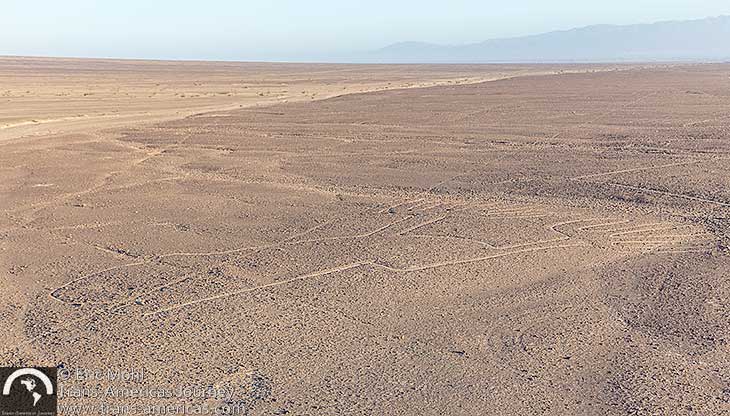 The Hands seen from the observation tower on the PanAm Highway just outside of Nazca.

Continue 2 miles (3 km) further down the PanAm to reach the small Maria Reiche Museum (10 PEN or about US$3) which tells the story of the German mathematician who studied and protected the Nazca Lines for decades, following on from work done by Peruvians which began in the 1920s. Pictures of Maria in the museum, which is in her former home, show a woman who looks tough as nails even as she’s mapping the decorated desert in a skirt. 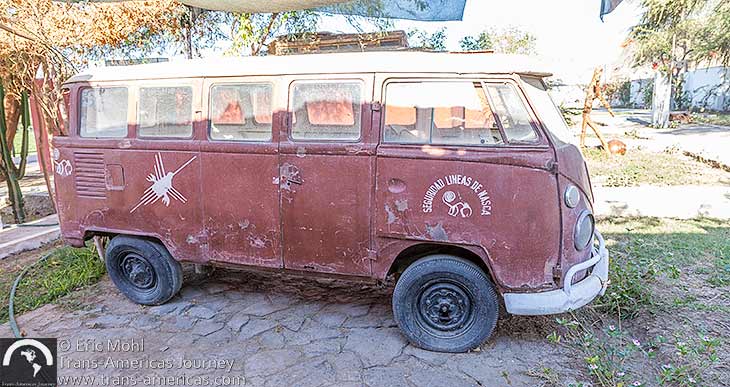 This van was used by Maria Reiche, aka the Lady of the Lines, as she mapped and advocated for the Nazca Lines. We love that the van has “Nazca Lines Security” painted on the door.

Maria, who some people call The Lady of the Lines, also built the viewing platform over The Hands and The Tree. She is credited with mapping the lines and fighting for their protection right up to her death in 1998. She’s buried on the museum grounds. 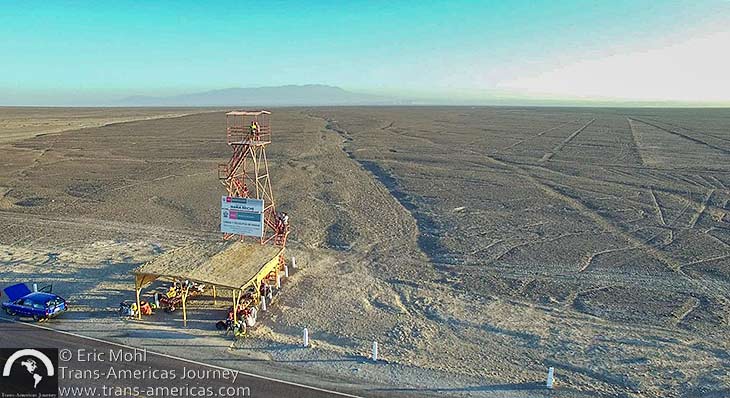 A still from our drone footage over the observation tower overlooking The Tree and The Hands.

Head about 3 miles (5 km) north of Nazca on the road that goes into the mountains toward Cuzco and you’ll find a group of glyphs called Telar de Nazca (The Loom of Nazca). After walking up a small rise at this site (10 PEN or about US$3) you can look down on a formation called Las Agujas (The Needles), but the best part is the view of the massive Cerro Blanco in the background.

Cerro Blanco is said to be the world’s highest sand dune at 8,884 feet (2,708 meters), though a dune in Oman and another in Namibia have also been called the world’s tallest. Guided trips take travelers up the dune (about a three-hour hike) before sandboarding down. 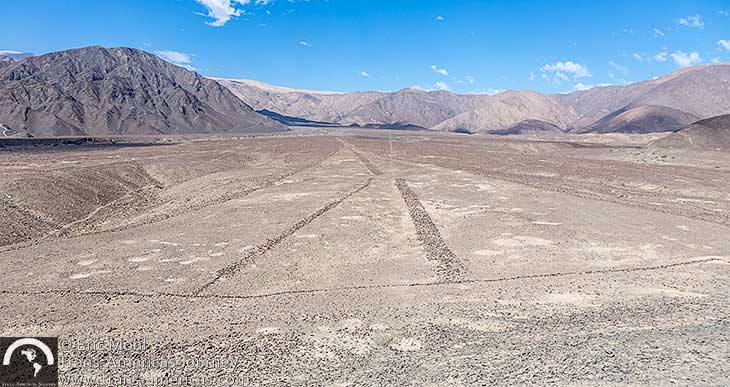 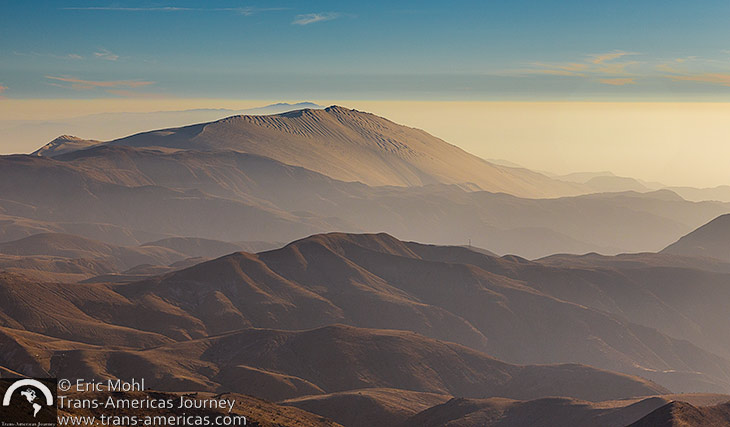 Nazca isn’t the only town with massive, mysterious glyphs. Continue past the Maria Reiche Museum on the PamAm away from Nazca and you’ll see a turn off to the left that leads to another viewing platform. This one is positioned over a configuration of glyphs on a hillside called The Family (2 PEN or about US$0.65). This set of glyphs was not included in our flightseeing tour at all and was not made by the Nazca people but by the Paracas people. 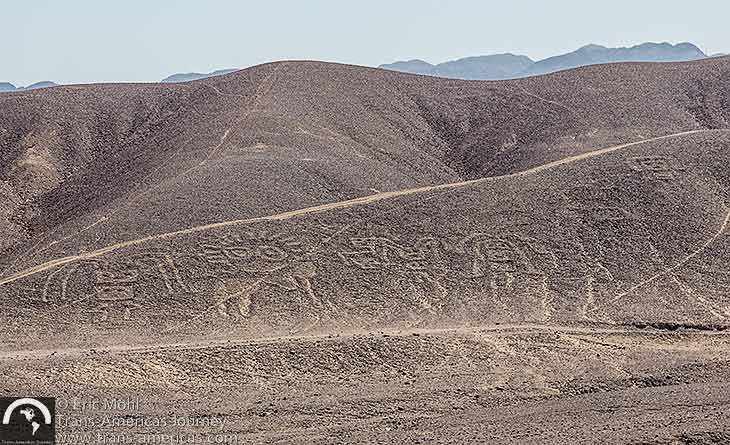 The Family glyph, part of the Palpa Lines made by the Paracas people, as seen from an observation tower.

Additional glyphs near The Family.

Return to the PanAm and keep traveling away from Nazca to the nearby town of Palpa to find more of the so-called Palpa Lines made by the Paracas people. Follow the signs that lead you out of town and down a short dirt road to arrive at a hilltop viewing platform over a glyph called The Sundial. 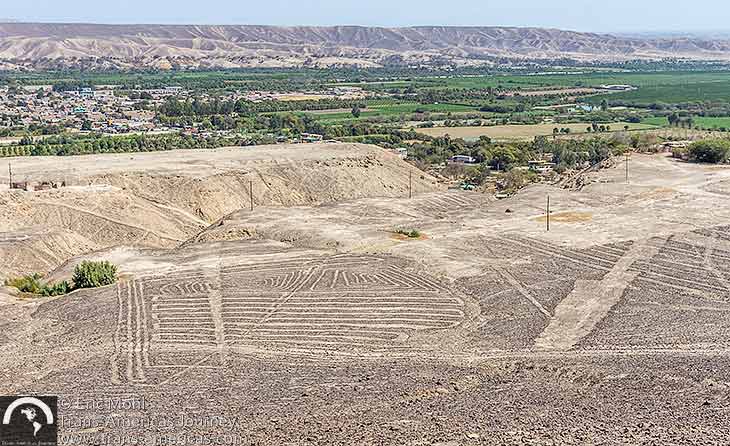 The Sundial, as seen from a hilltop observation tower in Palpa.

Palpa is also known for its oranges, so be sure to stop for a glass of fresh-squeezed juice at one of the roadside stands.

Our drone video, below, will give you a look at The Clock, along with The Hummingbird, The Tree, The Hands, The Family, and The Spider.

The Nazca Lines under threat

New glyphs are still being discovered in Nazca and despite protections, all of the glyphs are still threatened. When the Pan-American Highway was built it bisected some glyphs and we can’t help but wonder what the Nazca spirits (or the aliens) think of this new never-ending line among their own. Wind continues to erode the glyphs and humans are still doing damage as well. In 2014 Greenpeace, for example, apologized for damage done to The Hummingbird glyph by activists who unintentionally walked over it to install a message about climate change.

Where to sleep in Nazca

It must be said that the dusty, ramshackle town of Nazca is pretty grim, but thousands of travelers come anyway to see those famous lines. That means there are a lot of hotels in town from extremely basic hostels to higher-end offerings catering to organized tour groups.

Somewhere in the middle is B Hotel Nasca Suites (doubles around US$40). Opened in 2017, this place is right across the highway from the airport (convenient for morning flightseeing) but about a mile from town. There’s a pool and full breakfast included, along with Wi-Fi, and more style than most mid-range places in Nazca.
Book Now

There’s even more about the Nazca culture in our post about the archaeological sites around Nazca.