Day 45 of our Journey

There are many iconic places in the world and the danger with such places is that the fantasy in your head becomes so perfect that the reality can never hope to match it. Not so with Niagara Falls and the Erie Canal which deliver on their promises to wow you no matter how much you’ve anticipated their watery thrills. 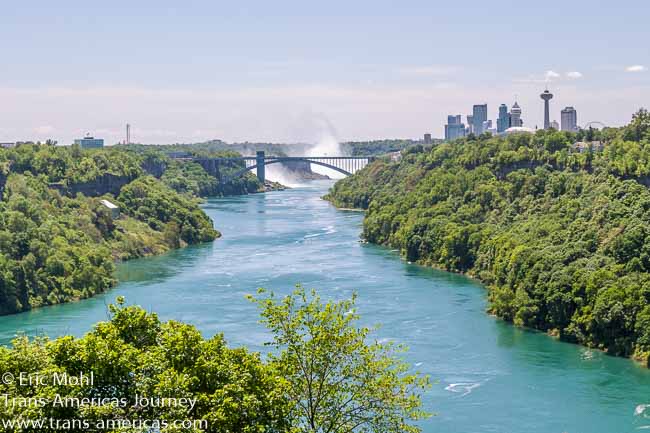 Horseshoe Falls and the American Falls as seen from downriver. 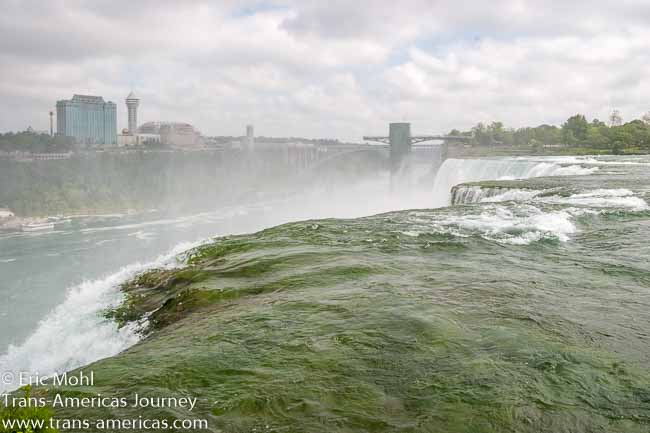 Walkways in the Niagara Falls State Park let you get this close to the top of the American Falls before it spills over the edge. 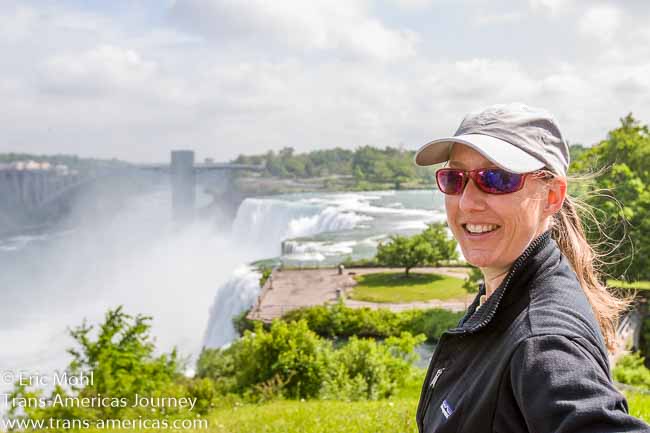 Karen in front of the American Falls. 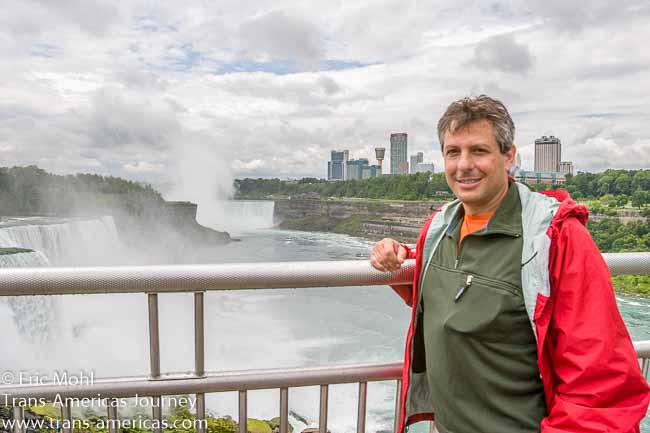 Eric downstream from Horseshoe Falls at the American Falls. 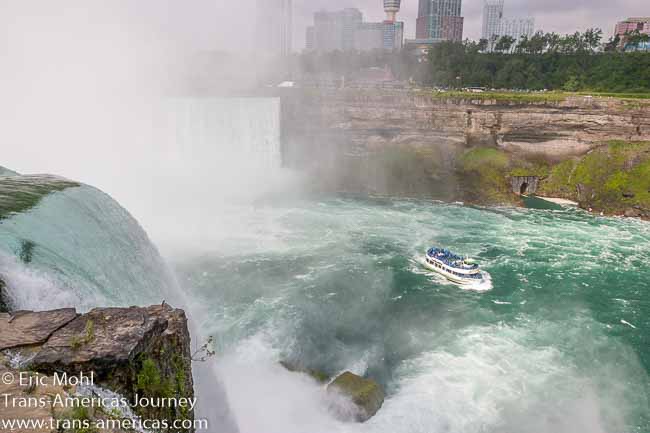 The Maid of the Mist boat ride takes you even a bit closer than this to the base of Horseshoe Falls. 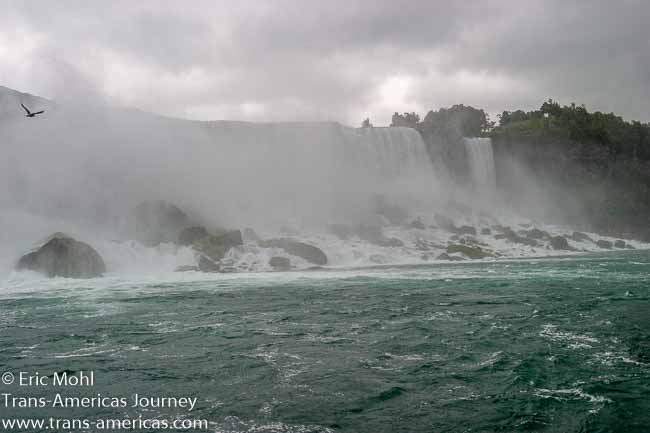 Passing by the base of the American Falls on the Maid of the Mist boat tour. 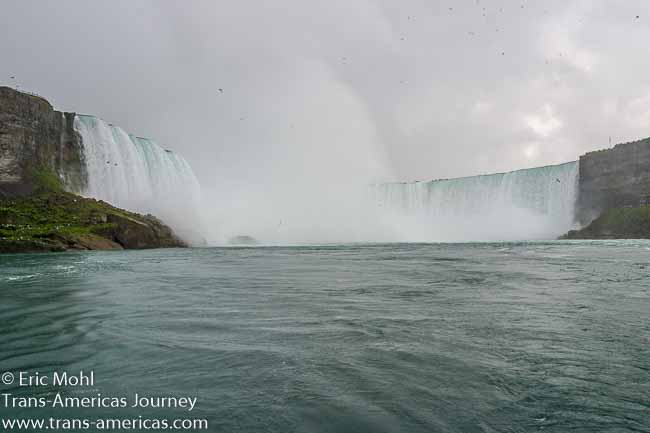 Approaching Horseshoe Falls on the Maid of the Mist boat tour. 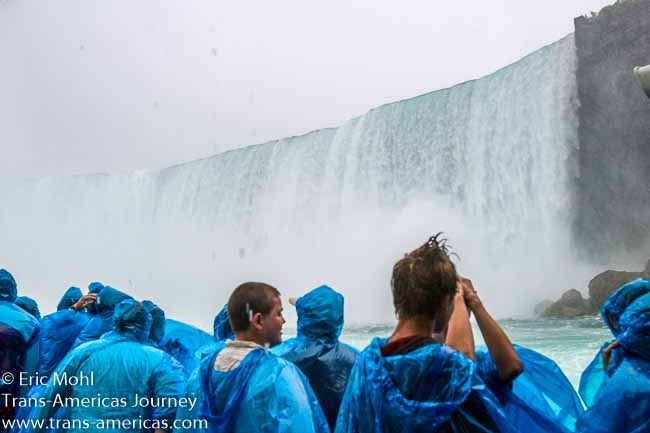 Tourists getting what they paid for on the Maid of the Mist boat tour to the base of Horseshoe Falls. 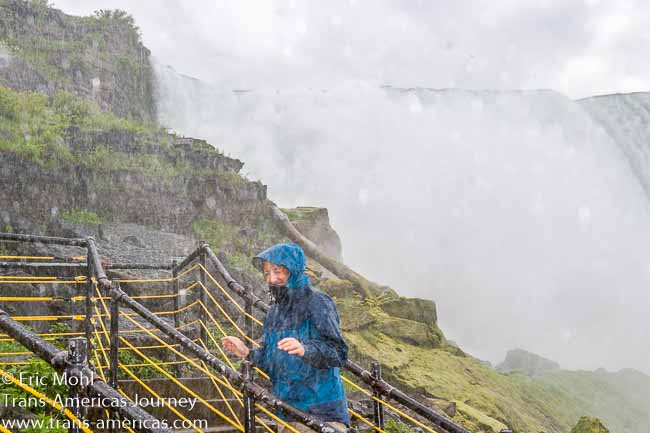 Karen getting drenched as the wind shifted and doused her with water from the American Falls.

Before you pay to park in the official lots, check out Goat Island which is part of Niagara Falls State Park and has free parking areas. And you can enjoy a mini-Cave of the Winds experience without the admission fee simply by climbing up below The American Falls via the staircase that is accessible as you get off the Maid of the Mist boats.

After drying off after our Maid of the Mist boat ride, we headed for Lockport, an aptly named town famous for its Erie Canal locks. Though all the locks on the canal are still in working order and still manned, the canal is no longer the main artery of transportation as it was in its pre-interstates heyday. 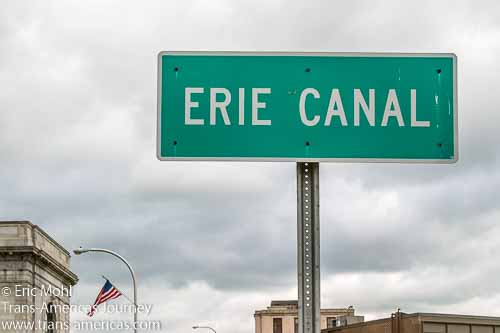 Arriving at one of many access points on the Erie Canal.

Today, the Erie Canal is largely used by private individuals navigating their way lazily up and down stream and by local tour companies. We made it in time for the last cruise of the day with Lockport Locks & Erie Canal Cruises. 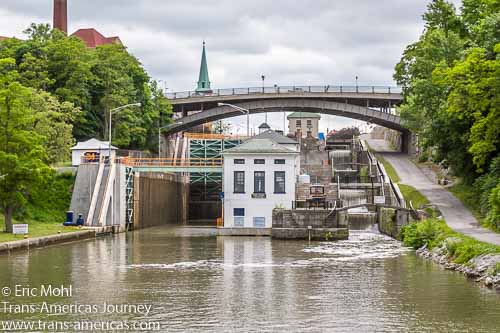 Step 1: Approaching Lock 34 with the original, much smaller stone lock still standing to the right. This old lock was part of a group called the Flight of Five since it took five of them to do what the modern Locks 34 and 35 do today.

The two-hour tour took us upstream through locks 34 and 35. From the top deck of the boat, we got a real sense of the genius of the canal locks system as we watched nothing more than the power of water being transferred from one level to another raise us 49 feet (15 meters) in just a few minutes. 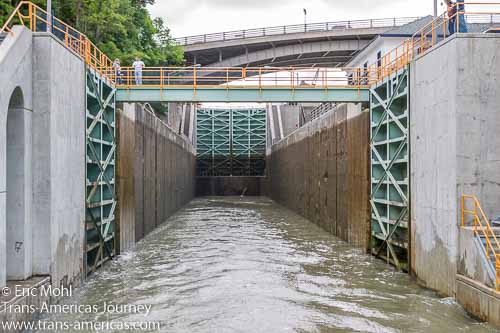 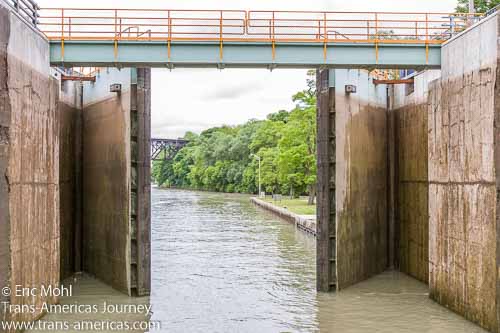 Step 3: The giant lock doors close behind us. 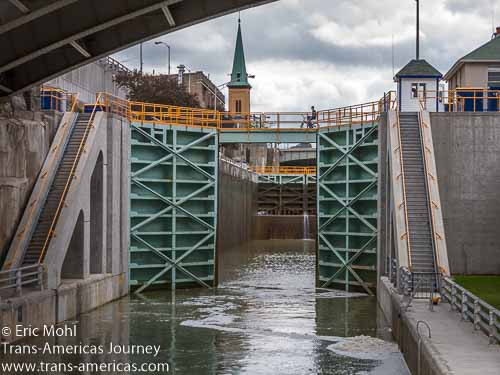 Step 4: We’ve risen half way up and the giant lock doors between lock 34 and 35 open so we can enter lock 35 for the final half of our rise to the top. 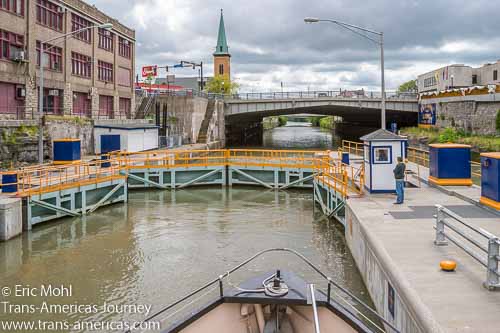 Step 5: Just a few minutes after being closed into Lock 34 and 35, we’ve risen 49 feet (15 meters) to meet the level of the Erie Canal in front of us and we’re ready to exit the lock and continue on our way.

After meandering upstream, to the somewhat annoying accompaniment of recordings of old-time canal songs, we passed slowly under Canal Bridge, said to be the world’s widest bridge at 399.5 feet (121 meters). Then we turned around and passed back through locks 35 and 34 which lowered us down 49 feet (15 meters) to the same water level from which we started.

If you don’t have two hours to spend experiencing the locks from the deck of a boat, stand on the Pine Street bridge in Lockport and watch the action from above. It’s an awesome vantage point and completely free. 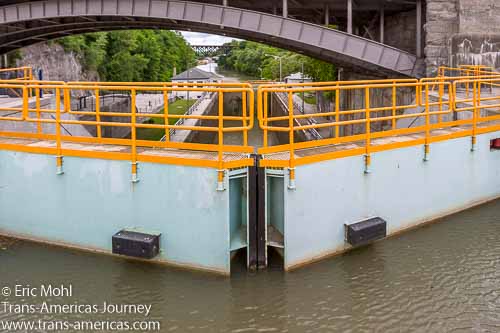 Giant lock doors like these hold back tons and tons of water as ships are raised and lowered along the Erie Canal. 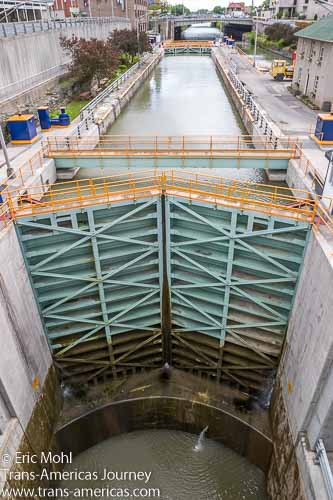 The dramatic difference in the water level at some of the Erie Canal’s most extreme locks is most clearly seen from above.

Beef on Weck in Buffalo

Back in Buffalo we decided to try a local culinary treat for dinner and headed out to Schwabl’s, which has been serving something called “beef on weck” for more than 160 years.

An uncomplicated dish, beef on weck has only two major ingredients: sliced roast beef served and a kimmelweck roll which features grains of salt and herbs on top. Add a bit of horseradish, or not. Either way it’s delicious. You can’t hardly turn around in Buffalo without someone trying to sell you beef on weck, but we urge you to get yours at Schwabl’s, as much for the quality of the food as for the chance to go back in time.

Claiming to be the oldest continuously operated restaurant in New York State (and possibly all of the US), Schwabl’s has been open since 1837. The waitresses wear white uniforms that make them look like nurses. Many of the patrons have clearly been coming there their whole lives. Best yet? The bartender is clearly devoted to old-school cocktail making. We watched him meticulously concoct a Manhattan and immediately regretted our beer and wine orders.