Inside the Indy 500 – Indianapolis, Indiana

Day 33 of our Journey

As much as we wished Karen’s dad (who watches the Indy 500 every year and is responsible for his daughter’s love of cars in the first place) was with us at the Corvette factory and Corvette Museum, and in the pre-Indy parade his presence was most painfully missed when we were standing on the Indianapolis Motor Speedway track as the official 2006 Indianapolis 500 race caller said “Lady and gentlemen start your engines!” But let’s start at the beginning, as any good race should. 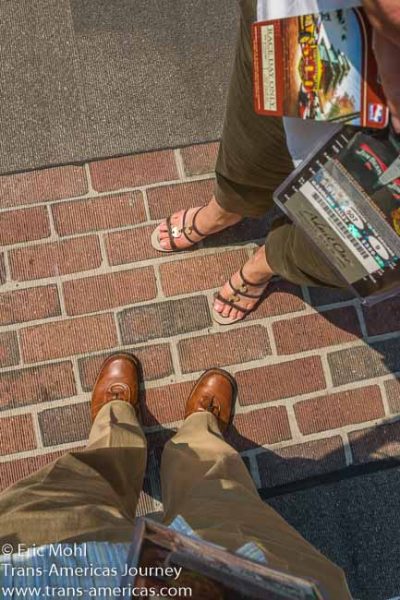 Our feet, and our awesome ‘hot’ passes, on the fabled bricks that mark the finish line on the Indianapolis Motor Speedway.

At 7:45 am we are hustled into a Chevy Tahoe with official Indy 500 decals and plates and rushed to the track via police escort—a first—and probably last—for us. Once at the Indianapolis Motor Speedway track we settled into General Motors hospitality suite before wandering out into the garage area to see what was going on in the final hours before one of the most storied races in the world. Answer? There’s so much downtime before the Indy 500 that one of the crews let Eric pick up the nose cone of their car which is, predictably, light as air. 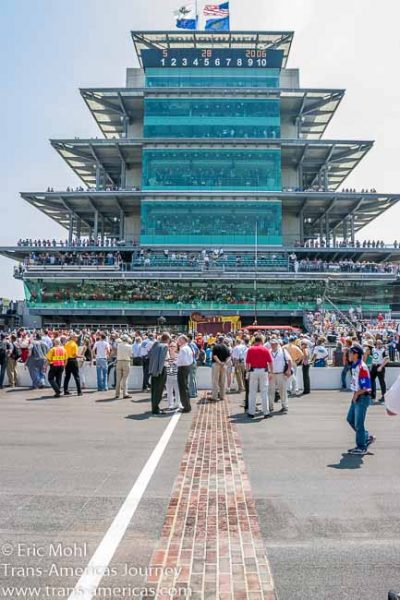 The finish line and the famed Indy Pylon at the Indianapolis Motor Speeday. 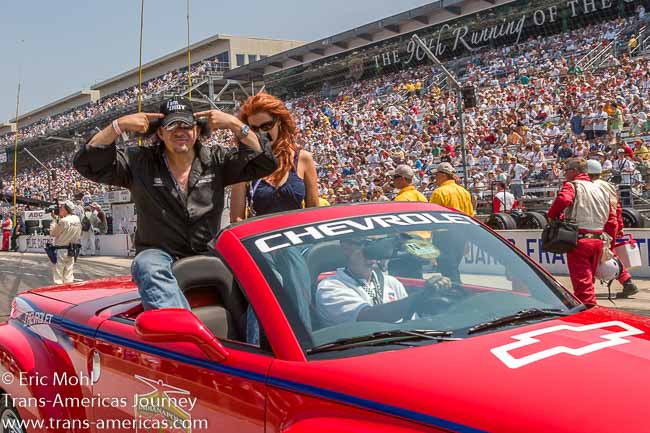 Gene Simmons, from KISS, hamming it up with his ‘I Am Indy’ cap in the pre-race parade around the Indianapolis Motor Speedway.

But there were no racers in the pits yet so we went in search of a few. Turns out, we needn’t have left the air-conditioned, catered comfort of the Chevrolet suite which was next door to the Argent suite, sponsors of Danica Patrick. 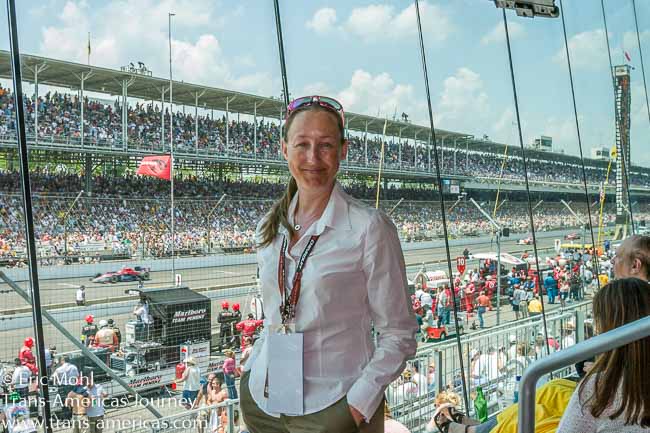 Karen in the Chevrolet Hospitality Suite at the Indianapolis Motor Speedway.

Danica is the only top female Indy driver and she finished the race in fourth position last year, securing the title of rookie of the year. She is also much hotter in person and her engagement ring is much bigger, as we could see when she entered the Argent suite and gave a very gracious, grateful speech despite what must be stomach-churning pre-race nerves. 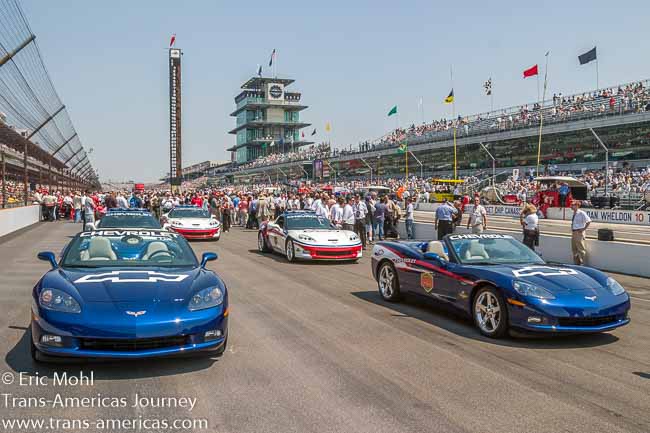 Corvette Pace Cars getting into formation in prep for the start of the 2006 Indianapolis 500.

Making the most of our hot passes

Then we come to a startling realization: in addition to the police escort and hospitality suite access, General Motors has given us hot passes. A little background: There are two types of access passes commonly doled out at the Indy. Cold passes let you onto the track and into the pits and just about anywhere else you want to go, but only until 11:30 (well before the race actually starts). Hot passes, on the other hand, let you go essentially wherever you want even after the race has started. We decide to take advantage. 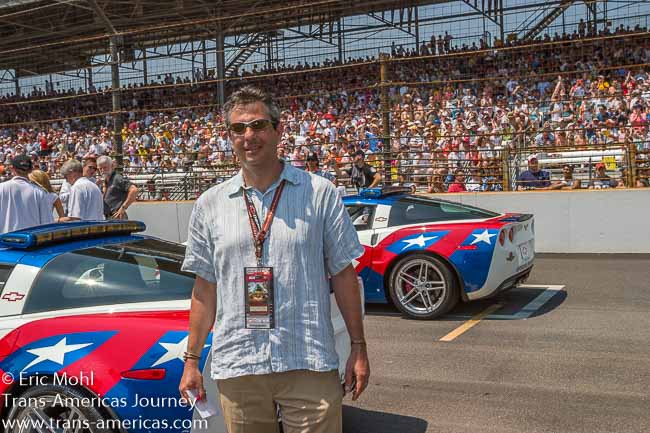 Eric on the grid just before the start of the 2006 Indianapolis 500. 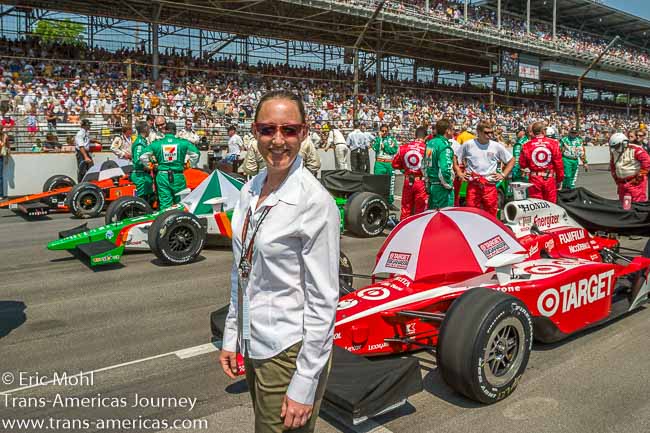 Karen on the grid before the start of the race.

Down on the track, it was 120 degrees and incredibly difficult to tell the drivers from their crews since everyone was suited up in the same flame-retardant team gear. Danica was easy to spot, however, so we watched her approach her car. 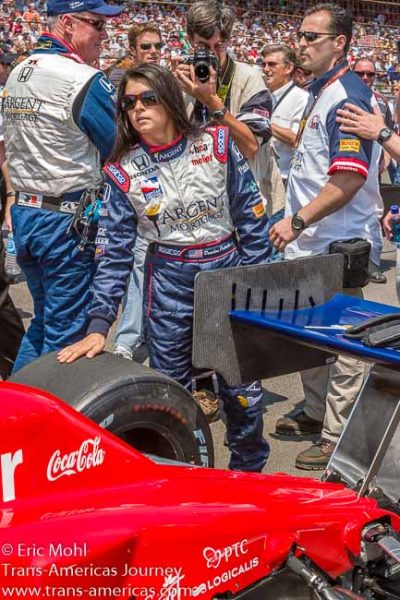 Danica Patrick touched the rear wheel of her car, then kissed her hand in a pre-race ritual.

As Danica passed behind it, she touched the right rear tire, then kissed her hand. Once she walked around the car, she turned her back on it and seemed unwilling to look at it again, preferring to focus on the friends/crew that had gathered around her. 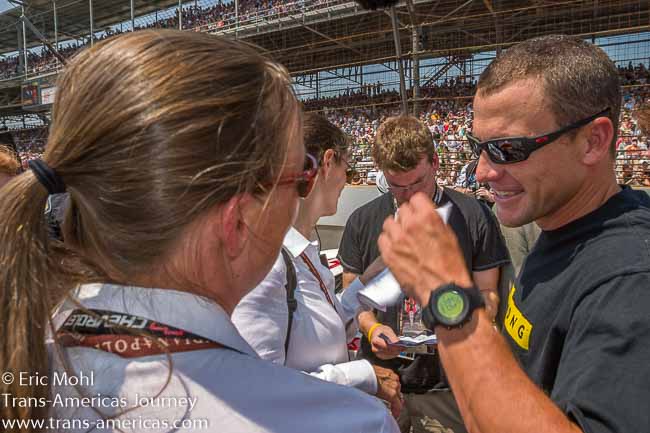 After two days of following him around, Karen finally got access to Lance Armstrong for a quick question. 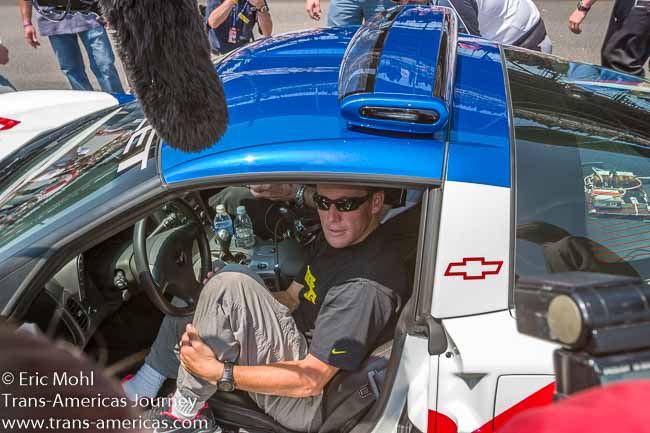 Lance Armstrong getting into the official Corvette Pace Car to lead the drivers out for the start of the 2006 Indianapolis 500.

As the photographers descended, it’s apparent why Danica’s car was the only one on the track that was cordoned off with ropes. As the shutters clicked we notice that Danica had taken off the huge engagement ring (but she does drive in her subtle wedding band). She was also sporting a spare hair band around her wrist and a medallion around her neck that peaked out of her fire suit a bit as she suddenly bent over to stretch, oblivious to the cameras that started clicking even more madly. No matter how she drives, we are impressed with her ability to keep her cool. 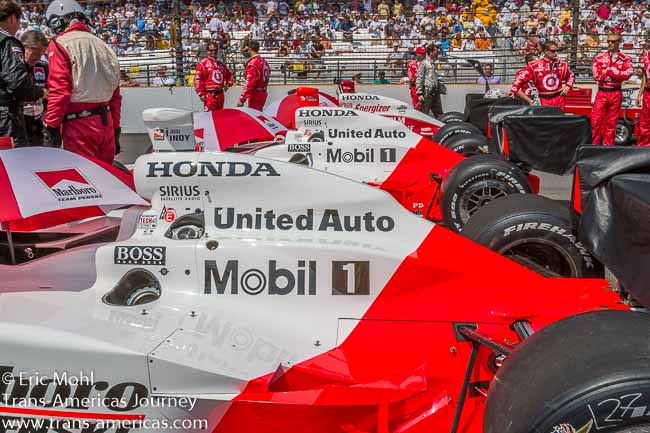 The pole position, row one cars.

Sam Hornish Jr. in his car in the poll position seconds before the start of the race that he would eventually win.

As race officials began slowly herding even hot pass holders off the track itself in preparation for the start of the race, Eric snapped one last, spontaneous picture of Sam Hornish Jr. in his car in the poll position as his crew members made last minute preparations. It turned out to be a prophetic choice. 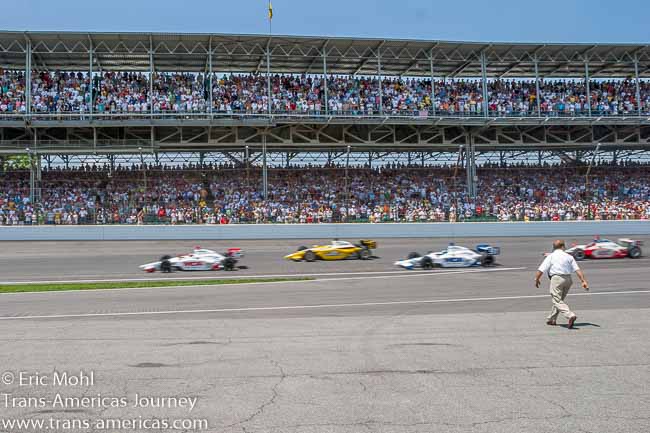 Cars flying into turn one just seconds after they passed the green flag that started the race…and we were standing on the track apron. 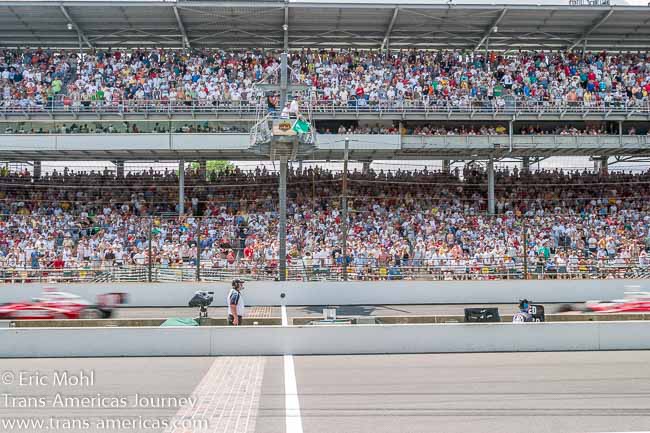 At around 200 mph (321 kmph), this is what Indy race cars look like if you don’t snap your head along to follow them.

Which brings us to the beginning of the race, which we watched from just behind turn number one—though, at that proximity you don’t so much watch the Indy 500 as feel it. It’s loud. Real loud. And the cars are just a blur even if you turn your head and try to keep up with them. And the ground shakes. Then you realize your mouth is hanging open in disbelief but it doesn’t matter because everyone else’s is too. 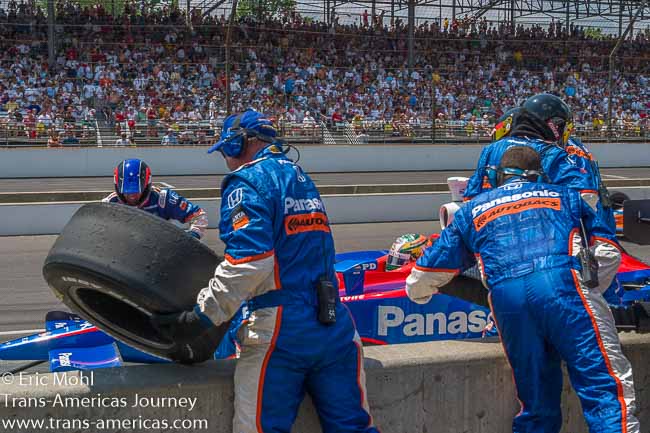 Our hot track passes gave us incredibly close access. This was shot from in the pits. 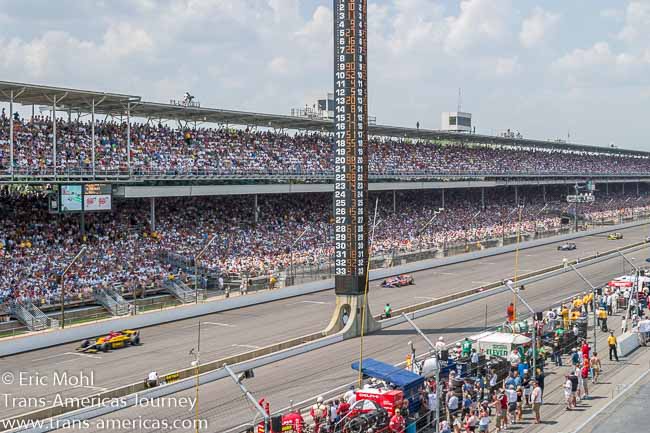 Sam Hornish Jr. with about half the laps under his belt.Though he’s not in the lead here, he did eventually win. 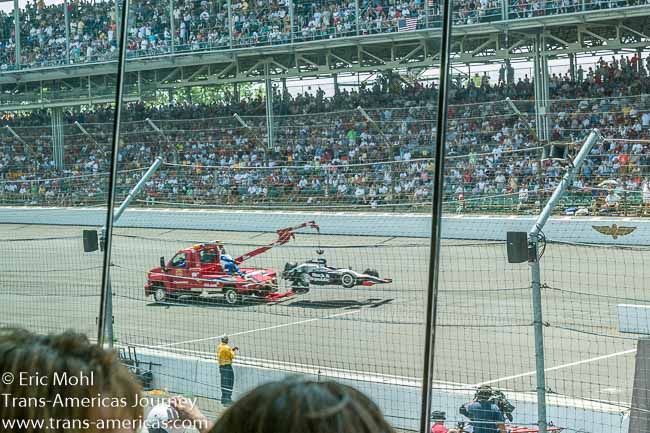 Remnants from an early crash being removed from the track.

When the heat finally forced us to escape back into the hospitality suite, we put on headsets that allowed us to listen to radio conversations between the drivers and their crews. This was (weirdly) more fascinating than watching the race going on down on the track just below us. At one point an unidentified man hollered “I’m gonna hurt someone!” Later in the race Danica can be heard insisting that she can’t push her tires any more. “They simply will not take it,” she said. Then she hit the pits for new rubber. 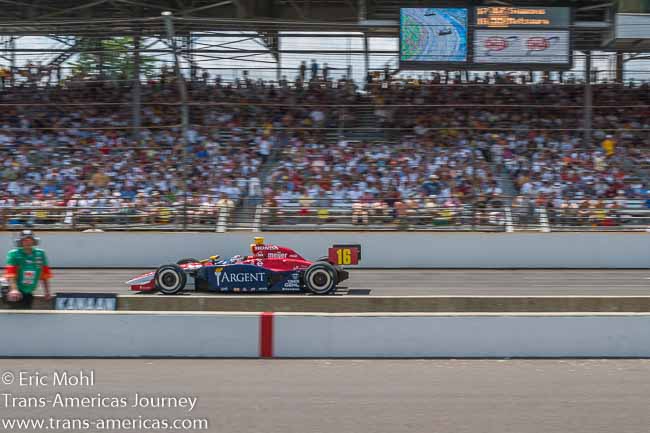 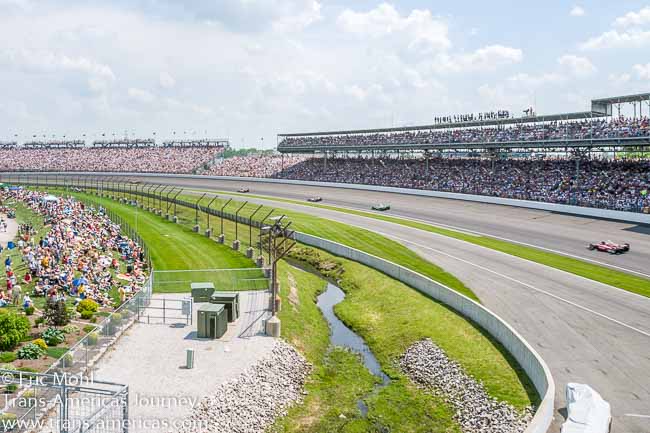 The infield, bleachers and sweeping turn one of the Indianapolis Motor Speedway.

Eavesdropping like this also made us realize just how in the dark the drivers really are. For example, when a yellow “caution” flag goes up, the drivers have no idea which car is in trouble or where on the track that trouble has occurred until someone in their crew tells them, i.e. “Number 31, Unser is out, stay high on turn three there’s debris on the low line.” 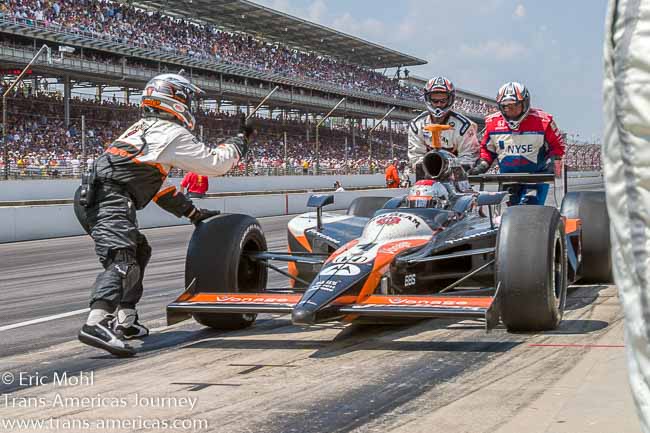 A car enters the pit…

…and about seven seconds later the car takes off again.

The day’s events might have actually been exciting enough to overwhelm the race itself if the finish hadn’t been the second closest in Indy history. With just a few laps to go, Michael Andretti (who has already raced here 14 times but never won) was in the lead with his 19-year-old son Marco hot on his heels in his Indy debut. Then Marco flew past his dad and it was his race to lose. Which he did when Sam Hornish Jr. came just about out of nowhere and dusted him at the line, winning by 0.0635 seconds. You bet the crowd went wild. 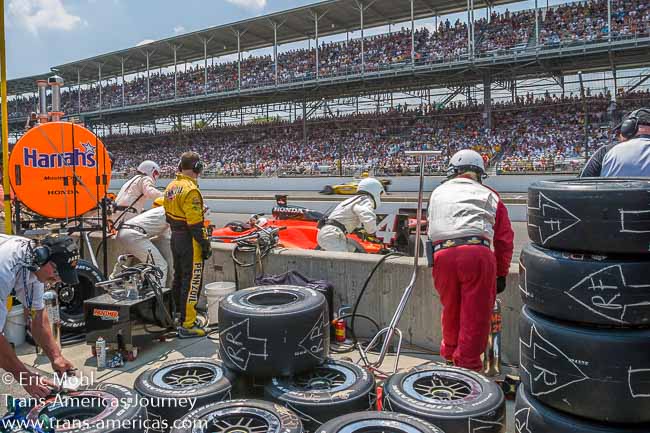 In case you were wondering, and we know you were, Danica finished eighth out of the field of 33 drivers and if anybody even thinks “not bad for a girl” there will be hell to pay. 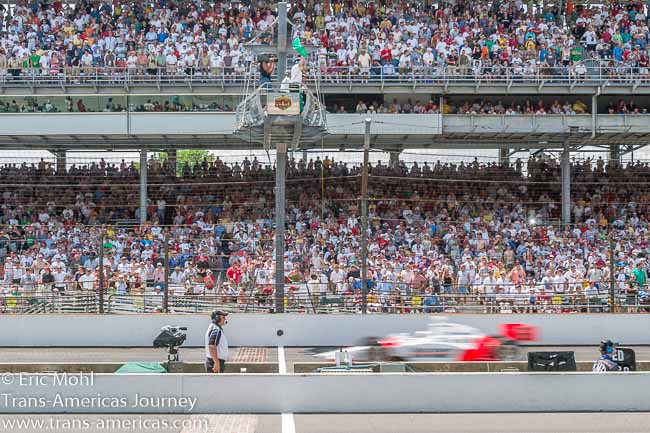 “Sam Hornish Jr. crossing the finish line….though not on the final lap.