Passenger trains are hard to come by in Latin America. Latin American trains that have been immortalized by author Paul Theroux are even scarcer. Here’s what it’s like to take a ride La Trochita, aka The Old Patagonian Express, from Esquel, Argentina. 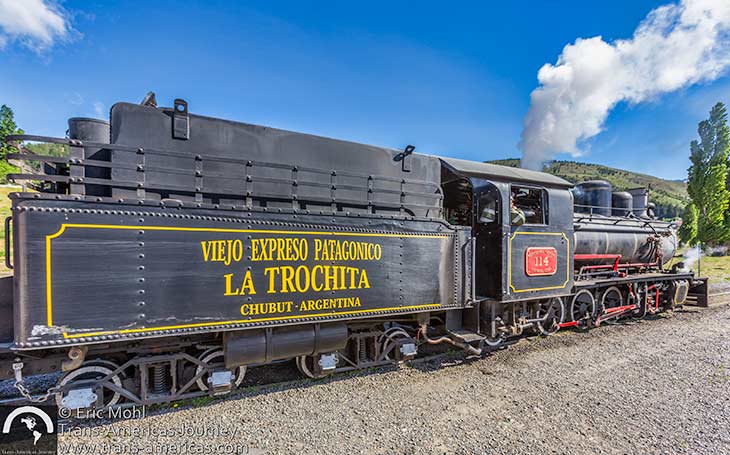 La Trochiat, aka The Old Patagonian Express, leaves the station in Esquel, Argentina.

Birth of a train

In 1908 the National Territorial Development Act was approved as a way for the Argentinean government to link and develop remote towns. In 1922 work started on 262 miles 422 km of track. Twenty years later, in 1944, train cars and engines arrived in the town of El Maiten. In 1945 train cars and engines arrived in Esquel. La Trochita, named after the narrow 29 inch (75 cm) track gauge (called trocha in Spanish), was finally up and running. 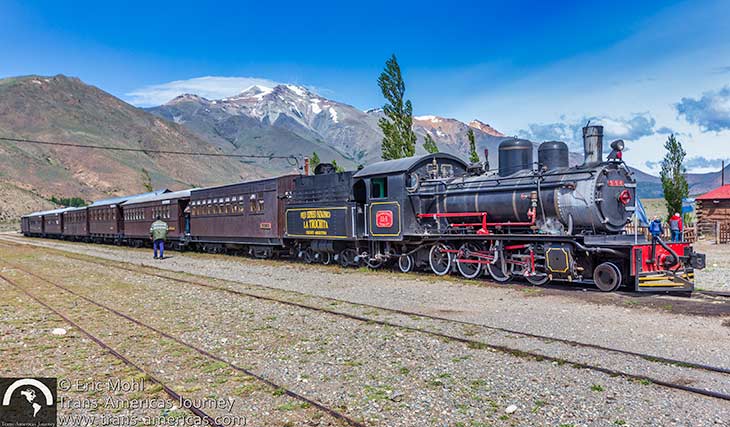 The train ran as a cargo and commuter service and gained worldwide fame when Paul Theroux’s The Old Patagonian Express was published in 1979. Though only about 30 pages of the book deal with La Trochita, many passengers bring along their copies. In 1993 the service was privatized and the train went back into service as a tourist-only service in 1994. Today, La Trochita runs with restored original cars. When repairs are needed, parts often have to be handcrafted. 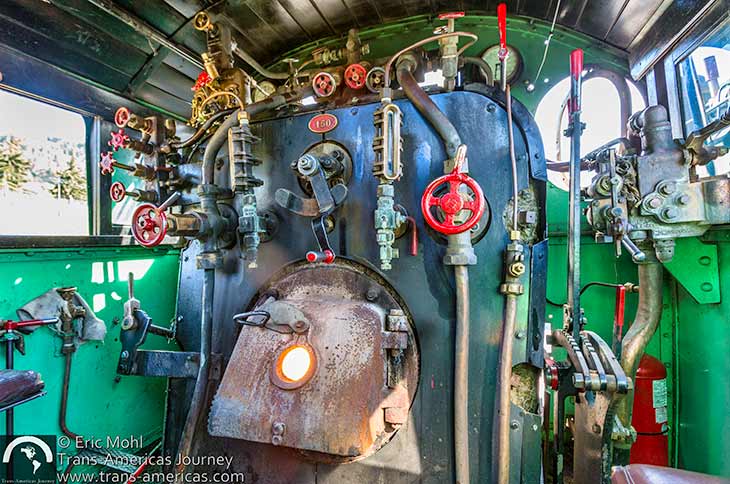 The heart and soul of the locomotive that pulls La Trochita. 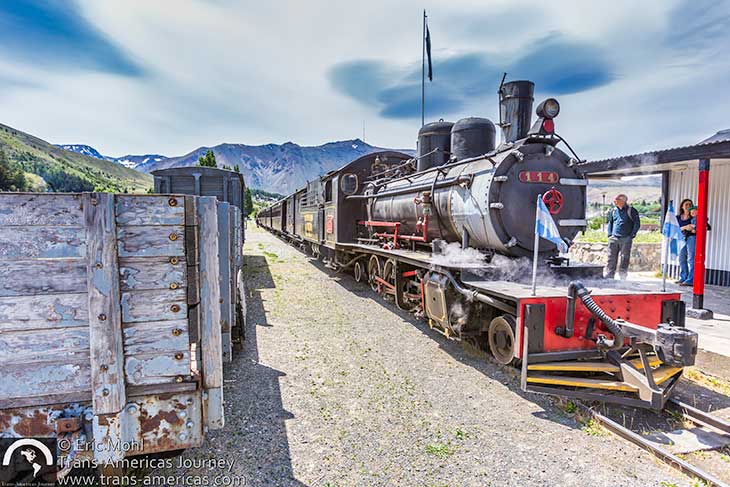 La Trochita in the train station in Esquel, Argentina.

La Trochita, aka The Old Patagonian Express, runs out of an atmospheric train station on the edge of Esquel. The station is decorated with old photos and even has a small museum of train memorabilia called the Esquel Rail Walk. 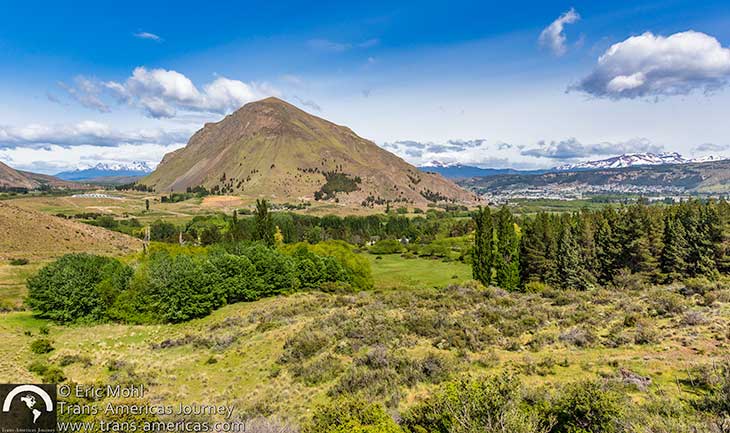 Esquel is at about 1,800 feet (550 meters) and the 11 mile (19 km) route to the Nahuel Pan station gains 650 feet (200 meters) along the way. There are 46 curves in the route, including a big one that allows for shots of the steam engine around the bend (best taken from the back of the train). Despite her nickname, the train travels at 15-18 mph (25-30 kmph). There’s nothing express about La Trochita. 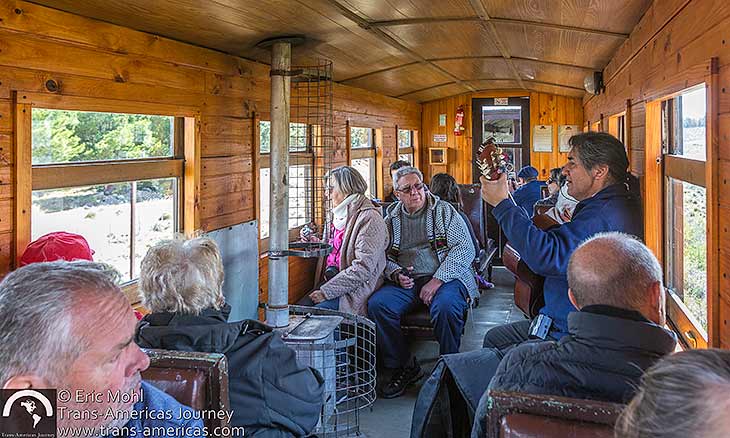 Leaving Esquel, we slowly passed by huge pastures full of sheep, cows, and horses. We saw some birds and a few maras (a rabbit-like relative of the capybara). Further entertainment was provided by a man on board with a guitar who sang a few traditional songs and tried to sell his CDs. 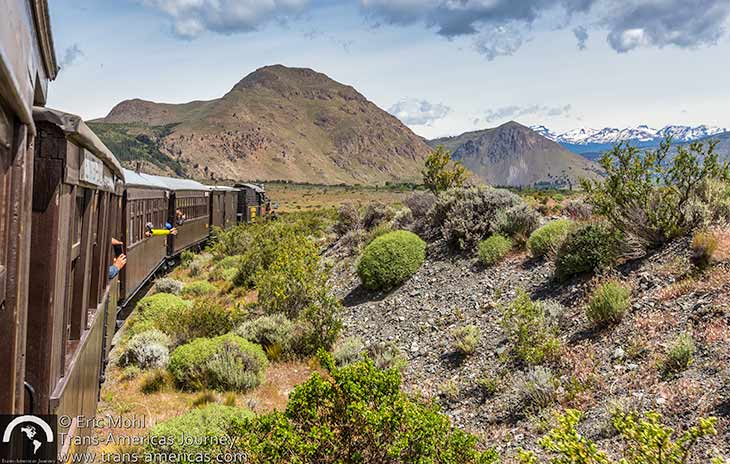 As we gained a bit of altitude, the landscape got much drier and rockier. The green pastures disappeared and we passed through a more steppe-like environment with blowing tufts of grass and few trees. 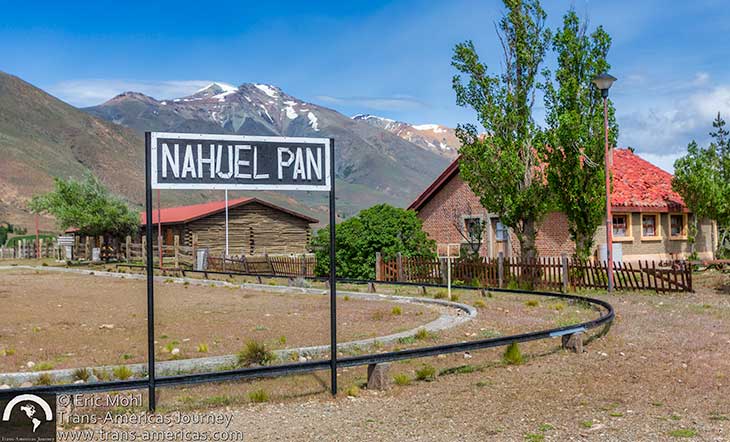 After about an hour, we arrived at the Nahuel Pan station where the wind was ripping. Someone’s yellow cat was hunkered down on the ground with its claws out like it was afraid it might be blown away. The wind was so strong that it moved the train cars. It was the kind of classic Patagonian weather that makes a steaming cup of bitter yerba mate sound good. 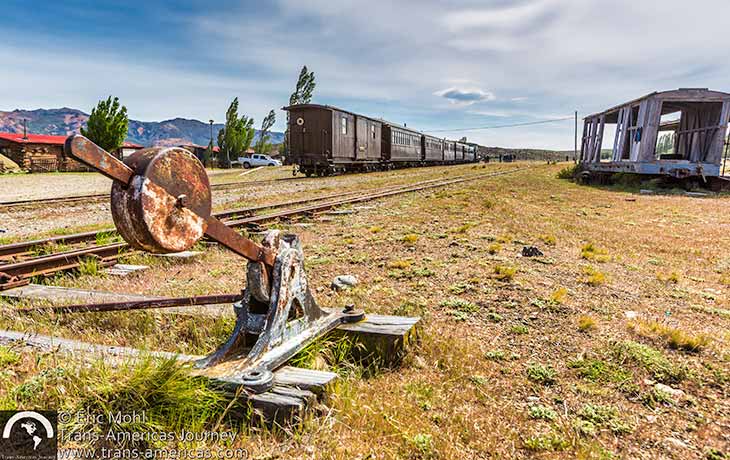 In anticipation of the arrival of a train full of tourists, the few inhabitants of the town, which is home to about 30 Mapuche families, had set up craft stands and snack stalls selling a grilled sausage sandwich called a choripan and fry bread which is like a dense beignet without the powdered sugar. There’s also a small museum here, but it was closed. 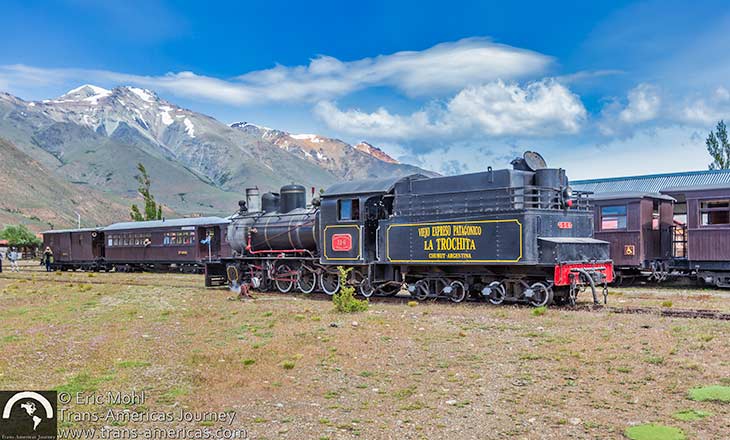 At the Nahuel Pan train station, the locomotive moves from the front of the train to the back to make the return trip to Esquel.

After about an hour at the station, the steam engine moved from the front of the train to the back of the train for the return trip to Esquel.

See the La Trochita train journey for yourself in our video, below. 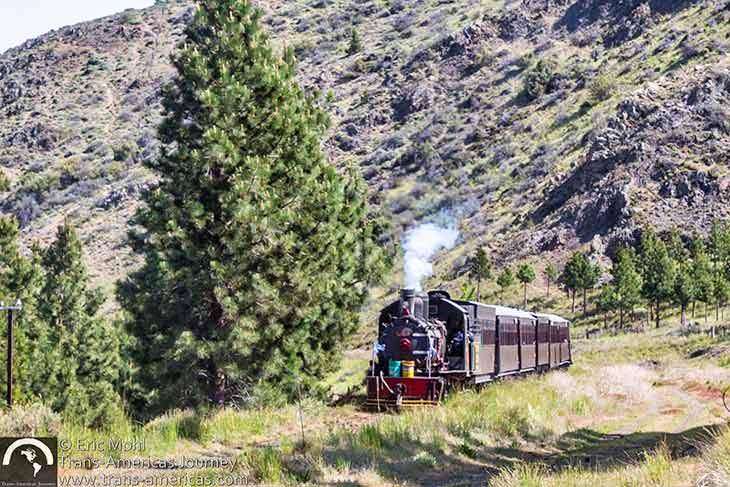 La Trochita, aka The Old Patagonian Express, may be the most famous passenger train in Latin America.

La Trochita runs all year, but the schedule includes just two days a week in low season (Thursday and Saturday from 10-1 from Esquel to Nahuel Pan and back). In summer, the frequency jumps to 12 departures per week. Tickets cost 1,260 ARS (about US$21) per person for roundtrip passage. There are first and second-class cars, but the rates are the same (first-class cars have padded seats).

All of the cars have wood or coal-burning heaters that are used in winter. There is a bathroom on the train along with a dining car with basic snacks. The steam engine now uses diesel (not coal) so there’s no black smoke. Onboard guides speak English but there are also audio devices in English and other languages (though sometimes there aren’t enough of them for all of the foreigners on board). Reservations are a must.

The small city of Esquel makes a great base for the La Trochita train trip. Here’s where to sleep and eat in Esquel.

We stayed at Las Bayas Hotel which is right in the center (we walked to the train station). It’s the only boutique hotel in Esquel and it’s got a sort of “modern motel” style, very helpful staff, a nice breakfast including eggs to order, and a lobby bar with a small but smart wine list plus Argentinean vermouth, and local beers. Rooms vary. Some are small and simple. Some have kitchenettes. The hotel also recently began offering My Pod rooms which are like boutique dorm rooms. Nice touch: a surprise sweet treat for Eric’s birthday.

Eating and drinking in Esquel

We were staring when we rolled into Esquel, so we stopped at Cervezeria Amancay which has a wide range of good craft beers on tap and does a decent (if not stellar) burger and fries (the burger needed to be cooked less and the fries needed to be cooked more).

It didn’t take long to realize that Esquel, like much of Patagonia, is full of craft beer. At Rider Brewing Bar we had a great IPA made with sauvignon blanc which made it a little bit like a juicy beer. At the Blest brewpub, we encountered more good IPA plus a nice Milanese (not too thin and not too greasy).

We also liked our grilled meat at La Barra Parrilla which has decent prices, friendly service, and more beer on tap. We were disappointed with our pasta lunch at Don Chiquino, however.

Esquel is also a good base for exploring Los Alerces National Park including the boat trip to the park’s Bosque Milenario forest.