Buy the New Hero 7 on Amazon.com

You can’t hardly leave your house these days without a GoPro HERO HD camera strapped to your head. These ubiquitous cameras have been used to document everything from jackass stunts to adrenaline-filled sports like skydiving, rappelling, surfing, waterfall kayaking, mountain biking, rally racing, snowboarding…You name it and it’s probably been GoPro’d. Now GoPro has become a bit of indispensable travel tech on our little road trip. 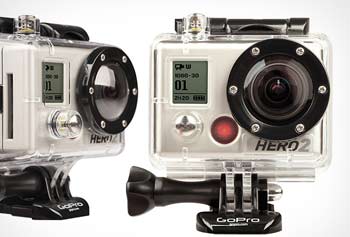 One of the most unusual uses of the camera we’ve seen so far was at the recent Festival Imperial in Costa Rica where Cypress Hill band members wore GoPros and studded the stage and instrument kits with the the cameras too. We noticed at least seven GoPros on stage and only later learned that they were using them to produce this cool Cypress Hill performance video.

We’ve set it up to take a still image every 10 seconds. We then turn those images into time-lapse video which documents our driving route as we travel through Central and South America. We put the finished video, which covers two hours of driving time per one minute of video, into our monthly Where We’ve Been road trip driving route posts so you can see what we see out there on the road, like this one below.

We’ve also used our GoPro to capture some bumpy quad riding on a coffee farm in El Salvador, swimming with whale sharks in Mexico, and riding in a submersible to 300 feet below the surface in Costa Rica, as well as whitewater rafting and zip lining around the Americas.

What makes the GoPro so popular? It’s easy to use, super small and light-weight, comes in a sturdy waterproof housing, shoots video or stills in a variety of formats, and can be mounted just about anywhere thanks to the wide array of accessories and mounting kits. 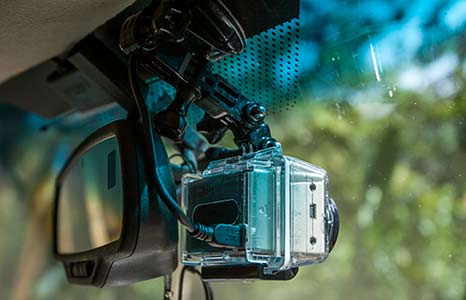 Our GoPro sitting  in our windshield shooting time-lapse video. We wired the GoPro directly into our truck’s electrical system so it has power whenever the engine is on.

In addition to the standard mounting hardware we’ve used the vented helmet strap mount, which is great for mounting the camera onto helmets. The head strap mount is good for wearing the camera on your head or for securing to a helmet without air vents. We also find the head strap mount useful for underwater use as the wide elastic band doubles  as a wrist strap. The handlebar mount is great on bikes and motorcycles. We also use the tripod mount to attach our GoPro to a tripod.

We originally thought the suction cup mount would be best for attaching our GoPro to the windshield of our truck, but it took up too much windshield real estate and in the Central American heat it didn’t always stay in place so we switched to the flat adhesive mount and it works like a charm.

A word of warning underwater

If you want to use your GoPro underwater (and you do) you will need to make sure it’s in a housing with a flat front. We found this out the hard way while diving with hammerhead sharks in Cocos Island, Costa Rica where we assumed our GoPro would take video of our dives since the standard housing that came with the camera is waterproof to 180 feet (54 meters).

Turns out, the standard housing is only meant to be used above water regardless of its depth rating. The round lens on this housing actually blurs footage underwater as can be seen in our video of sadly blurry hammerheads from Cocos Island, below.

If you have a HERO or HERO2, buy the underwater housing accessory before shooting underwater.

GoPro recently released the smaller, lighter, higher resolution HERO3 series of cameras which are 30% smaller and 25% lighter. They also have a sharper lens improving image quality and performance in low-light shooting and built-in Wi-Fi, plus the housing has a flat lens port so you don’t need a separate housing for underwater shooting.

Here are more of our travel gear and travel tech reviews