The cradle of Mexican Independence is now the country’s hottest place to live thanks to a high standard of living, good wages, booming infrastructure, safety, and more. Santiago de Querétaro a UNESCO World Heritage site, is also a great place for travelers offering history, boutique hotels, restaurants, and more all within two hours of Mexico City. It’s all in our Querétaro travel guide. 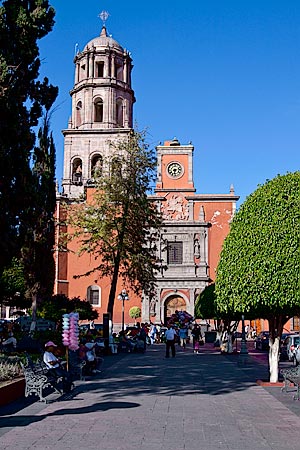 San Francisco de Querétaro, the city’s main cathedral, seen from the Jardin Zenea which is one of the city’s many lively plazas.

Querétaro, the capital of revolution

Querétaro (no one calls it by its full name) is currently Mexico’s fastest-growing city, filling up with hip urban refugees faster than you can pronounce the name of the damn place. But Querétaro’s most famous influx of people didn’t come looking for a chic wine bar or a cool hotel.

In 1810 Josepha Ortiz de Dominguez, also known as La Corregidora, and her compatriots came to Querétaro to plot a revolution. Though their plan was eventually discovered, the Querétaro conspirators captured, and their co-conspirators in neighboring areas warned, this is considered one of the earliest actions of the Mexican Independence movement.

In 1847, Querétaro was made capital of the Republic when the US invaded during the Mexican American War. On May 30, 1848, the two countries ratified the Treaty of Guadalupe Hidalgo in Querétaro, which called for Mexico to give half of its territory to the United States including vast areas encompassing what’s now California, Nevada, Utah, Arizona, parts of Colorado and New Mexico. 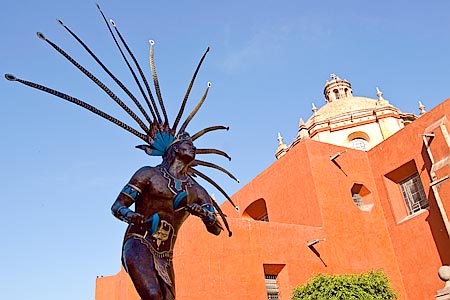 A sculpture of an Aztec below the dome of San Francisco de Querétaro, the city’s main cathedral.

Querétaro became the capital of the Republic again on February 5, 1917 when the Proclamation of the Political Constitution of the United Mexican States was established by President Venustiano Carranza at the Constitutional Congress in the city’s Teatro de la República. The Constitution remains in force to this day. 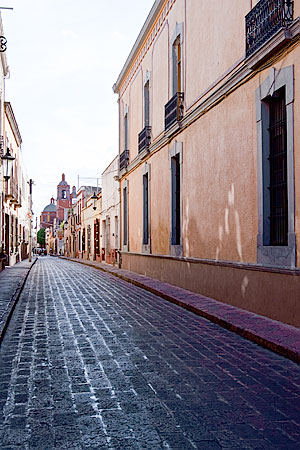 The historic center of Querétaro is filled with colonial buildings all protected by its World Heritage site status.

In 1996 the historic zone of the city was designated a UNESCO World Heritage site which has protected and preserved Querétaro’s colonial look and feel. Happily, the city is also in the process of burying downtown power lines which will eliminate the ugly overhead tangle of wires. 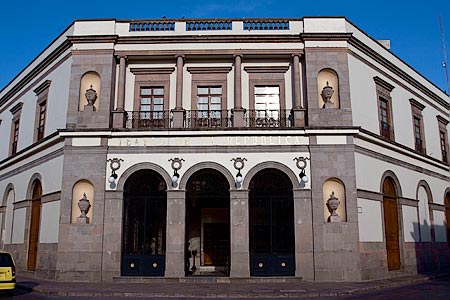 Though not the most spectacular theater we’ve seen in Mexico, the Teatro de la Republica may be the most important. This is where the Mexican Constitution was signed in 1917 and where the PRI, Mexico’s ruling party for most of the country’s modern history, was organized. It’s also where Emperor Maximillian was sentenced to death. 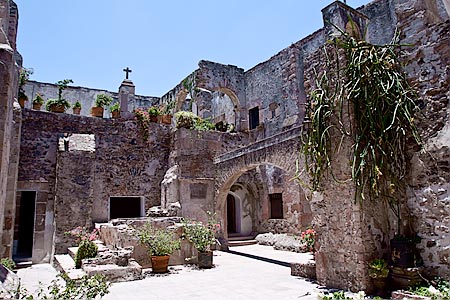 The beautiful Convento de la Santa Cruz, founded in 1654, was one of the most important missionary colleges in New Spain and many friars set off from here to found important missions throughout the Americas, including Junípero Serra who walked to Alta California and founded the missions of California. Antonio Margil, who founded the missions of Santa Fe and Albuquerque, also left from this convent.

Following the Spanish conquest, the Querétaro area–strategically located on the route that connects the mining areas of Guanajuato, San Luis Potosí, and Zacatecas with Mexico City–became a kind of base camp for Catholicism with many convents springing up to house and educate monks and, to a lesser degree, nuns who then fanned out from Querétaro to conquer the north of the country and convert local people to the Catholic faith.

One extreme example is Franciscan Junípero Serra who left Querétaro for Alta California on foot and ultimately founded many of the major cities in what became California, including the city of San Francisco. This role in the northward spread of Catholicism explains why downtown Querétaro has so many religious sites. 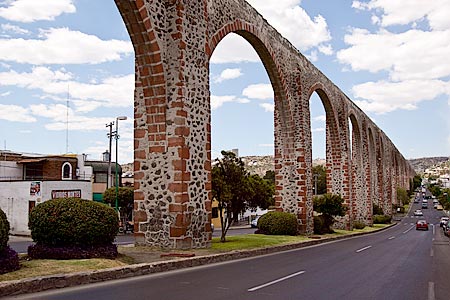 Querétaro’s Aqueducto is almost a mile long, more than 80 feet tall and has 74 arches. At one time it fed 60 public fountains and many private ones.

Shades of Rome in Querétaro

During our time in Querétaro we couldn’t shake the feeling that we were in Rome. Okay, not literally, but Querétaro, like Rome, was built and populated thanks to an elaborate aqueduct system which, at one time, fed 60 public fountains and many private ones. You can still see working fountains around town.

There are also statues all over the place and the people who live here have a real fondness for snacking in open-air cafes–just replace the ubiquitous Italian panini with a gordita, a local specialty that’s essentially a fried corn batter pita pocket stuffed with whatever you like, and you’ve got it. In Querétaro, the gorditas are even served with oregano.

There’s also an ice cream shop called Neveria Italy where you can get a delicious concoction called wine ice. 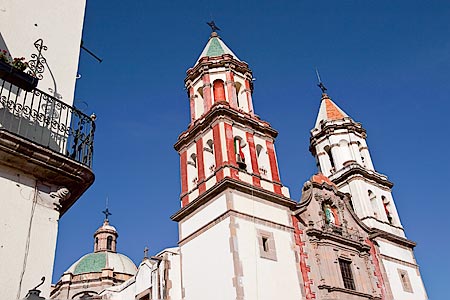 This church’s domes and towers are covered in red, green, and white tiles in homage to the colors of the Mexican flag. Some tourists, however, see the colors and think it’s in reference to Italy.

Where to sleep in Querétaro, Mexico

This city is full of sleeping options. We stayed at two boutique hotels in Querétaro including the Dona Urraca and the art-filled La Casa del Atrio which you can learn more about in our piece about La Casa del Atrio for National Geographic Traveler.