Spotting quetzals during our time at Ranchito del Quetzal was eerily easy. All we had to do was get out of bed at first light and stumble down to the restaurant where as many as 10 quetzals at a time dutifully came out to greet us. However, our next attempt to see these technicolor birds, at Chelemhá Cloud Forest Reserve, was much harder work right from the get-go. 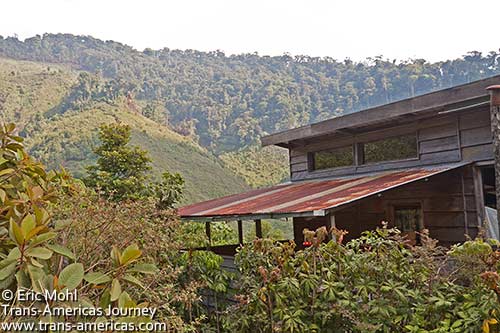 Chelemhá Lodge with just some of the land that’s protected as part of the Chelemhá Cloud Forest Reserve in Guatemala.

First there was the matter of getting to the privately owned and run Chelemhá Cloud Forest Reserve, a 400 acre (172 hectare) chunk of land in the Yalijux Mountains in the Alta Verapaz region of Guatemala. We’ve driven to many places on the Trans-Americas Journey where we were told we’d need our 4×4 toughness. Often we got to the end of the road and realized that a rental car could have handled the road. Not this time.

We waved goodbye to pavement just a few miles past Ranchito del Quetzal and turned onto a well-graded dirt road. The biggest obstacle on this section was the number of road work trucks and pieces of big machinery since teams were busy prepping this section for pavement. Roughly two hours later we reached the town of Tucuru and turned off toward the reserve.

Road conditions remained perfectly acceptable until we reached the tiny town of Nuevo Vinaroz where the road took a turn for the worse with very deep ruts and seriously big rocks. From here on out the road was quite rough but mostly no big deal as long we drove very, very slowly. More or less three hours into the journey steep inclines were added to the mix as we climbed up above 7,500 feet (2,300 meters) where the reserve is located.

Some sections of the road were so steep that concrete strips had been poured on the ground at roughly wheel width for traction. We actually nearly overheated the engine for the first time on the entire Journey during some particularly slow, steep climbs and we had to pull over three times to let the engine cool down which gave us time to admire our surroundings and not just the road ahead.

We reached the reserve about four hours after turning off the pavement and it took about 10 seconds to fall in love. The narrow,  three-story, all-wood Chelemhá Lodge seems to spring out of a steep, tree-covered incline–not exactly natural, but totally appropriate.

Opened in 2005, profits from the lodge, which is owned and managed by a conservation group called Unión para Proteger el Bosque Nuboso (Union for Protecting the Cloud Forest) or UPROBON for short, are used to maintain the current reserve, enable the purchase of more land for protection and to fund projects including reforestation (UPROBON has planted more than 40,000 trees so far), local staff training, and collaborations with the local Mayan Q’eqchi’ community including an eco-education program.

However, supporting land conservation and animal habitat, spreading eco-awareness and enabling the local Mayan community aren’t the only reasons to visit the lodge. 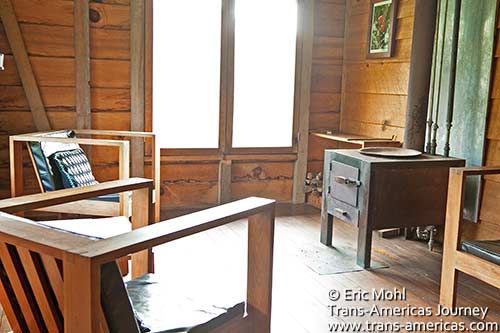 The cabin chic of Chelemhá Lodge in the remote Chelemhá Cloud Forest Reserve in Guatemala.

Chelemhá’s Swiss/German ownership is evident in the simple yet gorgeous and efficient design and craftsmanship of the four room lodge which was made primarily from wood salvaged from fallen trees on the property. The construction has a minimalist, arts-and-crafts look and feel with hand made furniture, handy built-ins everywhere, a central circular staircase and clever nooks and crannies that make the most of the small spaces.

Even the candles (there’s no electricity) are handmade using the waxy fruit of the arrayan tree, just as the Mayans do. Shoes are not allowed inside the lodge (bring inside shoes or non-slip socks or slippers) and there’s a stash of rubber boots for use outside when it’s wet and muddy. This is a cloud forest after all. 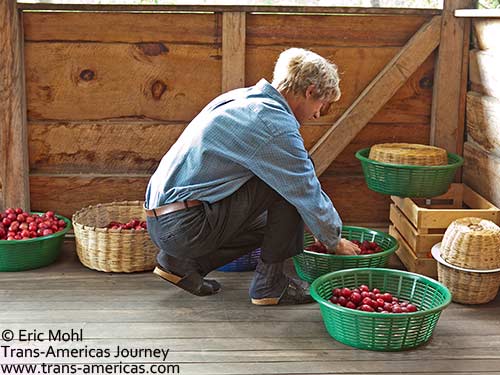 Host, conservationist, organic farmer, and cook Armin Schumacher with some local, organic plums he was about to turn into delicious cobbler and jam at Chelemhá Lodge in the remote Chelemhá Cloud Forest Reserve in Guatemala.

Meals are prepared in an open kitchen using ingredients grown on an adjacent organic farm by host/manager/conservationist/cook Armin Schumacher, a Swiss man who’s been here for 14 years. The whole place is heated by a big cast iron wood-burning stove which also heats all the water needed for showers and cooking. 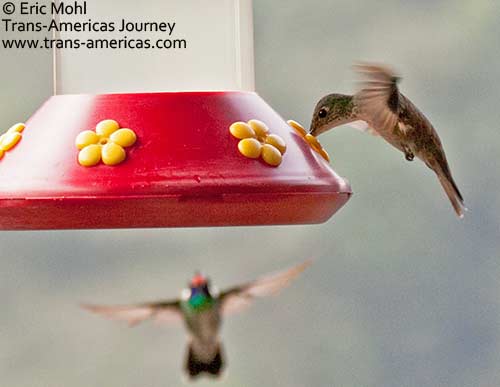 Two levels of the lodge have wrap-around decks with feeders on every corner. These attract at least half a dozen different types of hummingbirds. So many hummingbirds visit the lodge that Armin has started collecting donations for the sugar he needs to make the syrup these tiny birds consume at an alarming rate. 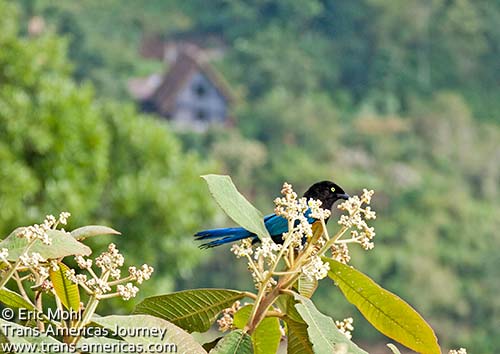 A bushy crested jay near the lodge.

Hummingbirds and jays are great, but we’d driven up to Chelemhá to see quetzals. The morning after our arrival we got up at 4:30 am, roused by the dinosaur-like sounds of a troop of howler monkeys and the delicious smells from the kitchen where Armin was busy making an enormous breakfast of fruit, granola, homemade bread, strong coffee, steel-cut oatmeal, and eggs. 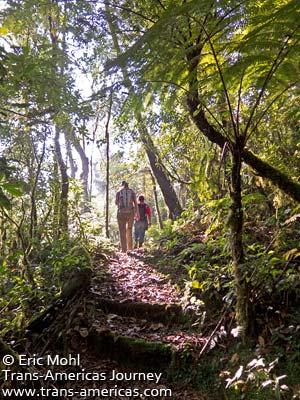 Hiking up to find quetzals in land protected as part of the Chelemhá Cloud Forest Reserve in Guatemala.

At 6 am local guide Rojeño arrived and we headed up, up, up into the high reaches of the reserve. A three mile (4.5 km) trail switch-backed its way past a few agricultural plots, into secondary growth forest making a comeback now that it’s protected then into dense primary cloud forest. Suddenly we were surrounded by enormous old giants which remind us of the sequoias in California–only here they’re draped in moss and mist.

This is where the quetzals thrive and it wasn’t long before Rojeño pointed out a tree trunk with the top missing. Though it was still rooted in the ground, the tree was dead and hollow. About midway up the trunk there was a round hole and inside that hole was a quetzal nest.

We staked out the nest and, after about half an hour, a male quetzal emerge from the hole and flew to a nearby branch where he began calling, flicking his elegant tail with every chirp. Incredibly, the bird remained on the branch for another 30 minutes, undisturbed by our picture taking. At times it almost seemed like he was posing. 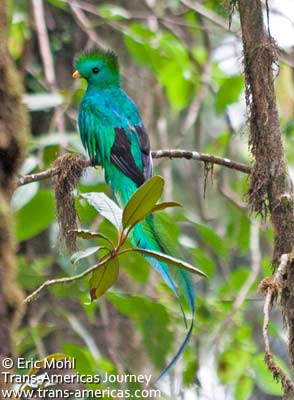 This male Quetzal emerged from its nest in a hollow tree trunk then posed for us on a nearby branch in the Chelemhá Cloud Forest Reserve in Guatemala.

We saw two more quetzals in the upper reaches of the reserve before descending back down to the lodge, satisfied. 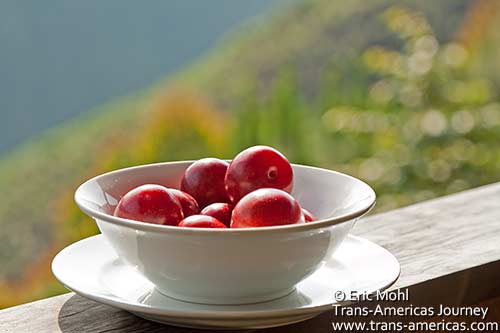 Organically grown plums from the neighboring farm which supplies food to the Chelemhá Lodge in Guatemala.