Poor Veracruz state. While other areas of Mexico inspire at least some recognition around the world, most people don’t know much about this area of Mexico. For example, did you know that you will find some of the best white water rafting in Mexico in Veracruz state, near Jalcomulco? 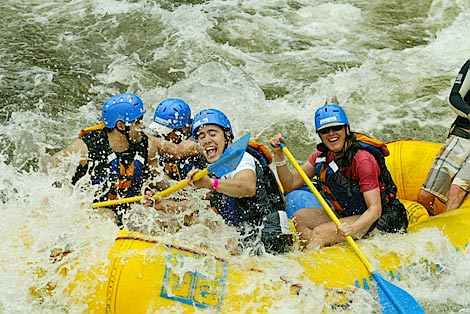 Our raft negotiating a rapid on the Rio Antigua in Veracruz state, Mexico.

This part of Veracruz state has two things which are crucial to a good white water river: mountains and rainfall. In fact the highest mountain in Mexico, 18,490 foot (5,636 meter) Orizaba volcano, can be seen from Jalcomulco on a clear day. And the area averages almost four feet of rain each year.

Folks started running the rivers here decades ago and today there are around 40 different rafting companies to choose from. We chose Mexico Verde, which has been running the rivers around since the mid ’90s. They also run a very unique “base camp”. 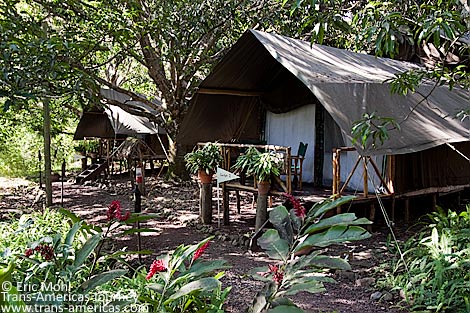 Army surplus tents have been transformed into a 3-star suites with a private bathrooms at Mexico Verde’s base camp.

Mexico Verde’s overnight guests are accommodated in army surplus tents which have been transformed into four bed rooms with shared spotless and roomy bathrooms or suites with their own bathroom. There are beautiful rugs on the hardwood floors, nice sheets, and private decks. There’s even Wi-Fi. 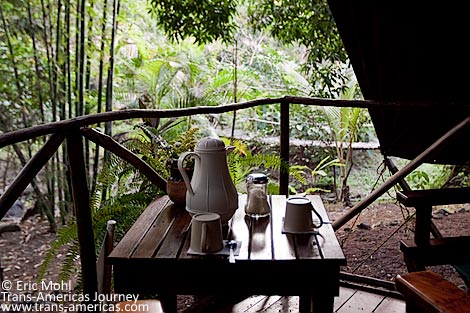 At Mexico Verde your 3-star tent suite comes with morning coffee service on your front porch.

The army tents aren’t the only things that are being recycled at Mexico Verde. The company reclaims and reuses all water via a cutting edge on-site system. All garbage is sorted and either composted or recycled. And there’s even a nursery where indigenous plants are being grown and replanted. 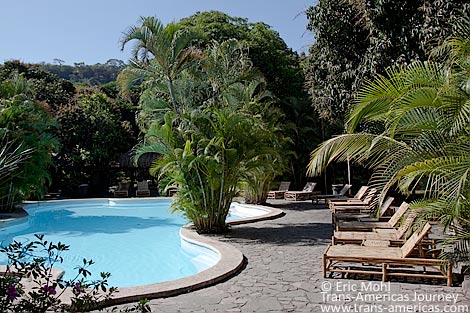 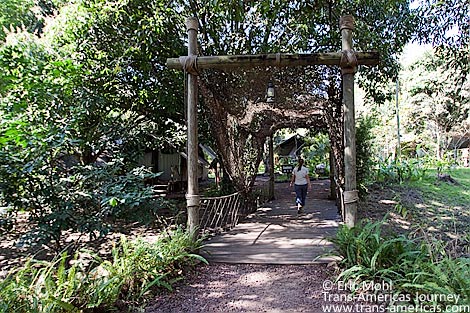 The well-traveled owners of Mexico Verde love the Grand Canyon and this bridge spans a small creek that’s been labeled “Barancas Grande” or Grand Canyon.

Every Mexico Verde rafting trip is accompanied by a safety kayaker whose job it is to scout the rapids and be on standby to pluck any swimmers out of the water as fast as possible if need be. Mexico Verde also has a roster of highly-experienced and highly-trained and certified guides who speak English in addition to Spanish.

Our guide, Coba, is from the local area but spent years guiding in the United States on many rives we’ve only dreamed of rafting. He’s also a biologist and helped us identify a lot of birds during our trip. Of the 40 or so river rafting operations in and around Jalcomulco, Mexico Verde is one of the few that employs predominantly local river guides like Coba. 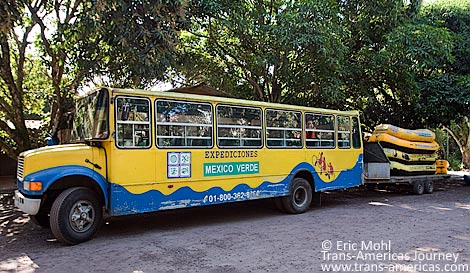 Off for a day of white water fun.

Watch us and Coba (okay, mostly Coba) in action on the Rio Antigua in our video, below.

We were rafting in the low-water season when the 10 mile (16 km) trip down the Rio  Antigua, which plummets roughly 3,000 feet (1,000 metes) in just 70 miles (112 km), is at its most placid. In the high season (July/August) this same trip, which took us about two hours and rarely approached class III rapids, whizzes by in less than an hour hurtling through a never-ending series of class IV and V churns. 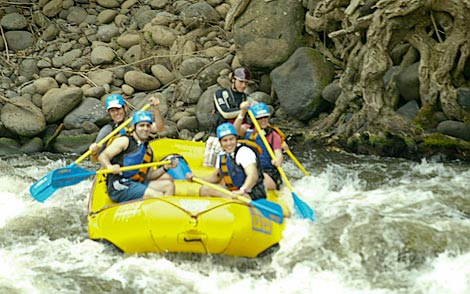 Our raft and our raft-mates negotiating a rapid on the Rio Antigua with the help of our guide, Coba, in the back of the raft. 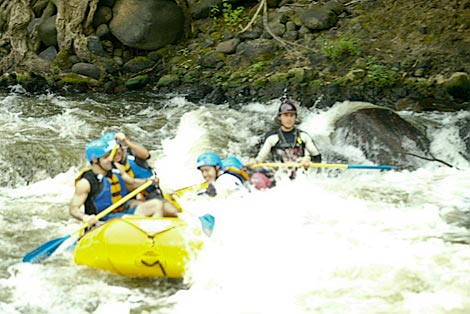 Just look at how spastic we all look coming out of this rapid, like a bunch of clowns in a bathtub. Now look at how calm our guide Coba is there in the back of the raft. It looks like he’s meditating as we flail about in the water.