The Name Says It All – Rainforest Adventures, Costa Rica 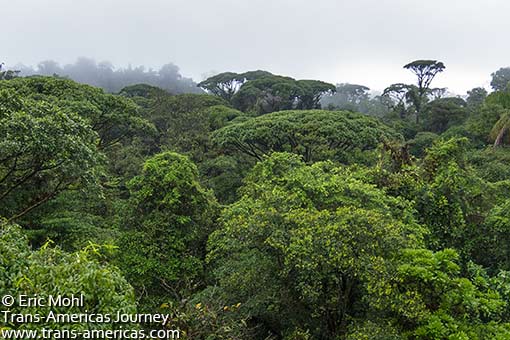 A tiny portion of the rain forest that’s protected as part of the Rainforest Adventures operation in Costa Rica.

Rainforest Adventures was started by biologist Joaquín von der Goltz in 1994, and now has two operations in Costa Rica. One is on the Pacific side near the beach town of Jaco and the other is on the Atlantic side surrounded by the Braulio Carillo National Park less than an hour from San José.

Between the two properties, Rainforest Adventures currently protects 1,394 acres (565 hectares) of land and the wildlife that lives on it, including endangered scarlet macaws on the Pacific side.

You can visit Rainforest Adventures just for the day but the Atlantic operation also has bungalows for overnight guests. We arrived at Rainforest Adventures Atlantic in the early evening and settled into our comfortable room (private bath, hot water, patio) before heading out on a night hike with our guide, Marvin (ask for him, he was excellent).

We barely made a dent in one short trail but we managed to see so many rainforest creatures during our night walk at Rainforest Adventures, including a small possum, three kinds of frogs, one very weird millipede, more types of crickets and grasshoppers than we could keep track of (it’s hard to take notes in the dark), and the star of the show: a blue lasso spider. 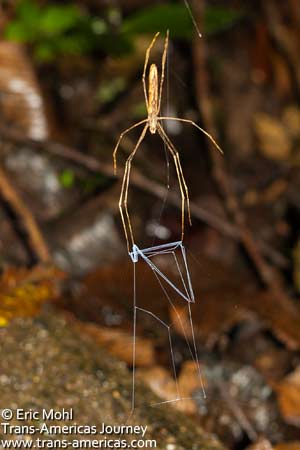 We saw this blue lasso spider during a night walk on a trail at Rainforest Adventures Atlantic in Costa Rica. It hunts using that loop of blue webbing, hence the name.

This leggy wonder doesn’t spin a traditional web. It spins a lasso instead and the business end of it is actually blue. Amazing, even for an arachnophobe like Karen. 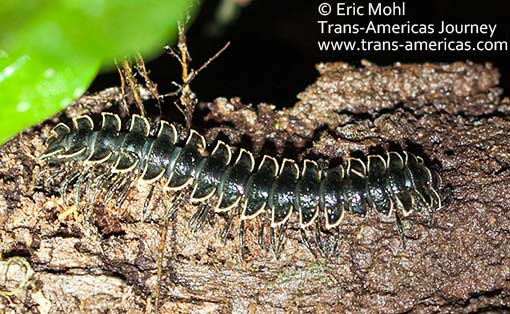 This millipede was scooting along a log near the trail we took during our night walk at Rainforest Adventures Atlantic in Costa Rica. 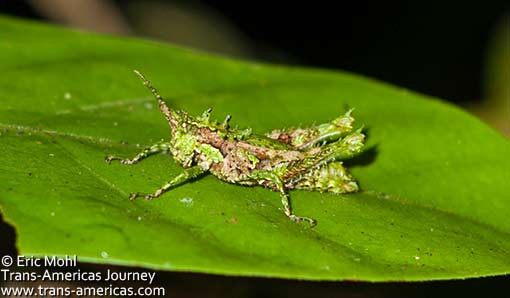 Our guide, Marvin, pointed out this camouflaged grasshopper, which really did look like it was covered in moss, during our night hike at Rainforest Adventures Atlantic. 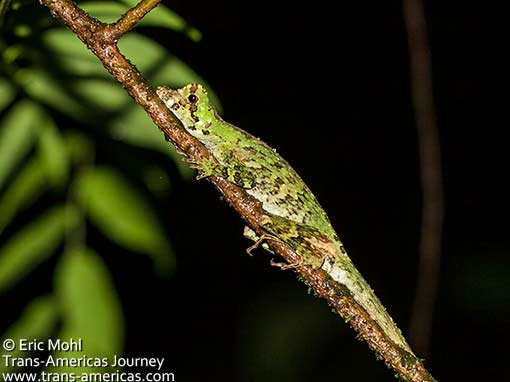 Night hikes through the rainforest get you face to face with critters that just aren’t around during the daytime, like this lizard. If you know what kind it is let us know.

Rainforest Adventures pioneered a contraption called the aerial tram and variations on the theme–think of it as a tropical gondola–can now be found around the world. The slow-moving tram takes about an hour to travel 1.5 miles (2.6 kilometers) round trip at varying heights above the jungle floor. 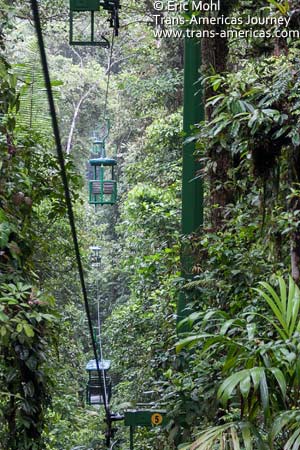 It’s a relaxing ride through secondary (which means it’s been cut but is now rebounding nicely) and primary rainforest (which means it’s never been cut), but try not to nap. You don’t want to miss the adorable baby sloths, coasting toucans, and ingeniously camouflaged common pootoo birds, all of which we saw from the tram. 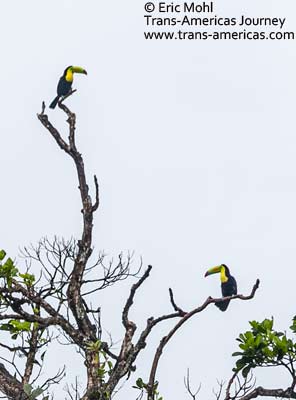 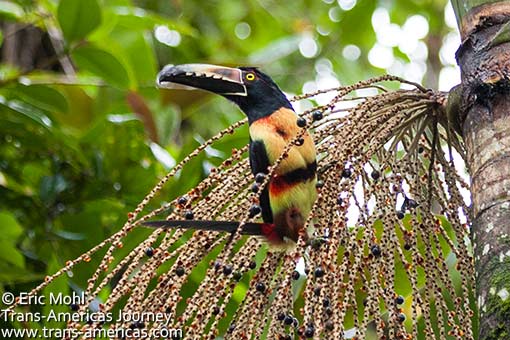 This collared aracari was snacking on palm fruits near the cafeteria at Rainforest Adventures Atlantic.

Ziplines are for woosies

Anyone can zipline (well, almost anyone) and, to prove it, we did the 10 cable/14 platform zipline on the Rainforest Adventures Atlantic property. Then our guide suggested we cap it off with a doozie. It’s called the AdrenaLine and it spans 2,300 feet (700 meters). That’s nearly half a mile. At its highest, you’re 200 feet (60 meters) off the ground. You can travel up to 35 miles (55 kilometers) per hour. Eric had a blast. ‘Nuff said.

Ride along during our rainy zip line and AdrenaLine rides at Rainforest Adventures Atlantic in our video, below.

And, yes, even with all that excitement it’s still possible to look around and enjoy your unique POV near the treetops in the jungle. We even caught a fleeting glimpse of a lesser anteater (aka the Southern tamandua) on the ground below one of the platforms–our first-ever spotting of this species. Its black and tan coloring and its size made us think it was a German shepherd until we got a closer look.

At Rainforest Adventures you don’t even have to get on a tram, zip line, or dark trail to see wild creatures. We saw red-eyed tree frogs and sloths near the main entrance, bullet ants near the gift shop, and we even spotted a rare umbrella bird right from the cafeteria. 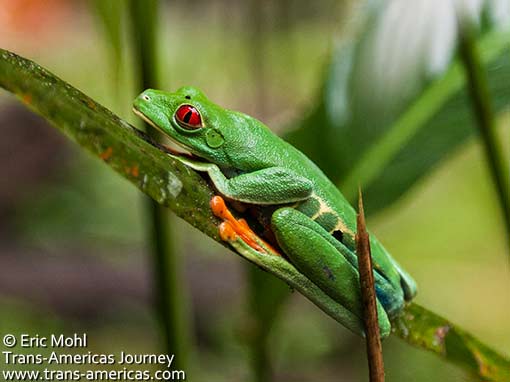 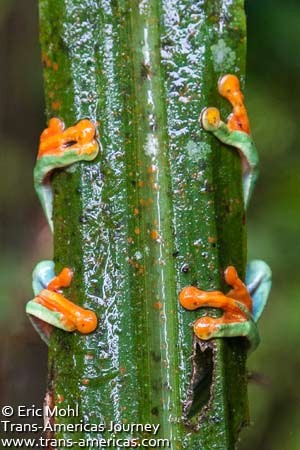 The amazing toes of a red-eyed tree frog. 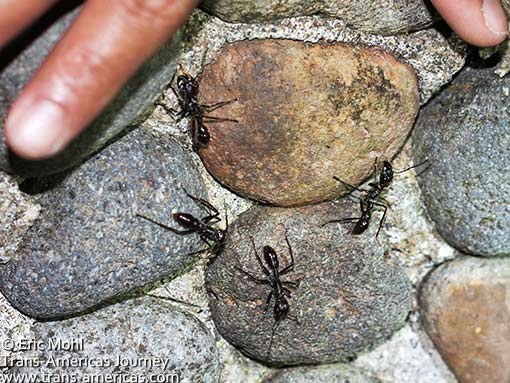 Bullet ants are big and their bite is said to be one of the most painful in the insect kingdom. 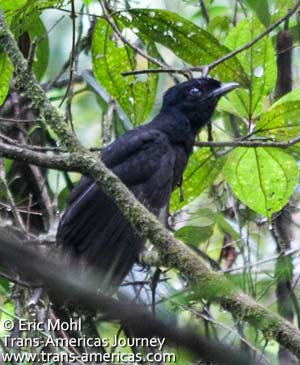 A female umbrella bird–a species that’s on most birders’ bucket lists–hanging out near the cafeteria. 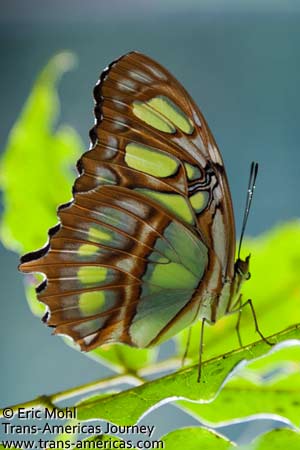 A butterfly fresh out of its cocoon in the butterfly enclosure at Rainforest Adventures Atlantic. 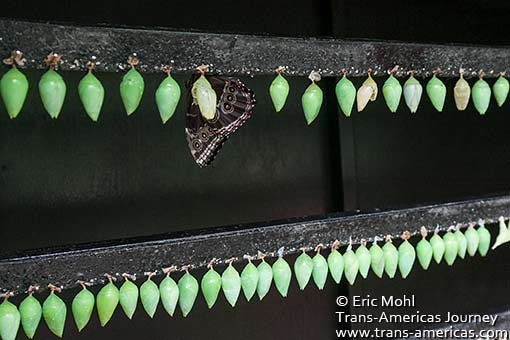 In 2012 Rainforest Adventures bought a jungle adventure park near Tulum, Mexico called Hidden Worlds along with its one-of-a-kind roller coaster zip line. We were actually part of the team that test-rode this unique thrill ride, an adventure we won’t forget any time soon.