It’s tempting to lump all Mayan archaeological sites together as the same sort of amazing piles of rocks. That would be a mistake. If you read up a bit and look closely even untrained eyes (like ours) can begin to see distinct differences from region to region and era to era. The Becan, Hormiguero, Chicanná, and Xpujil sites, for example, represent a distinct Río Bec style. 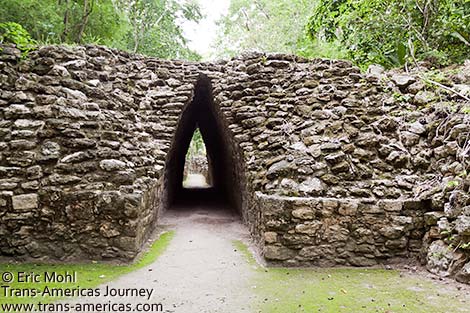 This vaulted tunnel is the dramatic entrance you walk through to get to most of the excavated areas of the Becan archaeological site in Mexico and is a distinct feature of Río Bec architecture.

What is Río Bec style?

The Río Bec style of Mayan architecture, found in the southeast corner of Campeche State in the southern reaches of the Yucatan Peninsula just shy of the Guatemala border, developed from the 7th to the 12th centuries AD and is marked by buildings which feature two usually decorative (non-functional) stone towers–so-called Río Bec Towers. Rounded corners are another distinguishing feature of Río Bec architecture. Some of the features of Chenes style Mayan architecture also carry over, including the ferocious Monster Mouth doorways.

Whether you fully appreciate the subtle differences or not, the following Río Bec style sites all offered more than just another pile of rocks. 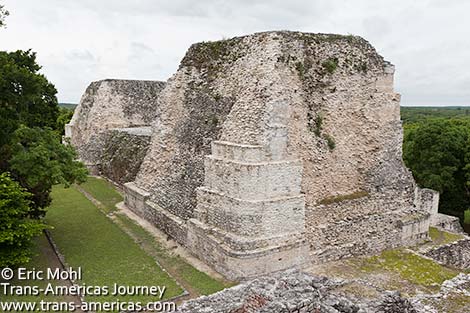 The massive Structure I at Becan archaeological site in Campeche, Mexico.

This city of Becan was occupied for hundreds of years starting in the pre-Classic period (550 BC) and continuing right through to the late pre-Classic period by which time the city had become a major force. At some point, the Mayans dug a moat around the whole city and this is what inspired archaeologists to dub the city Becan, which is the Mayan word for “ravine or canyon formed by water.” 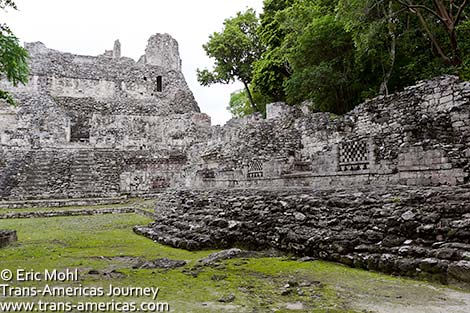 We loved the latticework that remains here on the flanks of Structure IV at the Becan archaeological site in Mexico.

The drama of the Becan site begins right off the bat as you walk through a vaulted tunnel in order to reach most of the excavated areas of the city. From there we followed a circuit through the site’s highlights including four big temples, all open for climbing. 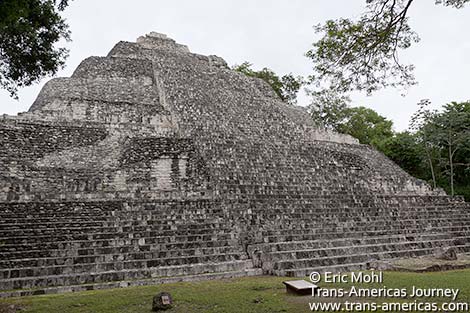 Structure IX is one of four temples at the Becan archaeological site that you can climb up.

The temples at Becan are so steep that ropes have been put up to help you pull your way up and give you more balance on the way down. Weirdly, the rope strung up the stairway on one of the temples had been secured at the top by tying it around an ancient stone stele (tablet) still in place atop the temple. 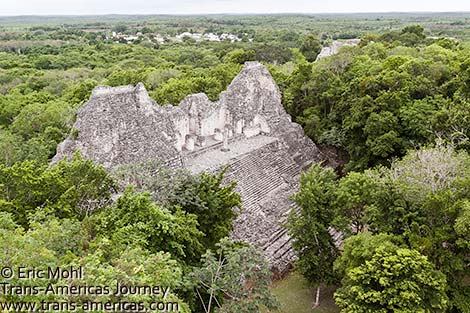 This already rich site had one more surprise for us. Protected in a specially-built stone room and displayed behind glass is an incredible stone mask of the Mayan Sun God Kinichna. The piece, depicting a human head emerging from the wide-open jaws of a jaguar is stunning even behind the deplorably filthy glass. BYO Windex. 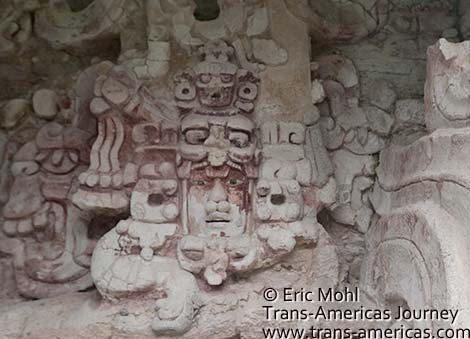 Unfortunately, this marvelously preserved stone mask of the Mayan Sun God Kinichna is protected behind glass that was so dirty we could barely appreciate this relic. 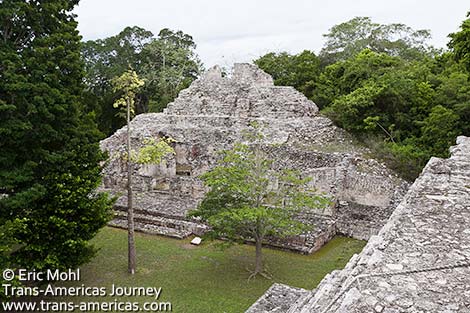 A big part of the fun of the Becan archaeological site is climbing to the top of temples and looking across the city spread out below you.

This free site, known as Hormiguero (which the Spanish word for anthill), lies at the end of a dirt road that was in very good condition when we were there, by the way, so don’t let that stop you. This peaceful site has much to look at and remains one of our favorite Mayan sites. 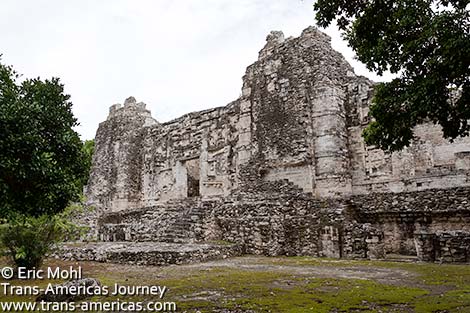 Structure II is the most architecturally important temple at the Hormiguero archaeological site, in part because of its rounded sections which are a hallmark of Río Bec style Mayan architecture. 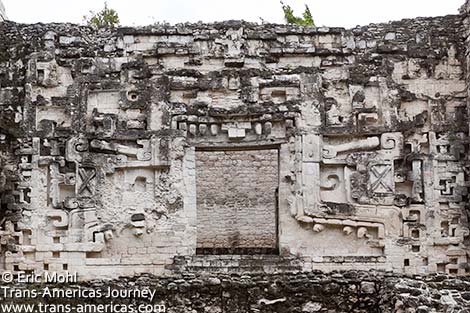 The Monster Mouth doorway on Structure V at Hormiguero is impressive, but not nearly as well-preserved (or chilling) as the one at Chicanná (the next site covered in this post).

The lush jungle setting and only partially-excavated ruins give Hormiguero the right amount of mystery.

Ah, Chicanná. This site, believed to have been inhabited from 300 to 1,00 AD, was only discovered by archaeologists in 1966.  Here we discovered the most amazing example of the Mayan “Monster Mouth” doorway–one so well-preserved that the gaping maw, glaring eyes, and huge fangs that make up the building’s dramatic doorway can still produce shivers. Yes, it’s been about 20% rebuilt, but the effect is authentic. 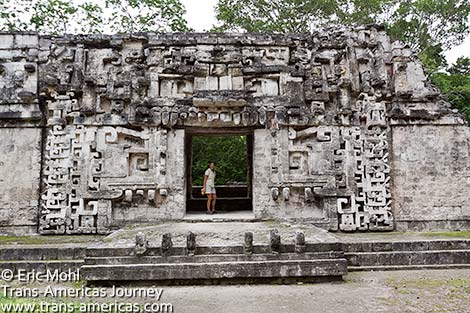 The doorway is so impressive that it inspired the site’s name: Chicanná means “house of the serpent mouth” in Mayan. As an added bonus, we saw three keel-billed toucans while we were at Chicanná. 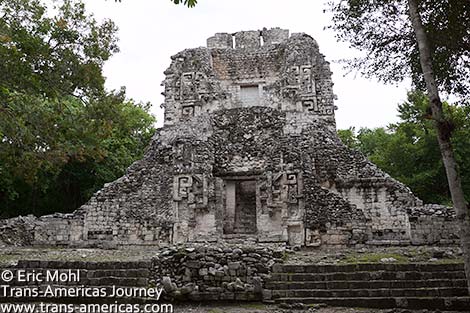 Another part of what remains at Chicanná archaeological site.

It didn’t help that we passed through the grotty little town of Xpujil and got charged exorbitant gringo prices for a VERY mediocre meal before heading to the Mayan ruins of the same name. But even disregarding our bad start with the place, if you’re pressed for time or money the Xpujil ruins can be skipped.

Structure I at Xpujil archaeological site has three towers, not the normal two found in other Río Bec style Mayan cities.