Is This the Most Amazing Amazon? – Tambopata National Reserve, Peru

We’ve explored many parts of the Amazon including along the Napo River and Yasuni National Park in Ecuador, in Western Brazil near Manaus, in the Tena area of Ecuador, in northern Peru around Iquitos, and in the Cuyabeno area of Ecuador. However, the Amazon in the Tambopata National Reserve in southern Peru blew us away (it helped that we saw a young puma during a night walk in the jungle). So, is this the most amazing Amazon? 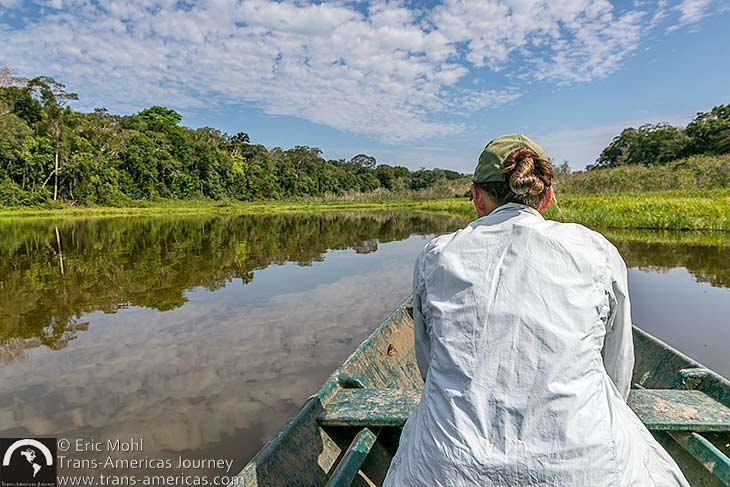 Karen exploring more of the Amazon in and around the Tambopata National Reserve in Peru.

Into the Amazon in the Tambopata National Reserve in Peru

The Tambopata National Reserve protects a wide range of habitats which are home to an enormous number of species including a thousand types of butterflies, 600 species of birds and mammals galore. And because the reserve, which covers more than 1,000 square miles (2,600 square km), is at the foot of the Andes range it has rich soil as well so plants and trees thrive. 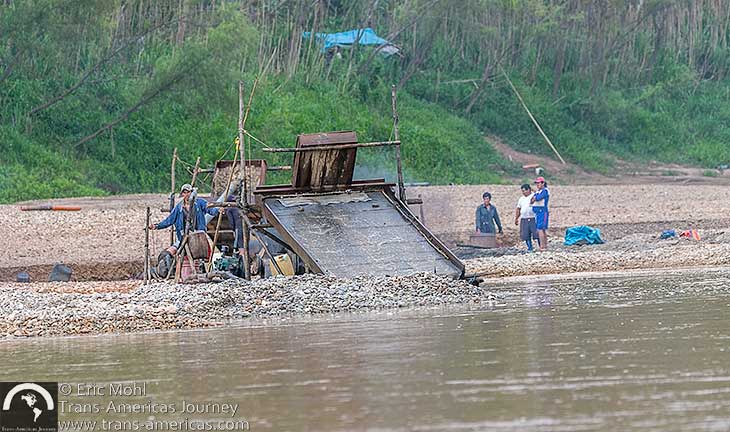 Just one of the illegal gold panning operations we saw.

Despite its status as a national reserve, there are environmental threats in the area. Chief among them are illegal small-scale gold extraction operations. We saw many of them on the rivers in the reserve where miners cut down trees and kill animals. They also contaminate the water with mercury from the panning process. The water already has such high levels of mercury that some people we met only eat fish from fish farms, never from the rivers. 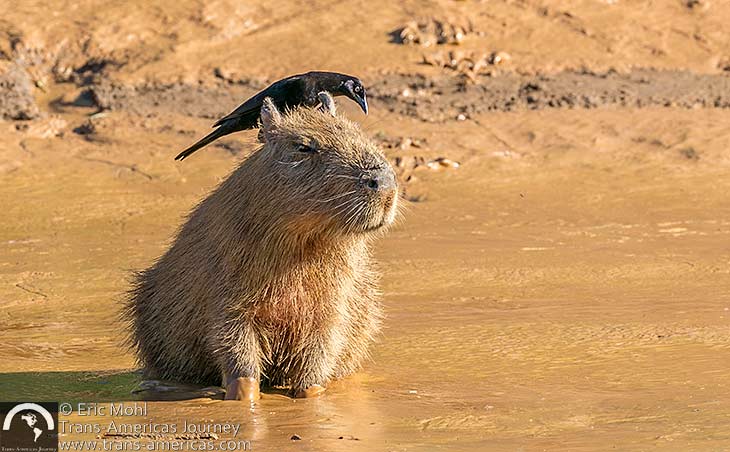 A capybara and friend on the banks of the Tambopata River.

There are more than 20 lodges in the Tambopata area. We spent our time at lodges operated by Rainforest Expeditions, in part because we’re into the company’s legacy of research and conservation. They operate three individual lodges, plus a private Amazon Villa luxury bungalow, in various areas in and around the reserve and they all do an artful job of combining a jungle experience with many more comforts than you’d expect. 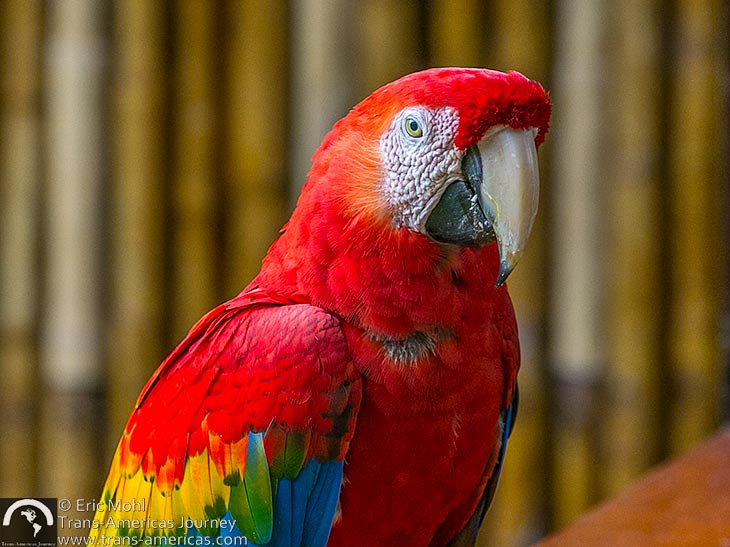 A scarlet macaw at the Tambopata Research Center (TRC) which was opened as the base for the Tambopata Macaw Project which continues its conservation efforts funded, in part, by tourism to the TRC lodge.

Macaw populations are slowly growing thanks to ongoing conservation efforts and we saw dozens of them while we were at the Tambopata Research Center lodge, operated by Rainforest Expeditions.

The original lodge is the Tambopata Research Center (TRC) which is the base for the Tambopata Macaw Project which was set up in 1989 to study and conserve macaw populations in association with Texas A&M University. Researchers estimate that there were only about 500 macaws in the area when their research, nest building, and conservation efforts started. Tourism was developed to fund the science and today, more than 20 years since conservation began, there are more than 5,000 macaws in the area along with about 2,000 travelers who visit the TRC lodge each year. 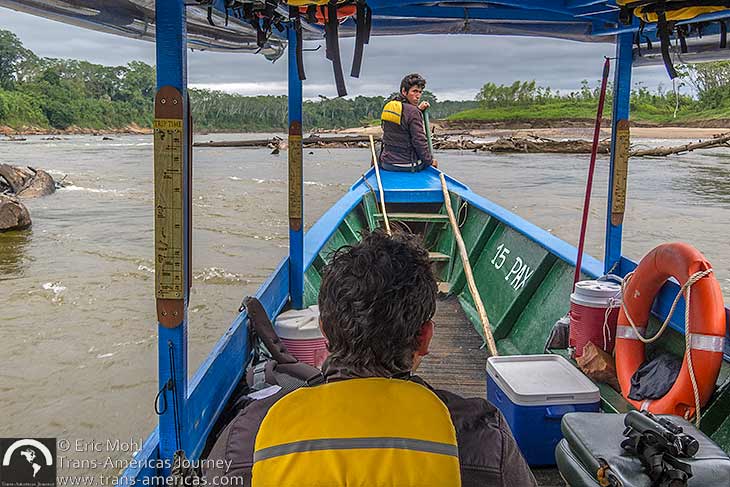 Traveling on the Tambopata River.

The payoff for the long journey is the fact that the TRC lodge is actually inside the reserve. This helps explain why 156 visitors saw a jaguar near TRC in 2016. The lodge is simple but comfortable with open-sided sitting areas and dining room and a range of rooms from with private bathrooms, hot water, electricity during certain hours of the day, and Wi-Fi. New Suites and Deluxe Suites are larger and have ceiling fans. The Deluxe Suites also have a furnished outdoor patio with an outdoor tub so you can soak in the jungle. It’s almost too much luxury. Almost. 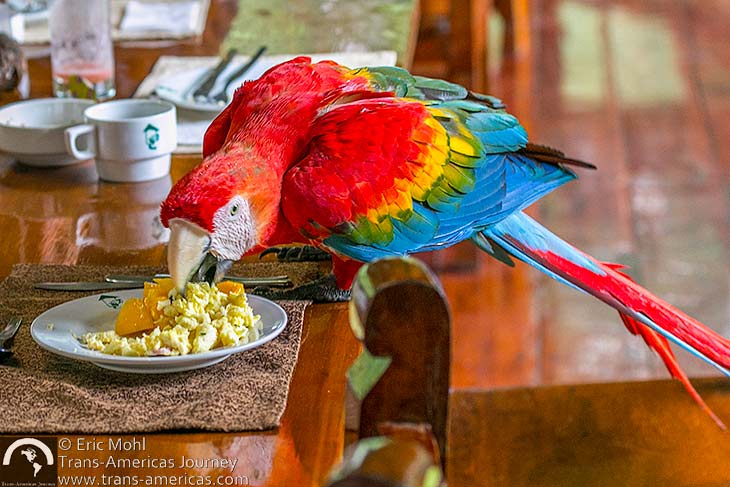 A wild (but habituated) scarlet macaw helps itself to an unguarded breakfast at the TRC lodge.

And, of course, there are the macaws which seemed to be everywhere, including inside our room which, like most of the rooms at Rainforest Expeditions lodges, had only three walls. The idea is that people come to the Amazon to be in the jungle, not in their rooms so every effort is made to bring the outside in. But don’t worry. As we’ve seen before, in a balanced natural environment insects are usually not an overwhelming problem and good nets over the beds ensure peaceful sleep. FYI: peak season for the macaws is January and February when they’re nesting. 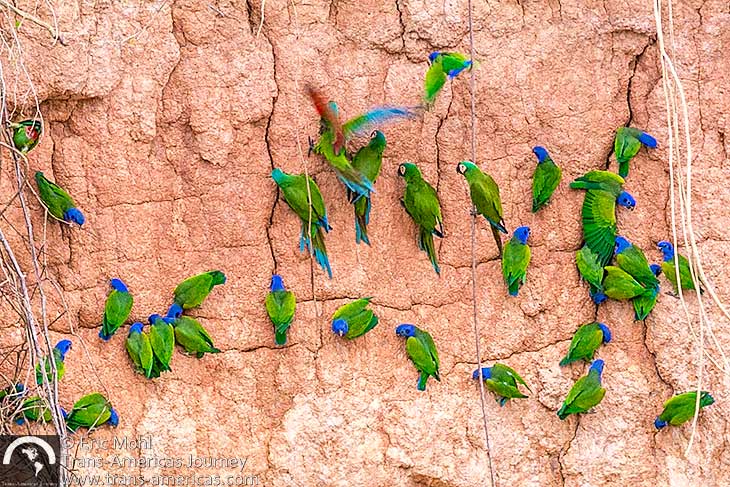 On the way out to the TRC lodge our boat stopped at the famous riverside Chuncho clay lick which routinely attracts hundreds of macaws, parrots, and parakeets. The birds (and some mammals too) come because their natural diet contains natural toxins which are neutralized by components in the clay found here.

Unfortunately, it started to rain as we arrived at the clay lick and though we were all willing to get drenched, the birds were not and the clay lick was nearly empty with just a handful of blue-headed parrots and five chestnut-fronted macaws. FYI: the driest season in the region is June to October, but we were there in September and it was far from dry. 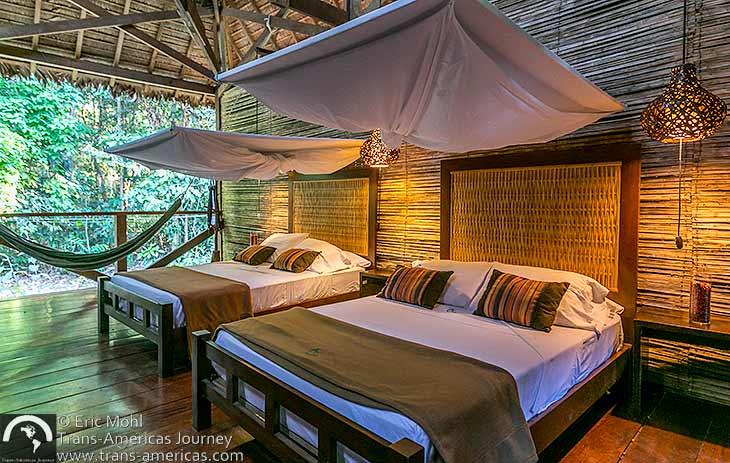 With tourism demand increasing, Rainforest Expeditions began looking for closer (but still wild) areas in which to build new lodges and the company eventually worked with a local community to create Posada Amazonas, their second lodge. Finally, Refugio Amazonas was built. 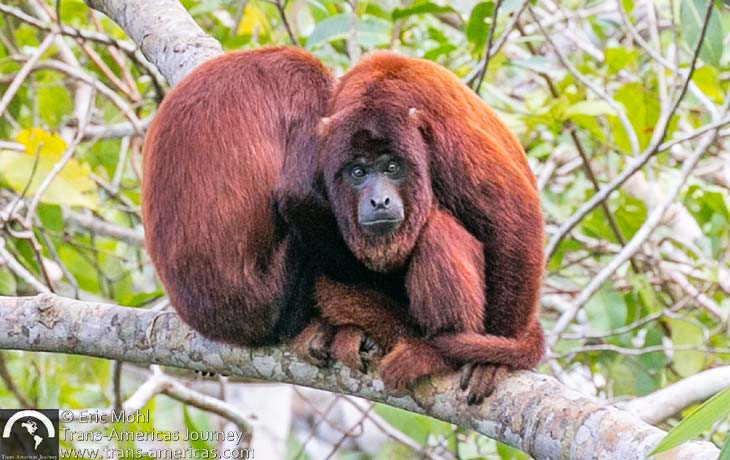 Red howler monkeys in the Tambopata National Reserve in Peru. 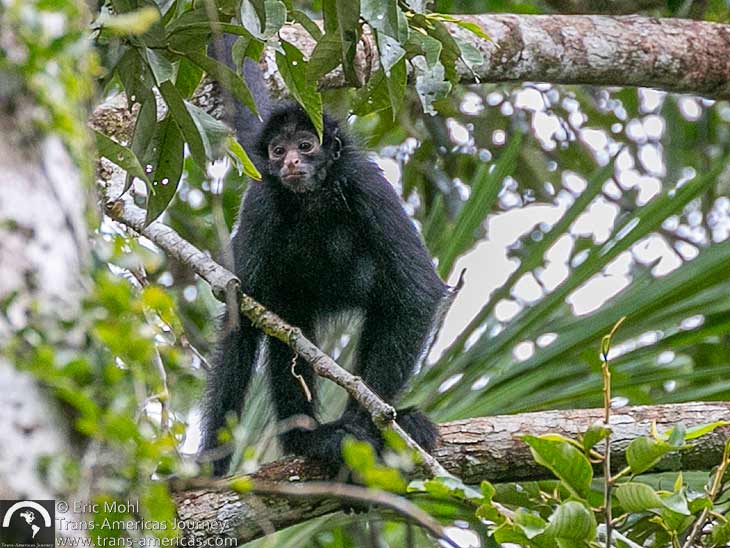 A black-faced spider monkey in the Tambopata National Reserve in Peru. 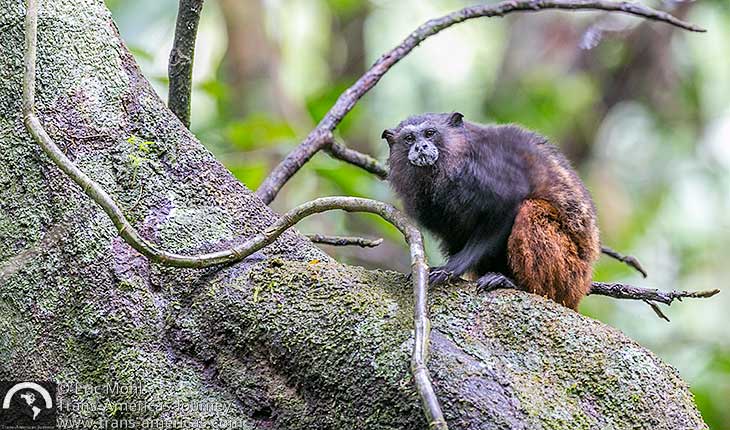 A saddleback tamarin outside our room at Posada Amazonas near the Tambopata National Reserve in Peru.

Located just 3.5 hours by boat (each way) from Puerto Maldonado, Posada Amazonas is much closer but still surrounded by nature on a 495 acre (200 hectare) private reserve adjacent to the Tambopata National Reserve.

This lodge is even more comfortable than the TRC lodge. Rooms, which are also missing one wall, per Rainforest Expeditions’ immersive Amazon approach, have private bathrooms with hot water and there’s electricity until 10 pm. There’s also a spa, Peruvian craft beer, citronella bug spray in the bathroom (never needed it), raised walkways, and plenty of rubber boots (pack knee socks to avoid chafing) and walking sticks. 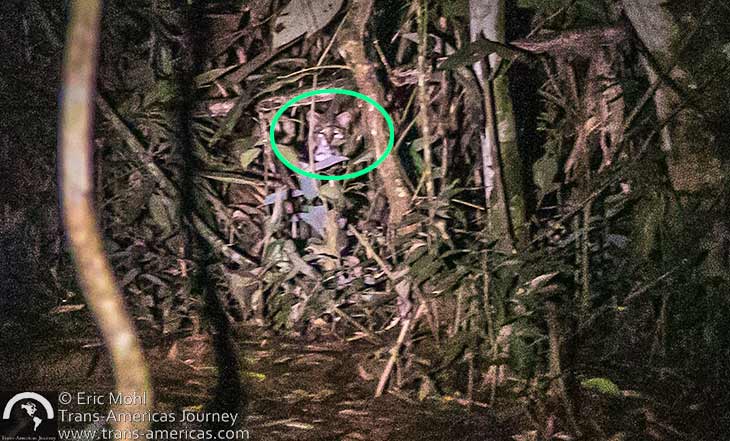 That’s a young puma peering out at us during a night walk in the jungle around the Posada Amazonas lodge.

We spent a lot of time jungle with our guide Paul, who was born in a remote village called Manu where he literally had a jaguar as a pet. Paul took us to the nearby canopy tower for very fruitful early morning bird watching, we went paddling on oxbow lakes, and, of course, we did a lot of jungle walking. The highlight was a night walk during which Paul’s expert hunch (and trail observations) paid off with a sighting of a young puma, a first for us and rare enough for Paul to get excited too. 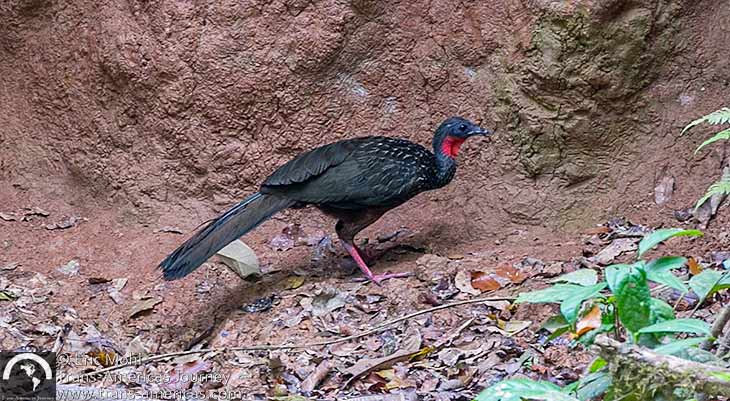 We spent hours staring at a tree with a known harpy eagle nest in it but we never saw the harpy and had to settle for this common spics guan instead.

Despite our best efforts we never got a glimpse of the nesting harpy eagle near the lodge (other guests saw it), so we have to content ourselves with Rainforest Expeditions’ Harpy Cam, below. 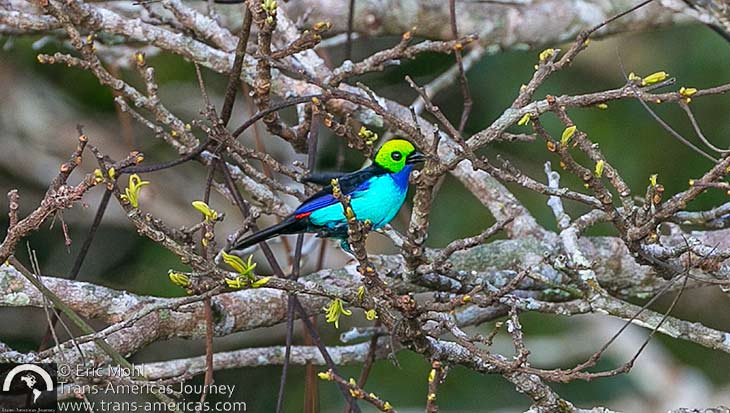 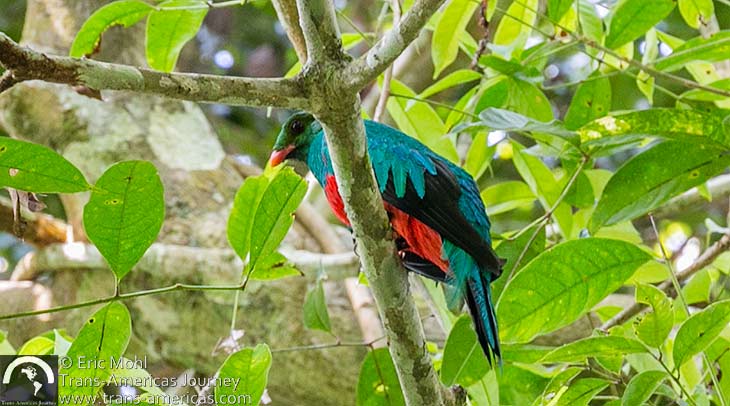 We’ve seen resplendent quetzals before but we saw our first pavone quetzal while hiking in the jungle near Posada Amazonas.

We’d already seen cocoi herons, king vultures, and dozens of capybara during our journeys up and down the river, but on our trip back to Puerto Maldonado we got a real treat: a pair of tapir on the banks of the river. 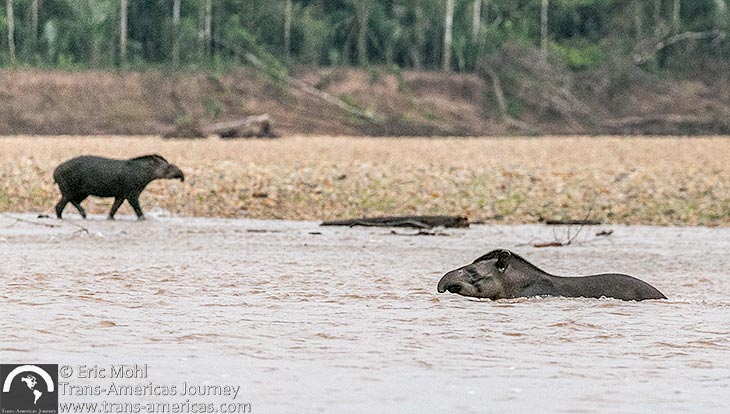 It’s unusual to see tapir out in the open as we did during a journey on the Tambopata River.

Also worth noting: while we were in the Tambopata Amazon a cold front blew in from Patagonia and temperatures plunged, so pack some layers just in case. For more surprises, check out our post about other Amazon Travel Myths. 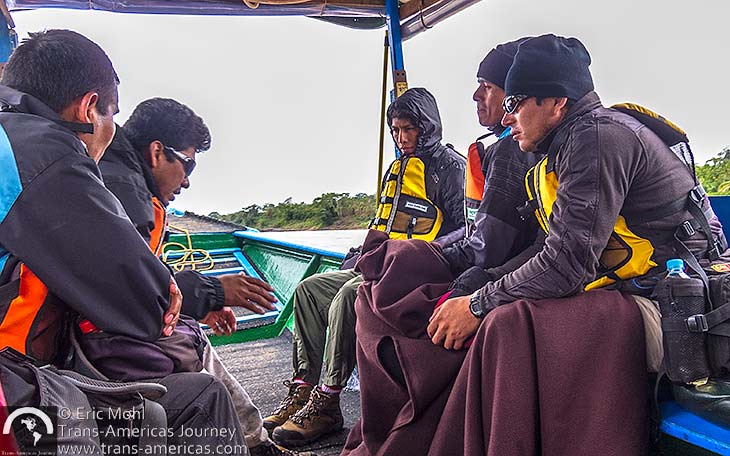 If anyone tells you it’s always hot in the Amazon, show them this picture of guides all bundled up during a very, very cold journey on the river.

Innovating in the Amazon

Another reason we like Rainforest Expeditions is that they continue to innovate. In 2017 that meant the addition of a number of Wired Amazon programs. One allows guests at Refugio Amazonas to help Discover a Species during nighttime bug collection efforts. The area may be home to thousands of uncatalogued species and this program aims to find them. Specimens are gathered and then sent to a leading entomologist in Lima where they’re examined. At least one new species of moth has been found with the help of guests. 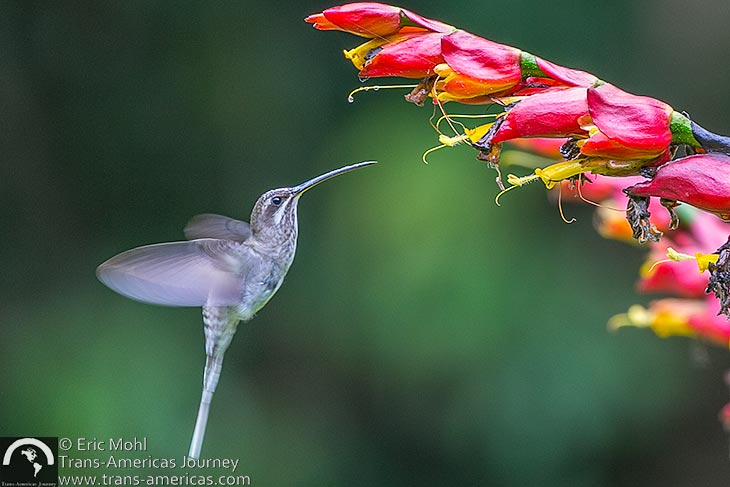 A hummingbird gets breakfast.

Other new programs include creating an enormous grid of wildlife camera traps called Amazoncam which can be watched around the world and an Aerobotany program that lets anyone with an internet connection help take a census of local trees. 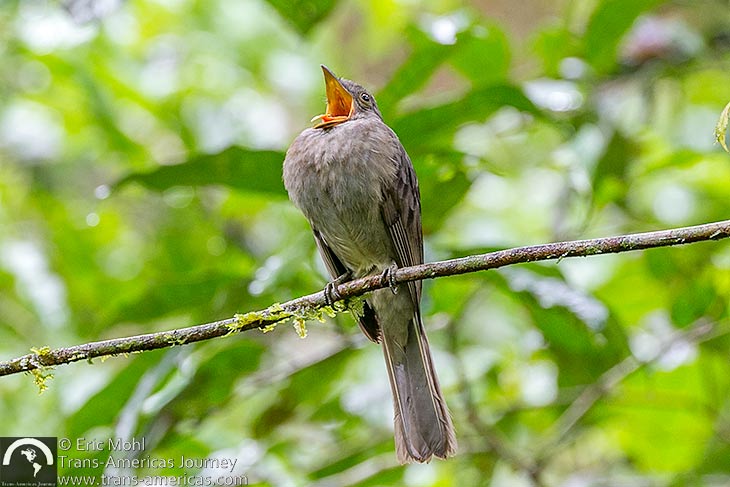 This is an aptly-named screaming piha caught in mid-scream.

You may need to spend a night in Puerto Maldonado before or after your Amazon adventure. Here are some travel tips.

Puerto Maldonado is an Amazon gateway town, a port town, and a border town (Brazil is right over there). That triple whammy would normally result in a dirty, dreary, downtrodden town. But Puerto Maldonado is practically pleasant. Traffic roundabouts are decorated with huge statues of harpy eagles and big cats. The people are reasonably friendly. And there’s no whiff of sketchiness or neglect.

We stayed at Anaconda Lodge which is right next door to the Rainforest Expeditions office. The place is run by an expat named Donald and his Thai wife Wadee (along with a menagerie of dogs, cats, and the occasional rescued monkey). A range of rooms are scattered around a jungly plot of land. There’s a very clean pool, Wi-Fi (which is weak or strong depending on which room you choose), and a menu of legit Thai dishes cooked by Wadee and her daughter.

Though there are only 15 rooms, one of them is called Room 69, aka the honeymoon suite, for reasons that will shortly become apparent. This racy room features a wooden bed with four enormous penises carved into the bed posts, bedside tables with boobs that serve as drawer handles, and a table supported by the bent over legs and backsides of two women instead of traditional legs. The furniture was carved by a local artist based on designs by Donald and Wadee, who swear the artist wasn’t too shocked.