The Pisac (sometimes spelled Pisaq) archaeological site, at the eastern end of the Sacred Valley, was built by the Incas who used it in many different ways. It’s a complex site that could easily take a day to explore. Don’t miss our drone travel video over this picturesque site. 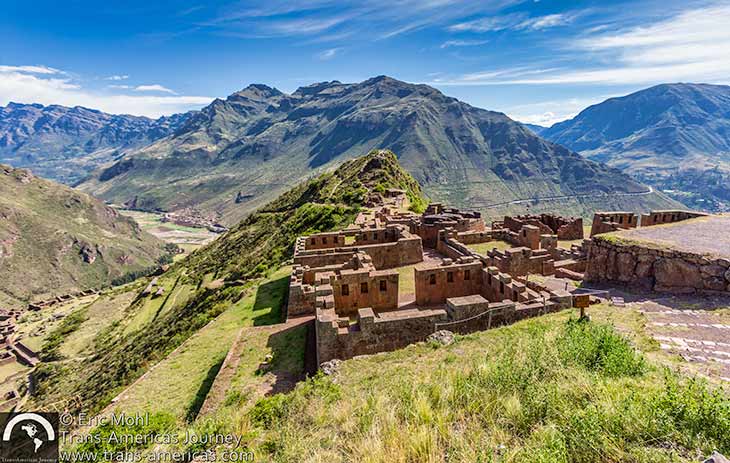 Part of the Pisac archaeological site that spreads out along steep hillsides and ridge tops high above the town of Pisac in the Sacred Valley of Peru.

The Inca loved this valley which was cut by the Urubamba River and offered fertile soil that allowed the rising empire to feed its people. This reverence led to the name Sacred Valley of the Incas (Valle Sagrada de los Incas in Spanish). 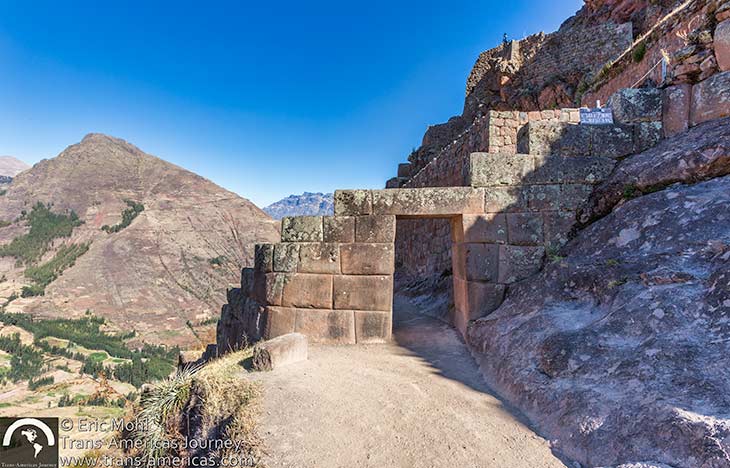 Elegant Incan stonework in a gate at the Pisac archaeological site. 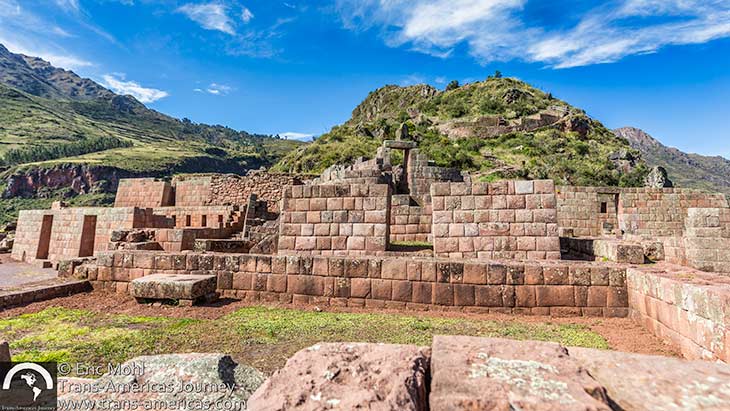 The Inca Pisac archaeological site, which everyone just calls Pisac, occupies a spot high above the town of Pisac. The site spreads out in distinct sections along a ridge atop steep hillsides. Experts are not sure exactly when the site was built, but they do know that it was abandoned in the 1530s after Spanish conquistadors vanquished the Incan empire. 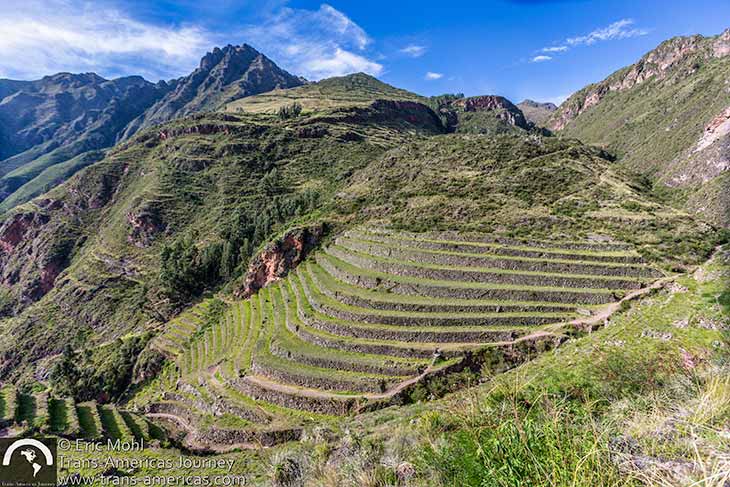 The Incas turned arid, steep hillsides into an agricultural success story by terracing the land and bringing fertile soil to the site from other parts of the valley.

The Inca managed to create fertile terraces on the site’s steep hillsides, but the soil at the site was poor. To get around this, experts believe the Inca imported richer soil from other parts of the valley. Some of the terraces are still in use today. 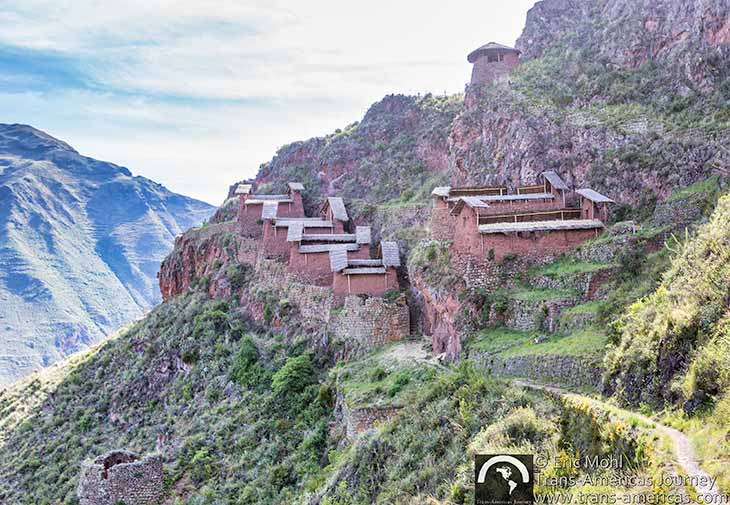 What remains of grain storage structures built by the Inca at the Pisac site.

Farming was so successful at the Pisac site that the Inca built large grain storage structures the remains of which you can see in one part of the site. 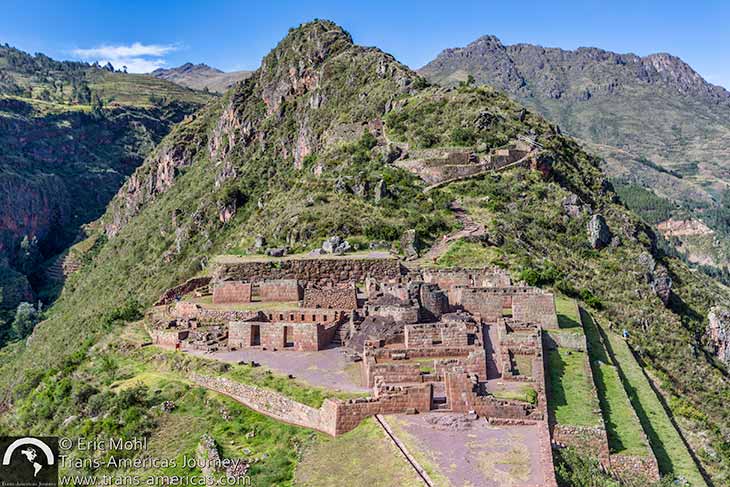 This area of the Pisac archaeological site is home to the Sun Temple.

The location of the Pisac site explains another way the Inca used it. With sweeping views down the valley, Pisac was also a fortress and some experts believe one area of the site may have been used as barracks for Incan warriors. 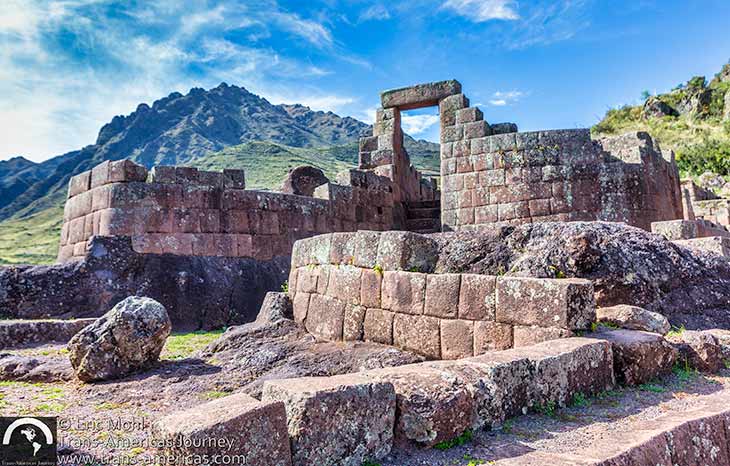 The curved walls and round shape sets the Sun Temple apart from other structures.

The Pisac site was also ceremonial and is home to its own Sun Temple. There are also residential areas with very well-preserved structural foundations. A system of aqueducts and fountains was also created and much of the Incan waterway is still working. 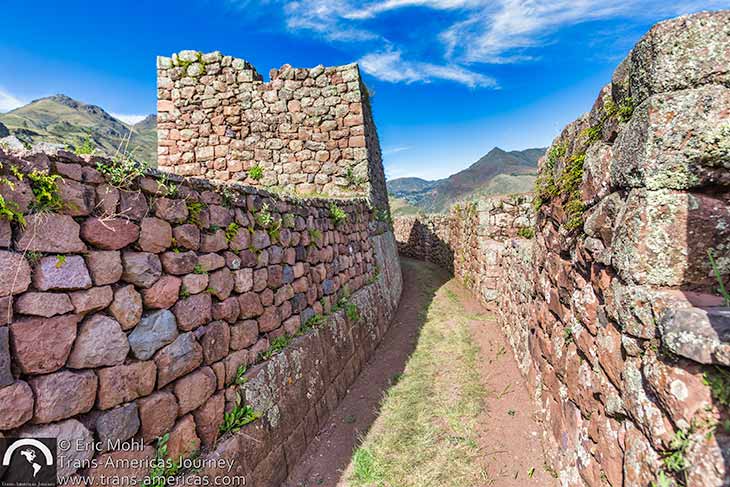 A pathway through Incan walls and the remains of structures at the Pisac archaeological site.

The most unusual aspect of the site may be an area called Tankanamarka. This is a hillside facing the site where niche-like burial chambers were carved into the rock. We’ve visited dozens of Incan archaeological sites and we can’t think of any other that included a cemetery like this. Sadly, the burial sites were looted before they could be properly protected. 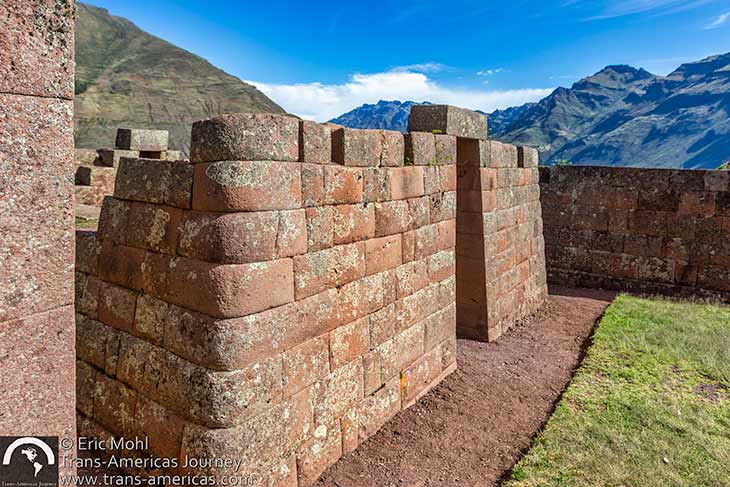 The more important the building, the better the stonework.

These distinct areas of the Pisac site are linked via winding paths and part of the fun of exploring this site is getting a little bit lost in the maze of trails. When we were at the Pisac site, some paths were closed because they’d become unstable which meant we were not able to see all of the areas of the site.

Get an overview of the Pisac archaeological site in our drone travel video, below. 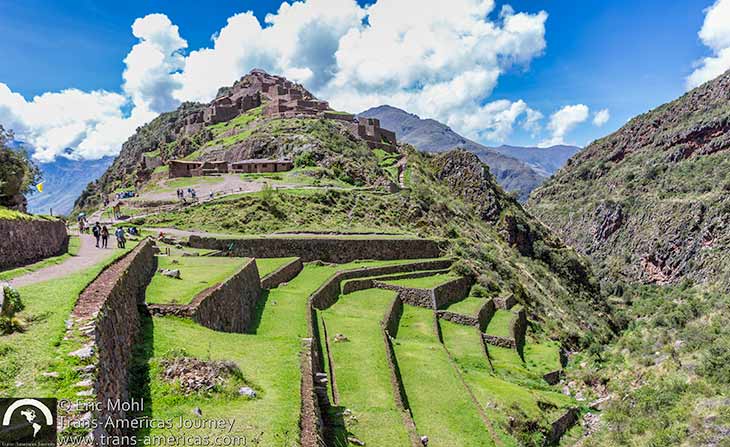 A central and most-visited area of the Pisac site.

Wear good walking shoes and wear a hat and sunscreen and carry water because there is very little shade. And bring binoculars if you want to get a clearer look at the burial niches.

Most tourists start exploring the Pisac site from the main parking area at the top and most explore just the easily accessible areas from there. If that’s all you want to see, allow at least an hour. But there’s much more to this site. If you want to take in other areas (and you should) allow at least two hours. If you plan to hike the trail that connects Pisac town with the site (see below), allow an additional 2 hours each way. If you want to see and do it all at the Pisac site, allow a full day. 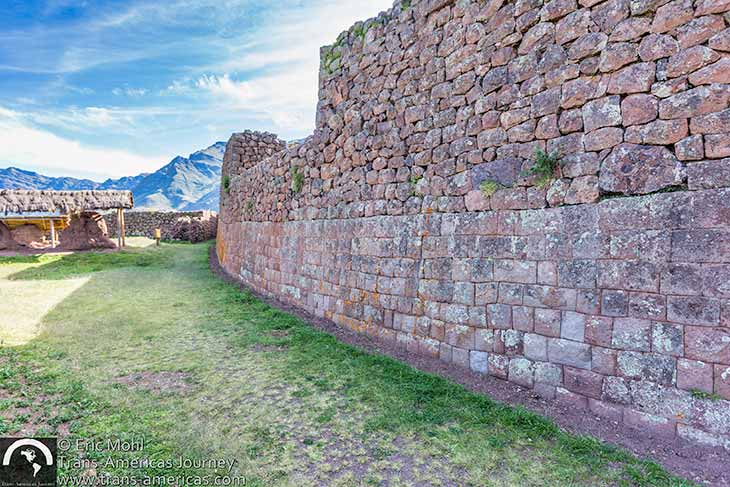 This curved wall at the Pisac archaeological site shows crude stonework atop a more finessed stone base.

Though you can drive or take a bus or taxi all the way up to the entrance to this site, another option is to hike a trail that leads to the site from the valley floor. Look for the trail near the church in the Plaza de Armas in Pisac. The trail is 2.5 miles (4 km) each way and the steepness and the elevation (9,753 feet/2973 meters in town and 10,826 feet/3,3,00 meters at the site itself) need to be factored in too, so allow two hours walking time each way. 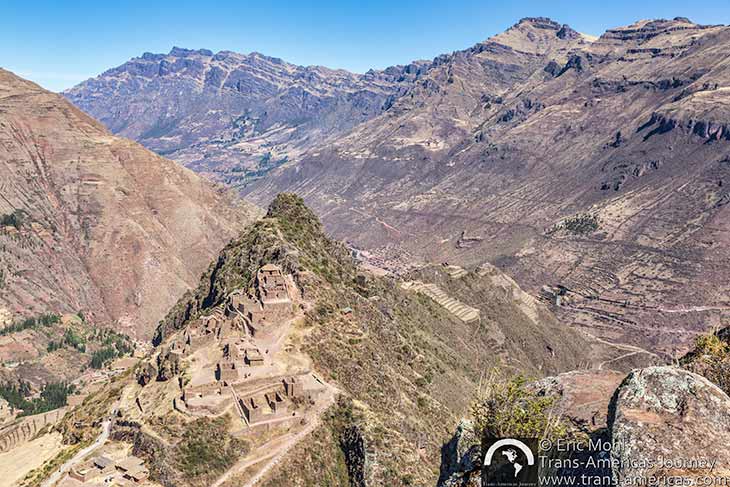 Part of the Pisac archaeological site.

The large daily market in the town of Pisac is as famous as the archaeological site. Truthfully, vendors in this tightly-packed street market sell mostly cheap tourist junk. We walked through the market on two different occasions and we never saw anything for sale that seemed like an authentic, high-quality, traditional item. In Pisac town, be on the lookout for horno colonial (colonial oven) bakeries that turn out beloved traditional baked goods including empanadas. If you need a snack, that’s the ticket.

Where to sleep near Pisac

The town of Pisac is bursting with places to stay, many of them doubling as spiritual centers as well. We stayed at Melissa Wasi B&B on the outskirts of town. The place was named for the daughter of owners Chito and Joyce who bought the land nearly 15 years ago. They built a home near the Vilcanota River and that slowly expanded into a collection of bungalows, a restaurant, and a yoga room. The expansive grounds are peaceful and the full hot breakfast was incredible. Options include private rooms, a spacious bungalow with a kitchenette, cottage-style rooms, and two large duplex bungalows with full kitchens and fireplaces.