Even in culture-rich Guatemala, the high altitude town of Todos Santos stands out for its distinct traditional dress and its serious party town attitude. 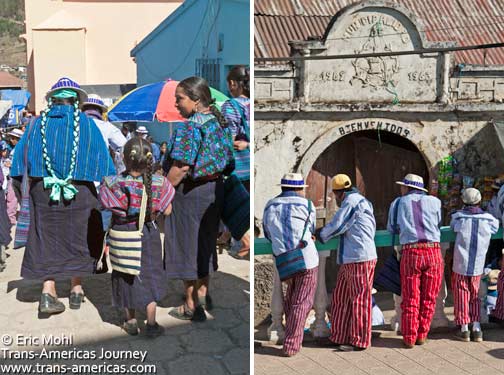 Traditional dress is seen all over Guatemala, but the deep colors, pronounced stripes, jaunty hat,s and elaborate embroidery stand out in Todos Santos.

Getting to Todos Santos

We are happy to report that getting to the mountain town of Todos Santos Cuchumatan (commonly called just Todos Santos) from Huehuetenango no longer involves roads so rough that they re-arrange your organs. The entire route was paved except for a 30 minute section into town and even that stretch of dirt was in good shape. 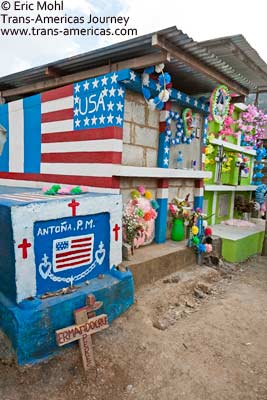 US flags are common on homes and graves near Todos Santos, Guatemala.

Once we reached Todos Santos two things surprised us. First, Todos Santos is much bigger and much more cosmopolitan than we expected.

Which leads us to the second surprise: US flags are everywhere. So many people from Todos Santos have spent time working in the United States and sending money back to their families that town is adorned with US flags.

Most commonly they’re painted on homes which were built using money sent back from the US and on the concrete above-ground graves in the local cemetery.

What shouldn’t come as a surprise was the cold. Todos Santos is at more than 8,000 feet (2,450 meters). This translated into extremely cold nights in an unheated room under very heavy blankets in Hotel Casa Familiar.

Our Lonely Planet description of this hotel had us expecting very, very basic rooms at a budget price. The reality, however, is that this hotel has two very nice rooms with more on the way. One room has a fireplace, the other has a kitchen. At 100Q (about US$12) per person neither room has a budget price tag, but they’re big and spotless and each has a lovely furnished patio. We went for the room with the kitchen since dining options in Todos Santos are, shall we say, limited. 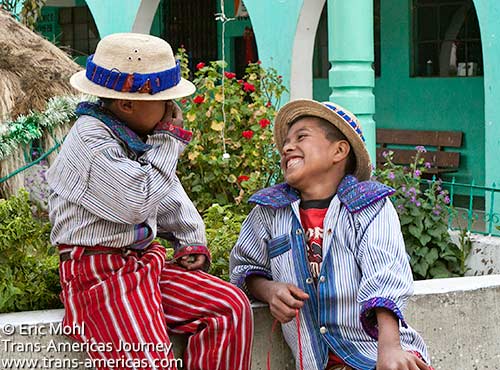 Nearly every resident of Todos Santos wears traditional clothes which are loomed, dyed, and embroidered by hand.

Hotel Casa Familiar is run by a local woman named Christina who also runs the women’s co-operative shop downstairs. The shop is stocked with items made by local women and each piece has a tag on it with the name of the woman who made it. You can buy the traditional Todos Santos style pants and shirts here (more on that later) as well as more tourist-ready items like a beautiful yoga mat carrying bag made out of hand-loomed fabric in a traditional pattern. 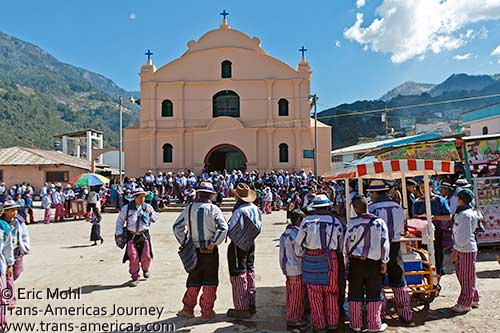 Crowds gather in front of the church in Todos Santos. It’s gotta be hard to tell who’s who.

With so much living Mayan culture in Guatemala, almost every region has its own distinct and colorful way of dressing. All of it is elaborate and and almost universally worn, even among the men who, in most cultures, are the first ones to make the switch to boring old jeans and a t-shirt. 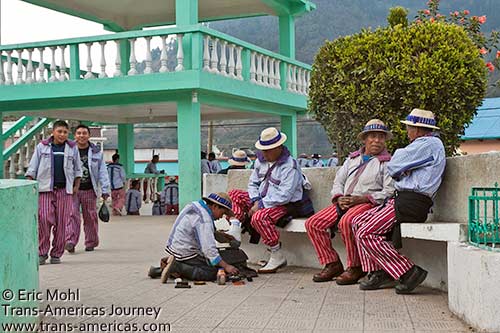 Shoes are the one item of dress that varies in Todos Santos. Here, a man gets his white cowboy boots polished. 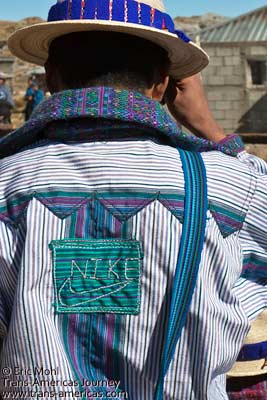 This tteenager has had his mom embroider a Nike swoosh onto the back of his traditional shirt.

We’ve loved all of the traditional clothing that we’ve seen in Guatemala, but it’s hard to beat Todos Santos style, particularly among the men and boys who all wear red pants with white  stripes, a blue and purple shirt with an extra-wide hand-embroidered collar, and a jaunty straw hat with an embroidered band.

The younger generation is starting to customize their outfits with touches like an extra droopy homeboy fit to the pants and international brand names embroidered onto shirts. It was fun to see this creativity and even more fun to imagine a 15-year-old in Todos Santos explaining to his mother why he wants her to stitch a Nike swoosh onto the back of his shirt.

By the way, we recently read an interesting theory that “indigenous regional clothing” was actually imposed by the Spanish when they ruled the region as a way of knowing, at a glance, where a person came from based solely on what they were wearing. If you can support or debunk this theory let us know! 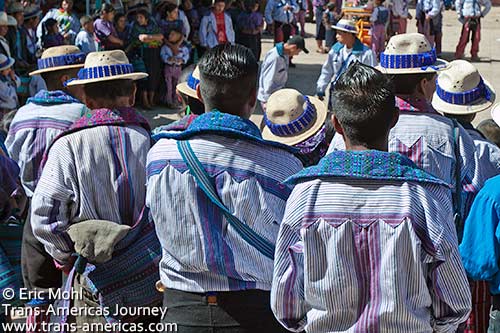 We timed our visit to Todos Santos to coincide with New Year’s celebrations and so did lots of others. There weren’t any other travelers in town for the event, but lots of family members had returned home to celebrate. 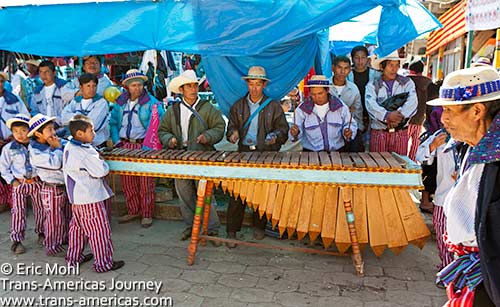 It is not a party in Guatemala without marimba players.

We met a man named Pedro who had been working in the United States for 23 years. He’d just gotten his green card which allowed him to return home to Todos Santos for the first time since he left for the US. His elation at being home and his pride in Todos Santos were palpable. Though he loves his life in the US and would be returning to Nebraska after the holiday, he could hardly wait for his aunt to put the finishing touches on his traditional outfit. 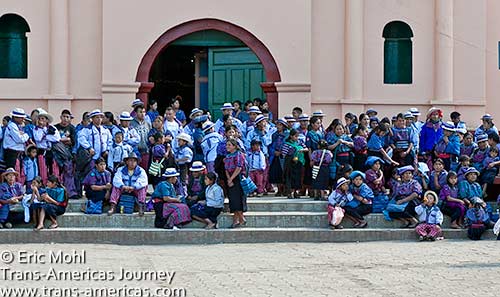 A sea of blue and purple in Todos Santos, Guatemala.

Over the New Year, normally tranquil Todos Santos transforms into a town full of men sharing some kind of sinister liquid which is consumed in quantity resulting in epic stumbling, mumbling, and falling down. It’s mostly messy but harmless. However, we did encounter a young local who practically fell under an oncoming truck, then collapsed on the curb in tears. In the drunken madness he’d lost his friends and now he was (far) too drunk to find them. 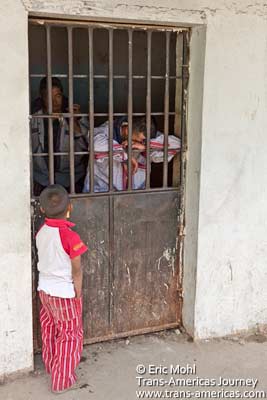 The two room, open-air jail in Todos Santos where many drunks slept it off during New Year’s celebrations.

Though there were many drunk men staggering through town most were harmless–even amusing. The few that got out of hand were rounded up by the police and tossed into a jail straight out of Gunsmoke: Two 10′ X 10′ concrete rooms with gated doors, located right out in the open across the street from the square, were quickly full of men in various stages of drunkenness or epic-looking hangovers.

You really need video to get the full staggering, slurring, sloppy effect of the (mostly harmless) borrachos in Todos Santos. Luckily, we shot some.

We noticed substantially more children asking for “un quetzal” or “un dulce” in and around Todos Santos. Instead of handing out money or candy we hoard bars of soap and packets of shampoo when they’re supplied in the guesthouses where we spend the night and we hand those out instead.