When the 2017 list of Latin America’s 50 Best Restaurants was released we were happy to see Colombian chef Leonor Espinosa’s Restaurante Leo continued to rank high. She also took home honors as the Best Female Chef in Latin America for 2017. Harry Sasson Restaurant, also in Bogotá, moved way up the list and in Lima, Central dropped one spot to #2 to make room for Maido to rise up to #1. We’re delighted to report that our travels have taken us to six more culinary heavy hitters as we continue to eat our way trough the list of Latin America’s 50 Best Restaurants. 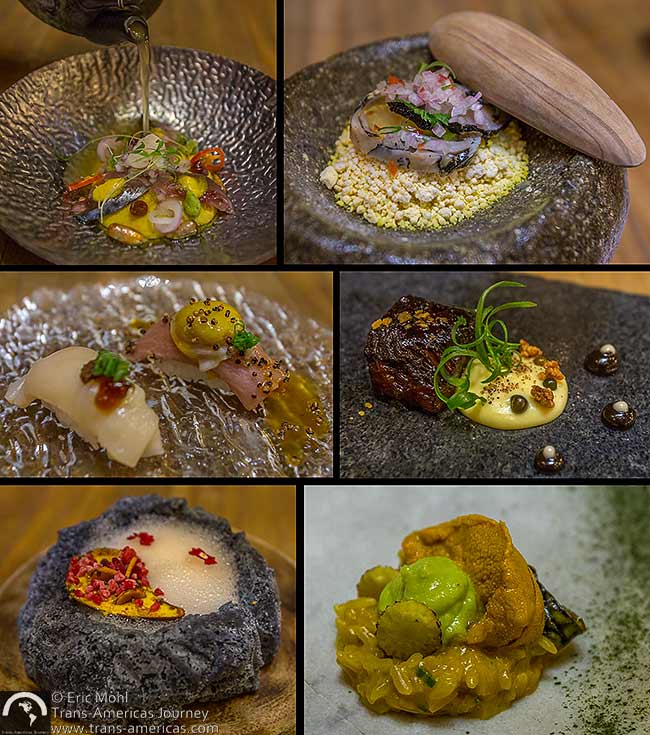 We were excited to finally get a tasting menu reservation at Maido just a few months before it took over the #1 spot (and #8 on the list of The World’s 50 Best Restaurants). Unfortunately, that excitement didn’t last long.

We’ve had a lot of tasting menu meals in Lima and around the world and they’ve all had one thing in common: a story that’s subtly told as the meal becomes a journey guided by the hand of a chef with a point of view. Sadly, our 13-course tasting menu at Maido (one of the most expensive in Lima) was little more than a long series of small plates (you can see some of them, above) brought quickly and mostly without much explanation, context, or a sense of Chef Mitsuharu Tsumura or his vision.

Don’t misunderstand. The food was very good. The famous fish hot dog was playful and satisfying and the raw fish courses (toro nigiri topped with a quail egg, for example) were so outstanding that we wished we’d skipped the tasting menu and booked two seats at the bustling sushi bar instead. The skill and top-notch ingredients in the kitchen were very apparent. What was missing was soul.

Even great restaurants can have a bad night and we’re willing to attribute our disappointment at Maido to an off night and, perhaps, a touch of over hype. But no customer should leave one of the world’s most highly acclaimed restaurants feeling rushed so they could turn the table. 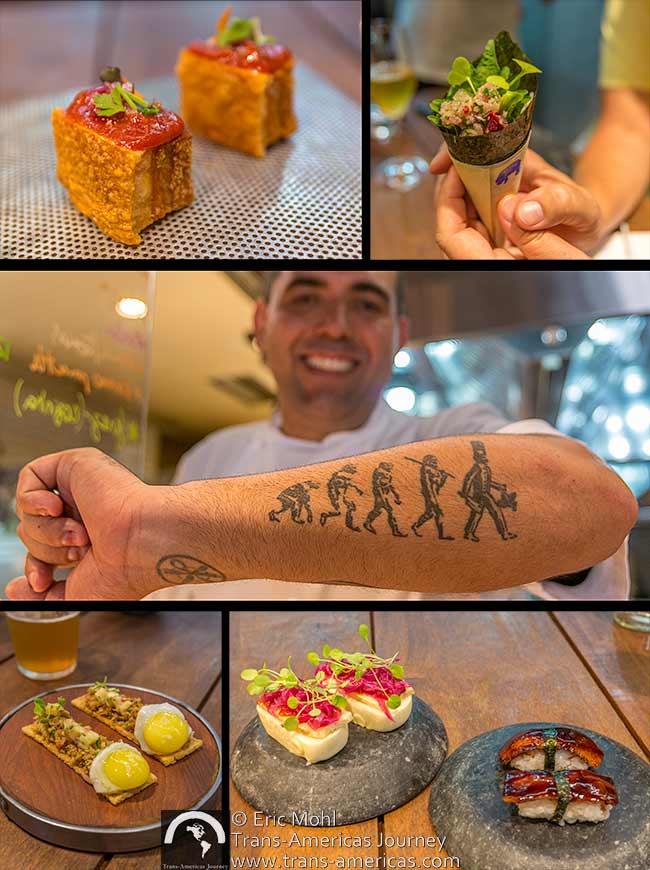 This place rose to #8 from its debut last year at #24. That’s a big jump but we’re not surprised. When we ate at A Casa do Porco we were blown away by the porky goodness being created by Chef Jefferson Rueda who cooks a pig (porco in Portuguese) like no one else.

Insider tips: Go for lunch in the late afternoon for the best chance of getting a table (A Casa do Porco does not close in the afternoon as many restaurants do and they do not take reservations). And though all menu prices are remarkably reasonable, if you’re on a tight budget, grab a fantastic pork sandwich on a homemade ciabatta roll from the restaurant’s to-go window on the street. At R$15 (about US$4.50), it’s a delicious steal.

And find a way to save room for dessert. Saiko Izawa, the pastry chef at A Casa do Porco, was named Best Pastry Chef in Latin America for 2017. 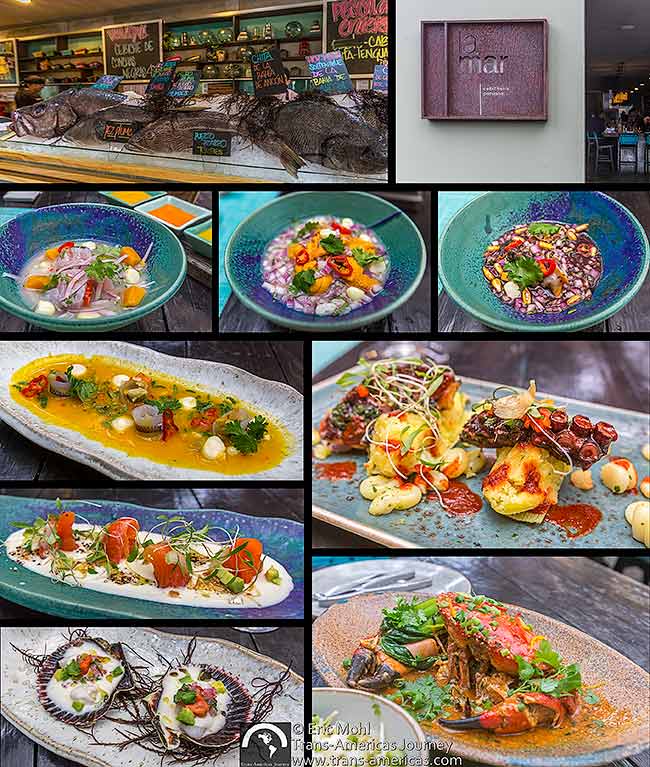 We would eat here every day if we could.

This chicly casual cebicheria, created by Peruvian celebrity chef Gastón Acurio, is an institution in Lima. And for good reason. The ceviche we ate at La Mar puts all other ceviches on notice. The tiradito Andino (sliced marinated raw trout with artichokes, bamboo sprouts, and avocado), sizzling huge shrimp in clarified butter, grilled octopus…it was all amazing.

The inventive chilcanos (a classic Peruvian cocktail made with pisco and ginger ale) were fun without being foofy. The restaurant, #15 on the 2017 list of Latin America’s 50 Best Restaurants, only serves fresh and sustainable fish and seafood sourced from like-minded fishermen and co-ops, so chef Andrés Rodríguez’s menu changes based on what’s available. The sommelier was amazing and the waiters were knowledgeable and proficient in English (if you need that). We would eat at La Mar every day if we could. 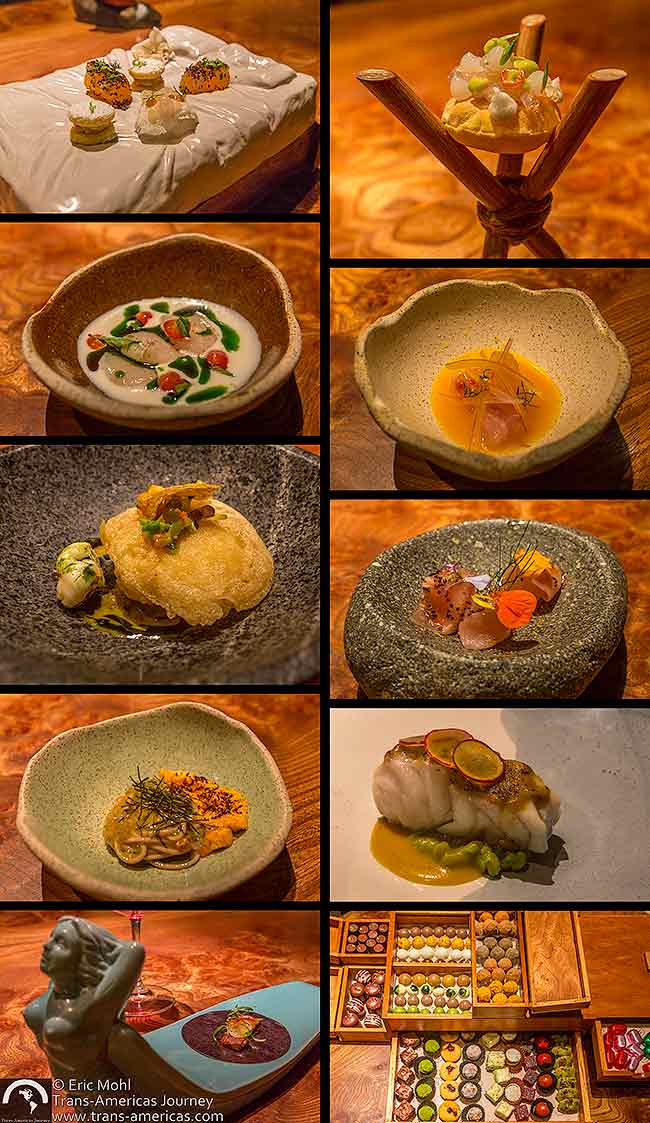 Astrid y Gaston was a pioneer in the Lima food scene, but this restaurant hasn’t run out of delicious surprises yet.

Gastón Acurio is the only chef with two restaurants on the 2017 list of Latin America’s 50 Best Restaurants. In addition to La Mar, his flagship restaurant, Astrid y Gastón is ranked at #7. This place is an enduring classic for a reason: historic building, eclectic design, great people watching, and impeccable Peruvian favorites. Standouts from our nine-course tasting menu included guinea pig Pekinese, confit suckling pig, and a ceviche made with sour orange.

It’s a lot of rich and complex food and at one point we were so stuffed that we took a break and wandered around the 300-year-old mansion to marvel at original tiles and breezy gardens. Then came an avalanche of desserts created by Gastón’s wife Astrid (the box in the photo above is bursting with chocolates). This is not a complaint, just fair warning. 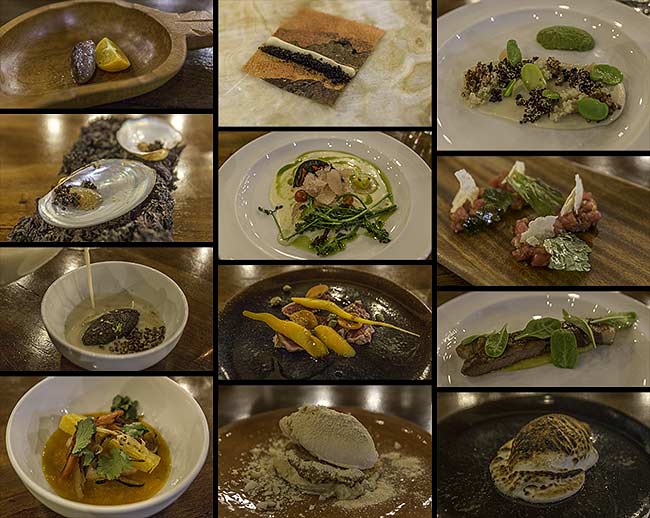 The #14 restaurant is in La Paz, Bolivia and is that country’s only ranking restaurant. Gustu is almost militantly Bolivian, using and serving only ingredients grown or made in Bolivia. This is not a limitation but a challenge to the talented staff, many of them trained at culinary schools opened by the philanthropic arm of Gustu.

We ate at Gustu twice, first for their 10-course tasting menu which featured raw llama, quinoa, dry-aged beef, amaranth “caviar”, and much more in dishes that were somehow rustic and polished at the same time. We later returned for lunch which offers a choice of three appetizers and three mains including meat, fish and veg options, then dessert for 95BS (about US$14). It’s an incredible value. Eat lunch at the bar to be closer to Gustu’s excellent selection of Bolivian craft beers, spirits, and wines. 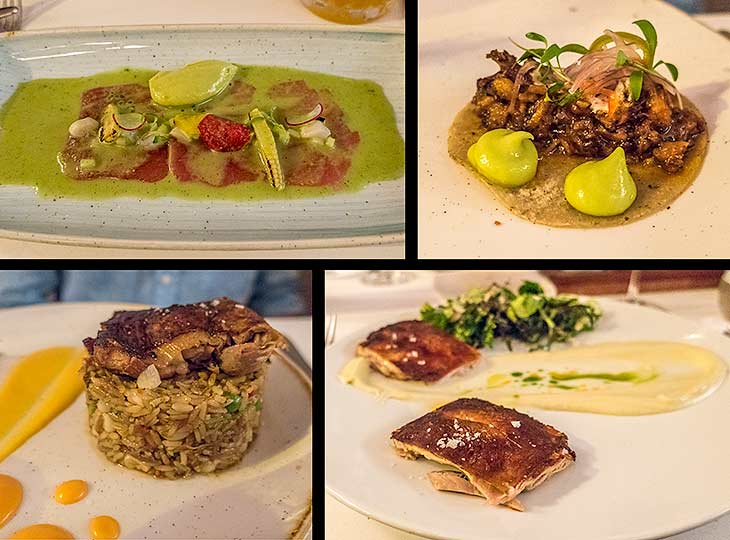 It took us a strangely long time to get to Peruvian chef Rafael Osterling’s eponymous Rafael restaurant, even though there’s one in Bogota and one in Lima. Rafael in Lima is #24 on the 2017 list of Latin America’s 50 Best Restaurants and during a recent dinner visit we fell in love with the casual, modern decor including a pleasingly rambling collection of modern art (loved the 1960s canvas folding beach chair folded and hung on the wall in all it’s graphic and utilitarian splendor).

The bar (where a tapas menu is available) has an impressive selection of libations including a number of bourbons (a rarity in much of Latin America). This inspired us to order a Wonder Woman cocktail with Buffalo Trace bourbon and smoky Laphroaig Scotch. It was splendid. The menu is wide-ranging with something for everyone and a long list of daily appetizer and main course specials. The eating started with a basket of chewy bread with topping choices including organic butter, goat cheese cream, and thin slices of mild pastrami pork.

With so much choice, placing our meal order took some time, but wait staff was patient and helpful (including English) and we never felt rushed. We shared a tuna tiradito started that came already split onto two beautifully presented plates. The sauce was lively and the sliced, raw fish nearly melted in our mouths. The most beautiful plate we ordered was cloud-like gnocchi (the pastas are homemade too) in a goat cheese sauce with cherry tomato halves and thin-sliced radishes. Confit pork came in two luscious squares on a bed of creamed cauliflower. The confit grouper on squid ink rice with scallops and shrimp was the most surprising and satisfying dish – essentially an elegant deconstructed paella.

The extensive dessert menu is full of temptations. Go for it, but leave room for the small bites of elegant sweets brought before your check.

Don’t miss part 1 of our efforts to eat our way through Latin America’s 50 Best Restaurants including meals at Central, Isolina, Restaurante Leo, and many more winners in Colombia and Peru. Part 3 includes epic meals at Chila, Don Julio, El Chato, and many more. And part 4 in the series covers meals in Argentina, Colombia, and Chile at Tegui, 040 Restaurante, Mishiguene, Narda Comedor, and Elena.