Turtle nesting is brutal. First, an enormous female turtle–compelled by an overpowering maternal instinct–hauls her massive self out of the water and lumbers up a sandy beach to the high water line. There she digs a hole using appendages designed for swimming, not shoveling.  Then, if she’s lucky, she’s left in peace to squeeze out dozens of probably doomed turtle eggs. No wonder female sea turtles actually appear to be crying through the whole ordeal. However, normal sea turtle nesting is nothing compared to the turtle trauma that occurs during a turtle arribada like the one we witnessed when we traveled to Playa Ostinal on the Nicoya Peninsula to see turtle nesting in Costa Rica. 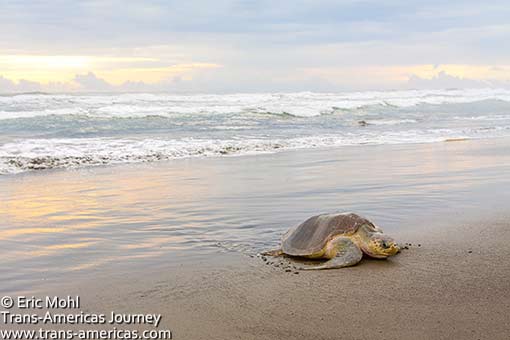 A female olive ridley turtle comes ashore on Playa Ostinal in Costa Rica as part of a massive turtle arribada.

Every year, hundreds of thousands of olive ridley sea turtles swarm the black sand of Playa Ostinal over the course of a week or so. The event, which occurs four times a year near shortly before the new moon and can last up to eight days, is called an arribada. 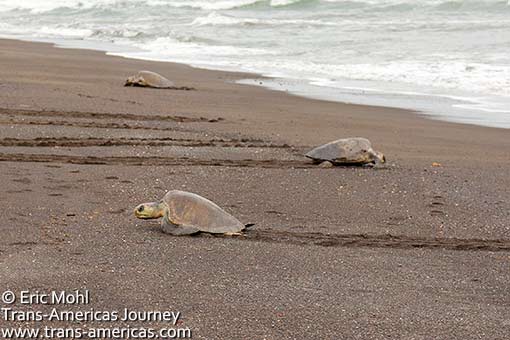 The arribadas in Costa Rica are so important to the species that a 33 square mile (85 square km) area around Playa Ostinal was turned into the Ostinal Wildlife Refuge in 1982. The event is also important for local tourism and a cottage industry of turtle guides has sprung up in the area’s otherwise lazy fishing villages.

You can see the spectacle for yourself in our video, below, showing olive ridley turtles emerging from the sea during the arribada on Playa Ostinal.

Through no planning on our part we happened to be on the Nicoya Peninsula near the start of the arribada. The first days of an arribada seem to bring the highest density of turtles but we couldn’t reach the beach until day four of the invasion. 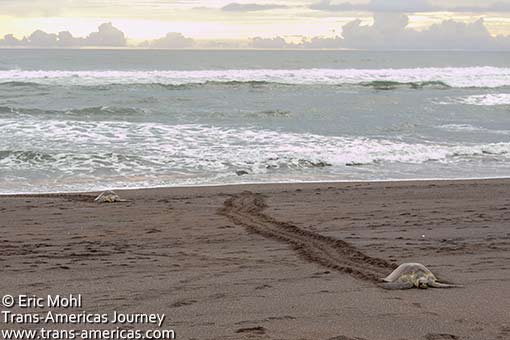 Massive turtle nesting events in Costa Rica are a crucial part of the survival of the olive ridely sea turtle species.

The Globetrotter Girls had posted photos from the first days of the arribada when the beach was swarming with turtles and that’s what we were hoping to see. But when we reached Playa Ostinal on day four we were disappointed to see only several dozen turtles emerging from the gentle surf, laboring up the beach, digging holes or returning to the sea. 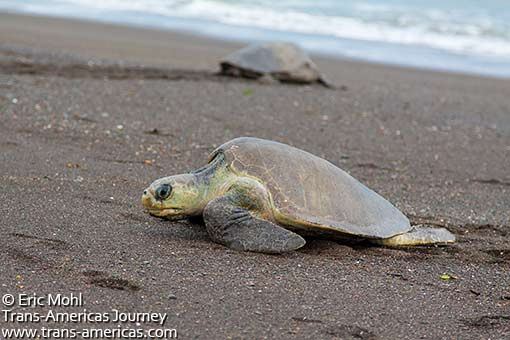 Most of the thousands of olive ridely turtles that take part in the annual arribada nesting frenzy arrive in the first few days. After that, numbers thin out.

Still, that was more sea turtles than we’d ever seen in one place before and it allowed us to really observe all stages of the nesting process. For example, when we arrived one female was in the midst of laying her eggs. From a distance we watched her finish and carefully bury the eggs before turning tail and moving slowly back to the water. But, sadly, that’s not where the process ended. 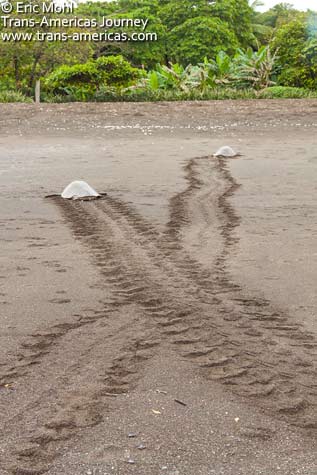 Carnage on the beach

The mother turtle wasn’t even five feet away from her newly-made mound before a pack of local stray dogs was digging it up and devouring her just-laid eggs. A gang of vultures soon joined in the feast. It was carnage on the beach. 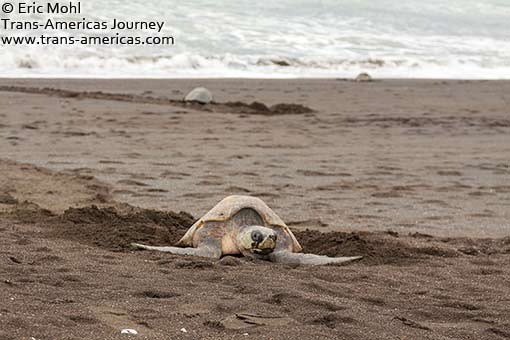 A female olive ridley turtle in the process of digging a nest in which to lay her eggs on Playa Ostinal in Costa Rica.

Bits of white turtle egg shell specks in the black sand all along the high water line was evidence that this feeding frenzy was not an isolated incident. The trees along the beach were heavy with stuffed and smug vultures. Fat-bellied dogs sniffed around halfheartedly. 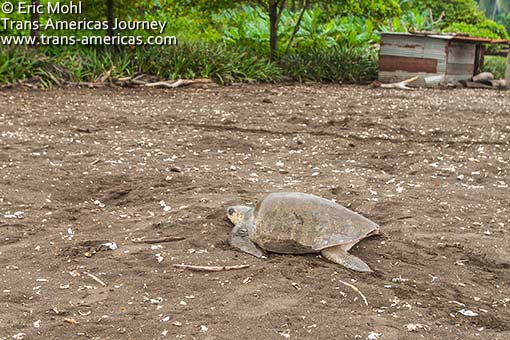 The white bits in the sand above the water line on Playa Ostinal in Costa Rica are bits of turtle egg shell left behind by feasting vultures and dogs.

We were horrified and we scanned the beach looking for some sort of ranger or Ostinal Wildlife Refuge employee who was in charge of patrolling and protecting the turtles. There was no such person. We were told later that so many turtles lay so many eggs on this beach during an arribada that locals are allowed to collect a limited number and sell them to a handful of authorized bars which then sell the eggs to customers as snacks (yes, that’s code for “aphrodisiacs”) and the dogs and vultures are allowed to eat what they can. 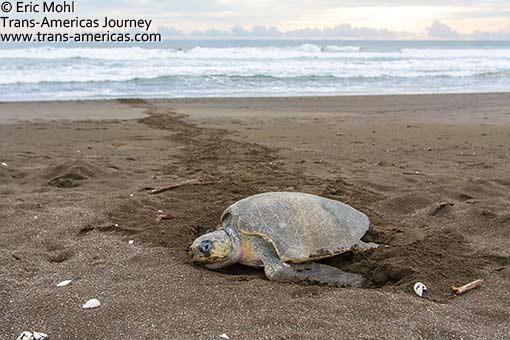 A turtle mom hard at work, just one of thousands who nest on Playa Ostinal during an arribada.

This was in complete contrast to the almost ridiculously sheltered nesting we’d witnessed on other beaches where concerned biologists and locals carefully dig up nests and re-bury turtle eggs in protected and monitored mounds before hand-releasing the hatchlings.

Turtle timing is everything

During an hour or so on Playa Ostinal we saw several dozen turtles come and go. At least five of them never even dug a nest or laid even a single egg before sort of shrugging and returning to the water. We saw two dead turtles on the beach as well, more food for the scavengers though the vultures seemed stuffed and the dogs were roaming without enthusiasm.

We later learned that the strongest, smartest and most experienced turtles usually arrive early in the arribada with younger, weaker and less mature females arriving later. 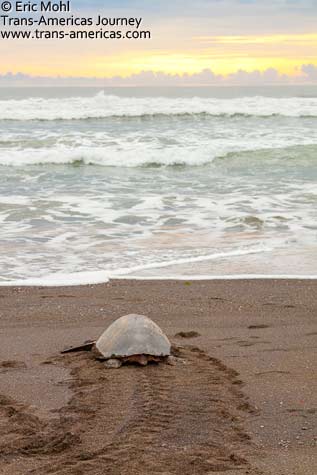 Her work is done here.

We left our first arribada with mixed feelings. We were grateful to have seen the spectacle but disturbed by the carnage and the ineptitude of some of the turtles. How in the world has this species lasted this long? Thankfully, we could retreat to the peace and, yes, harmony of The Harmony Hotel about 7 miles (11.5 km) away on Playa Guiones.

The dirt road to Playa Ostinal can be rough and if you drive there during the rainy season (like we did) be prepared to cross some swollen rivers. During one crossing the water came up to the doors of our truck.

When you arrive in Playa Ostinal you will probably be accosted by many local “guides” who will claim you have to hire one in order to get access to the beach during the arribada. However, we simply parked our truck and wandered the beach on our own so don’t feel compelled to pay for a guide unless you want one.