Confession time: extremes are irresistible to us. Put “st” on the end of it—highest/deepest/longest/widest/oldest/whateverest—and we’re there. So the chance to get to the westernmost point in the lower 48 was too much for us to resist and we headed to Cape Alava, Washington. 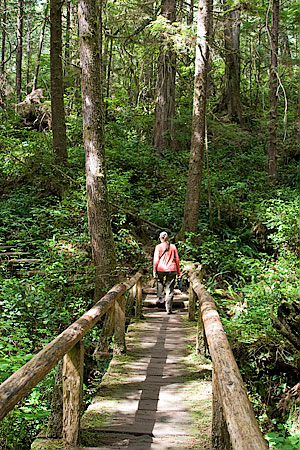 Karen on a stretch of boardwalk that was part of the trail that took us to the westernmost point in the lower 48.

The 7 mile (11 km) round trip trail is a lovely rolling meander through coastal rainforest, almost entirely on a cedar wood boardwalk, sections of which are warped and twisted by the perpetual damp into gorgeous wavy shapes that make it feel like walking on a roller coaster.

When we reached the cape itself we were whacked in the face by some of the most pungent-smelling seaweed we’ve ever encountered. It was low tide and the beach was strewn with the stuff, more than a foot deep in places. 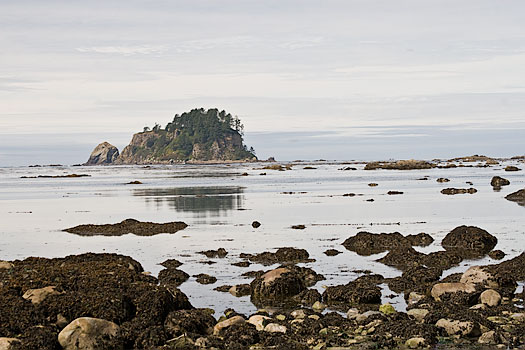 Cape Alava, the westernmost spot in the lower 48.

Just off the coast, very vocal sea lions were sunning themselves on massive boulders that ring an imposing rocky monolith that you used to be able to camp on top of. A juvenile bald eagle thew itself off a massive tree on the inland edge of the sand and circled above us before landing (clumsily) again. Then a man approached and told us that an even more impressive animal could be seen further down the neighboring beach—a dead grey whale.

After slogging through stinky seaweed for more than a mile we still saw no sign of a huge dead whale (something you’d think would be pretty obvious), but a ranger assured us that it was still further along “but probably pretty rank by now since it’s been dead for three or four weeks.”

We are undeterred and, sure enough, we stumbled upon a nearly flesh-free vertebra the size of a spare tire. Then another vertebra. Then a rib. Then the entire whale—or what was left of it. 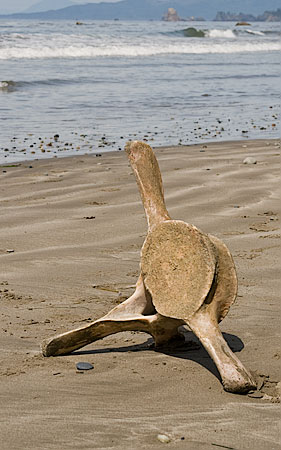 Beaten by the surf, ravaged by time and the elements, and picked at by countless animals, the poor creature looks more like a truck-sized mound of pink lard than one of the noblest, most mysterious beasts on the planet. What it smelled like defies description. As long as we stayed upwind it was bearable. 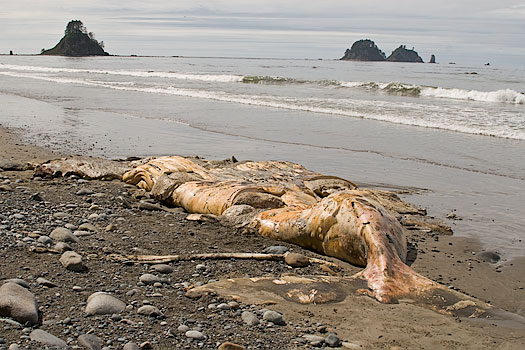 What’s left of a beached grey whale after four weeks on the sand.