Crossing international borders in Latin American is rarely easy or pleasant (why do they always smell like pee and desperation?). Things are even more complicated when you’re driving across borders in your own vehicle as part of an overland road trip. These border crossing 101 travel tips will help you cross from Peñas Blancas, Costa Rica to Nicaragua smoothly with or without a vehicle.

Lay of the land: You are leaving one of the richest countries in Central America (Costa Rica) and entering one of the poorest (Nicaragua) and the differences become apparent right at the border. The Costa Rican side has a brand new air conditioned immigration hall, working ATMs and an inviting cafeteria. The Nica side, though pleasant and orderly, is dusty and peppered with sandal sellers, money changers and stray dogs. And don’t expect to find anything to eat.

Big rigs can get backed up for miles on either side of this border. If you’re driving your own vehicle across you are allowed to cut the line in front of them.  But drive carefully. This is a two lane road so passing the parked big rigs means driving against traffic in the wrong lane. Go slow and always be ready with an escape plan that allows you to merge back in with the parked big rigs if a bus or other vehicle needs to get through in the oncoming lane.

On the Costa Rican side you need to cancel your vehicle importation papers at an office on your left about 200 yards (200 meters) after you pass through the gate into the border zone. Then you drive a short distance to the new immigration office where you get an exit stamp. 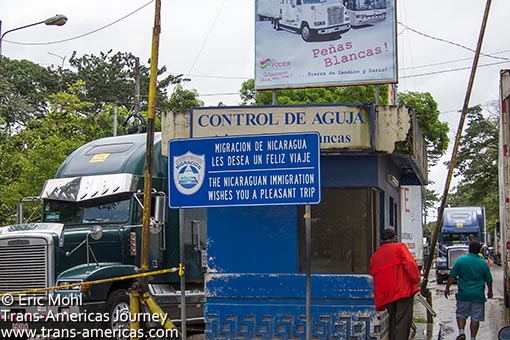 At the border between Costa Rica and Nicaragua.

On the Nica side things are a bit trickier. As you leave Costa Rica and enter Nicaragua you must pass through mandatory vehicle fumigation. You then pull up to the immigration and aduana (customs) building where you first to go to the immigration window to get your entry stamp. However, before you step up to the window you first need to pay US$1 to the municipality at the booth in front. Following this you need to go to the building across the parking lot and pay the tourist vehicle entry fee of US$5 in the tourism office. Then you need to buy mandatory liability insurance for your vehicle at one of the insurance desks in the room next door.

Once the insurance is in hand you take these documents and receipts, along with the standard car documents with copies (title, registration, drivers license, passport), and go to the aduana office (DGI) adjoining the immigration area you first visited. There, your paper work is reviewed and entered into the computer and you are given the preliminary importation document. You then need to track down the police inspector and the aduana inspector who will each quickly inspect your vehicle and its contents before signing the paperwork.

Once those signatures are in hand you re-enter the aduana office and bring your papers to the uniformed officer sitting at a desk next to the agent who issued you your preliminary paperwork. The officer reviews your documents, staples some papers together and signs off on them. You then return to the same agent who issued the preliminary paperwork and he or she takes the documents and gives you your final importation permit.

Told you it was complicated. At this point you are free to go with just a quick check of your documents by officials as you exit the border area.

Elapsed time: About half an hour on the Costa Rican side and another hour on the Nica side.

Fees: There are no fees to exit Costa Rica. On the Nica side we paid US$4 for mandatory fumigation, US$12 per person for our visa, $5 tourist vehicle entrance, $1 per person municipality fee and US$12 for 30 days of vehicle liability insurance. There was no fee at all for the temporary importation permit for our truck. That’s a grand total of US$47 for the two of us and our truck.

Number of days they gave us: We were issued 90 day visas and a 30 day temporary importation permit (TIP) for our truck (see important CA-4 visa information below). The TIP can be extended twice for 30 days each time at the DGI office in Managua shown on the map below.

Vehicle insurance requirements: You must buy insurance (US$12 for 30 days) at the border in order to drive in Nicaragua.

Where to fill up: Gas (and everything else) is cheaper in Nicaragua so wait to fill up there. Note, the nearest gas station on the Nicaraguan side is in Rivas about 22 miles (35 km) beyond the border.

Need to know:  In 2006, El Salvador, Guatemala, Nicaragua, and Honduras joined together to create the so-called CA-4 (Central American 4) group of countries all honoring and enforcing one CA-4 visa governed by rules spelled out in the CA-4 Border Control Agreement. Tourists are allowed to spend up to 90 days in total in any combination of the four participating countries. The clock starts ticking on your CA-4 visa the moment you step foot in any of the CA-4 countries Though Costa Rica is in Central America it does not participate in the CA-4 Border Control Agreement so your time in Costa Rica does not count against the total allowed to you under CA-4 rules.

Also, our ATM cards did not work at most of the ATMs in Nicaragua. Consider stocking up on dollars in Costa Rica where dollars are dispensed from ATMs at no additional charge. There’s a BCR mobile ATM on the Costa Rica side of the border which does not charge a transaction fee and will dispense dollars.

Overall border rating: We’ve now crossed the border between Nicaragua and Costa Rica at Peñas Blancas four times and it’s always been relatively efficient and free of corruption or bribery. Even the money changers and kids offering to help you with your paperwork on the Nica side aren’t too persistent.

A new border crossing between Costa Rica and Nicaragua over the Rio San Juan, which forms part of the border between the two countries, is scheduled to be open in 2014. However, this is Central America and 2015 seems more likely especially since these two countries have ongoing border issues tainted by accusations of territorial expansionism.

We wouldn’t have believed this crossing was even real if we hadn’t seen a well-under-way “Santa Fé Bridge” over the Rio San Juan when we visited the area. This US$30 million Japanese-funded project began in 2012 and, when completed and opened, this new route will be a much more direct way of heading north or south, by-passing the coastal mountains of Costa Rica and the chaos of Managua, directly linking central Nicaragua with central Costa Rica.

This new crossing should also alleviate the truck backup and craziness at the overburdened Peñas Blancas border, currently the only land border connecting these two countries. In preparation for the opening of this border crossing the notoriously slow and rough 60+ mile (100 km) section of road heading into San Carlos, Nicaragua from Managua, which used to take several hours, has been upgraded into one of the best roads in Central America with perfect pavement, multi-lanes and (for the moment) very little traffic.

Construction of the “Santa Fé Bridge”, a US$30 million dollar Japanese-funded project that will span the Rio San Juan and create a new, easier border crossing between Costa Rica and Nicaragua. This is what it looked like when we were in the area in December of 2012. Officials say this crossing could be open in 2014.

Crossing the border from Nicaragua to Costa Rica? Get the details in this post.