A visit to the town of Chinchero in the Sacred Valley of Peru delivers an Incan archaeological site, a colonial church, and living Incan culture and traditions. Lucky visitors may also get to crash a wedding and active travelers can also plan to hike part of the Inca Trail.

You get awesome views of the Sacred Valley (lower right covered with fog) from the plateau where Chinchero is located. Notice 19,334 foot (1,893 meter) Nevado Veronica (middle-right) and, and 20574 foot (6,271 meter) Salkantay (left).

The Inca loved this valley which was cut by the Urubamba River and offered fertile soil that allowed the rising empire to feed its people. This reverence led to the name Sacred Valley of the Incas (Valle Sagrada de los Incas in Spanish). Other cultures thrived in the valley before the Inca including the Chanapata, the Qotacalla, and the Killke. 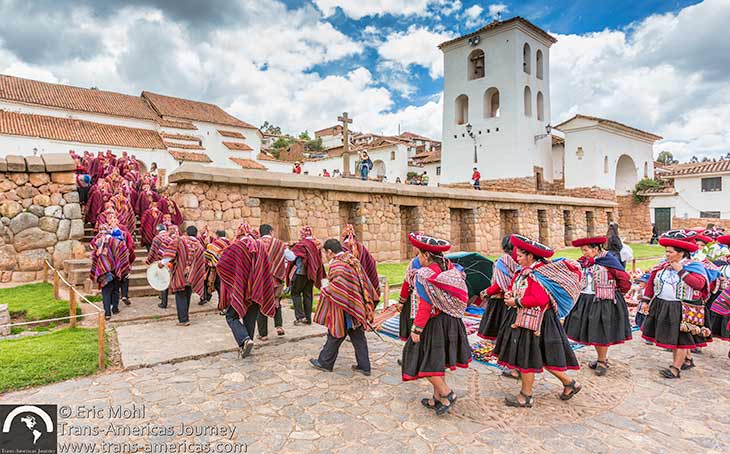 Traditionally-dressed locals file into the church in Chinchero for a wedding.

Around 1480, Incan ruler Topa Inca Yupanqui built a royal estate. Experts believe the remains of that estate are scattered in and around what is now the town of Chinchero. However, most of the remains of the estate remain unexcavated. 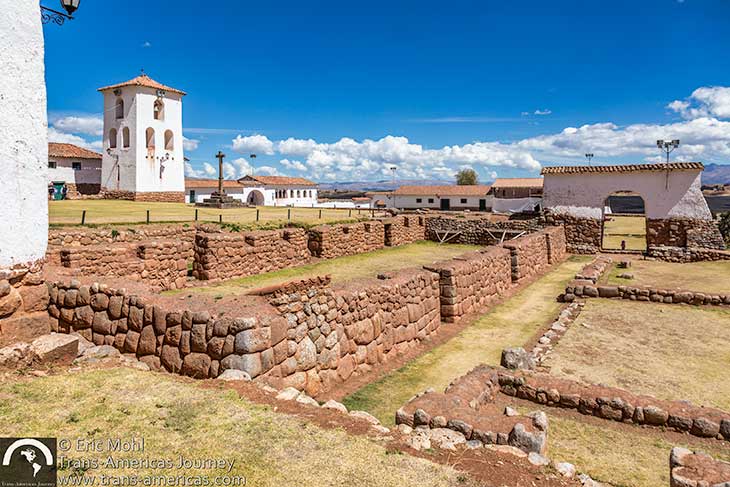 Remains of Incan-built stone building foundations in front of the church that Spanish conquistadors built atop Incan ruins in the 1600s.

The parts that are visible are concentrated around the church where visitors can see the remains of stone foundations and walls. 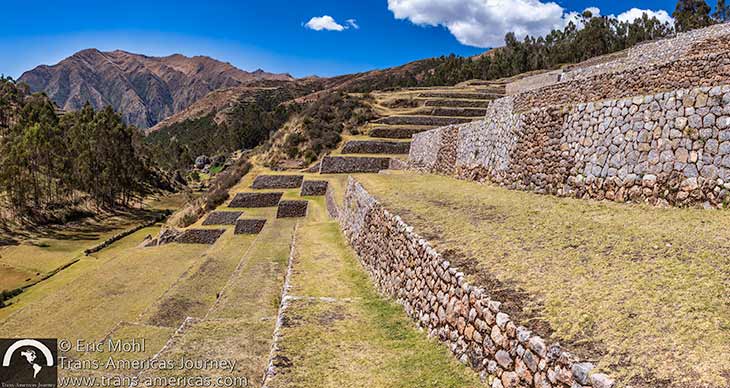 And it wouldn’t be an Incan archaeological site without a lot of terracing up and down the surrounding hillsides which allowed the Inca to grow crops. 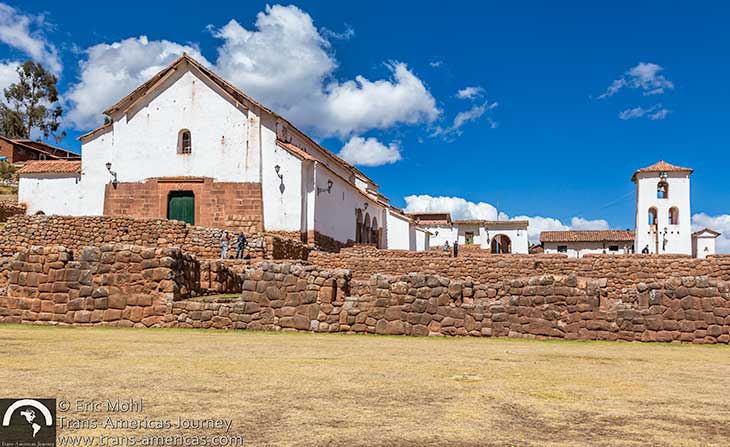 The most striking thing to see is the church which was built in the 1600s by Spanish conquistadors following their defeat of the Inca. In typical conquistador style, the church was built on top of Incan ruins using stones plundered from Incan constructions. Inside, you’ll find impressive murals and framed paintings in the Cusqueño style, plus an elaborately painted wood ceiling. Photos are not allowed inside the church. 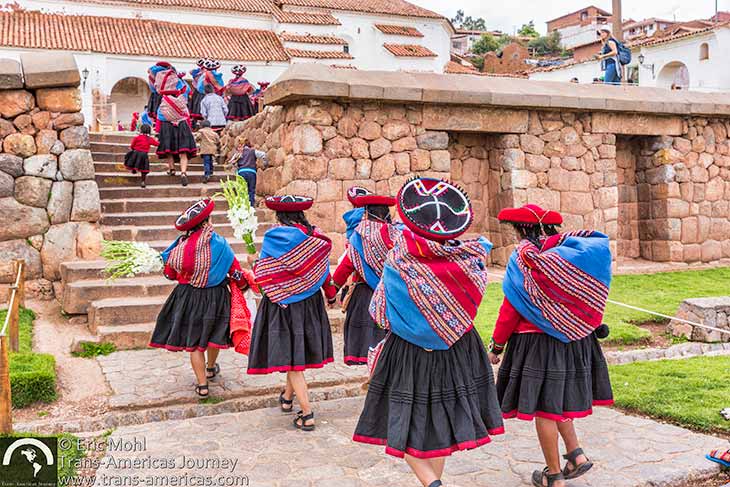 More locals arriving for a wedding in the church in Chinchero.

In many ways, the town of Chinchero is an archaeological site too. Residents are descendants of the Inca and many wear traditional clothing and maintain other traditions as well. 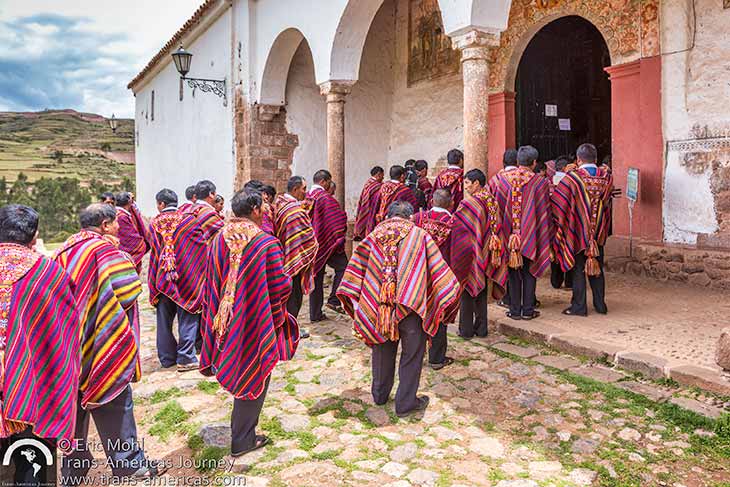 Local men arrive for a wedding in the church in Chinchero. Note the long knit hats hanging down each man’s back. 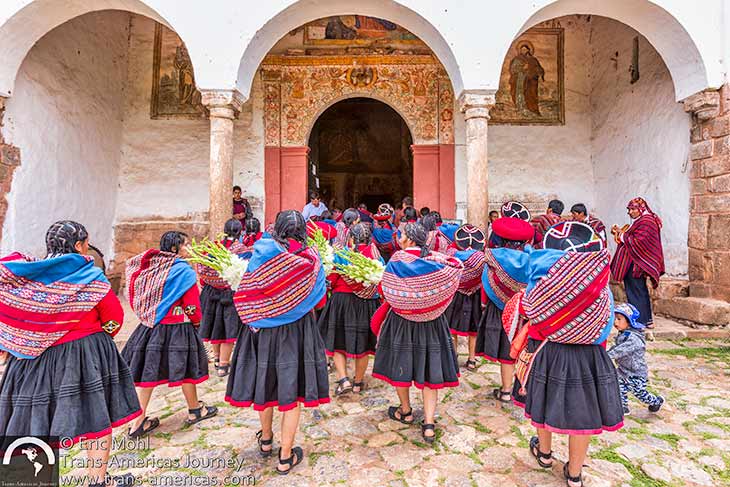 When we were in Chinchero we got lucky. A local wedding was taking place and we watched as dozens of locals, dressed in their finest, filed through town and into the church. 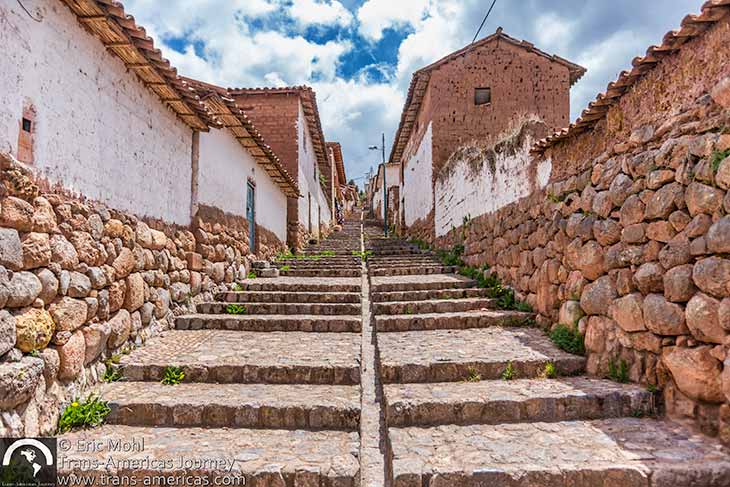 A typical street in the old part of Chinchero, Peru where Incan traditions live on.

Many inhabitants live in structures built on Incan foundations, so it’s worth wandering around this small, traditional town during your visit. 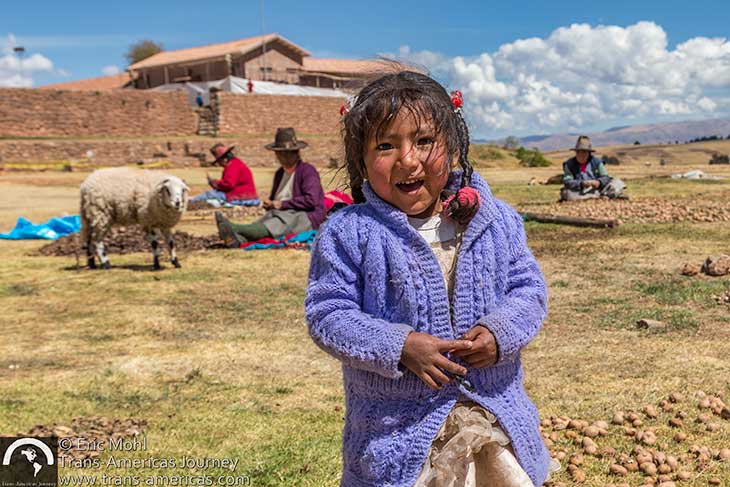 A girl and her family use a field near the church in Chinchero to dry potatoes in the sun. 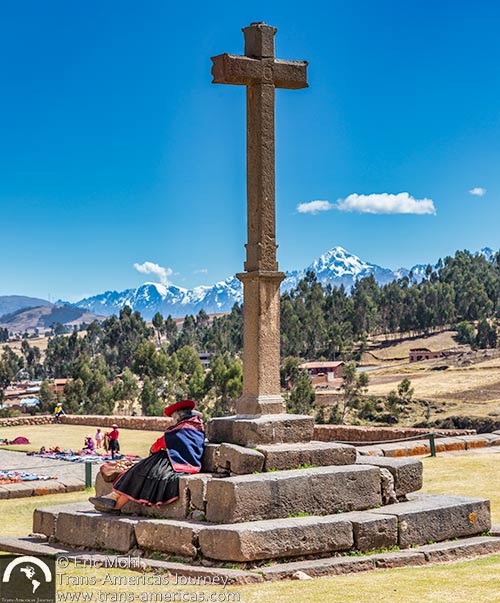 A local woman takes a nap on the base of a cross in front of the church in the town of Chinchero, Peru.

Chinchero is located on a plateau between Cusco and the Sacred Valley at an elevation of more than 12,000 feet (3,650 meters). Counter the elevation by drinking a lot of water and taking it easy. Chinchero is just a few miles from the Moray archaeological site, so many travelers do both sites in the same day. 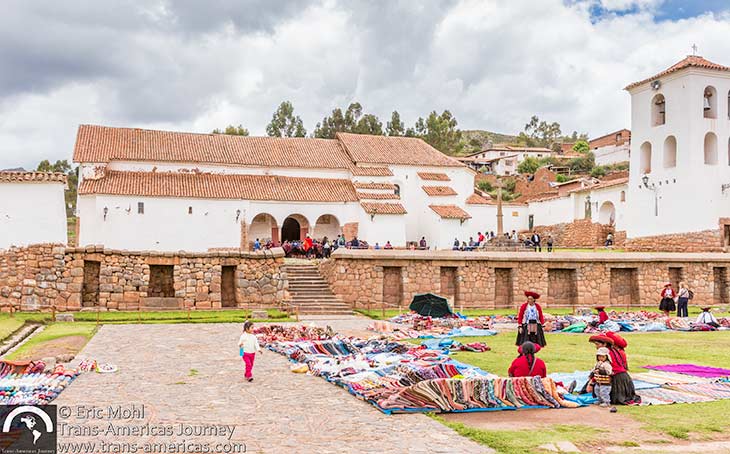 If you have a keen eye, you may be able to find an authentic high-quality hand-woven textile among the mass produced mediocrity sold at the daily market that sets up in front of the church in Chinchero, Peru.

Every day, a market is set up in front of the church in Chinchero. Most vendors sell unremarkable mass-produced junk, but with time and a keen eye, you may be able to spot true examples of traditional textiles. Karen’s mom bought a lovely, small, antique, hand-woven textile that was so fine it earned her compliments from locals as we walked back to our truck with it. On Sundays, a local market also sets up in the new part of town along the highway. This is a good place to go if you want to see more 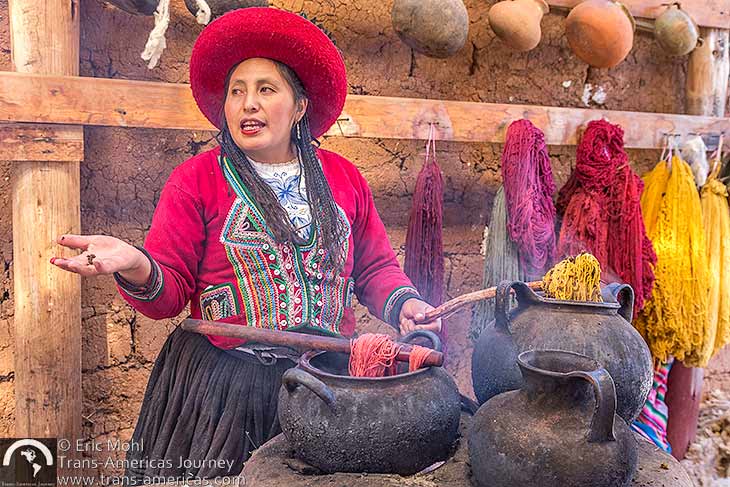 A woman at Centro Textil URPI, near Chinchero, explains how spun fibers from alpacas and suris are dyed using natural elements like seeds, leaves, and root.

Speaking of weaving, textile lovers may also want to visit the Centro Textil URPI while in Chinchero. Located just a few blocks from the center, this weaving/textile cooperative was created by a group of families to preserve weaving traditions and promote modern weaving work. As you enter, a few alpacas and suris (the dreadlocked version of the camelid family) greet you as examples of where the weaving fiber comes from. 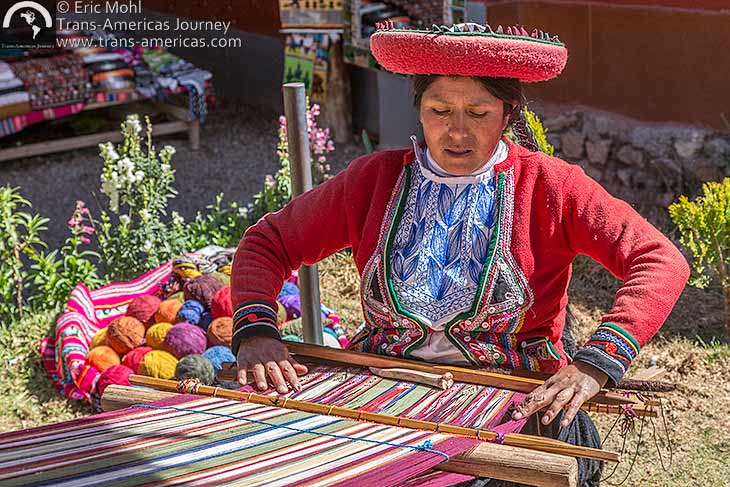 A woman at Centro Textil URPI, near Chinchero, demonstrates a weaving technique.

Traditionally-dressed women explain the dying process (in Spanish and English) which relies on using leaves, seeds, and other natural elements to achieve the colors they want. Other women demonstrate weaving techniques. And, of course, there are a lot of hand-made items for sale. 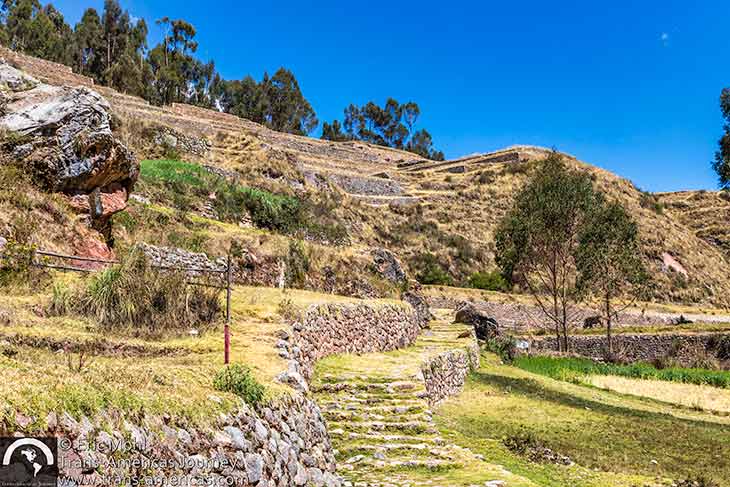 Part of the Inca Trail down into the Sacred Valley from Chinchero. Note the Incan terracing on the hillsides above.

If you have time, you can hike from the church in Chinchero to the village of Urquillos down in the Sacred Valley via a section of the Inca Trail that has been rebuilt and is open to hikers. The 5 mile (8 km) trail passes through a gorgeous canyon and there are many views of snow and glacier-capped mountains as you walk down, down, down. Allow three hours to reach Urquillos. Either arrange to be picked up in Urquillos or walk a bit further to the main road through the Sacred Valley where you can get a bus to other destinations in the valley or even back to Cusco. 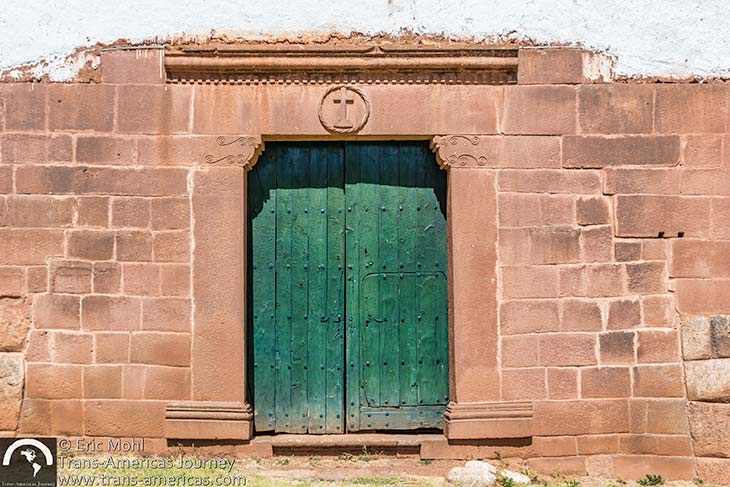 Fun fact: The Last Movie, directed by–co-written by, edited by, and starring Dennis Hopper–is a trippy, tale about a stunt man who gets tangled up in a make-believe movie shoot in Peru. The Last Movie, now considered a cult classic, was filmed almost entirely in Chinchero including many scenes shot in front of the Chinchero church. The original title of the movie was Chinchero. Even today, we’re not sure what the residents of Chinchero would think if a film crew turned up to shoot a movie in their little town. We can only imagine what was going through their heads when Dennis Hopper and his drug-fueled cowboy hippie team (it was Michelle Phillips’ first movie and also starred Kris Kristoferson) descended on their community in 1970 and stayed for months.

And here’s our guide to restaurants, sightseeing, and hotels in Cusco,  everything you need to know about visiting Machu Picchu, and our day-by-day guide to hiking the Inca Trail