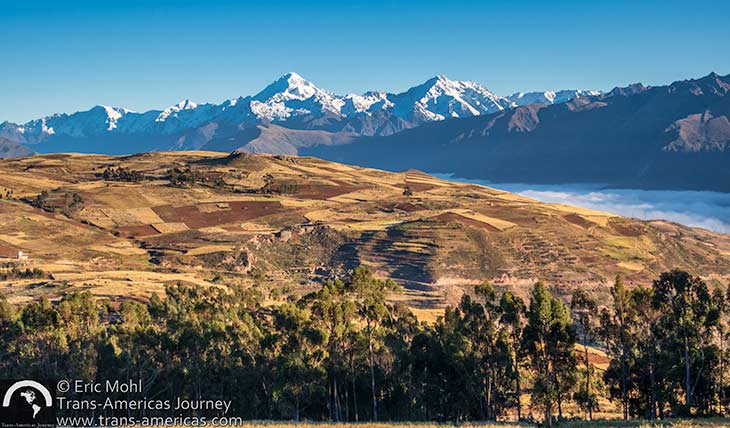 The scenic Sacred Valley in Peru with snow-capped 19,344 foot (5,893 meter) Mount Veronica in the distance.

The Inca loved this valley which was cut by the Urubamba River and offered fertile soil that allowed the rising empire to feed its people. This reverence led to the name Sacred Valley of the Incas (Valle Sagrada de los Incas in Spanish). The Incan archaeological sites in the valley are a major tourist draw, including Ollantaytambo, Pisac, Moray, and Chinchero. After you’ve marveled at those sites, check out these (mostly) non-archaeological things to do in the Sacred Valley.

Top 9 things to do in the Sacred Valley

It’s strange to think of a salt farm so far from the sea, but in the village of Maras people have been harvesting salt since pre-Incan times thanks to an unusual naturally salty spring. Over the years, members of the Maras community have carefully diverted the salty spring water to feed a series of shallow ponds and create the Salinas de Maras (10 soles/about US$3 per person). 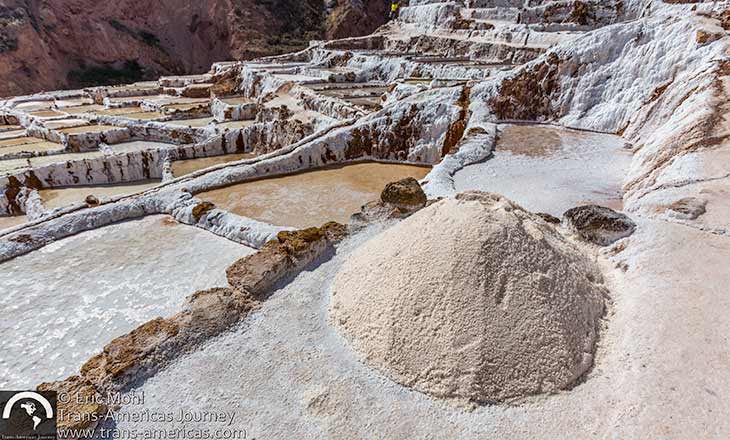 A pile of salt at the pre-Incan Maras Salt Ponds in the Sacred Valley in Peru.

Each of the thousands of salt ponds is owned, maintained, and harvested by a specific family. As the water slowly evaporates from each pond, salt crystals are left behind. The first scrape of crystals is the premium white stuff. The second scrape of crystals harvests pink salt which is still edible. The third scraping of salt is used for livestock. A lot of Maras salt is exported around the world and you can buy salt at the site. 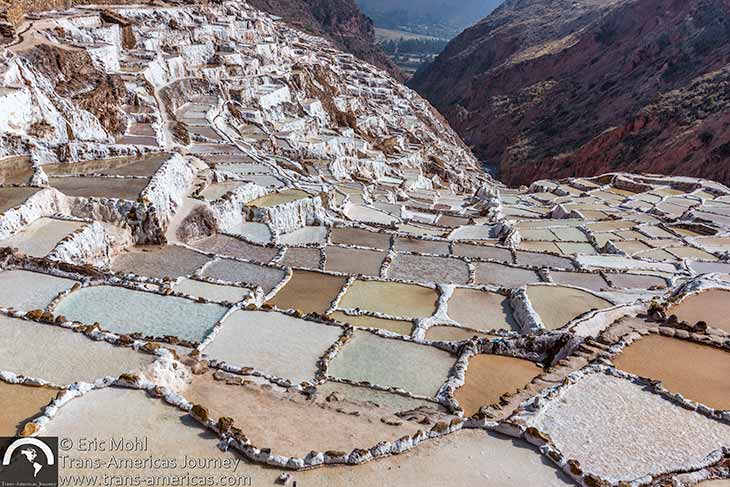 Each of the thousands of salt ponds at Maras is owned, tended, and harvested by a specific family

Visitors to the Maras salt ponds used to be able to walk freely among the ponds, but access was recently restricted to a viewpoint above the ponds. You can reach Maras by vehicle or you can hike or horseback ride up from the Sacred Valley. Salinas de Maras is just a few miles from the Moray archaeological site so you can visit both in one day if you like.

Get an overview of the Maras salt ponds in our drone travel video, below.

When we were at the Cochahuasi Animal Sanctuary the place was rehabilitating three pumas, 11 Andean condors, a margay (which is a small wild cat that looks like a mini jaguar), many exotic birds, various llama and alpacas, some deer, and a few tortoises. All had been rescued from unlawful captivity with the goal of eventually releasing them back into the wild. They also had a mating pair of Andean condors and they hope to be able to release their offspring on a regular basis to replenish this species numbers in the wild. 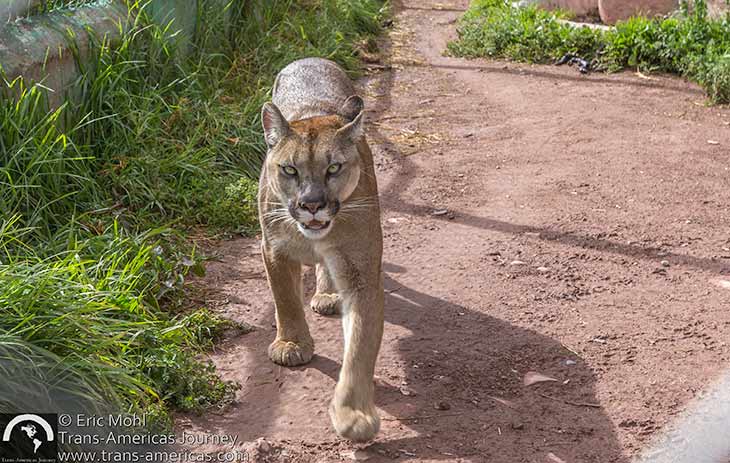 That’s a rescued puma coming in for a closer look at us (from behind a fence) at the Cochahuasi Animal Sanctuary in the Sacred Valley.

The privately-owned facility, which opened in 2007, operates on a low budget (your entry fee of 10 soles/about US$3 helps fund the place), but staff members are doing the very best they can with the land, facilities, and food they can afford. 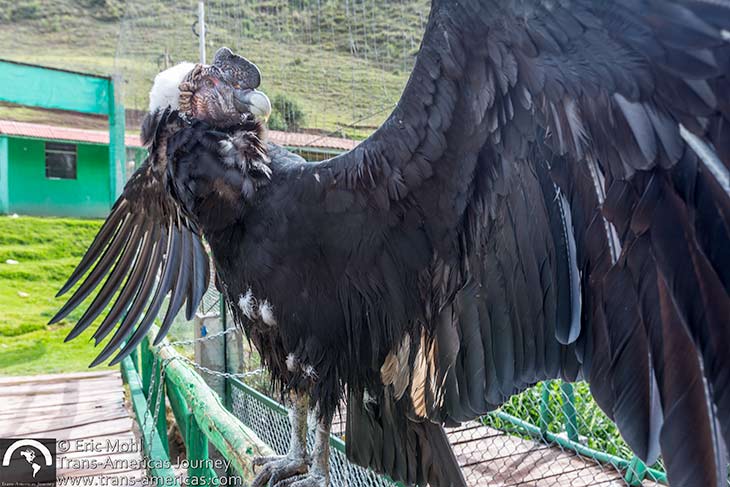 Have you ever been this close to a condor?

A highlight is the chance to stand so close to Andean condors, which have become accustomed to humans, that you can practically count their feathers. It’s a privileged view of this endangered species.

Across the highway from the animal sanctuary is the Awana Kancha weaving center which offers dyeing and weaving demonstrations. 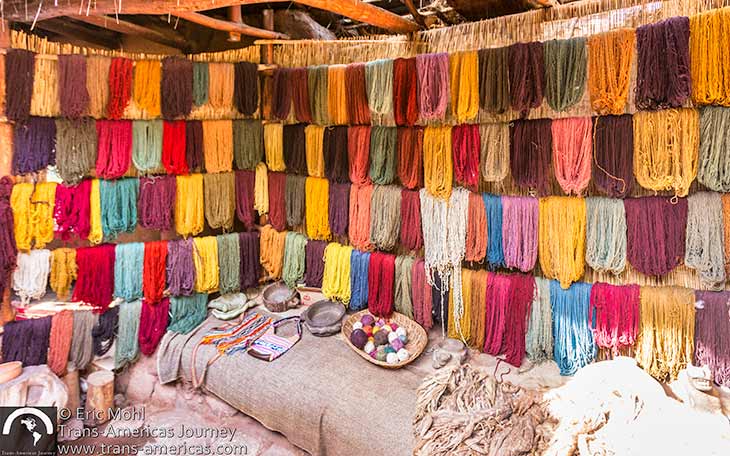 There’s also a large store selling a better-than-average range of traditional and modern textiles, clothing, and more. It’s a decent place to find a small souvenir or gift to bring home.

Behind the El Albergue Hotel at the train station in Ollantaytambo, you will find the Caña Alta Andean Distillery. Started in 2015, this distillery makes a local favorite called cañazo from double distilling sugar cane. The joven (young) variety is clear like water while the reposado (aged) version is the color of light honey thanks to time spent aging on wood chips and in French or California oak barrels. 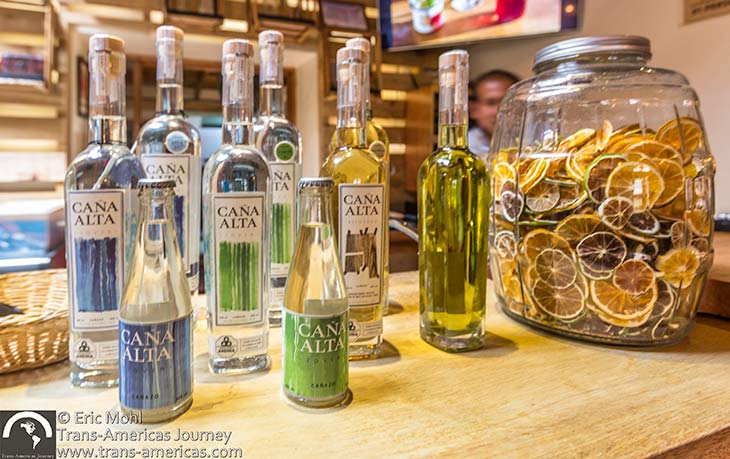 Hand-crafted hooch at the Caña Alta distillery in Ollantaytambo in the Sacred Valley.

They also make an infused hooch called Matacuy which is flavored with herbs grown in an adjacent organic farm and with other more unexpected ingredients like small fish from Lake Titicaca, Andean cheese, and charque (dried llama) which was delicious…silky, salty, rich, umami, and totally unexpected. 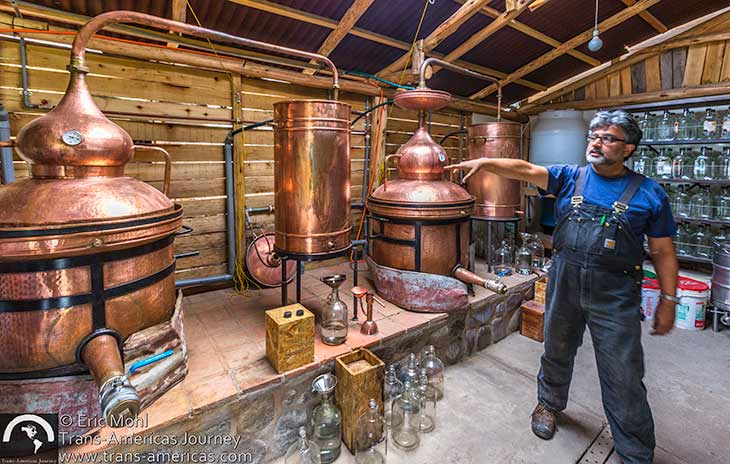 Joaquin Randall in mid-explanation at the Caña Alta distillery.

The distillery welcomes visitors and they love to explain their process and show off their beautiful stills. If you’re lucky, gregarious owner Joaquin Randall may be there. You can also buy bottles directly from the distillery.

You can’t swing a cuy in the Sacred Valley without hitting some sort of archaeological site. The hills and valley floor are littered with them well beyond the most protected and famous official sites. Some are so lowkey you might drive right past them, like Palacio del Sayri Túpac. On the northwest side of the Manco II Plaza in the town of Yucay, you’ll notice a dilapidated adobe building. There is no sign and no fanfare (and no entry ticket required), yet this building is part of the Palacio del Sayri Túpac which was one of the last Incan settlements established before the Incan empire succumbed to Spanish conquistadors. 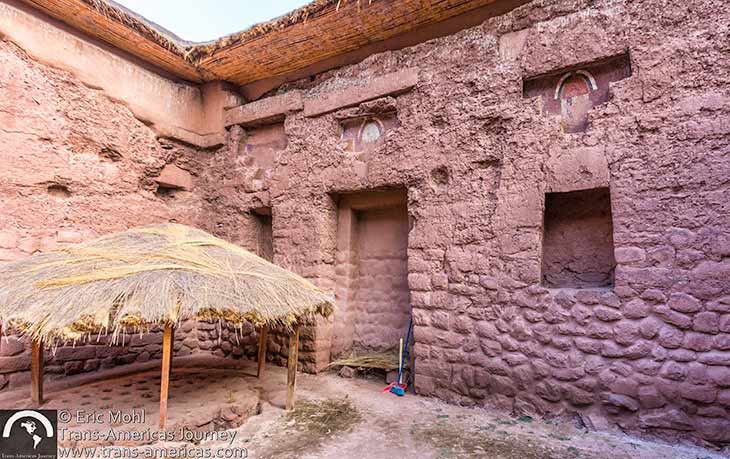 Notice the decorative painting high up on the walls inside the Palacio del Sayri Túpac Incan site in the town of Tucay.

After accepting a forced peace deal with the invaders around 1550, Sayri Túpac built a “palace” in Yucay where the Spaniards allowed him and his band of followers to reside in a short-lived co-existence. The structure on the square is made from stone and clay (influenced by Tiwanaku building techniques) not the Incan standard of cut and fit stones.

Experts believe it was probably used as a ceremonial and astronomical building and was likely used until 1558. Inside, we found decorative painting that was in remarkably good condition despite the fact that the structure had no roof and the only visible protection we could see was the addition of small overhangs to attempt to keep wind and rain from impacting the walls.

There are other related structures in Yucay along with terraced hillsides and other Incan elements. Next to the ruin is an artist’s shop run by Javier Puma (phone: 974 723533). If he’s around he’ll come out and explain the ruins to you, including the fact that there is allegedly a tunnel from the ruins that goes under the plaza to an Incan building across the way. Javier can also guide you on a 2-hour hike to take in Incan walls, terraces, viaducts, and some painting in the foothills above Yucay.

Another Incan site that’s even further off the radar is the Iglesia Ñaupa. Some say this mysterious site is a huaca, which is a Quechua word for a sacred place. Some suggest that it’s a portal used by Ñaupas (inhabitants of the spirit world) to travel through time.

You will likely have the mysterious Iglesia Ñaupa Inca site to yourself.

Here’s what we can tell you after visiting the Iglesia Ñaupa: In a natural cave, niches and doorways have been cut into solid stone and a stone monolith has been precisely and elegantly carved to create what some say is an altar or a shrine. But carved by whom? And for what purpose? Those are just a few of the mysteries that still surround Iglesia Ñaupa. 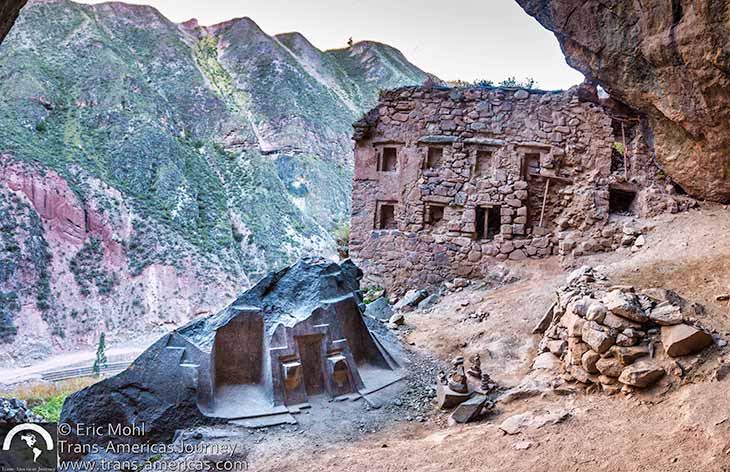 Questions abound about the Iglesia Ñaupa Incan site in the Sacred Valley.

To reach Iglesia Ñaupa, turn off the road through the Sacred Valley at the town of Pachar (you will see a bridge and a sign for Cervezeria Valle Sagrada). Cross over the bridge and begin the 1.6 miles (2.6 km) walk to Iglesia Ñaupa by continuing through a peaceful valley. Eventually, you’ll walk along railroad tracks for a short distance, then you’ll see a small trail to the right. This steep trail through old hillside terraces leads to Iglesia Ñaupa. Retrace your steps back out from the site. Allow 45 minutes each way for the walk plus at least 20 minutes to appreciate the site itself. When you’re back at the main road through the valley, treat yourself with an excellent craft beer at the Cervezeria Valle Sagrada brewpub which you’ll see next to the bridge.

One of the best ways to appreciate the natural beauty of the Sacred Valley is on horseback. It’s even better when that horse is a Peruvian Paso. Our friends Yessenia and Fernando run Retreat in the Woods where they raise and train Peruvian Paso horses, famous for their high-stepping yet whisper smooth gait and lead small groups on horseback through the lovely valley scenery near the town of Huaran. 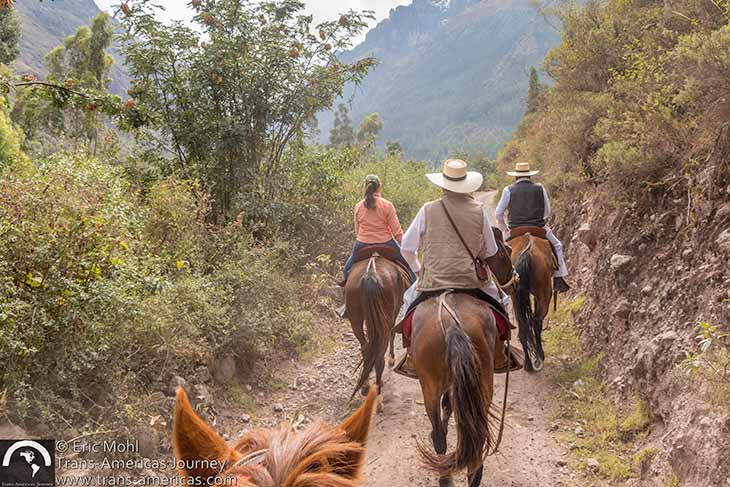 Riding through the Sacred Valley is a great way to slowly see the beauty of the place.

Ride past hand-tilled fields, visit creeks and waterfalls, and maybe even enjoy a picnic or a post-ride beer. Yessenia and Fernando are generous and knowledgable hosts and we highly recommend this enjoyable and authentic Sacred Valley experience.

Visit the Museo Inkariy museum (you can’t miss the giant stone sculpture out front) on the road that travels through the Sacred Valley to see elaborate dioramas that combine art and archaeology to depict some of Peru’s most famous pre-Columbian archaeological sites and ancient cultures including Nazca, Paracas, and Chavin. It’s a striking (if a bit kitschy) reminder of the cultures that came before the Inca.

Parque de la Papa (Potato Park) opened near the town of Pisac in February of 2016 as an ode to the thousands of species of potato in Peru including demonstrations about planting, growing, and harvesting this essential tuber that originated in Peru. Quechua families run the place as a celebration of the potato (you’ll see different types of potatoes in different shapes, sizes, and colors) and as a community eco-project dedicated to maintaining traditional farming techniques and adapting as climate change makes farming more difficult. If you want to visit Parque de la Papa, make a reservation using this email address [email protected].