Guanajuato, Mexico is beloved by Mexicans, travelers, and the thousands of students who give this history-and-culture-filled city so much energy that brings the city’s museums, plazas, churches, and “Kissing Street” alive. It’s all in our Guanajuato travel guide. 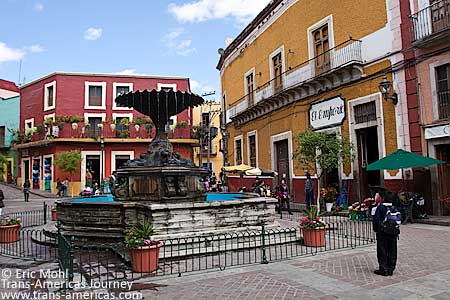 One of the many fountains in Guanajuato.

Get your bearings in Guanajuato, Mexico

Built in a depression between dramatic mountains, Guanajuato is a maze of steep, narrow streets. All traffic heading east to west use an underground tunnel constructed in the dry remains of what used to be a river. We won’t lie: this city is a bit of a driving nightmare, but it’s worth it.

The city revolves around a densely-packed central area which is full of intact architecture from the 1600s and 1700s and was declared a UNESCO World Heritage site in 1988. Quiet squares, plenty of pedestrian streets, and sidewalk cafes give Guanajuato the look and feel like a European city. More than 20,000 Mexican students attend the Universidad Guanajuato and they mingle with students from around the world, giving the historic city plenty of modern energy.

Because Guanajuato is built among the hills, some of the town has sprawled upward onto the hillsides which means many neighborhoods require quite a hike up narrow, alleys just to get to and from your house. 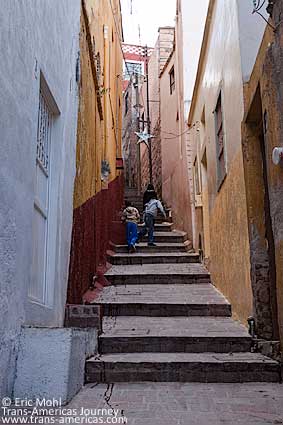 In hilly Guanajuato the only access to most homes is via stairways up steep alleys.

What to do in Guanajuato, Mexico

High on our list of things to do in Guanajuato was the Museo-Casa Diego Rivera. Located in the artist’s childhood home, the museum features some lovely, in-tact, living rooms and bedrooms plus a series of galleries on the upper floors of the building. We’ve seen a lot of Diego Rivera‘s work in various museums and in murals on public buildings across Mexico, but his early work collected here was completely different.

Here you can see Rivera’s sketches of traditional Mexican landscapes and even his attempts at Cubism. If not for the signature at the bottom most of us would never peg the stuff as Rivera’s. It’s a bargain at 20 pesos (about US$1.15) per person. 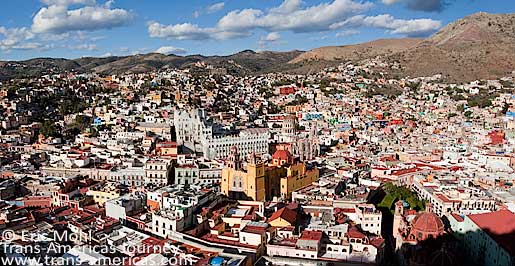 This panorama of Central Guanajuato was taken from the Monumento a Pipila high above the city. (click image for larger panorama)

We also worked our way up a series of steep alleys to reach the Monumento de Pipila above town. Built to honor a local hero of the War of Independence, Monumento de Pipila is also a great place to enjoy sunset over the colors and the many church domes of Guanajuato.

One of Guanajuato’s most famous sites is Callejon del Beso (aka,The Kissing Street). This alleyway is so narrow that the second floor balconies of houses across the street from each other practically touch. On these balconies a kind of Mexican Romeo and Juliet doomed love story played out and the street has become a must-smooch destination in the city.

Never mind that an anti-obscenity ad campaign in the city in 2009 momentarily gave the impression that kissing in public was forbidden. That is until Guanajuato’s mayor stepped in and proclaimed his city to be the “kissing capital.” 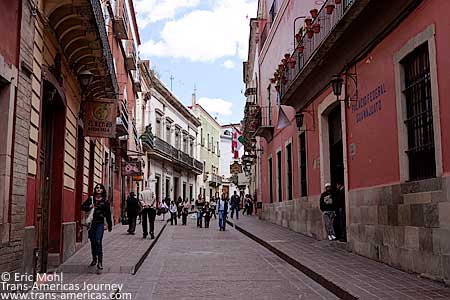 The trees in the plaza in front of the striking Teatro Juarez are some of the densest, lowest, and best trimmed we’ve seen yet in any square in Mexico. The branches have literally grown together making a solid square around the plaza, like a tidy, green picture frame. This is lovely to look at or sit under but it makes it hard to get a good shot of the theater.

Groups of singers and musicians gather around this square at dusk and start taking requests (and pesos) for surprise serenades they’ll slyly deliver to unsuspecting wives and girlfriends later that night. 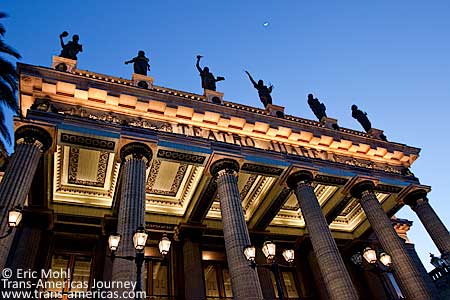 The beautiful Teatro Juarez with a sliver of a moon rising.

The wide, inviting steps leading up to the opulent Teatro Juarez are a kind of impromptu meeting place for students in Guanajuato. The theater is gorgeous, but we wish they didn’t charge so much to enter (35 pesos, about US$2 per person plus another 40 pesos, about US$2.25, for a camera) just to go inside and look around.

Templo de San Francisco, one of many historic churches to visit in Guanajuato.

Where to eat in Guanajuato, Mexico

The rotisserie chicken at Restaurante La Carreta was addictive. 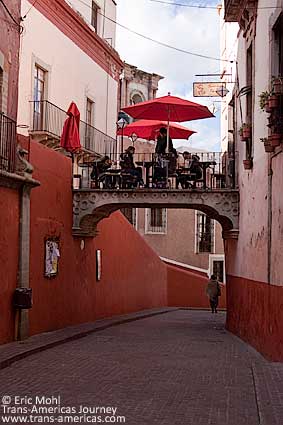 This cafe makes good use of a bridge connecting two buildings in Guanajuato.

Where to sleep in Guanajuato, Mexico

With so many students around there’s a broad range of places to stay in Guanajuato, including plenty of hostels.

We stayed at the Hotel Villa Maria Cristina. The hotel, a converted and expanded mansion, is located slightly out of the fray of downtown Guanajuato in an area called Paseo de la Presa and we enjoyed being in a neighborhood within a 15-minute walk of the center. We also enjoyed the hotel’s pool, hot tubs (indoor and outdoor), sauna, and steam room–amenities not commonly found in city hotels.