An accidental run in with Mexico’s annual monarch butterfly migration near Valle de Bravo brought us face to face with millions of these threatened beauties in groups so large they make noise, weigh down tree branches, and even have a smell. 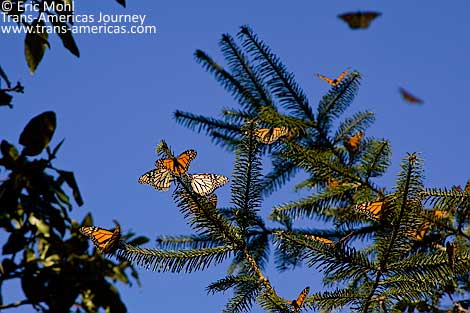 Monarch butterflies warming up in the Mexican sun after a long, long migration from the US and Canada.

We were driving along Highway 134 from Mexico City toward Valle de Bravo just minding our own damn business. Our first hint that something was in the air came when Mexican police cars suddenly veered into traffic and slowed all cars to a crawl. 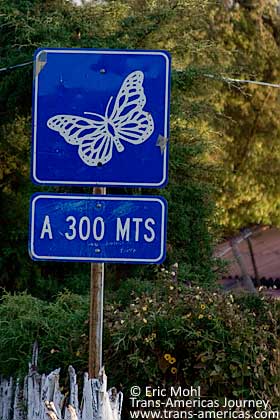 One of the more exciting road signs in Mexico.

As a growing convoy of frustrated drivers crept around a corner the reason for the hold-up came into view: swarms of monarchs flying down the road in a slow-motion river of gold and black. These “butterfly cops” (as we dubbed them) were there to ensure that moving vehicles didn’t hit too many butterflies—or each other—in the winged confusion. 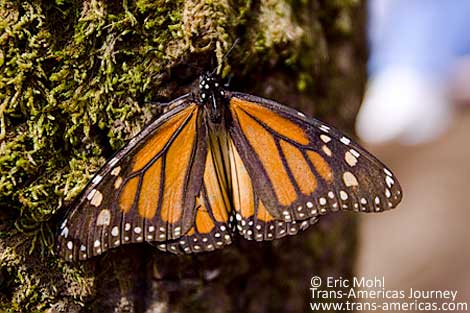 This monarch, and millions of others just like it, fly thousands of miles from the US and Canada to Mexico every year.

Most drivers kept going but we pulled over into the first turnout we saw along the highway. Soon we were hiking up a steep, dusty trail into the forest behind a handful of Mexican visitors in pursuit of what we could only hope was the home roost of the monarchs we’d just seen along the road. 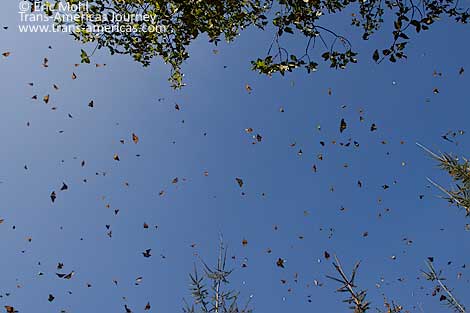 What looks like gently falling confetti is actually swarms of flitting butterflies.

The mystery of the monarchs in Mexico

Every year, between November and March, hundreds of millions of monarch butterflies somehow navigate their way to the exact same areas of Central Mexico, some flying 5,000 miles (8,000 km) or more from where they were born in Canada and the northern US. Scientists say they’re drawn to Mexico’s fir trees, but can’t provide a more complete explanation than that. Once the butterflies arrive, they rest and eat, then mate like crazy before attempting the return flight home. Most never make it.

It’s one of the most puzzling, fragile and mind-boggling migration mysteries on the planet and it gives those lucky enough to visit Mexico’s dozen or so protected monarch butterfly migration grounds the unique opportunity to see millions of butterflies in one place. There are so many of the orange and black beauties that the air is alive with the sound of their wings. Tree branches bend to the ground under their collective weight. They even begin to give off a not-so-beautiful smell, not to mention their aforementioned ability to stop traffic. 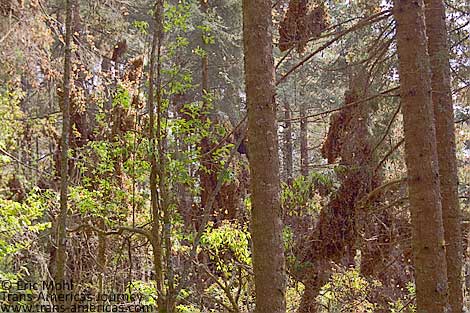 Thousands of butterflies rest in their beloved fir trees, cumulatively weighing enough to bend the branches down as if they were covered in snow.

How to see the monarch migration in Mexico

Some of Mexico’s better known butterfly havens, like El Rosario, are becoming less of a haven as the hiking boots (and the horse hooves of those who take for the lazy way up) of thousands of visitors churn up the hiking trails into dust bowls and encourage hillside erosion and fir tree loss. That many humans also create noise and movement that stresses the colony.

But thanks to the Mexican police force, we’d stumbled upon the Piedra Herrada site which is roughly 15 miles (25 km) outside Valle de Bravo. This newly opened viewing area is one of a handful of migration locations in Central Mexico which attract one third of the world’s monarch butterfly population every year. 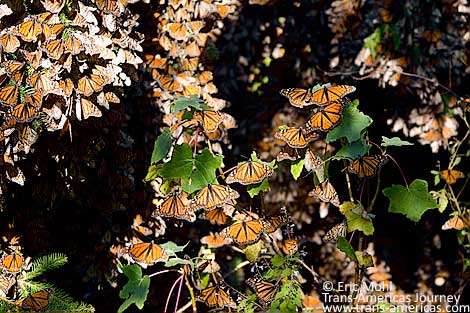 Millions of monarch butterflies fly thousands of miles to reach feeding and mating grounds in Mexico every year.

The hike was steep (prompting some potty-mouthed grumbling from a woman dressed for brunch, not for hiking) and the weather was hot. Some visitors opted to ride up on one of the handful of petite horses-for-hire, a proposition that looked even more uncomfortable than walking.

At the end of a 1,100 foot (335 meter) climb into the mountains there were still no butterflies in sight but we plodded on, winding our way up through the thick forest and the thin air above 7,000 feet (2,100 meters) in elevation. 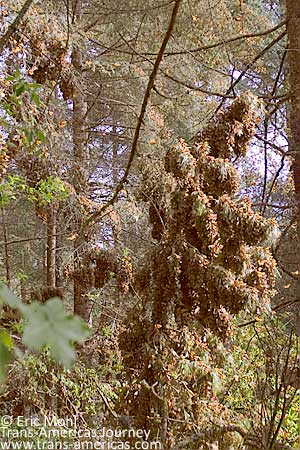 At the Piedra Herrada site, thousands of butterflies rest on the fir trees that they love, weighing down the branches like snow. Those dark clumps are all butterflies.

An hour later we were met by two uniformed local men, trained as official monarch butterfly monitors. They collected 23 pesos (about US$1.25) per person and admitted only a dozen or so people at a time into a roped off hillside viewing area roughly 50 feet (15 meters) from the pulsating colony.

We were all under strict orders to move slowly and talk quietly and we remained under the watchful eye of these monitors for as long as we were within the roped off area. It’s one of the few times we’ve felt grateful for being supervised as the monitors shhh’d and admonished with responsibility, care, and obvious respect for the butterflies.

Check out the mass of monarchs in our video, below. 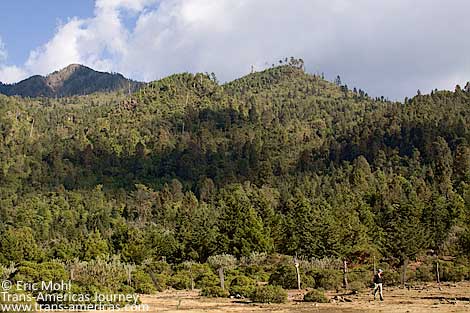 You’d never know that thousands of monarch butterflies were camped out less than half a mile up this hillside at Cerro Pellon in Mexico.

Encouraged by the good conditions and manageable crowd size at Piedra Herrada, we committed to finding an area even more pristine and private. And we succeeded.

The next monarch meeting place we visited was an area called Cerro Pellon outside a town called El Capulin which is about 25 miles (40 km) from Valle de Bravo. The trail here was less steep and a bit shorter than the route up to the Piedra Herrada sanctuary and our obligatory local guide allowed us to stand within 20 feet (6 meters) of the butterflies. 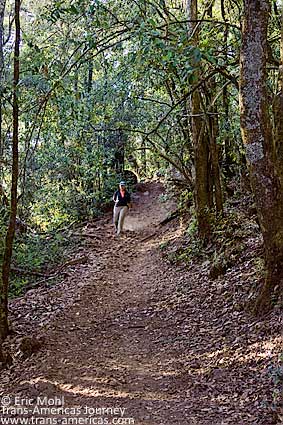 Karen on the trail to see the monarchs at Cerro Pellon.

There were so many butterflies that their collective mass weighed down tree branches. We could hear their wing beats in the air. And there was actually a butterfly smell. The best part, however, was that we were there along with just five other people (three of which were guides). 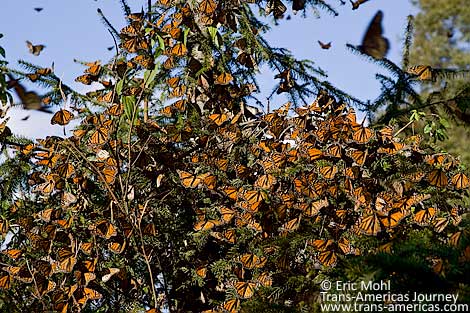 Thousands of monarch butterflies but only five humans at Cerro Pellon in Mexico.

Major threats to the monarchs

It’s true that the future of Mexico’s monarchs is far from certain. Loss of habitat through persistent illegal logging, insufficient funding for the 124,000 acre (50,000 hectare) Monarca Biosphere Reserve which straddles two states and encompasses most of the migration points, and over-visitation threatens the butterflies.

To address some of those issues, Mexican President Felipe Calderon pledged to add $4.6 million to the $36.4 million annual budget for the Biosphere Reserve (which is a UNESCO World Heritage site). However, illegal logging (it’s a felony) and even clear cutting within protected monarch habitat is an ongoing problem as a quick Google Maps overview of some areas brings into stark relief. 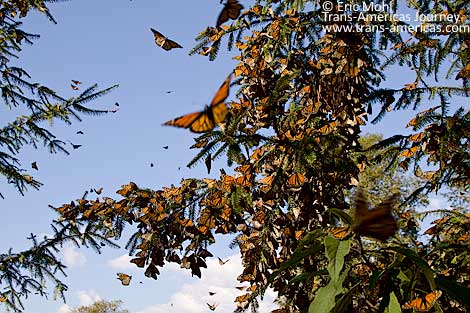 Our advice? Get yourself to Valle de Bravo, part of Mexico’s elite Pueblos Magicos program, in time for next year’s migration. And note that later in the monarch season (late February and early March) warmer temperatures lure the butterflies lower down the hillsides shaving distance off your hike up to reach them.