In areas of the Patagonia region in southern Argentina you can hardly scratch the surface of the earth without uncovering a dinosaur bone. Okay, that’s an exaggeration. But this region has yielded amazingly intact remains of dinosaurs that lived hundreds of millions of years ago and new finds are being made all the time, including a couple of massive discoveries in just the past few months. Here are some of the best ways to see the dinosaurs of Patagonia for yourself. 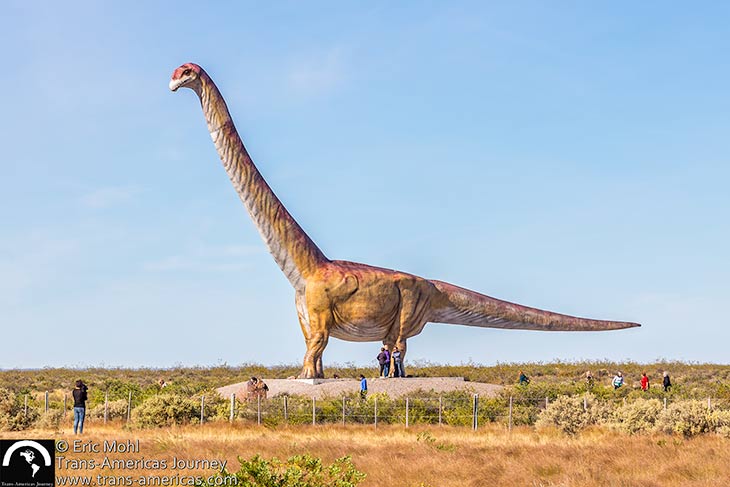 Talk about a roadside attraction…This life-size Patagotitan mayorum dinosaur is on the side of the highway between Puerto Madryn and the city of Trelew.

Up close with the dinosaurs of Patagonia

MEF Museo Paleontológico Edigio Feruglio in the city of Trelew in Chubut Province in the Patagonia region of Argentina is a scientific research center run by the Argentinean government. The associated museum displays some original bones and amazing ammonites along with many reproductions of dinosaur bones and skeletons. You can even peek into the workshop/lab where experts create these reproductions. 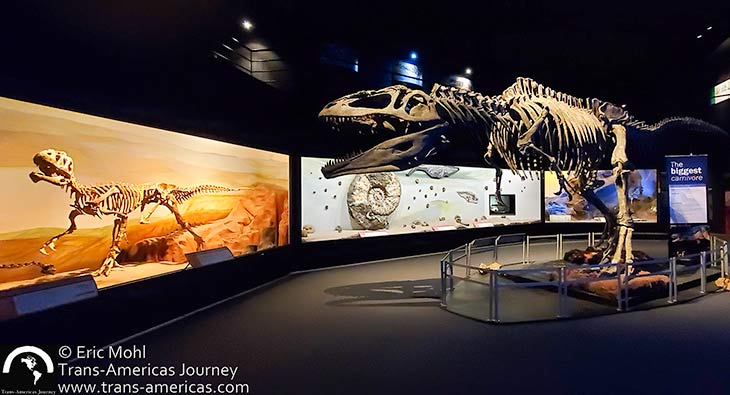 The museum is named for Edigio Feruglio who was an Italian geologist who came to Patagonia in the 1930s to work in oil exploration but also used his time in the field to produce detailed maps of Patagonia and detailed records of fossils he found throughout the region. However, the stars of the museum are its three carnivorous giants: a Carnotaurus Sastrei, a Piatnitskysaurus flowers, and a Tyrannotitan chubutensis which is a T-rex looking thing that is displayed dramatically in the middle of the museum. 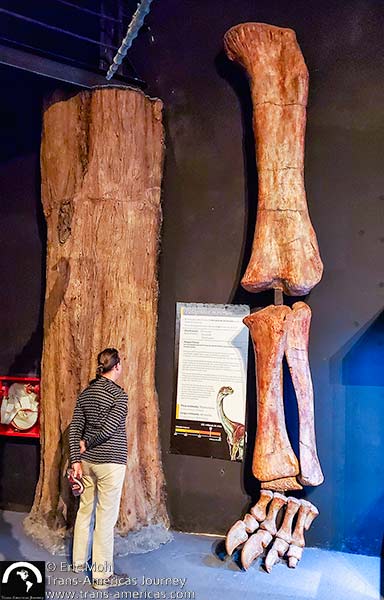 Karen in front of a replica of just part of the let of the massive Patagotitan mayorum in the MEF Museo Paleontológico Edigio Fergulio in Trelew.

Many of the displays at this museum have signs in English as well as Spanish and at 11 am they begin showings of a 40-minute film narrated by David Attenborough. When we were there, the museum was constructing a new wing to house the reconstructed replica skeleton of a Patagotitan mayorum dinosaur. At up to 140 feet (42 meters) long and up to 83 tons in weight, this may be the largest dinosaur in the world and it was, of course, found in Patagonia (a recreation of this giant is shown along the highway into Trelew in the first photo in this post). This creature’s actual bones are in the care of the Field Museum in Chicago. Entrance to the MEF Museo Paleontológico for foreign visitors is 350 ARS (about US$3.75). Allow at least 30 minutes to tour the museum plus time for the film.

Museo Municipal Carmen Funes, named for Doña Carmen Funes who is credited with founding the town of Plaza Huincul in Neuquén Province in the Patagonia region of Argentina, is a local history museum and home to breathtaking examples of local dinosaur finds. 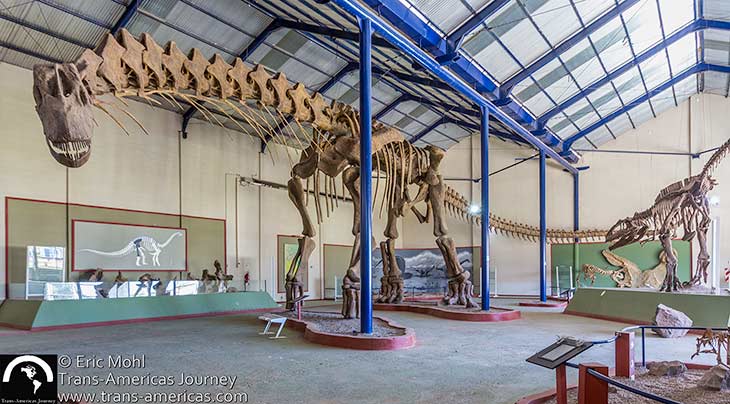 Just a few bones from this creature were discovered but experts were able to extrapolate the size, shape, and dimensions of this Argentinosaurus huinculensis so its skeleton could be recreated in the Museo Municipal Carmen Funes.

The dinosaurs here are housed in one large shed-like room and the centerpiece is the recreated skeleton of an Argentinosaurus huinculensis which is thought to be the largest herbivore dinosaur of them all and one of the largest creatures that ever walked on earth. In 1987 a local farmer discovered enormous bones on his land just a few miles from the museum. Paleontologists were then able to remove and study a handful of the creature’s bones and they used those bones to figure out just how big the creature might have been when it was alive. 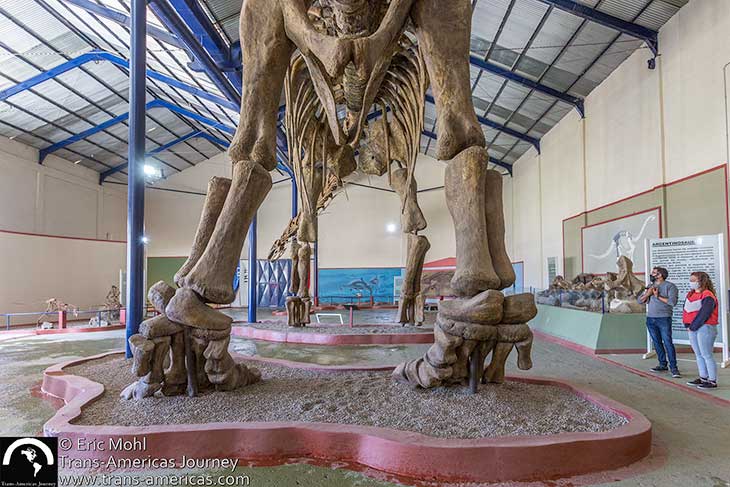 The Argentinosaurus huinculensis dinosaur was so big you could have driven a truck under its belly.

It’s estimated that Argentinosaurus huinculensis dinosaurs were 100 to 130 feet (30 to 40 meters) long and weighed 55 to 110 tons. We can tell you that the thing was so big that we could walk between its legs and under its belly without ducking.  Also on display is a Giganotosaurus carolinii, one of the largest carnivorous dinosaurs that ever lived and a rival to the mighty T-Rex. 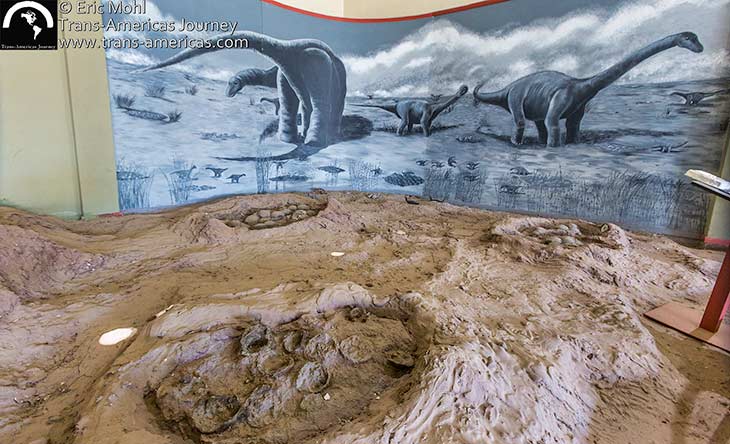 A fossilized nest of dinosaur eggs in the Museo Carmen Funes.

This museum also displays a few other types of dinosaurs including a very large marine creature and they’ve also discovered and preserved evidence of dinosaur nests with eggs, which are fascinating. And don’t miss the map on the wall which marks the many, many finds in the area to get a sense of just how dino rich this place is. Entrance to the museum for foreign visitors is 275 ARS (US$3). Allow 30 minutes to tour the musuem.

Just a few miles from Plaza Huincul is the town of Cutral Co. There’s no dinosaur museum there, but they do have a fun place called Sala de Dioramas which includes 13 detailed dioramas created by Argentinean artist Oscar Campos who was born in Cutral Co. 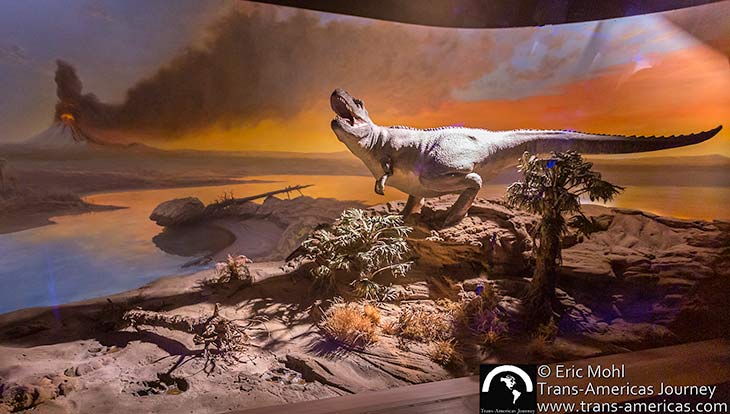 The dinosaurs of Patagonia are also memorialized in some of the detailed dioramas in the Sala de Dioramas in the town of Cutral Co.

Created in large niches in the walls of a darkened horseshoe-shaped room, the dioramas, which include music and narration in Spanish, depict everything from dinosaurs in the area to a local political uprising, to iconic Patagonian landscapes. Allow at least 30 minutes. 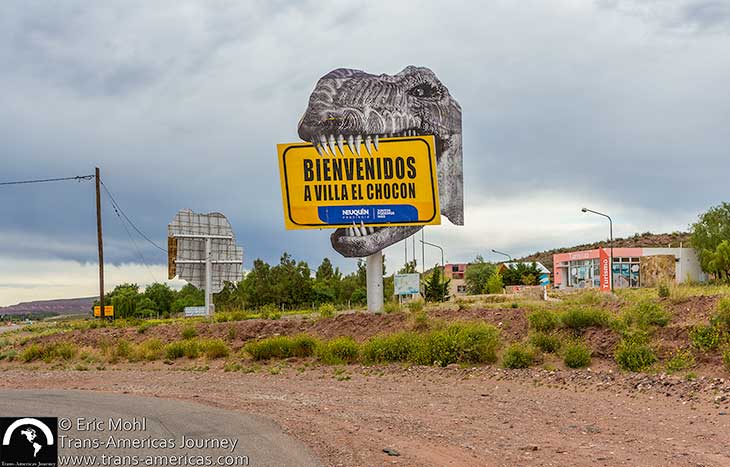 To reach Museo Paleontológico Ernesto Bachmann, in the town of Villa el Chacón in Neuquén Province in the Patagonia region of Argentina, just follow the dinosaur prints painted on the streets leading to it. The fun continues inside with many rooms and many, many dinosaurs. 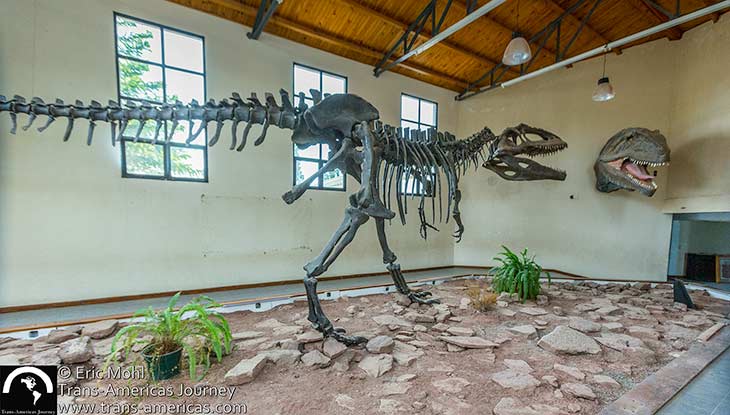 This Gigantosaurus carolinii is just one of the many dinosaurs in the Museo Paleontológico Ernesto Bachmann.

We’ve seen plenty of dinosaur skeletons recreated with replica bones put together based on information gleaned from the discovery of just a few of the creature’s actual bones. At Museo Paleontológico Ernesto Bachmann it was a thrill to see a dinosaur reconstructed with 80% of the animal’s original bones. And what an animal. 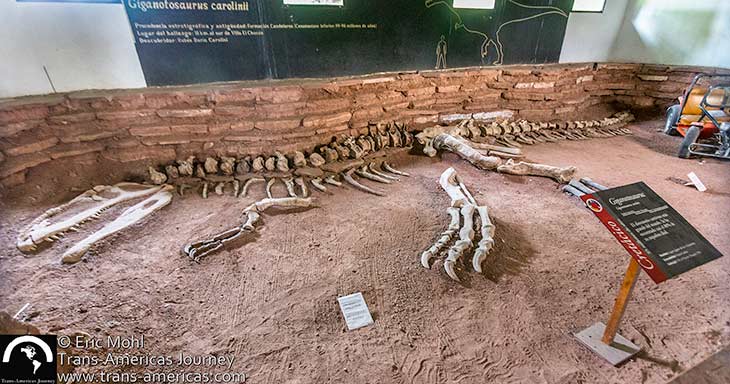 Experts discovered 80% of the skeleton of this Gigantosaurus carolinii.

In 1993, a local stumbled upon enormous bones about 11 miles (18 km) from the museum. Over the next three years, the site was fully excavated and ultimately yielded 80% of the bones of a Giganitasurus carolinii dinosaur, said to be the largest carnivorous dinosaur that ever lived. The creature, which is shown embedded in the earth and reconstructed in a standing position, was 45 feet (14 meters) long and weighed eight tons. That’s bigger than T-Rex. This remarkably intact find prompted the formation of the museum which is named after a local paleontologist. 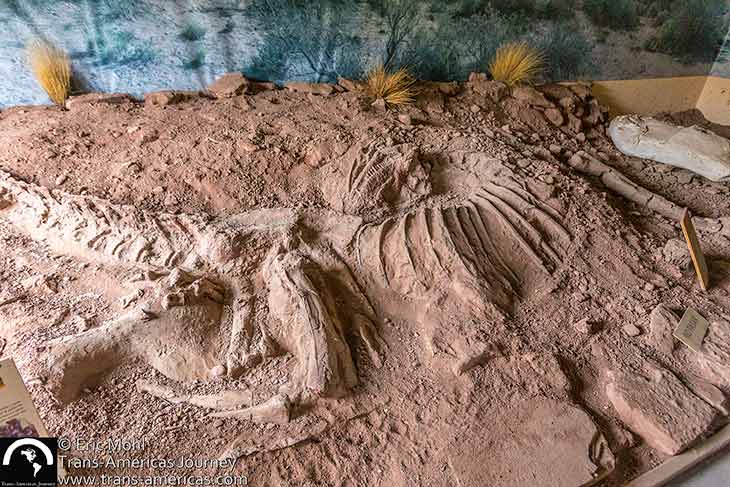 This exhibit depicts the bones of a Skorpiovanator in exactly the position they were found in.

Another unusual and thrilling highlight of this museum is the exhibit with replica bones of a Skorpiovanator that was also found nearly intact. The bones are displayed in a recreation of the exact position they were found in when experts discovered them embedded in earth and rock. Looking down at the creature in situ like that does impart a bit of the thrill paleontologists must feel when they unearth something like this.

Bonus for families: this museum also has an interactive “dig” area where staff members have buried dinosaur bone replicas in a sandy area where kids can use trowels and paintbrushes to dig and search for them. Allow at least 45 minutes to tour the whole museum. 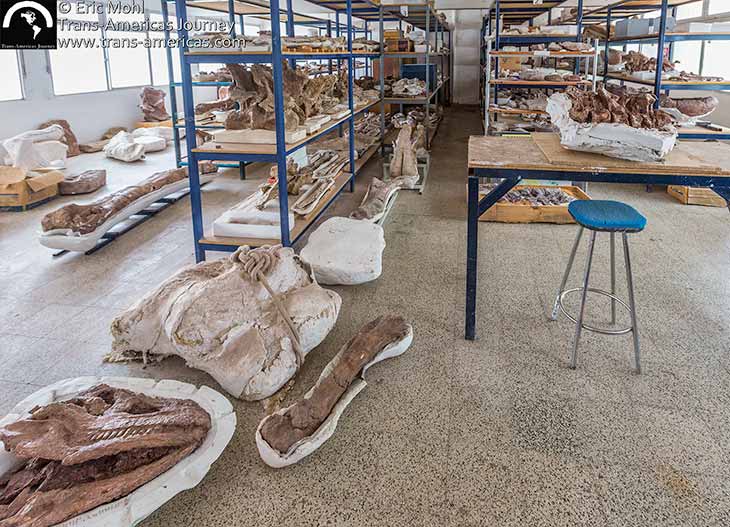 The small lab and warehouse for the Museo Paleontológico Ernesto Bachmann is bursting at the seams.

Maria, the museum’s director and a native of Villa del Chacón, is not formally trained but she is very knowledgeable and so passionate about paleontology that, after taking us on a tour of the museum, she offered to show us around the museum’s nearby lab/workshop/warehouse which is bursting with amazing finds including the original bones of the Skorpiovanator replica we saw in the museum, huge teeth, entire skulls, and so much more all lined up and labeled on a series of metal shelves and on the floor. 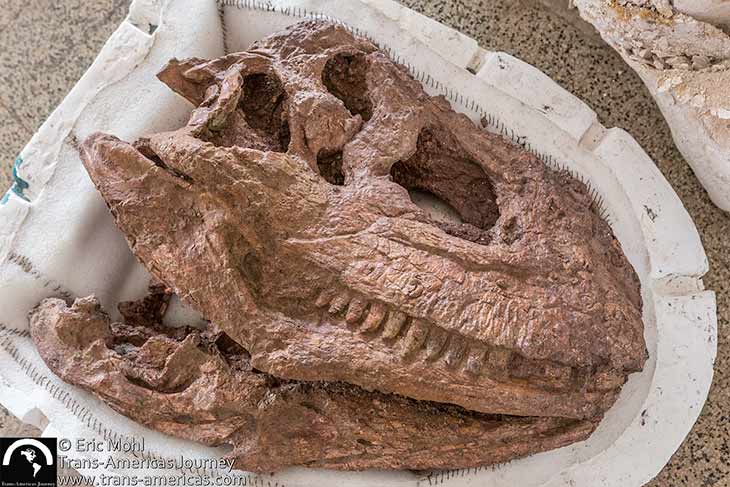 Like everything else in the museum’s lab and warehouse, this dinosaur skull is a real fossil, not a replica.

It was thrilling to be surrounded by real dinosaur bones, and not the replicas or copies that are most often on display to the public, that we were able to touch and closely examine. 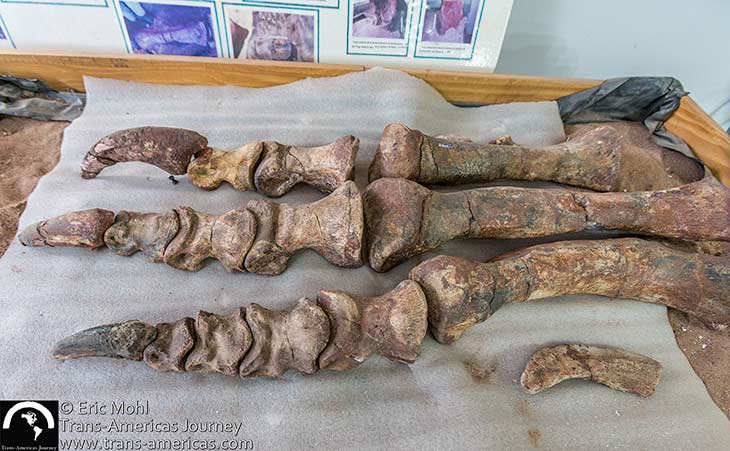 Maria has trained a small team of workers in techniques used to carefully extract bones out of the rocks and other materials they’re often embedded in and she says the museum and lab get no federal funding. They get by on donations of money and tools and the support of the local municipality. 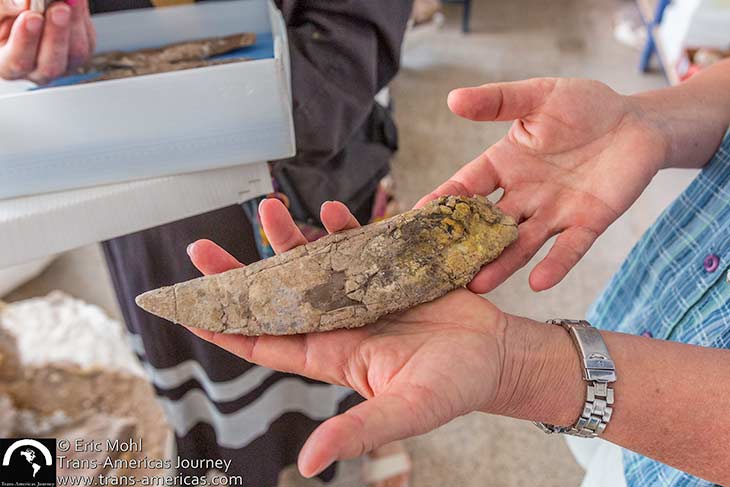 Not far from Villa el Chacon is a collection of footprints left by adult and juvenile dinosaurs which were found on the shore around part of the Ezequiel Ramos Mexía reservoir.

Footprints of adult and juvenile dinosaurs near the Ezequiel Ramos Mexía reservoir are easily seen, even when they’re full of dust and in need of careful cleaning as they were when we visited.

An elevated walkway has been built over the prints which can clearly be seen. A local also told us that you can hike into nearby Escondido Canyon where more dinosaur footprints can be seen.

In Patagonia, dino bones are so common that you might even find some when you’re building your new winery. Construction of the Familia Schroeder winery in San Patricio del Chañar in Neuquén Province was stopped for two months after dinosaur bones were found during excavation work. 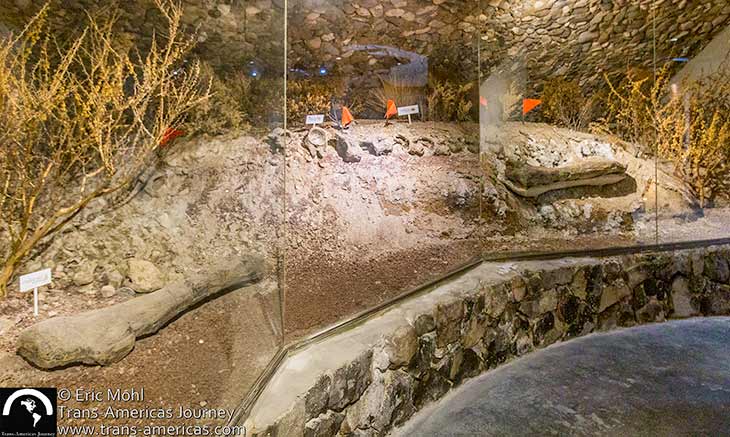 Dinosaur bones were discovered during the construction of the Bodega Familia Schroeder winery and a replica of the find is now part of their tour.

Paleontologists came in and excavated the area, removing their finds to a museum. A replica of how the bones of the creature, named Pan American Schroeder, were found is now part of the winery tour at Bodega Familia Schroeder and they produce an entire line of wine called Saurus in honor of the creature.

One that got away

Near the Ezequiel Ramos Mexía reservoir, about 55 miles (90 km) from the city of Neuquén is Proyecto Dino where paleontologists lead guided tours of actual dig sites and their onsite museum and lab (US$13 per person). They also offer a unique “be a paleontologist” program which allows visitors to spend a few days at the facility working alongside the experts. Unfortunately, when we were there Proyecto Dino had suspended all public visits because of the Covid-19 pandemic. The director told us that they hope to fully re-open as soon as it’s safe.

In January of 2021, paleontologists in a remote part of Neuquén Province announced that they’d found 98 million-year-old remains of what seems to be the biggest example of a titanosaur which is the largest type of dinosaur. If true, it would make this herbivore the largest known animal to ever walk the earth. You will notice a lot of claims about individual dinosaurs being the “biggest” ever. That’s because size estimation is partly guesswork and also because new finds are being made all the time and each one may reveal an even larger animal.

In March of 2021, paleontologists announced the discovery of the remains of a new genus of the furileusaurian species of dinosaur. To the surprise of no one, this find was also made in Neuquén Province in the Patagonia region of Argentina.