Four Passes in One Day – Eldora to Gunnison, Colorado

If we had more time on our hands we’re sure we would have found even more to love about the Eldora area, however, it was time to go to Gunnison. But these are the Colorado Rockies and to get from Eldora to Gunnison we had to drive over four passes. 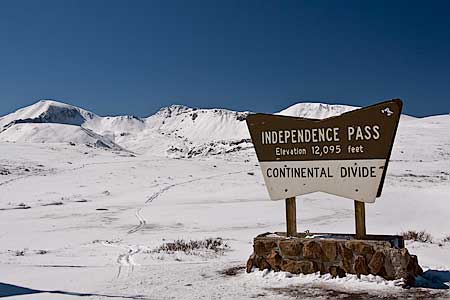 Out of Eldora we headed back the way we came over Independence Pass, along the second highest paved road in Colorado, for the second time in as many weeks. When we drove over this 12,095 foot (3,686 meter) monster a week earlier we did it in a snow storm. This time the skies were crystal clear but the snow was already piling up.

At the very top of the pass we saw a Mennonite family as we all walked through the snow to a lookout point. We’ve bumped into tons of Mennonite travelers during our Trans-Americas Journey and we are extremely impressed with their peripatetic nature. Though, we admit, it puzzles us. If anyone can explain why Mennonites seem second only to Australians in the “We live to travel” sweepstakes, please fill us in.

Safely over Independence Pass we arrived in Aspen where the clear skies were holding steady so we took the opportunity to finally get to the Maroon Bells, an area of strangely maroon colored rocks and peaks just outside Aspen. All previous attempts to drive into the formations, which are part of the White River National Forest, had been thwarted by cloudy grey weather but our patience paid off on this visit with bright sun and an impressive accumulation of snow on the striated peaks. 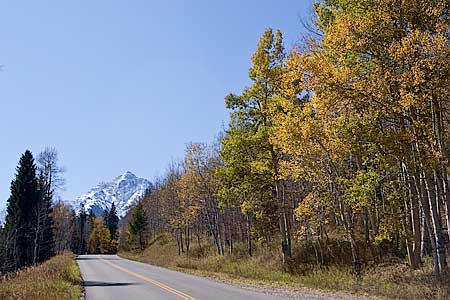 A short and scenic drive outside Aspen took us to Pyramid Peak and the  Maroon Bells in the last of the fall colors. 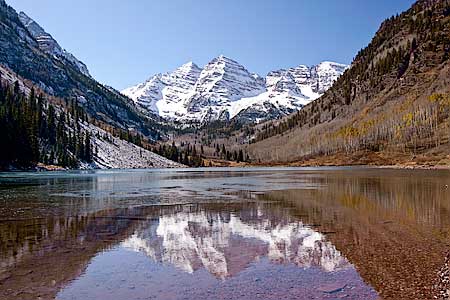 We started the day in blustery 20 degree weather in Eldora but a few hours later and a few thousand feet lower the temperatures were balmy enough to put our lunch of leftover garlic mashed potatoes and chili on the dash board and let the sun warm it up as we drove. It looks silly but it’s highly effective. 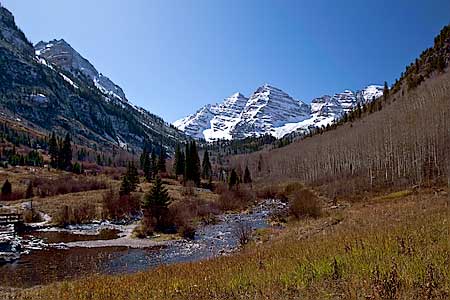 The Maroon Bells with a bit of Pyramid Peak visible on the left.

Up and over the final pass

After a short hike and a quick lunch under the Maroon Bells it was off to our final pass of the day and it was a doozie. Part of the West Elk Loop (that also takes in some amazing wine and food regions in Colorado), Kebler Pass is a relatively gentle incline along a very well maintained dirt road. What’s remarkable is the sheer number of aspen trees on the hillsides. Though they were, unfortunately, past peak color they still made a spectacular sight virtually as far as the eye could see. 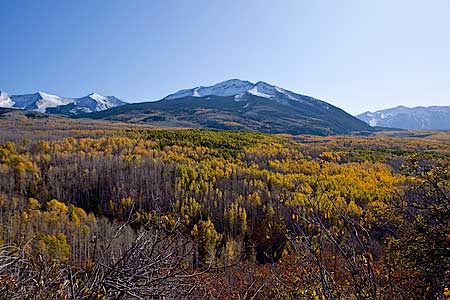 Going over Kebler Pass, a dirt-road shortcut between Hwy 133 and Crested Butte, we saw the largest groves of aspens we’ve ever seen.

Sleeping and eating in Gunnison

Kebler Pass deposited us in the charming town of Crested Butte and from there we carried on to Gunnison where we checked into an outstanding example of a strip motel brought lovingly back to life.

The Long Holiday Motel has a quirky vintage sign and claims that rooms have been “recently renovated”–a phrase so vague and overused in the motel business that it’s come to mean nothing at all. Or worse. When we hear “recently renovated” our minds automatically translate that to “you won’t want to take your shoes off.”

However, the motel manager was offering us an unbeatable price so we took a look at a room, expecting something just shy of a Roach Motel. Imagine our delight when we were met with a truly recently renovated room, sparkling clean and smartly upgraded with wood floors, a roomy shower, and a new mattress with fresh pillows and crisp, unstained sheets.

Equally surprising was the meal we had that night at The Gunnisak in downtown Gunnison where a chef with real creativity and ambition fills locals up with well prepared classics like chicken fried steak, burgers (on homemade buns), homemade soup, and enormous fresh baked cookies that are famous for miles around. All worth the drive (and the passes).