Estancia Harberton was the first permanent homestead in Tierra del Fuego. Descendants of Thomas Bridges, who established the ranch near Ushuaia, Argentina in 1886, still own the place and you can travel there to see penguins, visit their impressive marine wildlife museum, experience plenty of living history, and even spend a night or two in one of the loveliest spots at the southern end of the Americas. 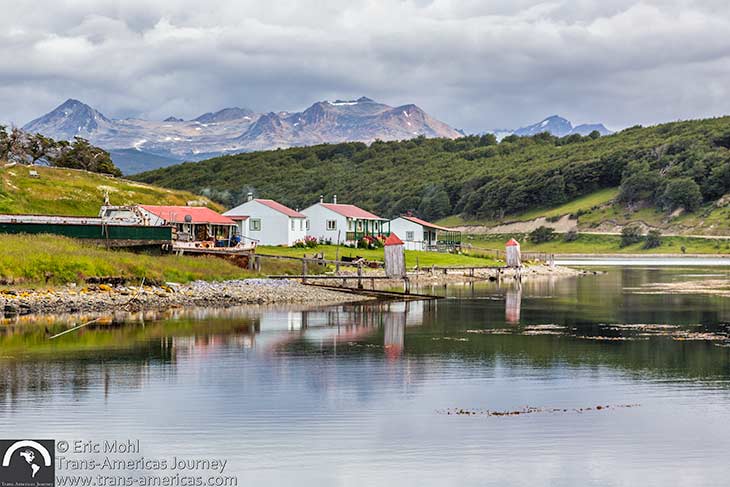 The bucolic setting of Estancia Harberton in a small bay off the Beagle Channel in the Tierra del Fuego region of Argentina.

The epic history of Estancia Harberton

Thomas Bridges was an orphan who was found on a bridge in England with his clothes marked with a T (hence his name). He was raised by a pastor and eventually became involved in Anglican missionary work with the Yámana people living on the Falkland Islands (called the Malvinas Islands by Argentineans). The teenaged Thomas started learning the language of the Yámana people and he ultimately published a dictionary that included more than 30,000 words in the language of the Yámana. 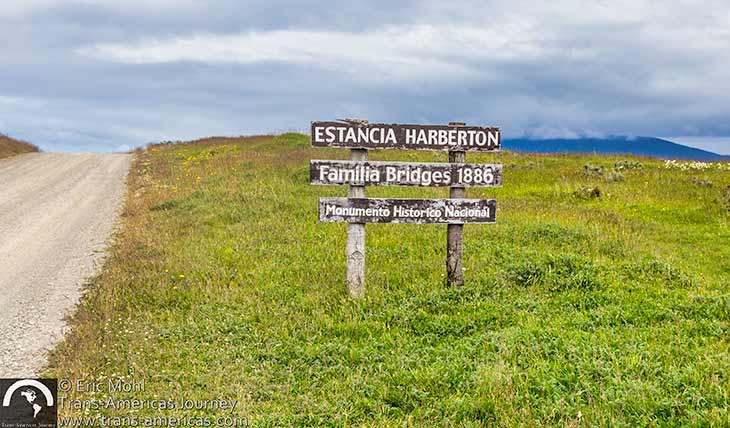 Settled in 1886, Estancia Harberton was the first European homestead in the region.

While back in England to become a full pastor, Thomas met and married Mary Ann Varder. Almost immediately, the couple returned to Tierra del Fuego where they continued missionary work with the Yámama and the Selk’nam people. 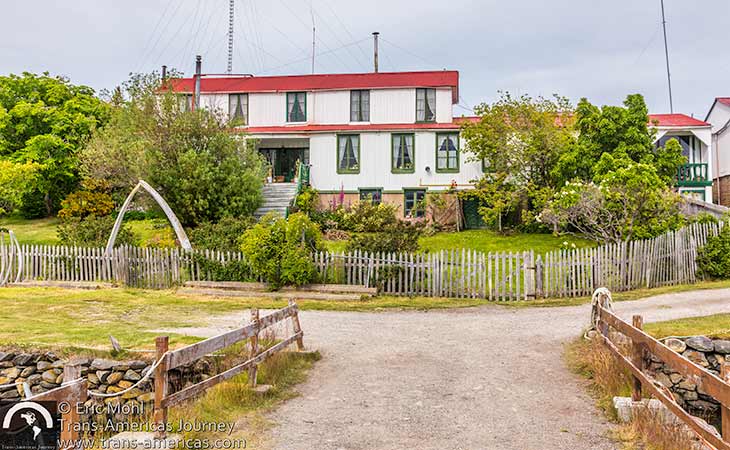 The Bridges’ original house was one of the first pre-fab homes ever built in the world.

When Thomas retired from missionary work, the Argentinean government gave him a parcel of land on the Beagle Channel. The Yámana, who had lived in the harsh environment for generations, advised Thomas about where to build his house for maximum protection from the wind and rain. Mary’s father then shipped a pre-fab house from England to Tierra del Fuego. When constructed in 1871, Estancia Harberton (named for Mary’s hometown) was the first estancia in Tierra del Fuego and one of the first pre-fab houses in the world. 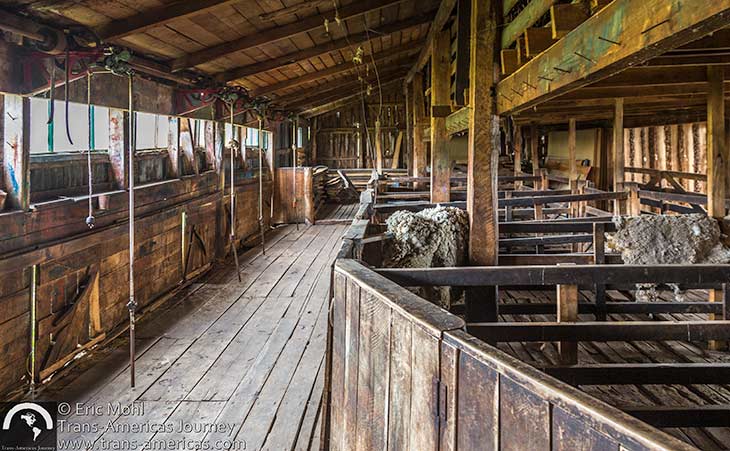 Estancia Harberton became a successful sheep ranch which thousands of animals that were sheared each year in this shearing shed.

Through hard work and perseverance, Estancia Harberton flourished as an enormous sheep farm and helped pave the way for future settlers in the region. The Bridges pioneering story reminded us of the Angermeyers who were early settlers of another remote and unpopulated region: the Galapagos Islands in Ecuador. 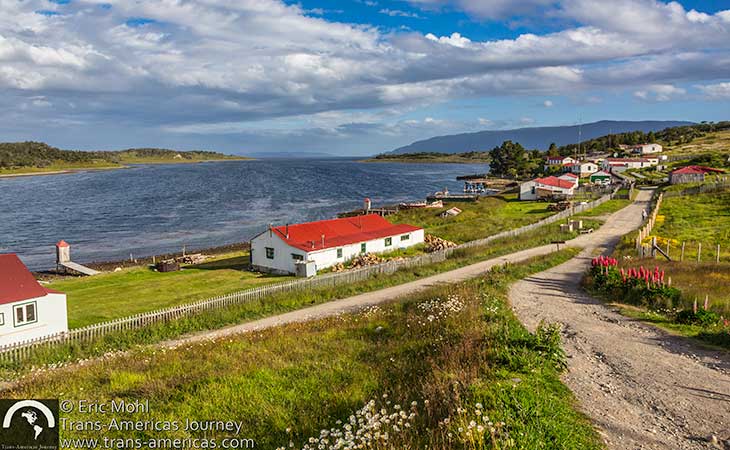 An overview of Estancia Harberton with the Beagle Channel and the open sea in the distance.

The Angermeyer story is well-chronicled in a book called My Father’s Island. The Bridges pioneering story was documented in a book called Uttermost Part of Earth written by Thomas and Mary’s son, Lucas, in 1947. An even better way to experience the history of Estancia Harberton, however, is to visit it yourself.

The year 1999 was a big one for Estancia Harberton. The last of the thousands of sheep that once lived on the ranch were gone, the property was made a National Historic Monument, and descendants of Thomas and Mary Bridges began to pivot to tourism. 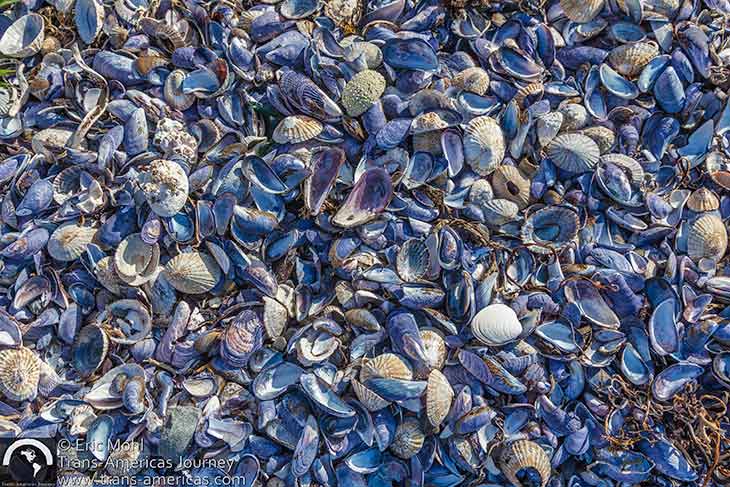 The bounty of the sea washes up on the rugged beaches around Estancia Harberton.

Today, Abby Goodall, a 5th generation descendant of Thomas Bridges, runs the place. Abby is a gregarious and unflappable woman who grew up at Estancia Harberton. She played with penguins and dolphins and wandered the coves and beaches (one of which she still calls Magical Shell Beach). She knows the plants (her mother, Natalie, was a botanist from the US), the animals, and the archaeological mounds on the land. 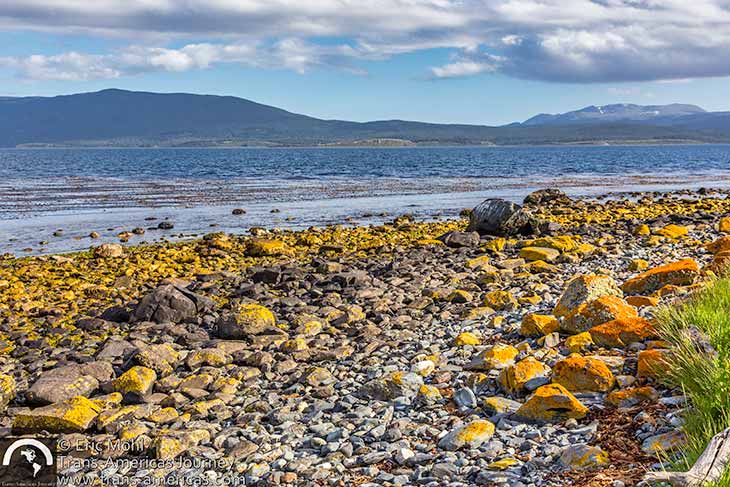 Growing up on Estancia Harberton meant wild nature like this was Abby Goodall’s playground.

At age 11, Abby made a detailed study of the growth of some steamer duck chicks she was trying to raise and, she says, her research, including meticulous measurements and notations and observations, was stolen and published by a scientist. Abby also once found a very sick condor and tried to nurse it back to health with raw meat and bottled blood (it ultimately died). These are the childhood memories you form when you grow up in Tierra del Fuego.

The first things you’re likely to notice when you arrive at Estancia Harberton are the massive stands of lupin. Purple, hot pink, yellow, and white blooms soar nearly three feet (1 meter) high. A gardener keeps it all blooming like mad along with a large and bountiful garden with strawberries, rhubarb, lettuce, and much more. 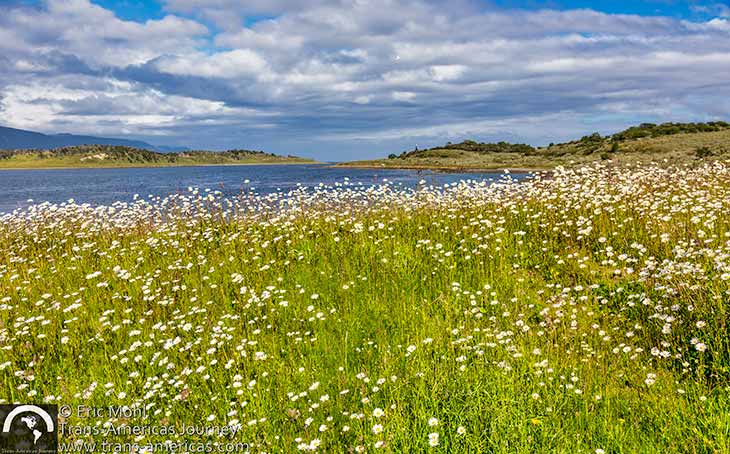 Flowers take over during the short spring and summer season in Tierra del Fuego.

The second thing you’ll notice is the stunning location on a peninsula and around a small protected bay. There are English-speaking guides at Estancia Harberton and they can take you on a peninsula walking tour which includes spots like “Grandma’s lookout” which is a slight rise where Mary Bridges would scan the horizon looking for Thomas’ ship. It is achingly romantic. The peninsula’s wild beaches and grasslands are also explored and, when we were there, a larger trail was being cleared with plans to add signage that will allow visitors to take a self-guided tour of the peninsula. 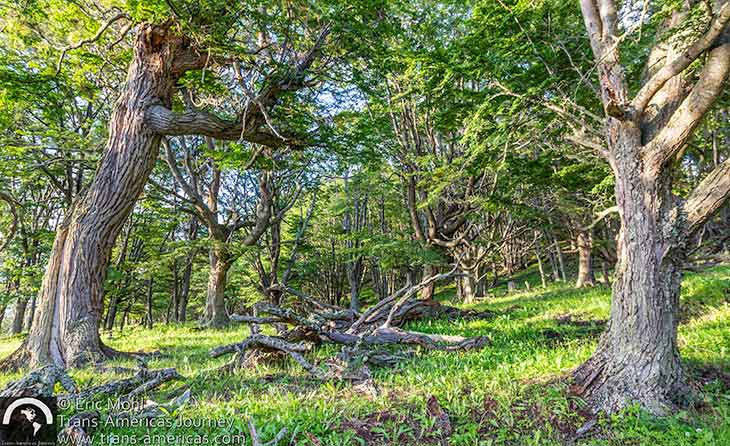 Nothofagus trees thrive in a wooded private nature reserve created on the ranch which was the first protected area of its kind in Tierra del Fuego.

A small wooded area was turned into a private nature reserve (the first one in Tierra del Fuego) and this is where you can see gnarly species of hardy local trees up close and visit the small family cemetery. 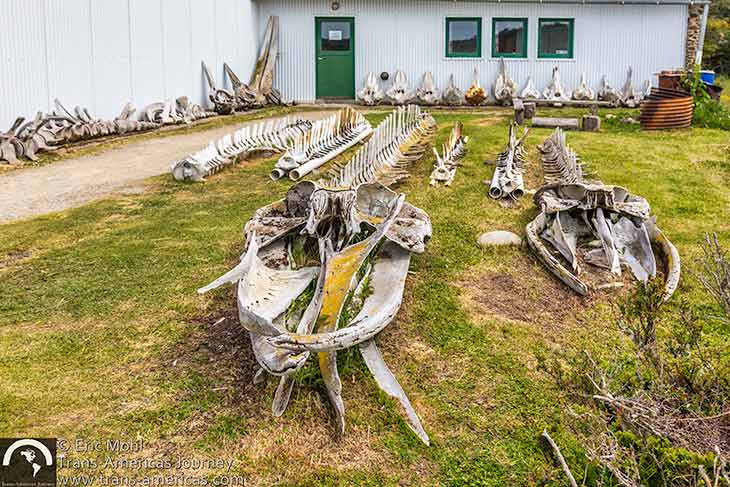 A few of the 3,000+ marine bird and marine mammal skeletons that have been collected, cleaned, and cataloged as part of the estancia’s museum.

Unexpectedly, Estancia Harberton is also home to the small but impressive Acatashun Bird and Marine Mammal Museum. Abby’s mother, Dr. Natalie Goodall, was a trained botanist from the US who developed an expertise in marine wildlife at Estancia Harberton where she spent years studying living animals and their bones and remains which routinely wash onshore. 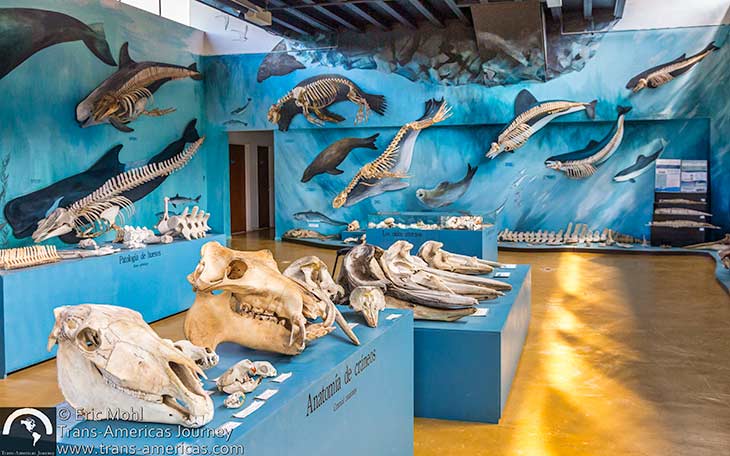 The building for the museum, which was named for the word for the bay in a local language, was donated. However, every bone, feather, tooth, and artifact displayed inside the museum was collected, cleaned, and cataloged by Natalie and, after her death, a small staff. English-language tours are offered and pieces are very nicely displayed with each species’ skeleton placed inside a painted outline of the intact animal’s overall shape to represent the whole being. 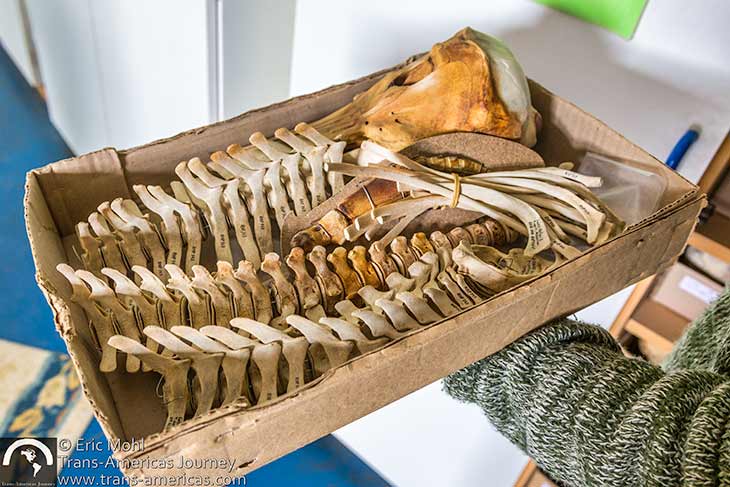 The Bone House doesn’t smell good, but it’s worth it for the chance to see how museum staff and volunteers work to reclaim and preserve skeletons.

More than 3,000 skeletons, many found on the coastline of the estancia, have been gathered and reconstructed here. Some bones from the estancia are on display in the Museum of the End of the World in Ushuaia and they still have enough to fill another museum. Don’t miss the chance to visit the nearby Bone House where staffers and volunteers continue to collect, clean, and re-assemble skeletons found on the estancia. It smells bad, but it’s fascinating. 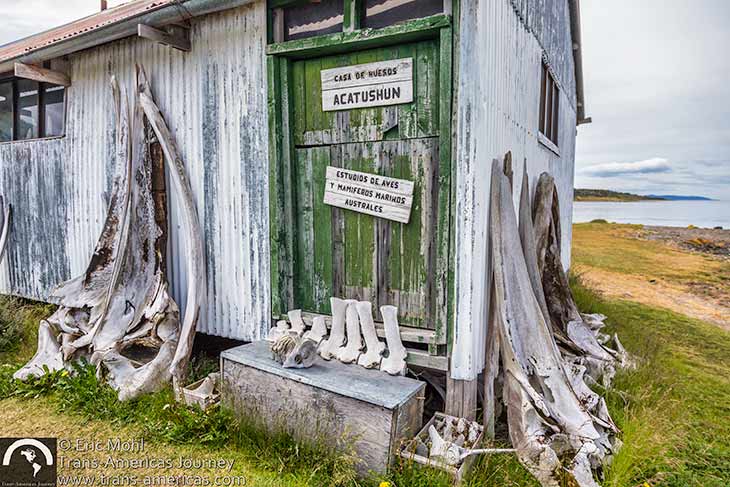 Welcome to the Bone House.

The Estancia Harberton property includes a nearby island where Magellanic penguin pairs come to nest each season. Travelers can visit the penguin colony with English-speaking guides and boats from the estancia, or as part of tours offered by companies in Ushuaia.

Fruits and vegetables from the bountiful garden are used to make fresh dishes in the estancia’s Manacatush Tea House and Acawaia Restaurant and even the menus have an element of history. The recipes used are mostly old family recipes with a few new twists thrown in. 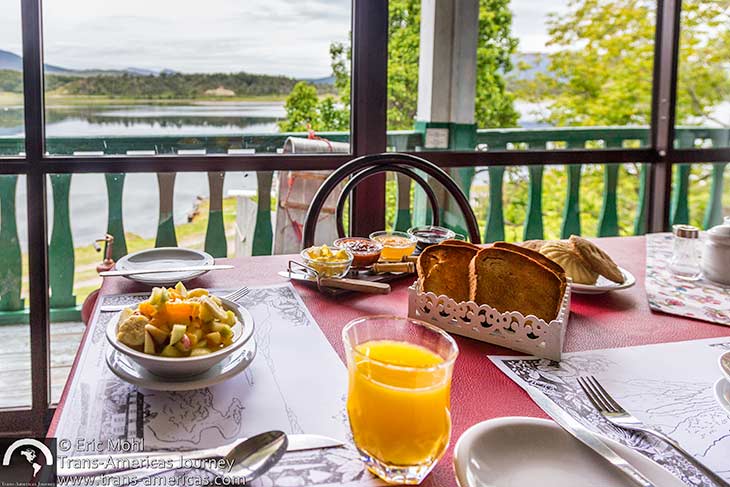 A full country breakfast, using many ingredients grown on the land, is included for overnight guests at Estancia Harberton.

For example, the recipe for hearty Harberton Soup was invented one evening when four catamarans docked at the estancia’s jetty because they were unable to return to Ushuaia due to extremely bad weather. After all the passengers ate up absolutely all of the baked goods offered in the tea house, Abby was faced with 40 very angry, very hungry people. So she started chopping up vegetables and anything else she could find in the kitchen to produce a steaming pot of soup. The next day, Harberton Soup was added to the menu and it’s now a top seller.

Another top seller is a cinnamon cake originally called Mistake Cake after Abby accidentally put way, way too much cinnamon in the batter. She baked it anyway and it was a hit.

The best way to appreciate Estancia Harberton is to stay for a night. This allows you to slowly explore the place, see the natural beauty at various times of the day, and have the place more or less to yourself after the day-trippers depart. 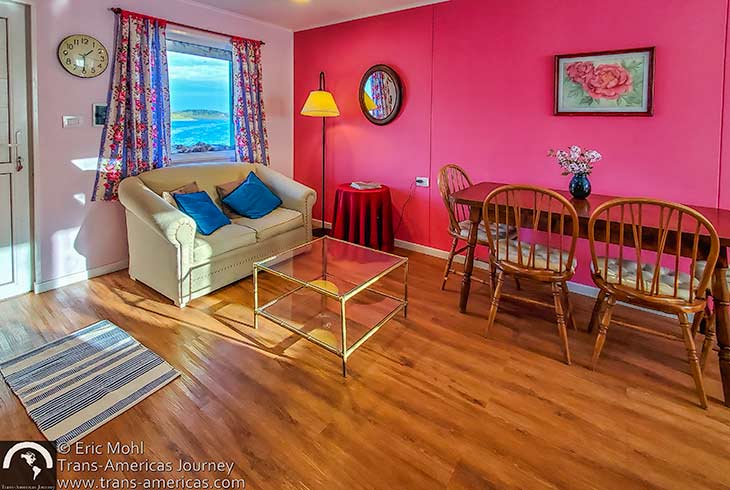 The living area of our two-bedroom cottage at Estancia Harberton.

Abby offers accommodation in a handful of traditional estancia style cottages (whitewashed wood, red tin roof, single level, ample porch) located right on the bay. Each has 2-3 bedrooms, wood floors, antiques, fluffy comforters, a deck (with views for days), a private kitchenette or access to a shared kitchen, a wood-burning stove, solar electricity, and pure rainwater. There are no TVs in the cottages and the Wi-Fi is spotty. Best to just unplug for a bit.

Overnight accommodation at Estancia Harberton can be booked as bed and breakfast, half board, full board, or all-inclusive. All options include tours on the property. The all-inclusive option also includes a trip to see the penguins.

How to get to Estancia Harberton

There was no road to Estancia Harberton until 1978, but you can now drive to the estancia which is 53 miles (85 km) from Ushuaia (allow 1.5 hours of drive time each way). Take paved Ruta 3 out of town, then turn onto Ruta J, which is a dirt road that passes a few cabins, shacks, and homes before the scenery transitions to open prairie and wooded hills. 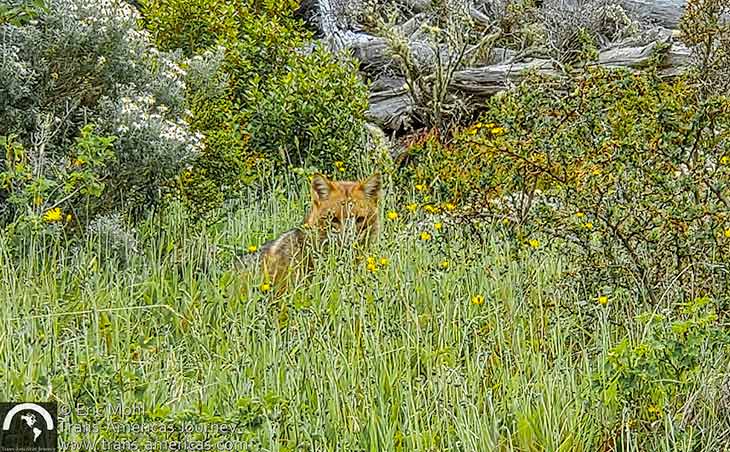 A red fox near Estancia Harberton.

At the fork in the road, stay left for Estancia Harberton. Or take the right-hand fork (like we did) for a side trip to the sleepy town of Puerto Almanza which has a few restaurants. Back on Ruta J, we continued past the turn off for Estancia Harberton because we wanted to reach the true southernmost point you can drive to in the world that’s connected to a national road grid. 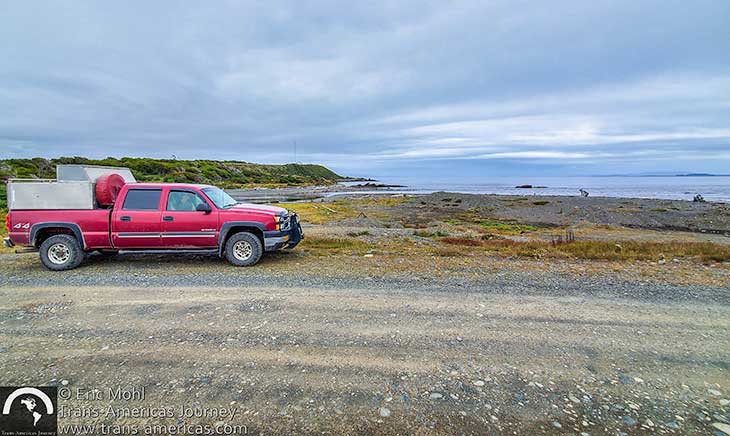 Our truck shortly after turning around at the southernmost point in the world that you can reach on a road connected to a highway.

To get there, we continued to the end of Ruta J, driving along the coast through the Moat Natural Reserve. There’s a military post at the end of the road where we turned around and doubled back to Estancia Harberton, seeing a red fox (zorro colorado) on the side of the road and a pod of small dolphins very close to the shore. 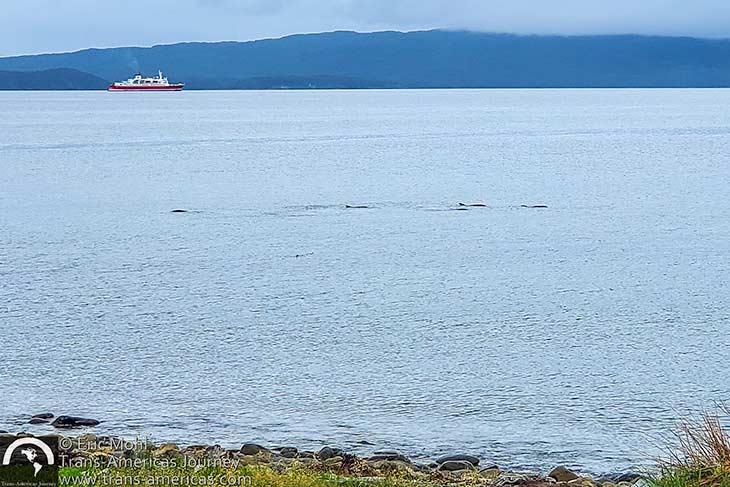 A pod of dolphins in the Beagle Channel near Estancia Harberton.

Tour companies in Ushuaia also offer guided day trips via boat or bus from Ushuaia to Estancia Harberton. You can also hire a taxi for the trip between Ushuaia and the ranch. Like many things in this part of the world, Estancia Harberton is not open year-round so plan your visit between October 15 to March 31.