We wouldn’t put Guatemala City on the top of anyone’s travel list. It’s sprawling and pretty much full of belching buses and pissing men, not to mention the legacy of Guatemala’s troubled past, which is a more pleasant way of referring to the incredibly bloody and brutal civil war which raged in Guatemala from 1960 to 1996. Despite these problems, Guatemala’s capital city has charm if you know where to look. And that’s where our Guatemala City travel guide comes in. 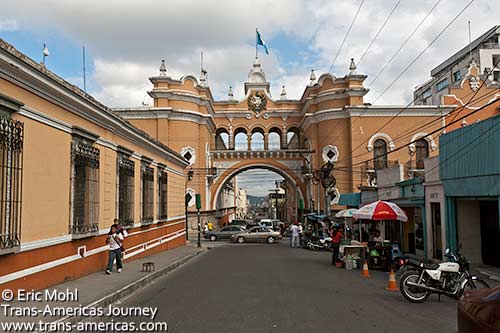 The Palacio de Correros (palace of letters) in Guatemala City houses the post office (of course) and an arts center and is one of the most interesting buildings in the city.

Peace and democracy were declared in Guatemala in 1996 but the training wheels are still on. Kidnappings and drive-by murders still happen at an alarming rate. Politics is still a very messy business.

For exmaple, during this year’s Presidential election (there are 28 political parties in Guatemala), Sandra Torres, wife of the incumbent president, went through with a sham divorce from her husband (they stated in the press that they still loved each other) in order to try to clear the way for her to make her own run for the top office.

What to do in Guatemala City

When we pulled into Guatemala City we were greeted by a fairly impressive Michael Jackson impersonator complete with sequined glove. He was busking at a stoplight where he moonwalked through the crosswalk when the light turned red. So far, so good. 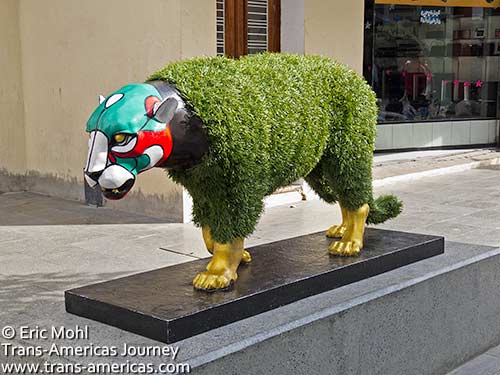 An outdoor art installation along Sixth Street in Guatemala City which has recently been turned into a pedestrian mall.

Guatemala City’s downtown area also recently got a bit of a facelift with a new pedestrian mall dotted with outdoor art. This pedestrian mall, down 6th street, is a good place to get acquainted with a Central American shopping phenomenon called pacas. Many millions of pounds of lightly used, factory second, or even brand new clothing is sent to Central America every year. The clothes are bundled into massive packets (pacas) which local retailers buy in bulk.

Paca prices are low and there are finds to be had but it takes patience and persistence. Still, we’ve scored board shorts, skirts, tank tops, and more for just a few bucks at pacas. They’re a great source of mid-trip replacements for any traveler on a budget. 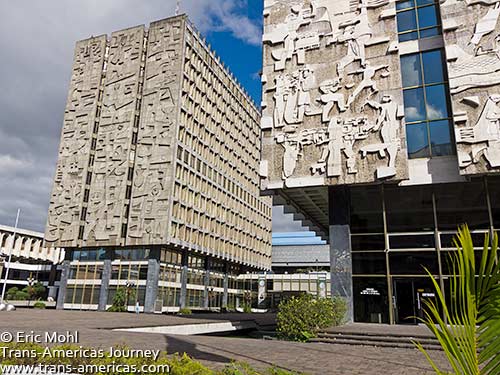 The Banco de Guatemala headquarters (pictured above) and the Palacio de Justicia both bear relief sculptures by Dagoberto Vasquez.

What’s not reasonably priced are the museums in Guatemala City, of which there are many. Sadly, the average price of admission is US$6, which, for us, meant that we could only afford to visit one. 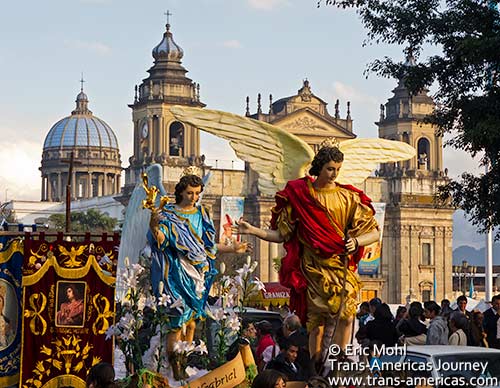 We chose the Museo Ixchel for a crash course in world-famous Guatemalan textiles. It did not disappoint and our 50 quetzales (about US$6) combo ticket also got us into the adjacent Museo Popul Vuh. This museum focuses on Mayan artifacts including incense burners, wooden masks, and burial urns and it also has a copy of the ancient Dresden Codex document but, oddly, not a copy of its namesake Popul Vuh text. 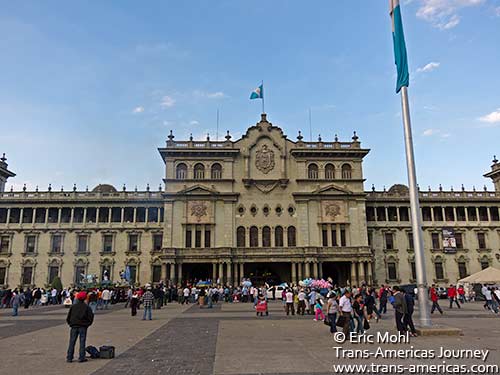 The Palacio Nacional in Guatemala City.

If you’ve got gifts or souvenirs to buy do it at the gift shop in the Museo Ixchel where great quality and great prices are available on traditional textiles as well as modern products (placemats, napkins, etc) in traditional patterns and vibrant colors. 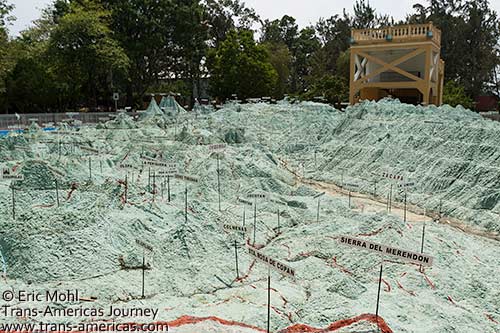 The Mapa en Relieve in Guatemala City is a city-block-sized topographic representation of Guatemala. Oddly, it shows Belize as part of Guatemala…

The Mapa en Relieve, a super-large-scale map of Guatemala (also US$6) is located in a residential neighborhood and the giant topographic map sprawls over an entire block depicting the country’s topography and taking a few liberties with borders. For example, Belize is shown as part of Guatemala.

Like we said, the training wheels are still on…

Where to eat in Guatemala City

By far the most common dining option in Guatemala City is American fast food. Pretty much every single major chain is open for business in Guatemala City and everyone was in a lather about Starbucks’ debut in the country when we were there. But bear with us. It gets better.

Chinese restaurants are also a common sight in the city and while the food is more  Chinese American than Chinese Chinese, it’s affordable and portions are huge. Come hungry or ready to share. 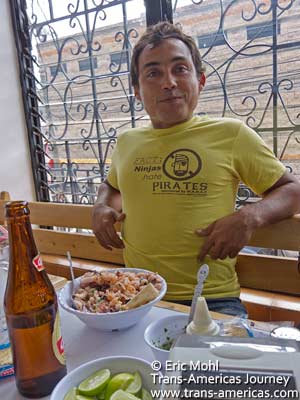 Our buddy George (aka Comandante of the Lovelution) took us to his favorite ceviche restaurant, Los Chavos in Zone 5 of Guatemala City, and it quickly became our favorite too.

The real food find in Guatemala City, however, is Los Chavos with two locations in Zone 5. This long-standing seafood restaurant, which started out as a street cart, serves up cooked seafood dishes but the ceviche is the stand out.

You choose your ingredients (fish, shrimp, calamari, etc) and your size and they whip up a bowl of unbelievably fresh fish perfectly seasoned. A tiny bowl of seafood bisque is the perfect amuse-bouche. Our thanks to George and Mandy for taking us to Los Chavos. At 100 quetzales (US$13) for a large ceviche that’s big enough to share, it’s reasonably priced too.

Where to sleep in Guatemala City

Guatemala City is divided into a bunch of different zones, each with its own personality and level of safety and services. Zone 10, for example, has the fancy hotels. Zone 1 is central to downtown and offers friendlier prices. This is where we found Hotel Quality Service.

A Guatemalan couple who lived and worked in the US for years (she as a professor, he as a real estate agent) decided to return to Guatemala and turn some family property into a hotel. The aptly named Hotel Quality Service is a clean and safe option for around 250 quetzales (about US$30) including a full breakfast and Wi-Fi. The hotel also has roomy indoor parking–a bonus in this town where we would not feel comfortable leaving our truck on the street (or any other city, really).

The Hotel Quality Service also has one of the most meticulous gardeners we’ve ever seen. Don’t even think about touching any of the gorgeous plants he nurtures in the hotel’s central courtyard. He has been known to yell.