Day 6 of our Journey

There’s a reason Jazz Fest takes place over two weekends and that reason is so that smart people can plan to stay during the week in between and enjoy a whole other side of the city. Crowds disappear meaning you can get your requisite Café DuMonde coffee without waiting in a 45-minute line. 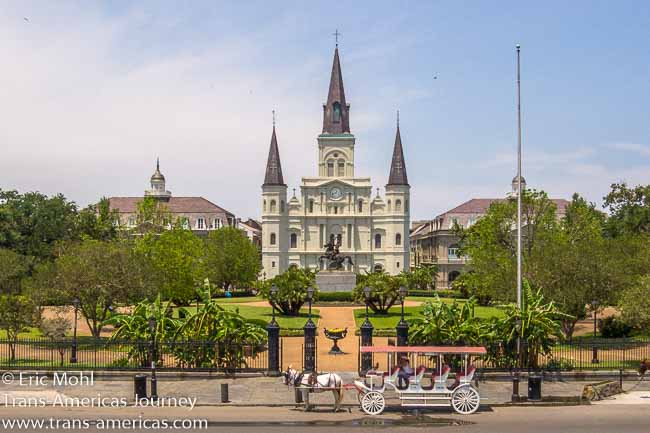 During the week the music seems to multiply at the city’s many clubs and venues. The result is a cornucopia of nightlife options that can be crazy-making if you are unable to accept the fact that you cannot be everywhere at once. It’s worth giving it your best shot, however. So, armed with listings from local newspapers and magazines and the cell phone numbers of our friends about town, we played our share of musical chairs going from the hole-in-the-wall joints that line Frenchman Street all the way out to the grungy glamour of The Maple Leaf on the other side of town and sometimes back again in one night. 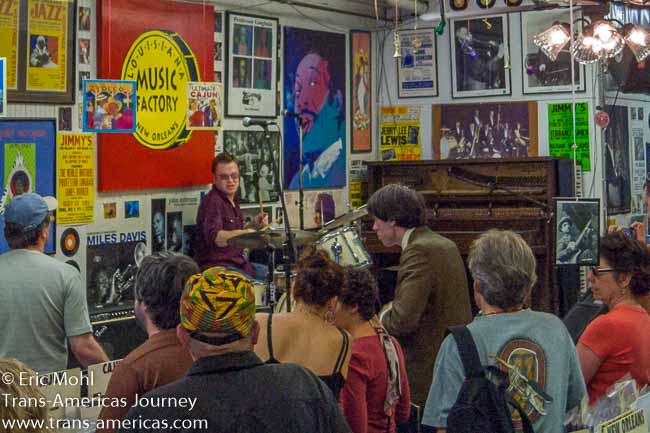 Stanton Moore giving a lesson about the history of jazz drumming at the Louisiana Music Factory in New Orelans.

Why?  Gov’t Mule (for the record, Karen’s favorite) with Galactic and the Dirty Dozen Brass Band, Anders Osborne, Walter “Wolfman” Washington with Bonerama and George Clinton and P. Funk are just a sampling of the great music to be had in one single night in New Orleans. You see how easy it is to let the sun beat you home… 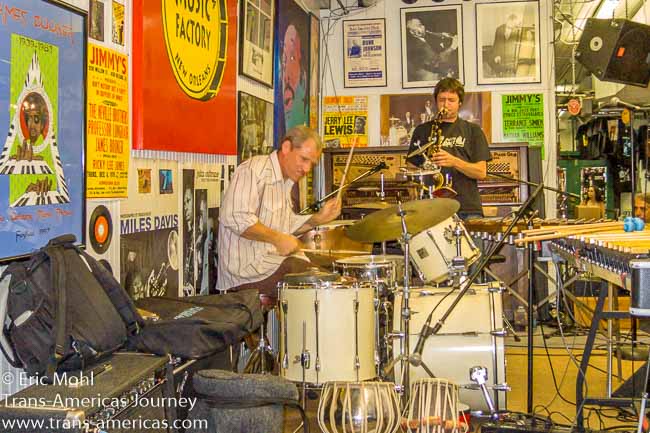 If you can manage to drag yourself out of bed before 5 pm the next day, your mid-week treats are afternoon talks/performances in local record stores by some of the very same artists you’ve been killing yourself to go see all night. Galactic drummer Stanton Moore put on his Professor cap and gave a compelling schooling in the evolution of jazz drumming from Civil War military march to modern-day. Later that same day Morning 40 Federation performed at the Louisiana Music Factory and gained two new instant fans. 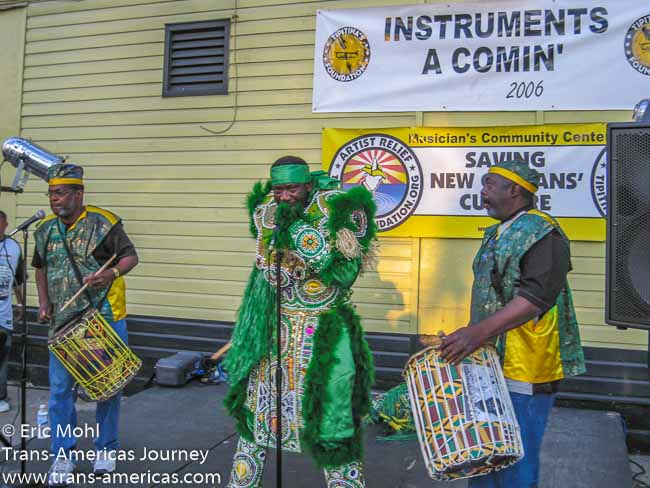 Another mid-week must-do is the annual Instruments A Comin’ fundraising event held at Tipitina’s to benefit school music programs. Within seconds of our arrival, we bumped into our friends Kristin and Mike who moved to New Orleans from NYC a few years ago. 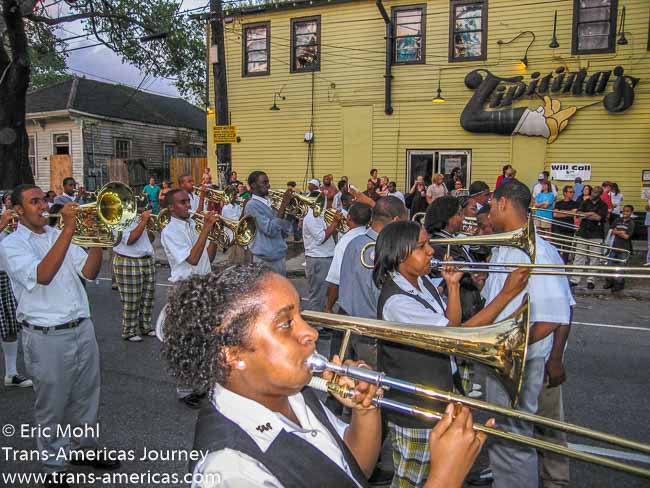 The four of us headed into Tip’s and made a beeline upstairs to sample great food provided by local eateries including Jacques-Imo’s and  Dick and Jenny’s. With a revolving cast of musical luminaries taking the stage—including Galactic, Troy “Trombone Shorty” Andrews and the Rebirth Brass Band—it was a wonderful way to reunite. 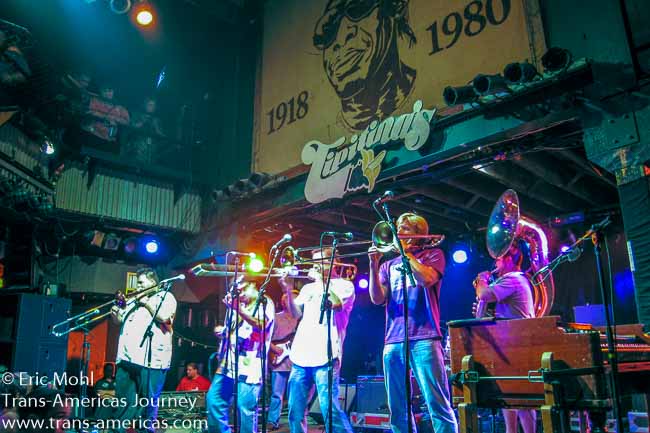 Bonerama with Leo Nocentelli (The Meters) at the Tipitina’s benefit 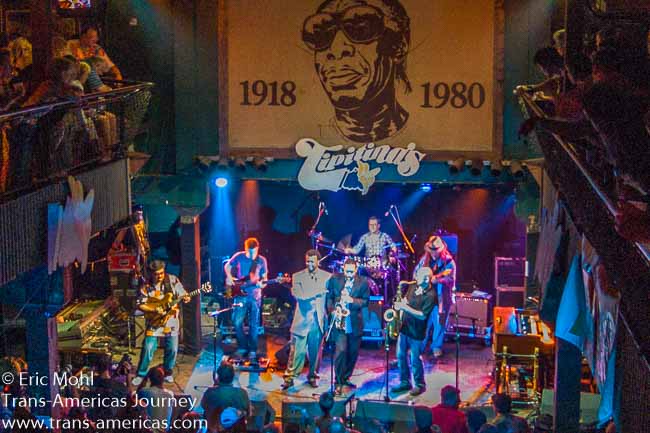 Galactic with Leo Nocentelli (of The Meters) and other guests at the Tipitina’s benefit. 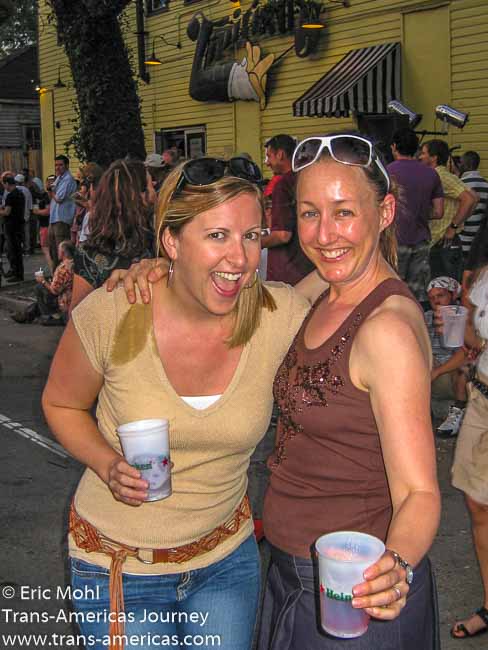 Karen and our friend Kirsitn at the Tipitina’s benefit.