On the sage advice of Bob, the Airstream-loving host of the North Rim Campground in Grand Canyon National Park, we headed straight for Locust Point in a neighboring section of the Kaibab National Forest which is administered by the United States Forest Service (USFS).

The USFS manages a huge amount of land on the canyon’s rim just on the outskirts of the park and, despite its less than enticing name, Locust Point proved to be a wonderful boondocking location, just as Bob promised—remote, private, gorgeous, and slightly hard to reach.

After 20 miles (32 km) or so of well-maintained dirt roads, we hit the turnaround at Locust Point. From there we branched off down a rough and narrow spur trail (to call it a road would be too generous) until we reached the canyon’s rim. With darkness coming, we slowly and carefully towed our Airstream to a stunning vantage point and parked it. We ended up camped so close to the rim that we’re thankful neither of us are sleepwalkers.

Panorama from Locust Point looking out over the Grand Canyon just steps from our Airstream.

From bed we could see the far wall of the canyon and the breeze brought over the faint remains of our nearest neighbor’s nightly playlist of Bob Marley and traditional Native American flute music, which suited the mood perfectly. 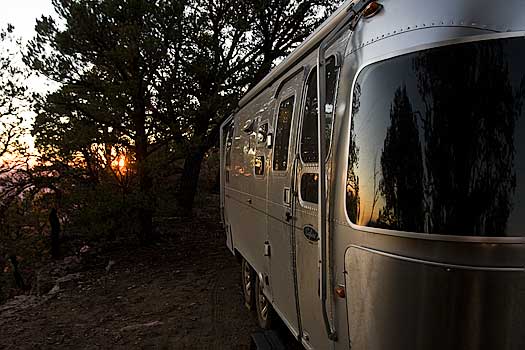 Airstreaming on the edge of the Grand Canyon at Locust Point.

Because we were on National Forest land we were allowed to gather wood, which we did in anticipation of building a campfire in one of the lovely stone fire ring some former camper thoughtfully left behind. However, when night fell the breeze picked up to a wind which carried embers from our fire straight over the edge of the canyon so we doused it before we started a catastrophic forest fire.

It was out here at Locust Point that we discovered another use for our Safari: wildlife blind. If we sat very quietly inside the Airstream, birds and squirrels seemed to forget we were there and wandered right up to the Airstream—in some cases even walking around on the roof and peaking in through the roof line windows. 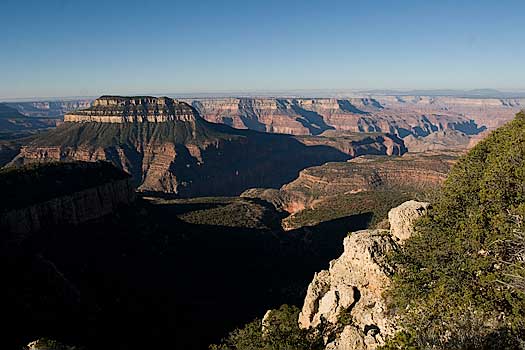 The view from the rim of the Grand Canyon, mere feet from where our Airstream was boondocked.

After a few contented days we really did have to leave Locust Point, which required carefully extricating ourselves from our prime location. We were squeezed in between tree branches very close to the top of our Safari and rocks and stout brush on all sides. There was no way to turn around, so we spent nearly an hour painstakingly backing up and around (and sometimes through) these obstacles until we were back on the main dirt road.

We prefer to think of the scratches that this adventure inflicted on the Airstream as battle scars of the best kind.