One often overlooked reason to visit New York City is its live music scene. That’s one of the main things we miss about living in Manhattan since we left the city in 2006 to embark on the Trans-Americas Journey. Every night at all hours there are hundreds of clubs and venues around the city playing every kind of music to every kind of crowd. So you bet we went to see plenty of live music at venues all over New York when we returned to the city for a short visit. Here’s our New York City Live Music Guide. 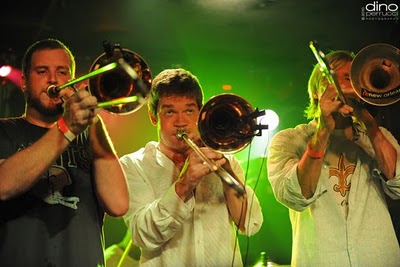 Venue: Sullivan Hall
Neighborhood: Greenwich Village, Manhattan
Vibe: The long narrow layout, ample approachable bar and low ceiling of Sullivan Hall are pleasantly reminiscent of one of our all-time favorite venues–a place called Tribeca Rock Club, may it rest in peace.
The band we saw: Bonerama, a wonderful horn-based New Orleans funky funk fun machine, was in the midst of a weekly residency at Sullivan Hall and we caught them one night along with special guests Kyle Hollingsworth (from the band The String Cheese Incident), guitar wiz Steve Kimock, as well as one of the best young keyboard players in the world, Jon Batiste of the legendary Louisiana musical family. Dancing ensued. 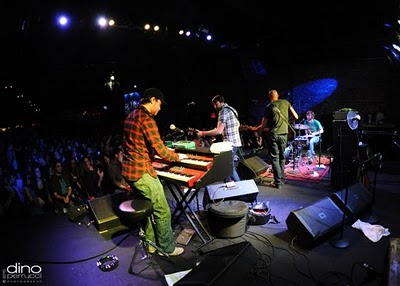 Venue: Brooklyn Bowl
Neighborhood: Williamsburg Brooklyn
Vibe: This place was opened by Pete Shapiro, the man behind a club called The Wetlands which was one of the city’s most iconic and tempo-setting live music joints until it closed in 2001. Brooklyn Bowl doesn’t look like The Wetlands (which somehow managed to merge grungy, hippy and head-bangy in both decor and music). Instead, the spacious Brooklyn Bowl’s got a studied design (urban roadhouse) plus bowling lanes right next to the stage. There’s also awesome southern comfort food provided by a restaurant group called Blue Ribbon. We quickly understood what all of our friends have been raving about. Brooklyn Bowl looks and feels franchise ready—-as if the place was opened as a brand ready to roll out across the country as a hipper more relevant version of The House of Blues–and national expansion rumors are already circulating (heads up).
The band we saw: The New Mastersounds delivered their Brit funk (think classic Meters) to a sold out crowd. We’ve been into this band since we saw them at the High Sierra Music Festival years ago. And we still love them. But when did guitarist Eddie Roberts start looking so much like actor Ewan McGregor? Check the band out for yourself by watching Coals to Newcastle, a very cool rockumentary about the band made by our friend Marca (don’t blink: Eric is in the movie for a few seconds).

Venue: Ace of Clubs
Neighborhood: NoHo Manhattan
Vibe: Insider basement. This place is stripped down to just the basics: bar, stage, band.
The band we saw: We made it to Ace of Clubs twice. First to see Disgrace, a temporary acoustic project with three of the guys from the band moe. The next time we ventured down the creaky stairs to Ace of Clubs was to see a band called American Babies featuring appearances by two of the original band members: our friends Scott Metzger on guitar and Joe Russo on drums. Both bands delivered inventive, experimental sets which were just right for the intimate room. 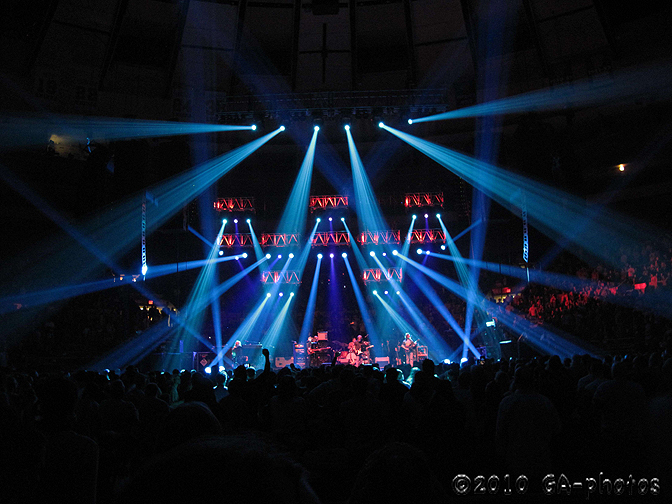 Venue: Madison Square Garden
Neighborhood: Midtown Manhattan
Vibe: Mega star Zamboni. This is where the biggest acts (from music to sports to politics) come to strut their stuff. As they say, if you can make it here…
The band we saw: Eric traveled around the country to see more than 200 Grateful Dead shows back in the day (including some shows at Madison Square Garden). A band called Further is the latest post-Jerry Garcia incarnation of the music and the band features Bob Weir and Phil Lesh from the original GD lineup plus a new cast of strong musicians including our friend Joe Russo on drums. Joe rocked it up there on the big stage–especially during the opening minutes of the band’s cover of Pink Floyd’s “Time.” We couldn’t be prouder.

Venue: Rockwood Music Hall
Neighborhood: Lower East Side Manhattan
Vibe: The tiny footprint and all-glass storefront of this bar/stage give this venue a voyeuristic speakeasy feel.
The band we saw: Kelli Scarr is a singer/songwriter with an ethereal voice (she’s a Moby favorite and he sometimes shows up at her gigs). Backed by the expressiveness of Scott Metzger on guitar, the rock train of Andrew Southern (from the band RANA) on bass and the foundation of a guy named Taylor on drums this was an intimate mellow show as Kelli and crew tried out some new songs. 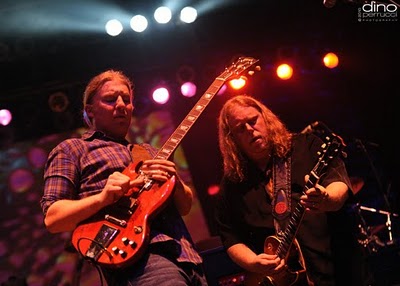 Warren Haynes (right) and Derek Trucks performing at the Another One For Woody Benefit Concert at Roseland Ballroom. Photo courtesy of Dino Perrucci.

Venue: Roseland Ballroom
Neighborhood: Midtown Manhattan
Vibe: This 3,200 capacity venue is housed in a building that was constructed in the ’20s as an ice-skating rink. Today the faded glory is heavy on the faded and the sound isn’t always too hot but we were lured inside by a once-in-a-decade show. UPDATE: this venus has closed.
The band we saw: We dropped into Roseland to take part in a benefit concert called Another One for Woody which celebrated the life of bassist Allan Woody (Allman Brothers, Govt’ Mule) who passed away 10 years ago. The mega-star-studded five-hour concert featured current members of Govt’ Mule, the Allman Brothers Band, and Luther and Cody Dickinson from the North Mississippi Allstars just to name a few. The emotional rockfest was capped off with a moving performance by Allan Woody’s daughter Savannah.