More than 300,000 people (including us) enjoyed the sixth Lollapalooza Music Festival in Argentina. We saw bands we know and bands that were new to us and Eric shot more than 5,000 photos. Here are our favorite shots and top highlights from Day 1 of the Lollapalooza music festival in Buenos, Aires Argentina including very diverse musical performances from Kamasi Washington, Bring Me the Horizon, Portugal. The Man, Rosalia (one of the few female performers on the lineup), Jorge Drexler, Interpol, Post Malone, Twenty One Pilots, and Steve Aoki. You know we love live music and we’re willing to travel for it, so let’s go. 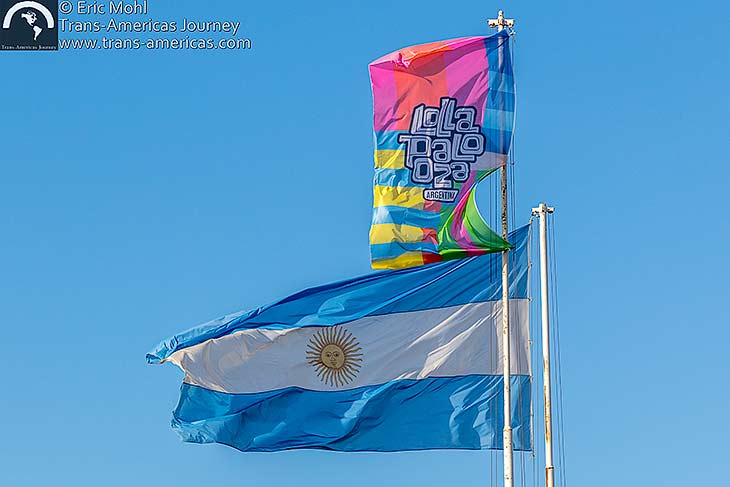 Welcome to the sixth Lollapalooza music festival in Argentina.

Crowds were thin on a Friday and the weather was fine as we headed to the Hipodromo de San Isidro for the first day of the 3-day Lollapalooza outdoor music festival in Buenos Aires, Argentina featuring a lineup of acts on four stages. 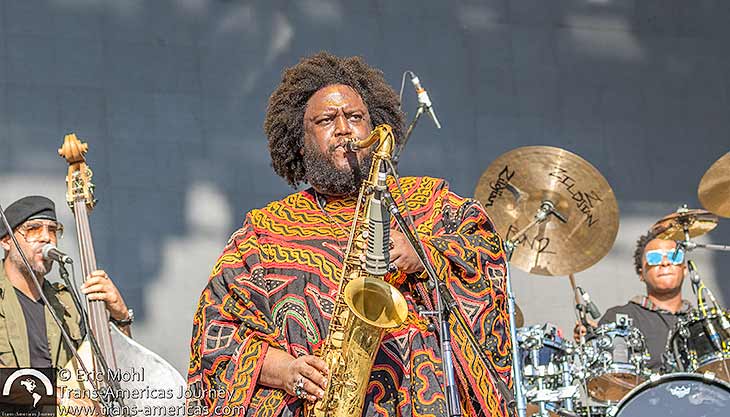 Best new (to us) musician: Kamasi Washington is a jazz saxophonist from Los Angeles who’s been described as “pop, punk, and protest.” He was all of that and more during a powerful and theatrical performance. Also: best coat of the fest and bonus points for wearing it in the heat of South American fall. 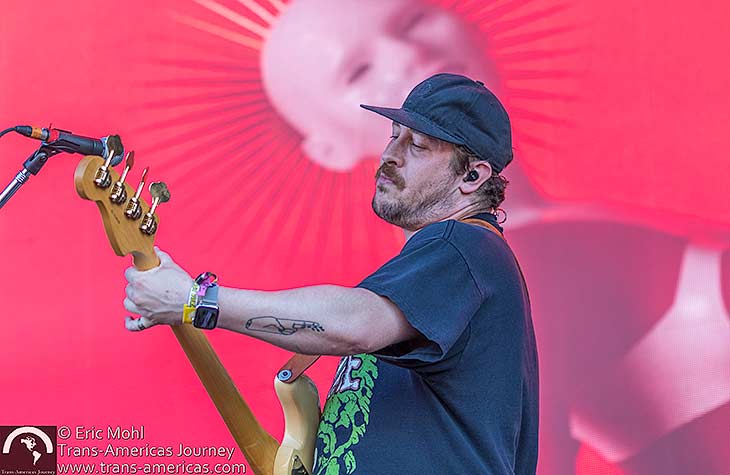 Zachary Scott Carothers of Portugal. The Man at Lollapalooza Argentina.

Best first time live: Many of our music-loving friends in New York City have been raving about Portugal. The Man since the group’s debut in the mid-2000s (hi Neddyo!), but we’d never seen the band live until this festival. 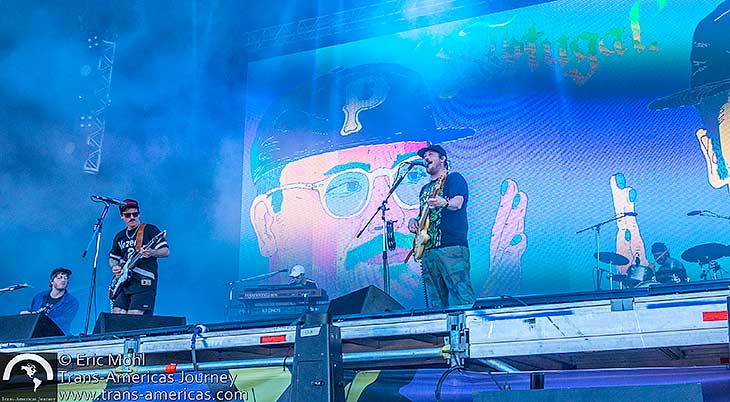 We were so into the smart alt-rock that it wasn’t until the set was almost over that we realized that one band member (far left in the photo above) rocks it out from a wheelchair. 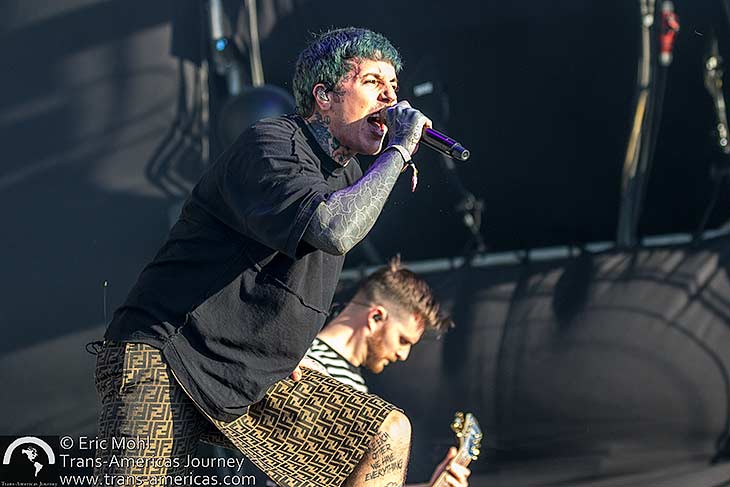 Bring Me the Horizon held nothing back at Lollapalooza Argentina. And, yes, that’s a skort.

Most intense: The crowd for the Bring Me the Horizon show was all in. The British band, which seemed like a cross between Green Day heavy and Rage Against the Machine lite, drew so many people in such a small space that once the bouncing started, Transformer-sized staff were busy plucking about-to-be-crushed fans out like stems of saffron. Up front, the bass was so powerful it felt like a heart attack. 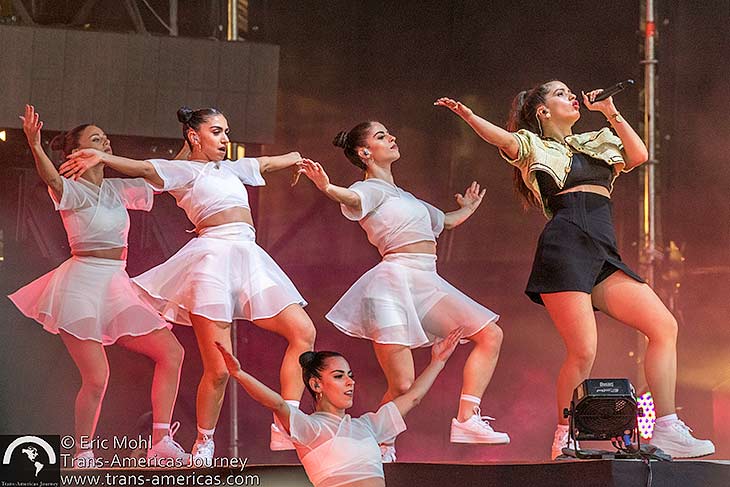 Rosalia and her team performing at Lollapalooza Argentina. And, yes, that’s another skort.

Derivative, but fun: Spanish artist Rosalía was one of very, very (very) few women on the Lollapalooza Argentina lineup. Her track-heavy show featured a lot of female backup dancers and the fun felt like Ariana Grande meets Salt n Peppa in Spanish.

Not so fun fact: In 2005 Jorge Drexler won an Academy Award for a song he wrote for the soundtrack to The Motorcycle Diaries. Academy officials didn’t think he was famous enough to perform the song at the awards ceremony, so they got Carlos Santana to perform it instead. Wow. Never mind. The crowd at Lollapalooza loved him. 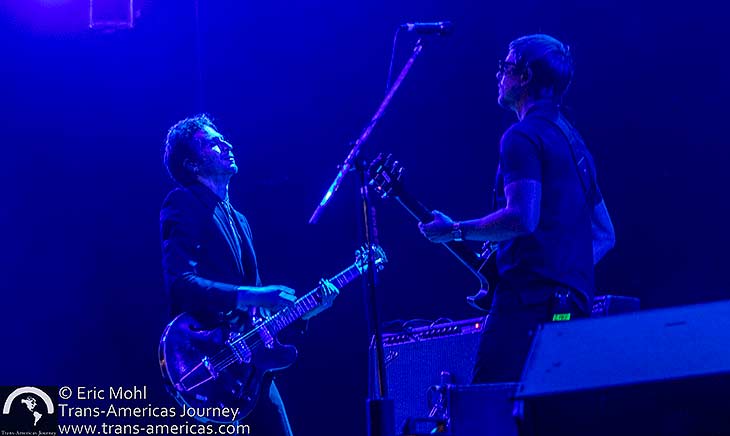 New York City throwback: Indie trio Interpol have been aroundd since the 1990s (the lineup has changed through the years) and they retain a kind of dark, tormented element that reminds us of some of the live music clubs in Manhattan where the band cut their teeth and which now, sadly, no longer exist. 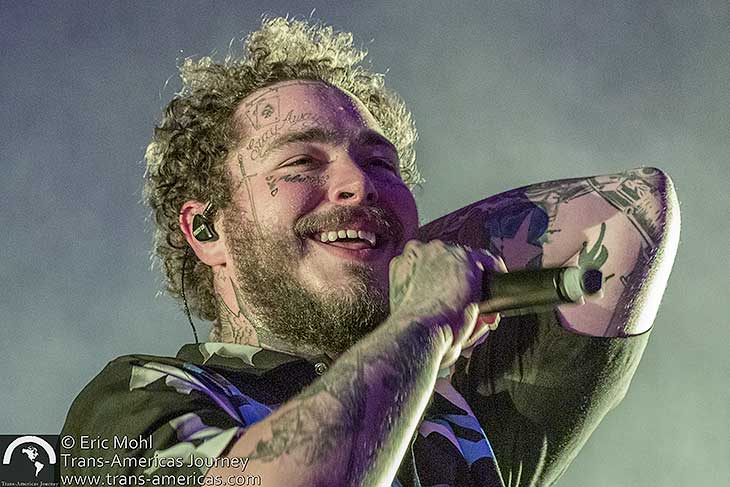 Post Malone brought his tattoos and his potty mouth to Lollapalooza Argentina and the crowd loved it.

Probably the only act your mother has heard of: Hip pop singer Post Malone (real name: Austin Richard Post) hit the stage with lots of swearing and lots of smiling. Could have done without the platitudes on the screen behind him including “We are 100% committed to you loving us”. 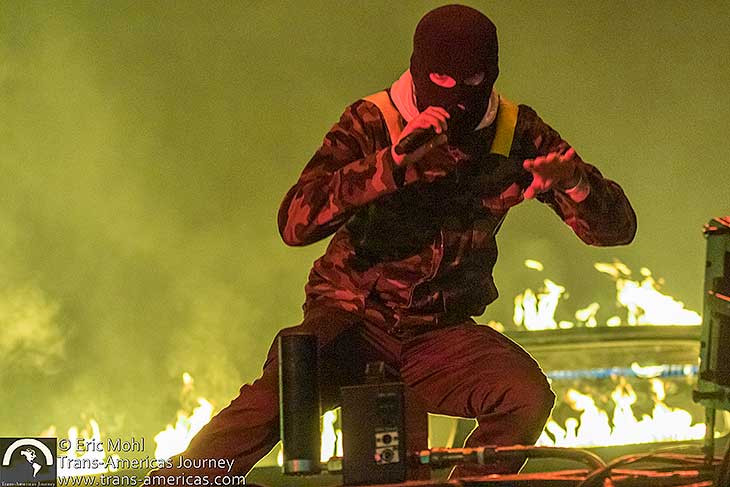 Did members of Twenty One Pilots wear balaclavas just to piss off the photographers in the pit?

Most amazing crowd surfing: Fans of Twenty One Pilots began to build in front of the stage more than an hour before show time. Many were wearing yellow tape on their clothes and on their skin. If you can explain the significance of this, please do so in the comments section below. The band wore ski masks during the first few songs when photographers were allowed into the pit to take photos, so that was a bummer. 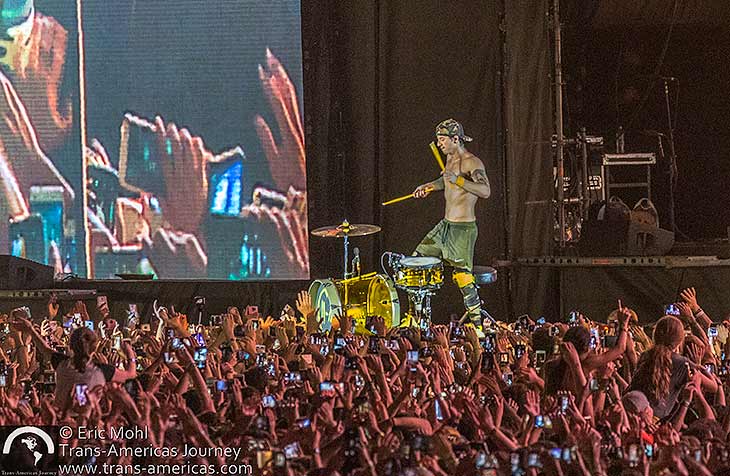 Later in the show, the Twenty One Pilots drummer and his drum kit surfed the crowd (along with his yellow drum sticks) and that’s officially the first time we’ve seen anything like that. Add in a car carcass burning on stage, water on the drums, and more masks and you’ve got a very theatrical show.

See this drum surfing spectacle for yourself in our video on FB:

Most impressive feat of the night. This is the first time we've ever seen a whole drum kit go crowd surfing. twenty one pilots last night Lollapalooza Argentina. #LollaAR 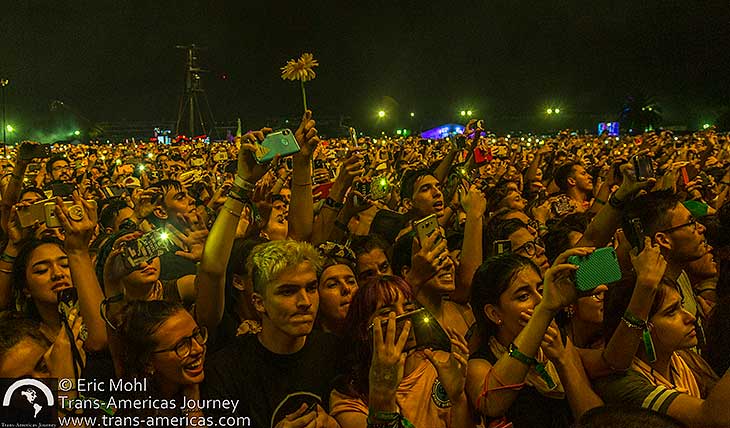 Yellow, yellow everywhere including this customized light display near the end of the Twenty One Pilots show.

As night began to fall, fans raised cell phone flashlights, modified with a yellow film to send out a yellow light (again, if you can explain the significance of this, please do so in the comments section below). 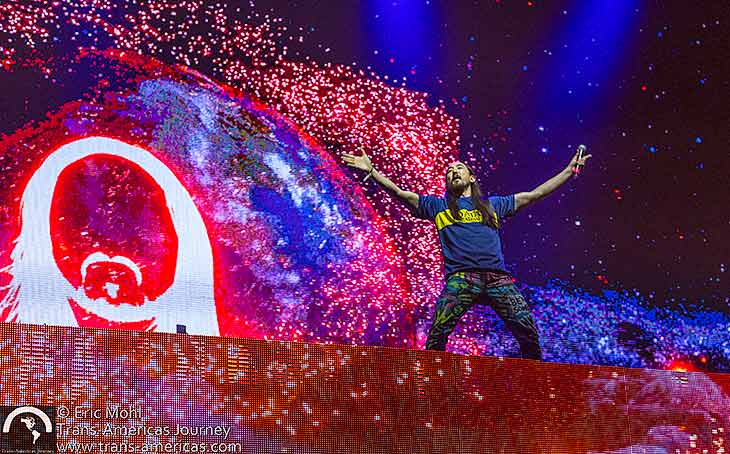 Steve Aoki says hello in his own inimitable way.

Biggest ego (and that’s saying something): Like army ants on the move, the crowd swarmed from the Twenty One Pilots stage across the field to the Steve Aoki stage. Aoki’s audio/visual display was extremely slick. Such lovely type faces! Such graphically stunning visuals! It was also super egotistical with cheap shot slogans like “Are you lonely? I’ll stand by you.” If you’ve seen the Steve Aoki Netflix documentary I’ll Sleep When I’m Dead, you will not be surprised by any of it. 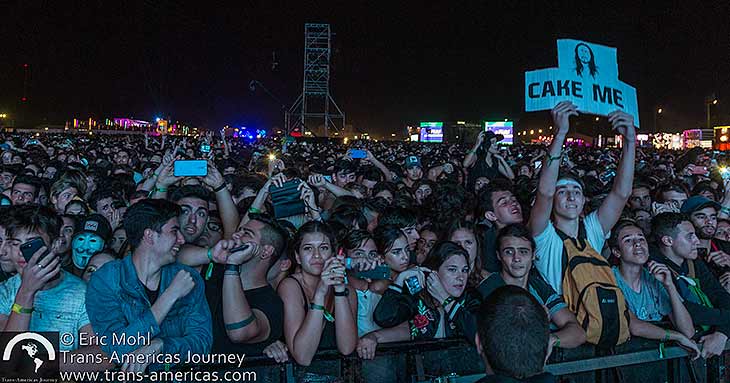 Hits and misses of Lollapalooza Argentina

Hit and miss: The festival was cashless, which meant that festival-goers had a chip in their wristband which could be loaded via cash or credit card.  That sounds great, but it meant standing in a sometimes long line to charge up your chip with cash, then waiting in more lines to buy things with that cash. Also, if you didn’t use all of the cash you put on your chip you had to stand in another line to get your money back. Also, 150 ARS (about US$3.50) somehow disappeared from Karen’s chip.

Hit: Huge black pillows were arranged in circles in a few spots around the venue and they were perfect for resting and napping.

Hit: The massive side-stage screens were very, very high quality so even if you ended up standing in the back you could see the onstage action.

Hit: The festival venue, the Hipodromo de San Isidro, has the greatest grass (soft yet durable) and plenty of space, though there was very little shade. 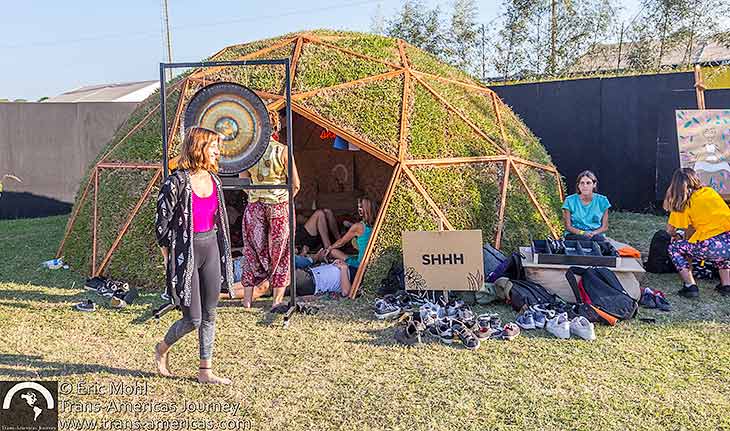 One of the more relaxing areas at Lollapalooza Argentina.

Hit: There was a “green” area with meditation, vegetarian food, etc.

Hit and miss: A wide variety of food vendors had stalls at the festival, sadly they all had jacked-up festival prices.

Hit: Staff members were ready with free water at stations all over the venue, including water available on the rail at all stages, and festival-goers were allowed to bring in an empty bottle.

Hit: Lots of folks were officially collecting trash and there was a program that gave food vouchers to anyone turning in a bag of garbage.

Hit: The two main stages at this venue are too close to each other to operate live in tandem, so you never had to worry about missing something on stage 1 while you watched a different act on stage 2. 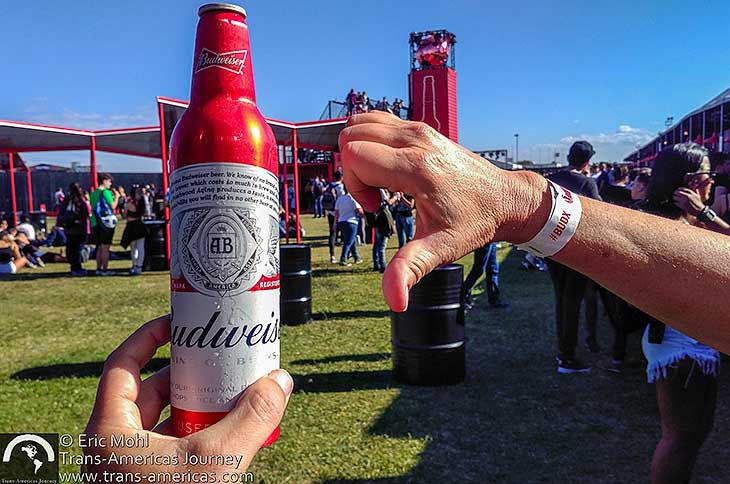 A two beer limit and only Budweisser….big fail Lollapalooza Argentina.

Big, giant, stinking miss: Lollapalooza Argentina has a limit of two beers per person per day and the only beer available was Budweiser. Boo. Hiss. Boo.