Day 21 of our Journey

Shiny Cars and Hippies. That’s what seems to be keeping folks going in the obliterated 9th Ward and annihilated St. Bernard Parish. We knew it was going to be bad in these areas, but it was so much worse without the television screen separating us from reality. 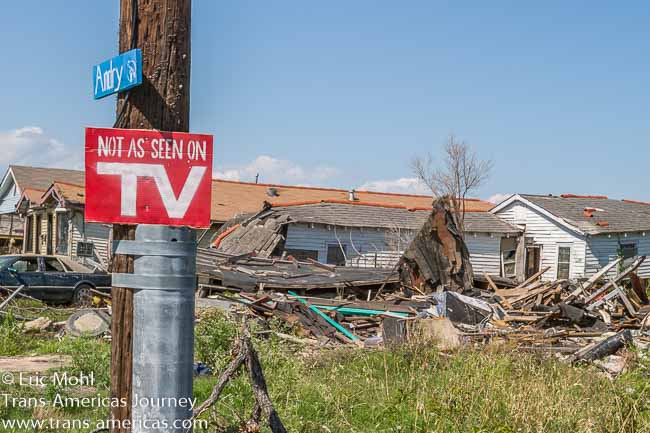 Ain’t that the truth.

As we crossed over a bridge into the 9th Ward area of New Orleans we get an elevated view that let us see the clear wave of destruction fanning out from the breach in the levee. Ninety percent of things within a few blocks were completely gone and the rest of the neighborhood was in a condition much like the Lakeview area we’d spent time in a few days earlier. None of it looked salvageable. 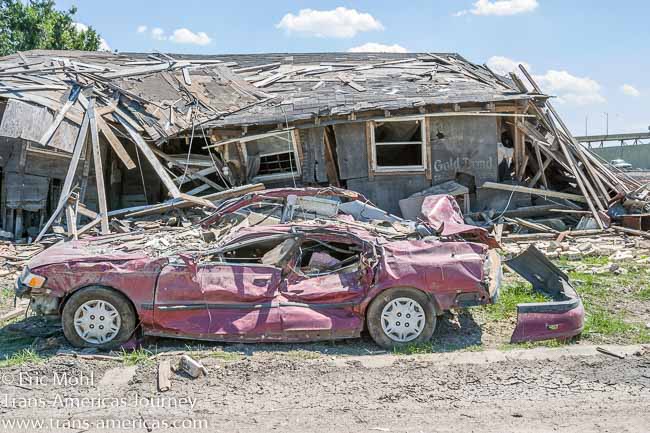 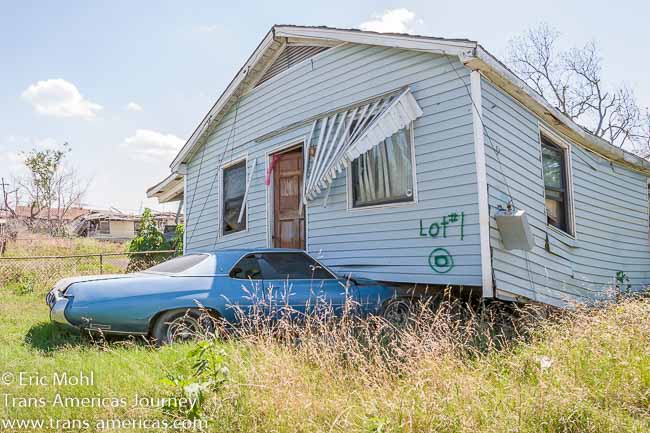 We watched from a distance as a family returned to what was left of their house (a lop-sided, soggy shell) just a block or two from the breached levee. As if they’d done it a dozen times already, they pick their way up the stairs and into the lower level doing what, we don’t know. Maybe just “being home.” 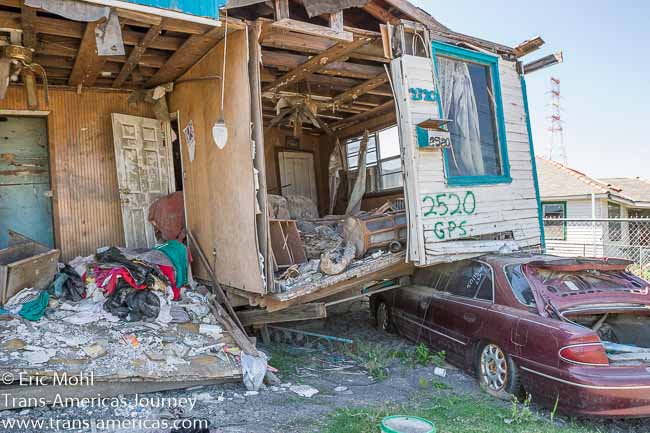 We were reminded of how good it felt when the National Guard and FBI allowed us to go into our apartment after September 11 and do stuff that made us feel like we might, someday, be home for good—like empty the refrigerator and water the plants. This family, however, will never be returning to this home. It’s clearly too far gone. 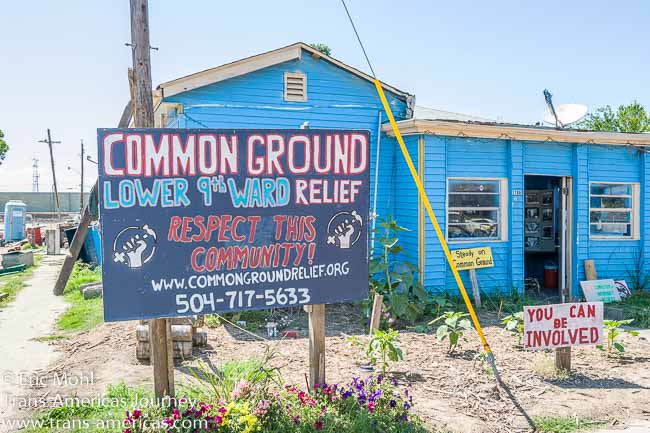 This grass roots group was providing food, water, clothes, and access to computers to those displaced and in need after hurrican eKatrina. 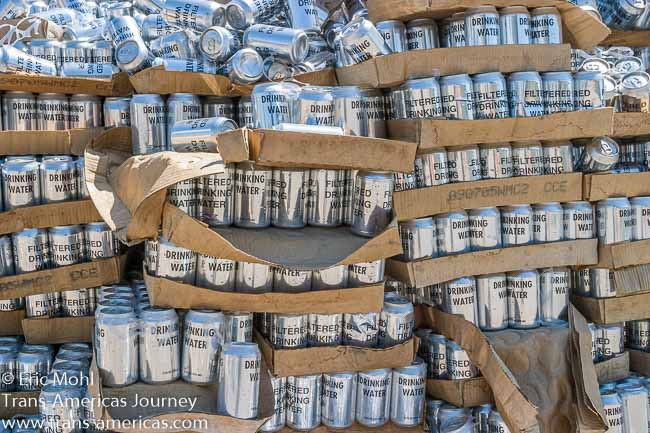 The local water is not safe to drink so volunteers provide these cans.

Debris removal crews had recently entered the neighborhood to finally start disposing of the remains after months of political wrangling. We talked to one contract worker from Colorado who was frustrated and disgusted by Mayor Ray Nagin and his inability to make or stick to decisions about how to proceed with the cleanup. This worker had been in New Orleans for six months and figured more than half of that time had been spent waiting for the official governmental green light to go in and do what he was being paid to do. 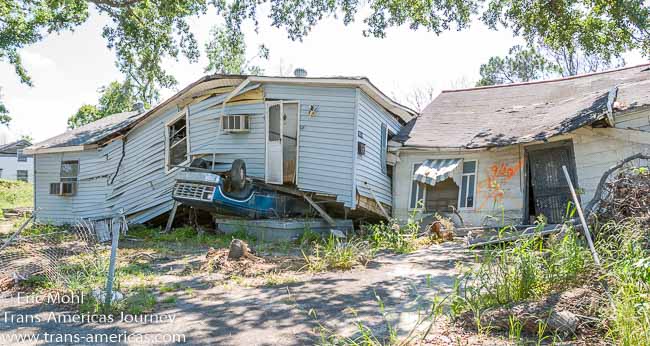 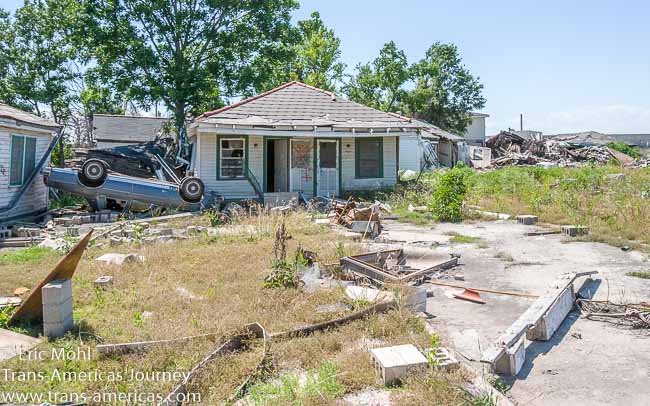 Fats Domino still lived in the 9th Ward and kept his business there (long after his success would have allowed him to move elsewhere) and we remembered the news reports of his rescue during the hurricane. On a long shot, we asked some men if they know where Fats’ house was and they directed us straight to it. 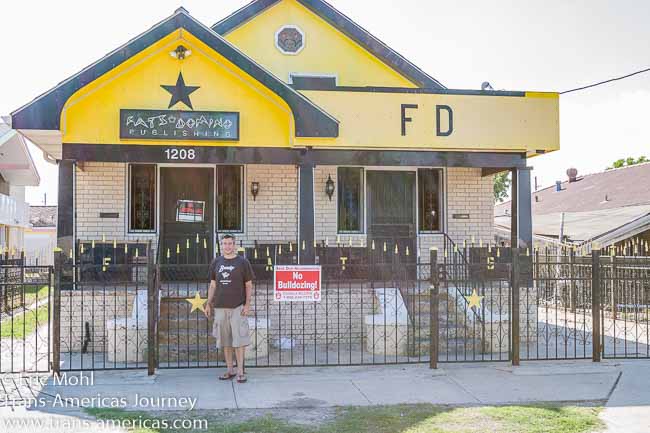 Eric in front of Fats Domino Publishing next to the musician’s house. This is at least 20 blocks from the levee breach and it was still so flooded that Fats had to be rescued.

The Fats Domino compound is on a corner across from a Dollar Store and takes up about three lots. White, angular, and vaguely modern the house is trimmed with festive stripes in Miami Beach pastels and has surveillance cameras all around it. Next door is a home that’s been converted into the equally distinctive office headquarters for Fats Domino Productions. Both buildings are abandoned but not destroyed since they’re located many, many blocks away from the levee breach. However, even this area was under water deep enough to require that Fats be evacuated. Most buildings were still uninhabitable.

In nearby St. Bernard Parish the scenes of destruction were much the same. But, weirdly, many of the car washes are open for business (even if banks, hospitals, grocery stores and schools are not). And they were doing a scorching business. It’s as if—and we totally understand this—folks were desperate to be able to keep some aspect (any aspect) of their lives in control and having your car washed had become something like therapy. 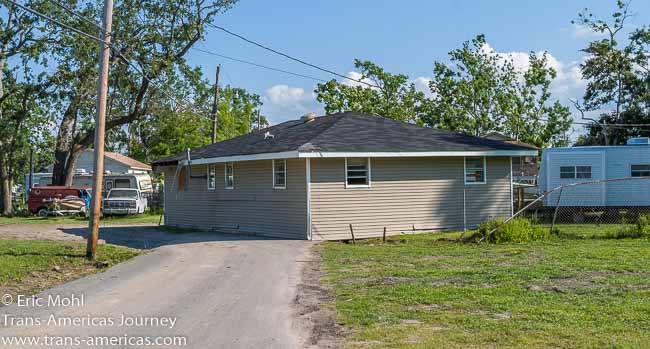 A home washed into the middle of the road. 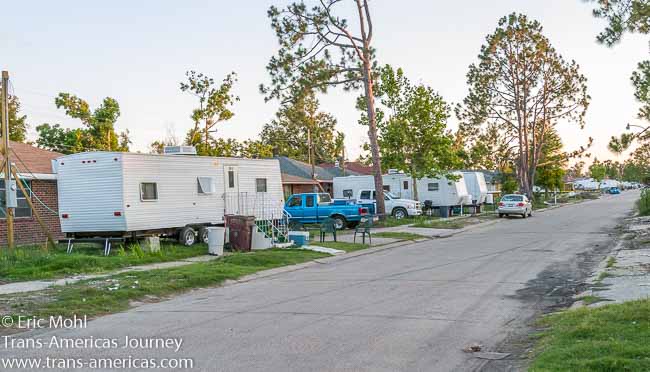 St. Bernard Parish, southeast of New Orleans, was inundated with flood waters and virtually every home was left uninhabitable so people were living in trailers.

Also in St. Bernard, a group of volunteers had set up a mega aid station that was a cross between the Burning Man festival and the coolest Red Cross center you’ve ever seen. Run by a group called Emergency Communities, it was called Made with Love and the centerpiece was a huge geodesic dome tent in which 1,500 people a day were getting free meals (breakfast, lunch, dinner and Sunday brunch). 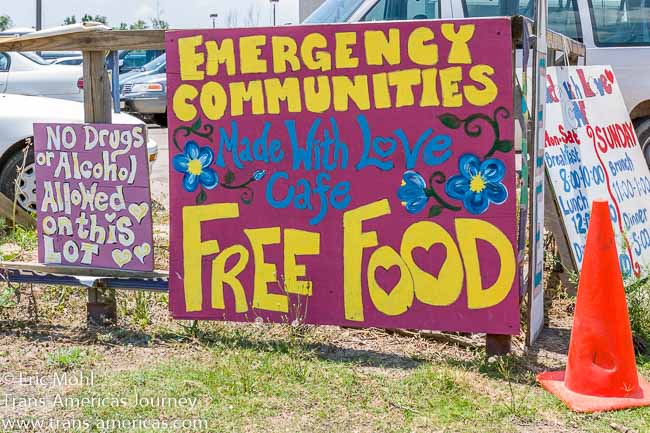 Emergency Communities and the Made with Love Cafe, a group of volunteers who stepped in where the government didn’t. 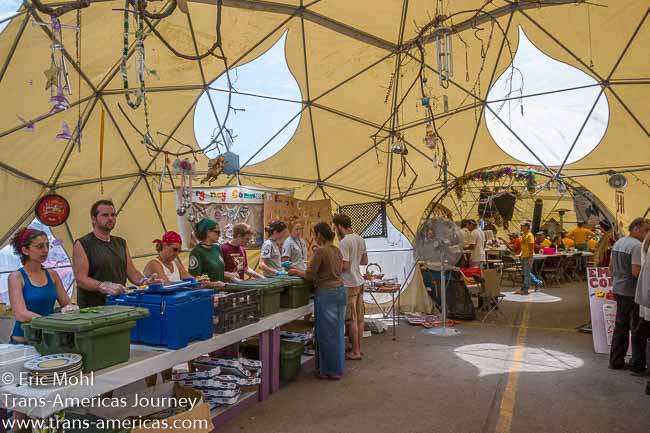 An estimated 1,500 free meals were served to needy area residents by Made with Love until they closed down at the end of May.

Other tents housed things like free clothes, free furniture, free groceries. FEMA had a table set up and the volunteer there was actually doing something: giving away free cell phones and service plans. Free internet access and phone books were also available, which made us stop taking our ability to remain in touch with our friends and family for granted. Everything was cheered up by the addition of handmade signs with happy slogans and smiling animals on them. 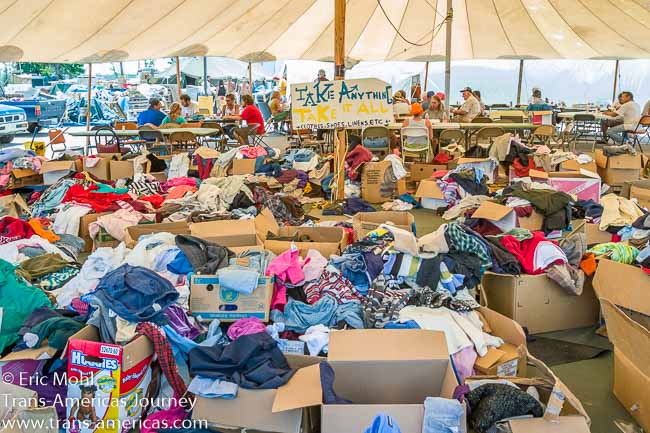 Free clothes for adults, ‘girlz’ and ‘boyz’ for anyone in need at Made with Love.

Made with Love was run by young volunteers with a visible hippie streak, which explained the recycling bins and vegetarian peanut oil in the fryers. By coincidence, we stopped by at lunch time (salad, broccoli—with or without cheese sauce—and sloppy Joes) and we found a whole cross-section of locals there: single moms, whole families, elderly couples, office workers. 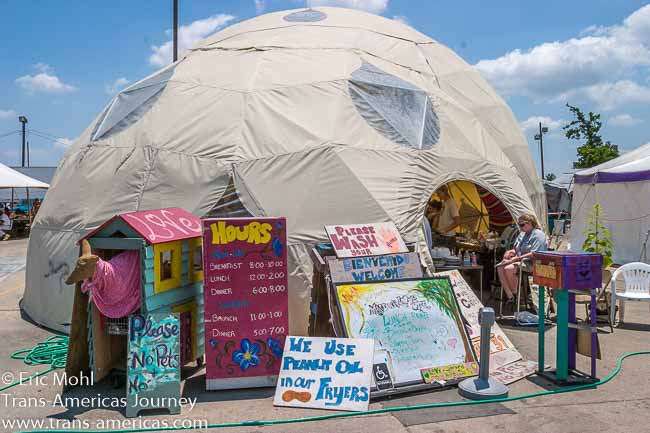 Bright colors and optimism go a long way at Made with Love.

The whole little cosmos was set up in the parking lot of a hurricane-ravaged Off-Track Betting business and it was obvious that the patrons were folks unused to taking and the volunteers were folks used to giving.  Which worked out just fine. Unfortunately, a sign told (warned?) everyone that Made with Love would serve their last meal on May 31. We’re not for indefinite handouts, but there was clearly still overwhelming basic need and we did not come across another group that seemed able to pick up the slack that will be left when Made with Love closes down. 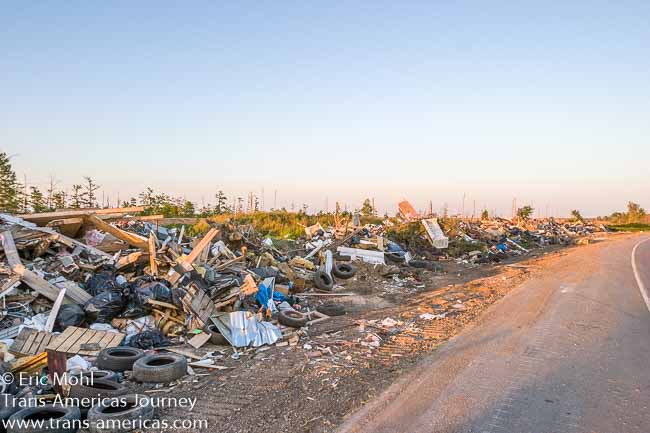 Although St. Bernard Parish has done an admirable job cleaning up the wreckage, large dumps have sprung up on the roadsides. 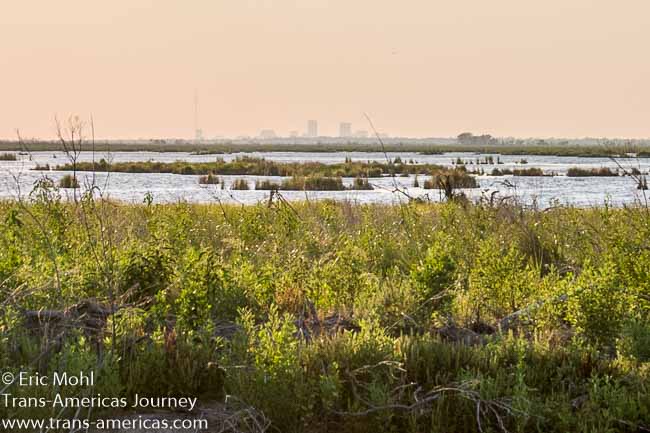 It may take an hour to drive to southern St. Bernard Parish, but downtown New Orleans is clearly visible at dusk.

The good news is that The United Way and members of the Plaquemines Parish government invited Emergency Communities to open a Made with Love Café and Grill in Buras (about two hours south of New Orleans). The new kitchen will stay open until August 20 and they expect to serve up to 1,000 warm, nutritious meals each day. 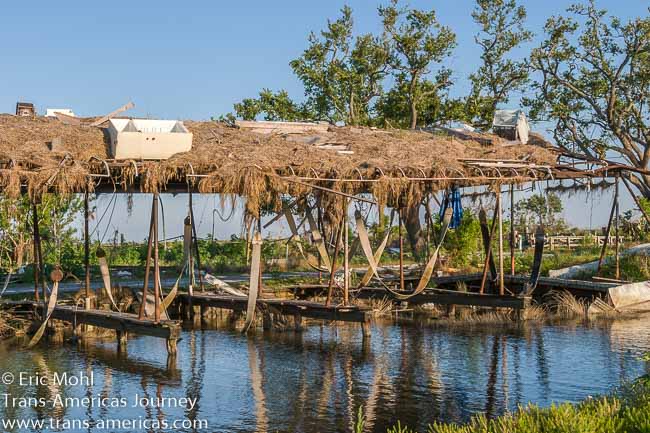 We were tempted to stay and have a sloppy Joe, but we stuffed some bills into the donation box and headed out instead. It’s pathetic, but after only a few days of exposure to hurricane Katrina and her evil aftermath, we were both slowly losing our battle with destruction fatigue. Cars full of mud left wrapped around trees were beginning to seem normal. Hearing folks talk about “taking water” was getting mundane. It was time for a change of scenery and a few days of distance and perspective on what we’d seen in New Orleans. We cannot imagine what it must be like to call these areas home. 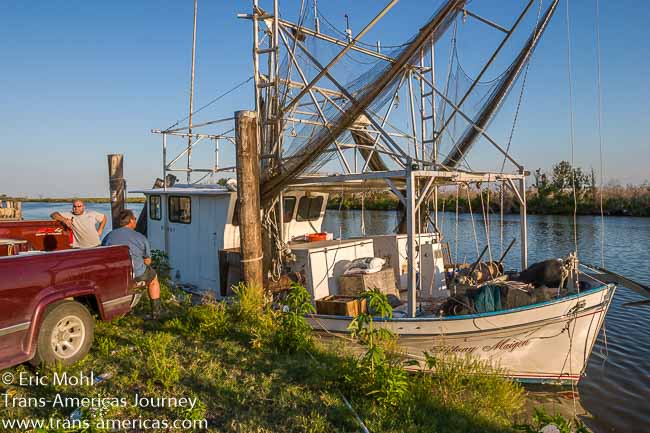 A shrimper and his friend trying to make a living in a business destroyed by hurricane Katrina and local importers who continue to buy cheaper farmed imported shrimp. 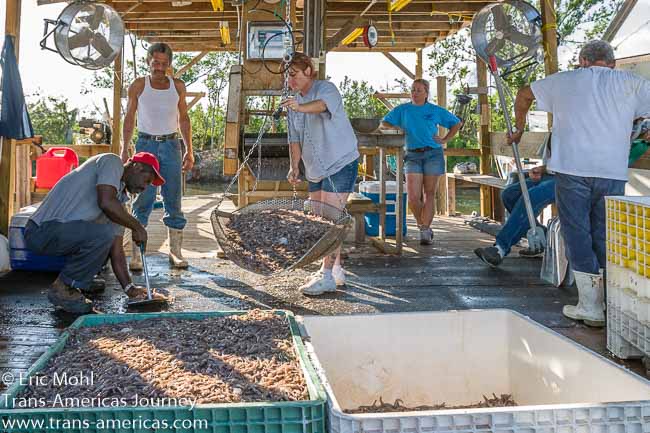 Shrimpers with their catch.