We Drove Our Chevy to The Levee – New Orleans, Louisiana

Day 19 of our Journey

With Jazz Fest madness officially over, we headed to our friend’s Kristin and Mike in Metairie to gather strength and (can you believe it?) continue packing and sorting the bulging contents of our Chevy Silverado.

Though Kristin and Mike’s immediate neighborhood didn’t flood during Hurricane Katrina, many areas around them were (and still are) devastated. Not content with what CNN et al have been feeding us about the status of the so-called New Orleans recovery, we set out in the truck to drive through the nearby swanky Lakeview area to see for ourselves. And see we did. 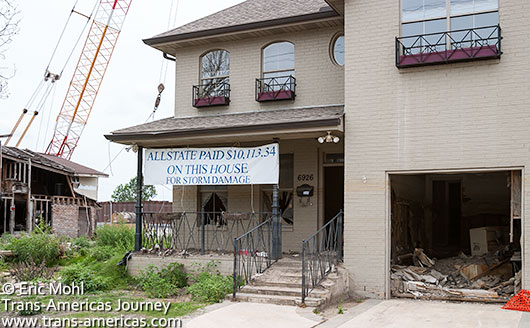 This Katrina damaged house in the Lakeview area of New Orleans had banner out front shaming the owner’s insurance company.

Home after fancy home was washed off its foundation. Car after car was wrapped around a tree. And more than eight months after Hurricane Katrina hit, all the destruction and debris is still in plain view awaiting some miraculous clean up that hasn’t yet come.

Frustration with the institutions displaced residents have turned to for help, including their insurance companies and their city government, was running hot, making the looming mayoral run-off election between incumbent Ray Nagin and Mitch Landreau even more relevant. In case after case, even the most destroyed and abandoned yards were sporting an election sign declaring allegiance to one or the other candidate.

After a few hours it began to feel like the whole world was one big disaster area, so we retreated back to the haven of Kristin and Mike’s house and recuperated by rough-housing with their star dog Ellie who plays tug of war like it’s her job. The normalcy of green grass and dog drool were just what the doctor ordered and we hope everyone in New Orleans gets a dose sooner rather than later.