Day 66 of our Journey

Today our Silverado got its first servicing of the Journey and we felt like parents at the pediatrician’s office as we handed the keys over. With 9,000 miles (14,448 km) on the odometer, it was time. 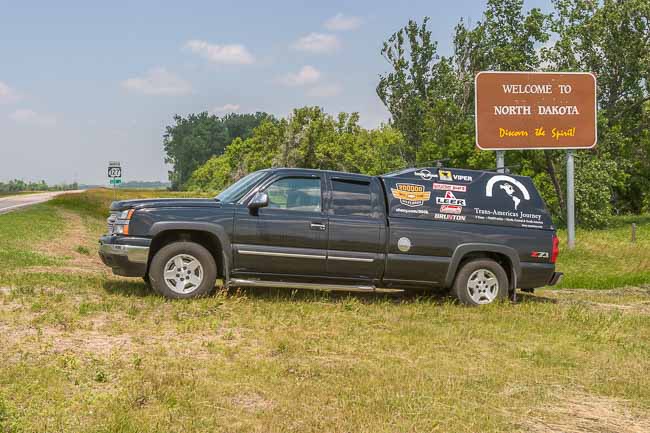 In the waiting room of the Lake Chevrolet dealership in Devil’s Lake, North Dakota we spent the morning chatting with Service Manager Dave Kvislen, whose generous invitation is the reason we were there in the first place. We were also hanging out with some pretty cool guys from the local John Deere dealership who love their Chevy trucks as much as we love ours.

Dwight Jabs drives a 1996 Silverado 1500 with 222,000 miles (357,274 km) on it. It’s his company car and he’s clocking miles in it six days a week—so much time is spent in the truck that he refers to it as his office. It’s pretty easy to rack up the miles when he’s constantly calling on customers (mostly grain farmers) in a sales area that stretches from the Canadian border down through North Dakota to the border with South Dakota. One of his customers is 300 miles (490 km) away from the dealership. One way. Dwight says the dealership once tried a Dodge truck but quickly returned to an all Chevy fleet. “It’s just not as nice a truck,” he said. 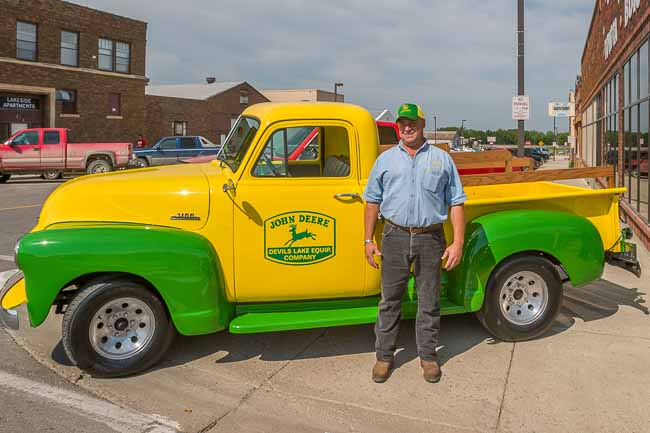 Then there’s Ted Kurtz who showed us the 1953 Chevy truck that he and the Lake Chevrolet guys lovingly restored, then painted John Deere green and yellow. Everything is original (including the engine) and it has more than 200,000 miles (321,868 km) on it. Ted drives it in parades all summer long. He said he paid $500 for it and won’t reveal how much he’s sunk into it to make it as cherry as it is today. It was gorgeous. 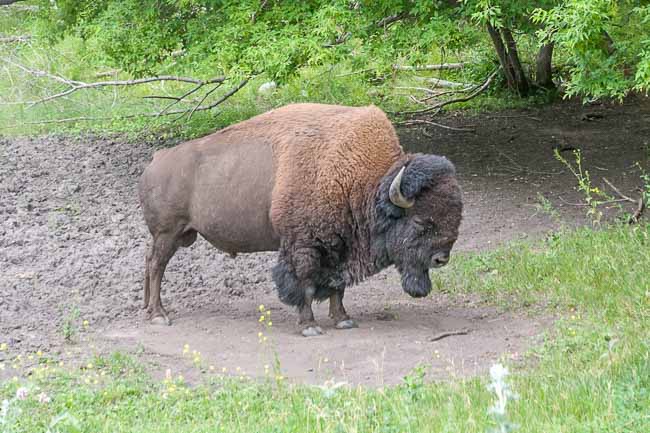 When the Lake Chevrolet guys were done giving our truck some TLC, we visited Sullys Hill National Game Preserve to see its population of buffalo. 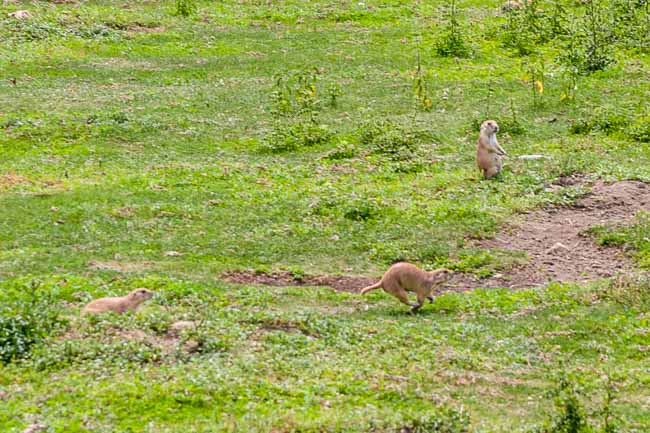 Our next stop was Fargo, but first, we needed to visit the geographical center of North America. Maybe. 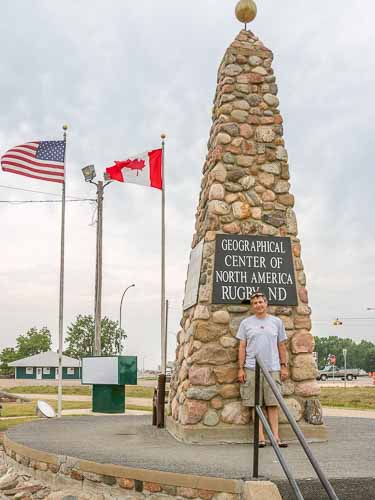 Eric at what may or may not be the geographic center of North America in Rugby, North Dakota.

Employing the kind of brain power that simply makes our heads hurt, big old geeks have calculated that Rugby, North Dakota is smack dab in the middle of the North American continent.  We found it suspicious that the stone obelisk marking the spot is located in the parking lot of the Cornerstone Café, but we pulled in to snap a picture and eat lunch. 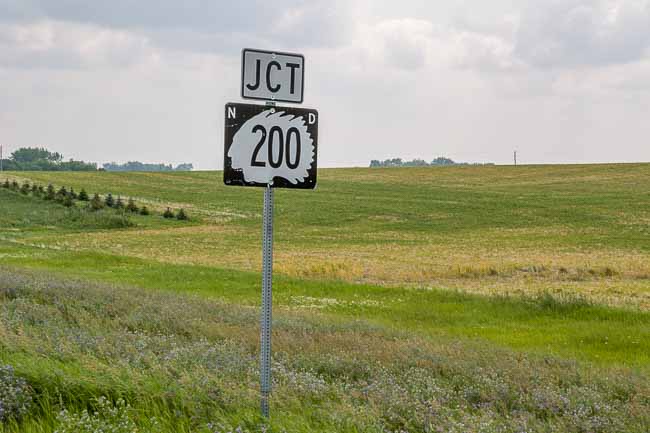 We were impressed by the design of the state highway signs in North Dakota.

The Dakotas take full advantage of all their wide open space with hundreds of billboards along the roadways. Most are the usual effervescent ads for motels, diners, and gas stations. But we also saw a series of billboards that simply said “Smile” or “Be Kind” with no attribution or further explanation. 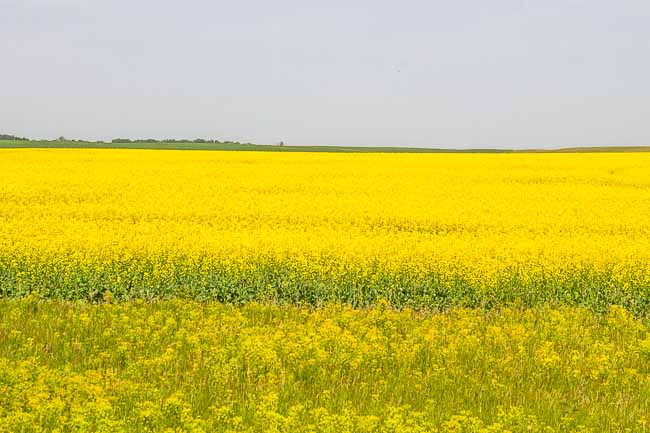 A gorgeous field of canola in North Dakota. 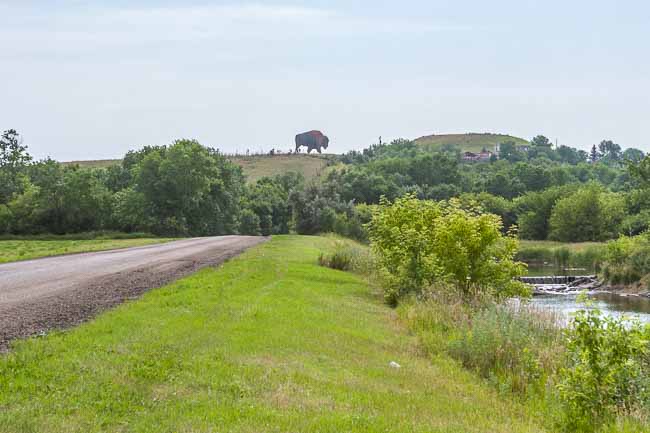 North Dakota also claims to have the world’s biggest bison in Jamestown. We’re not experts, but it was the biggest bison we’ve ever seen. 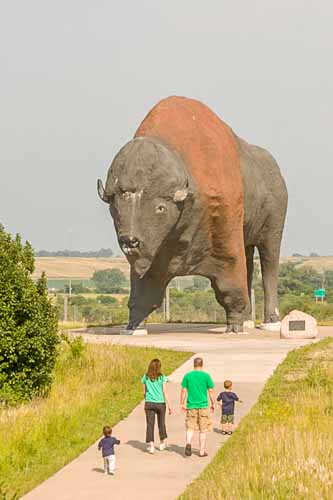 By the time we reached Fargo we’d smashed into so many bugs (or is it the other way around?) that our truck smelled like baked dragonfly. 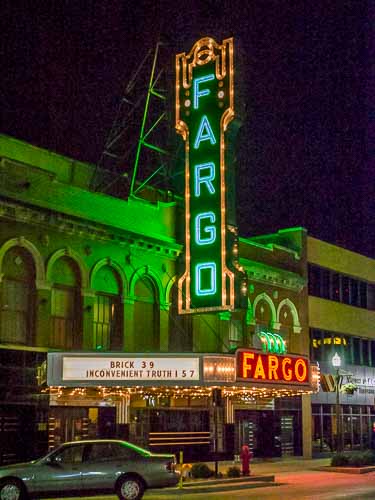 The bright lights of downtown Fargo.

We don’t want to burst your bubble, but that Cohen Brothers movie we all know and love was not filmed in Fargo. Nevertheless, the city turned out to be more divers and bigger than we’d anticipated including a historic downtown area and some beautifully restored neighborhoods. Plus, we arrived on the day Scheels, the self-proclaimed “world’s largest outdoor store”, opened in Fargo. Of course we had to check it out (we could use some more Coleman fuel and dehydrated meals anyway), and it was pretty darn big. Put it this way, there’s a Ferris wheel in the first-floor lobby. 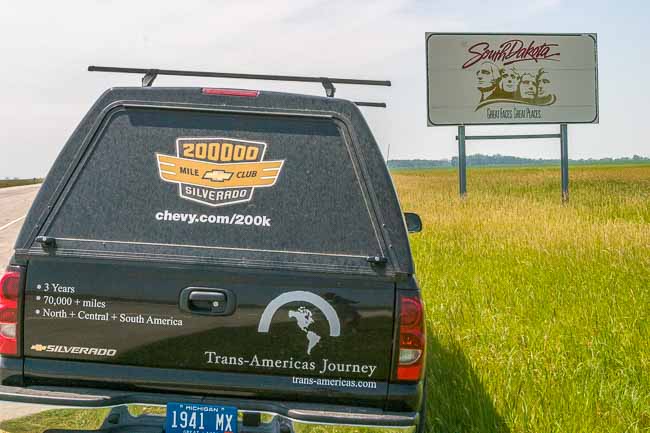 We hit 10,000 miles (16,093 km) in Fargo as well and celebrated by filling our Silverado up with supreme instead of regular.