In many ways it was very hard to leave San Cristóbal de las Casas. But in one way it was very easy: it’s all downhill from there and we were on our way to the views at Cañón del Sumidero and the wild parrots at Sima de las Cotorras via Chiapa de Corzo and Tuxtla Gutiérrez. 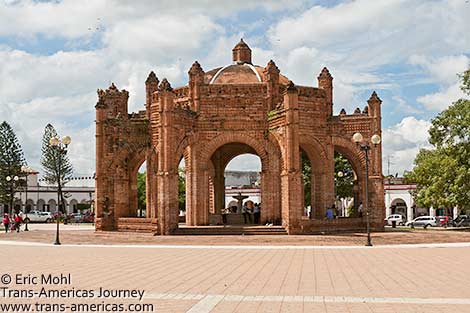 Between San Cristóbal and Tuxtla Gutiérrez the well-maintained road drops 6,000 feet (1,828 meters) via the non-pay highway out of town. We didn’t touch the gas for 20 miles. Heaven.

Our first stop, once we reached the bottom of that massive hill, was the colonial town of Chiapa de Corzo which was charming  but way too expensive for us (a festival was on so hotel prices were all jacked up). We quickly moved on to Tuxtla (no one uses the second half of this city’s name) where we found the biggest hotel values on the Journey so far.

Hotel San Antonio in Tuxtla has four rooms around a small back courtyard that go for 200 pesos (about US$17). Each is spotlessly clean (they have a gadget that dusts the ceiling fan blades and they use it!) with cable TV, a double bed, and a private bathroom.

The courtyard is lovely and the Wi-Fi works. For some reason the rooms upstairs are more expensive (perhaps because they’re larger) but they’re stuffy and dirty and the Wi-Fi signal is weaker up there, so don’t get fooled. If you can get into one of the 200 peso courtyard rooms downstairs you’ve scored.

During an evening stroll around Tuxtla (not much going on) we discovered that the city’s cathedral was brutally “renovated” in the late ’80s and now holds no charm except for the hourly parade of saints out of its clock tower. We ended up at Jardin de la Marimba (Marimba Garden) where a dance festival was taking place featuring fairly aged dancers. Each surprisingly spry troop performed traditional regional dances in traditional regional costumes. Of course the troop representing Chiapas got the loudest applause.

See for yourself in our video, below.

Another Tuxtla bargain? The Miguel Alvarez del Toro Zoo on Mondays when the zoo is free to nationals and foreigners. The zoo is laid out on a sprawling, wooded, shady chunk of land just outside the city and it features a gorgeous black panther and some jaguars, a resplendent quetzal bird and a couple of sadly stuffed harpy eagles, among other things. The enclosures are decent and its a very popular place for families. 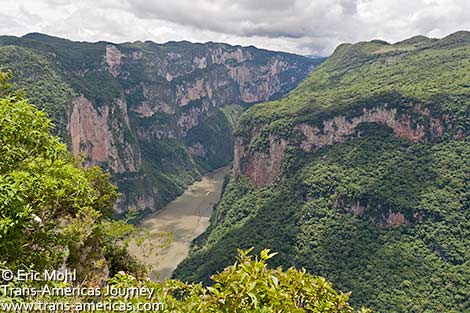 Part of the dramatic canyon that makes up Parque Nacional Cañón del Sumidero in Chiapas, as seen from one of the view points on the rim.

Between Tuxtla and Chiapa de Corzo is the entrance to the Parque Nacional Cañón del Sumidero. We opted out of the pricey and loud motor boat rides up the river at the bottom of this deep, steep canyon and chose to see its massiveness from above from a series of five view points off a central road along the canyon’s rim. 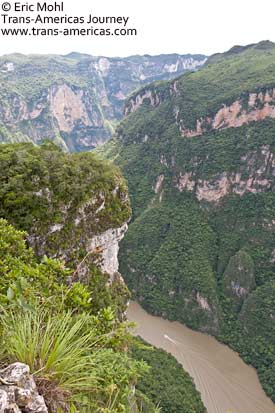 Part of the dramatic canyon that makes up Parque Nacional Cañón del Sumidero in Chiapas, as seen from one of the view points on the rim.

The 10 mile (16 km) road that connects the miradors was as close to a US-style National Park road as we’ve seen since leaving the US: narrow, winding, and full of slow moving buses, passenger cars, and tourist vans full of gawking travelers. The turnouts to the view points had ample parking and there were even paths to the canyon rim. All of the view points except #5 had picnic tables too.

The Sima de las Cortorras is 525 feet wide and 460 feet deep and full of parrots.

From there we headed to Sima de las Cotorras (Abyss of the Parrots), an almost perfectly round sinkhole that’s 525 feet (160 meters) wide and 460 feet (140 meters) deep. That’s amazing enough, but there’s a forest at the bottom of this sinkhole that forest is home to hundreds of green parrots which fly out each morning in one huge group and trickle back in every afternoon. 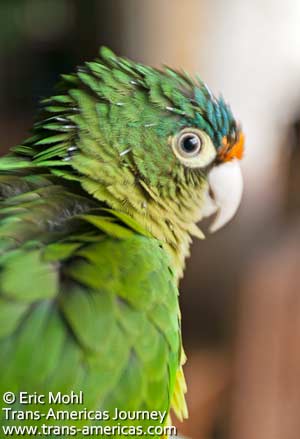 A tame parrot among hundreds of wild ones at Sima de las Cortorras in Chiapas, Mexico.

Tourist facilities around this amazing bird-filled hole in the ground were created with the help of Sendasur, the same orginazation that helped created Las Guacamayas (where the main attraction are scarlet macaws).

At the sima we checked into the small two story stone guesthouse on the property. For 300 pesos (about US$25) we got a charming room with a great bathroom and a private furnished balcony. There are good raised-platform camping sites here too (100 pesos / about US$8) that come with flush toilets and sinks (but no showers). The on-site restaurant also served great food, including some of the best hand made tortillas we’ve had in Mexico.

The pet parrot kept by the folks who run the restaurant loved the tortillas too, as Eric found out. Watch them sharing breakfast in our video, below. 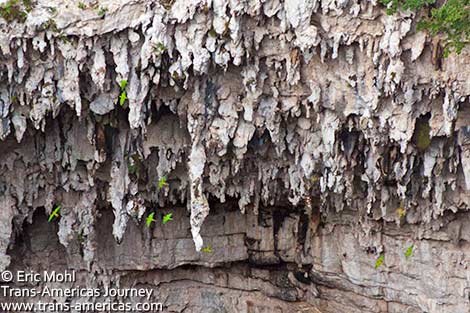 Those bright green specks against the gray karst rock are parrots emerging from the Sima de las Cortorras at dawn.. 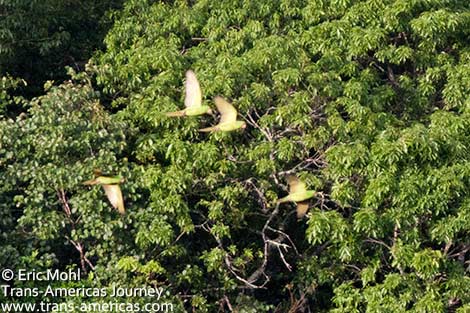 A trail has been built below the rim inside the crater which takes you around the sinkhole. A badass local guide named Nancy will lead you around or even harness you in for a rappel a bit deeper into the ground where you can see more than 40 pre-Hispanic paintings and handprints which were somehow put on the walls more than 200 feet (60 meters) below the rim between 5,000 and 10,000 years ago. 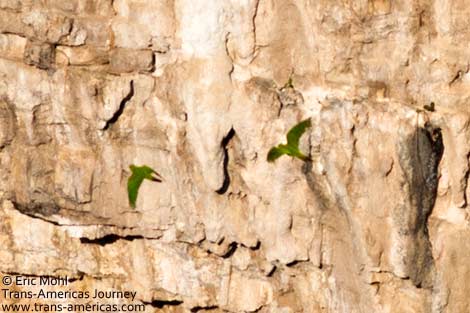 But the real attraction is watching the mass exodus of parrots at sunrise. Around 6 am we heard a tentative “buenos dias” outside our room and that was our cue that the birds were on the move. Sound is amplified inside the sinkhole, so the birds wings and cries sounded extra loud. They flew incredibly quickly (making photography and video tricky in the early morning light). Soon the first handful of birds grew into a crescendo of green wings. 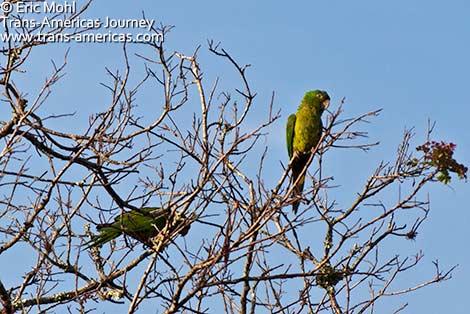 Like the thousands of swifts which saw emerge from the Sótano de las Golondrinas in Aquisimon, Mexico, this mega flight was amazing but brief. Not so amazing? The nearby Aguacera Waterfall. Feel free to skip it and its 25 peso (US$1.25) per person entrance fee. 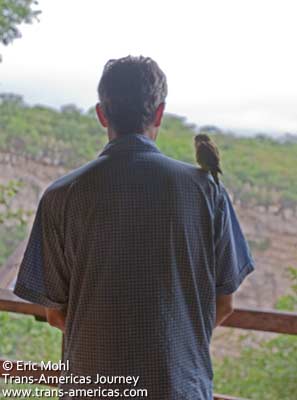 Eric and his fine feathered friend.