Antigua, Guatemala puts on the largest Easter celebration in the Americas. It’s estimated that around 200,000 people flock to this colonial gem of a town every year to watch the colorful Semana Santa (Holy Week) celebrations between Palm Sunday and Easter Sunday.

It’s all a lot more fun if you know your andas from your alfombras so we put together this handy Semana Santa Primer. Consider it a cheat sheet to guide you through our series of posts from Semana Santa in Antigua including adorable kids, elaborate traditional street carpet made out of flowers, and enormous floats in spectacular parades. And don’t miss our video at the bottom of this post. It’s full of highlights from Palm Sunday in Antigua. 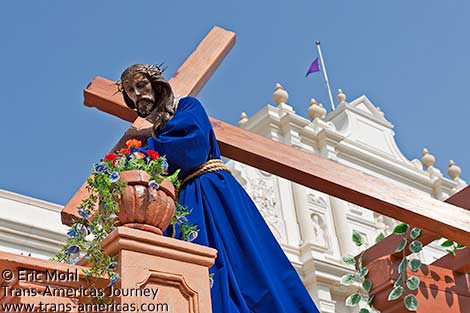 Just one of the floats, or andas, which are carried during Semana Santa processions in Antigua, Guatemala.

How to speak Semana Santa

SEMANA SANTA – The Spanish phrase for Holy Week which runs from Palm Sunday through Easter Sunday.

CUARESMA – The Spanish word for Lent, which is celebrated in Antigua with processions every weekend for the five weeks leading up to Semana Santa. If you can’t make it to Antigua for Easter week (or if you can’t get a hotel room in town over Holy Week), you can still catch one of Antigua’s Lent processions.

PASQUA – The Spanish word for Easter. 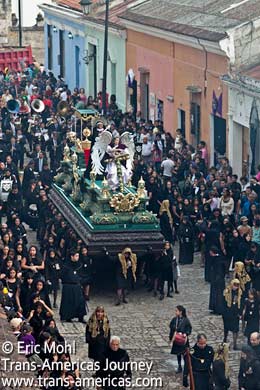 PROCESSION – A religious parade which always leaves from and returns to a specific church. Processions tell the story of Jesus’ crucifixion and resurrection using elaborate floats (called andas, see below) full of iconography. More than a dozen major processions (and many smaller processions) take place day and night in Antigua during Semana Santa. We managed to attend 12 of them. The procession tradition is said to have started in Guatemala in 1524 and, today, most Semana Santa processions include two main andas. The first carries a scene from the life of Jesus. The second carries a depiction of the Virgin Mary. Each procession is named after the specific Jesus and Mary that adorn the floats (i.e. Jesús De La Merced, Jesús El Peregrino, Jesús Del Milagro).  Some last for 15 hours and cover many miles.

An anda in a Semana Santa procession in Antigua, Guatemala.

ANDA – An enormous hand-crafted wooden float which weighs up to 8,000 pounds (3,600 kilos) and is carried by up to 100 people. Dozens of andas are paraded around town during Semana Santa and each carries a different tableau on top depicting a scene from the story of Jesus’ crucifixion. These scenes are changed every year, but their meaning remains the same. Some of the andas are antiques and some are new. Each church has their own own anda of varying sizes and the main characters from the andas (Jesus, etc) spend the rest of the year in niches in their home churches. The andas are lit during night processions when people push generators along the procession route behind the floats. 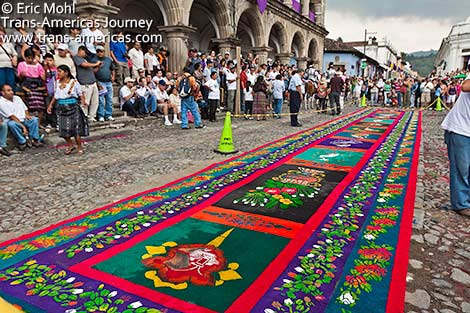 An alfombra during Semana Santa in Antigua, Guatemala. 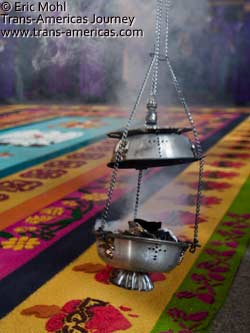 ALFOMBRA – This is the Spanish word for “carpet” and that’s exactly what these temporary pieces of street art are meant to be–fancy carpets which pave the way for the andas in each procession. People spend as much as they can on alfombra ingredients which include flowers, luridly dyed wood shavings and sawdust, fruits and vegetables, even glitter and tiny Noah’s Arcs. Some are hand-made and, thus, imperfect. Others are created meticulously using stencil cut outs and exact measurements. We found ones to love in all styles. Alfombras are typically created by an entire extended family on the cobblestone street in front of their home but local businesses create alfombras too. See more alfombras. 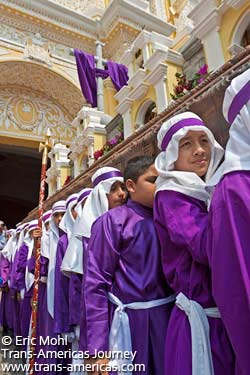 Purple is the color of Semana Santa in Antigua, Guatemala.

COPAL – A natural tree resin which is burned as incense by men and boys swinging incense burners in front of the main anda. Processions on Saturday seem to have the most incense. Our theory is that on Saturday processions only include one anda with Mary on top (Jesus is not included because he’s been crucified and not yet risen). The Saturday andas are carried exclusively by women which leaves many men looking for a role to play in the processions so they grab incense burners.

PURPLE – During the first half of Semana Santa hundreds of men in Antigua put on a silky purple tunic and sash with a head dress or hood (some hoods look disturbingly like KKK hats, but they’ve got nothing to do with racism). Why purple? Because it is the liturgical color of Lent and some believe it symbolizes Jesus’ pain and suffering and emulates the color of a robe that covered Jesus.  The costume switches to all black on Good Friday afternoon following Jesus’ crucifixion. 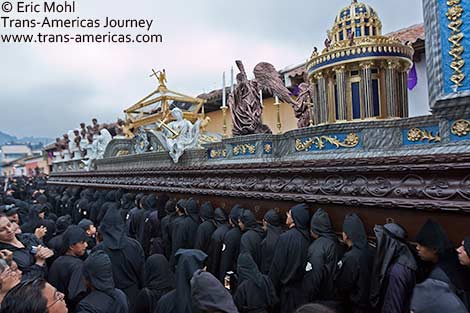 A viernes santos procession during Semana Santa in Antigua, Guatemala.

VIERNES SANTO – We’re not sure why it’s called “Holy” Friday or “Good” Friday since this is the day on which Jesus was crucified. We can tell you that Semana Santa celebrations in Antigua reach their peak on Viernes Santo (not on Easter Sunday) with four major processions in town and very large crowds. The action starts at midnight on Thursday with the Peregon de Romanos (parade of Romans). Some processions begin at 4 am on Friday morning and some don’t finish until 6 am Saturday morning. Graphic and emotional re-enactments of the crucifixion of Jesus also take place inside churches on Viernes Santo and by 3 pm everyone has changed out of their purple clothes and into black clothes in mourning for the crucified Jesus. 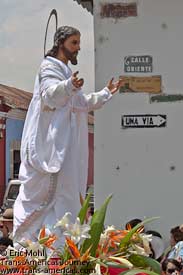 EASTER SUNDAY – The day Jesus is said to have risen from the dead marks the end of Semana Santa but Easter Sunday is not the peak of the celebrations. That honor goes to Good Friday. Processions on Easter Sunday have a celebratory vibe with fireworks, people waving yellow and white flags and confetti in the air. 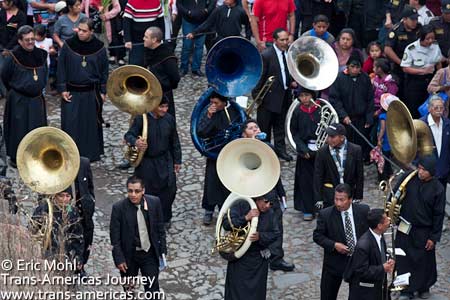 One of the marchas funebras during Semana Santa in Antigua, Guatemala.

MARCHAS FUNEBRAS –  This is the Spanish phrase for funeral marches. Music plays a big role in Semana Santa processions, cueing various actions and setting an appropriately somber mood. The procession bands (which are paid to perform), are heavy on drums, brass and wind instruments and they play a repertoire of more than 100 marchas funebras, mostly written by Guatemalan composers. Some bands throw in a Chopin tune now and then for variety. After a few days we began recognizing some of the songs in heavy rotation. The sound is not unlike the brass bands associated with classic New Orleans second-line funeral processions and we’ve got back up on this one. Dr. Tom Tunks, a Professor of Music at Southern Methodist University in Texas, has lived in New Orleans and has taught jazz musicians from the legendary Marsalis family, was also in town for Semana Santa and he agrees that some of the marchas funebras bear a passing resemblance to dirges played by brass bands during second-lines in New Orleans. 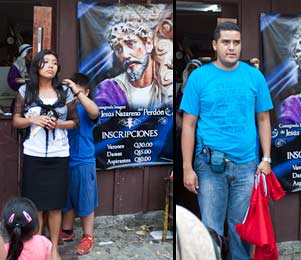 People signing up and getting measured so they can help carry an enormous wooden float on their shoulders during an Easter parade in Antigua, Guatemala.

CUCURUCHOS and CARGADORAS – These are the men and women, respectively, who carry the andas. Each pays about 30 quetzales (roughly US$4) to their church for the privilege. Children, who carry smaller andas in their own special processions, pay less. 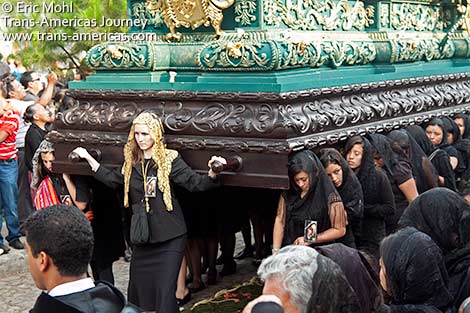 Women carrying an anda in a Semana Santa procession in Antigua, Guatemala.

Only men carry andas with Jesus on them and these can weigh up to 8,000 pounds and require 100 men. Only women carry andas with the Virgin Mary on them and these can weigh up to 3,000 pounds (3,628 kilos). During each processions, these enormous andas are carefully choreographed along specific routes through city streets, around tight corners and over an obstacle course of cobblestones and flower-and-vegetable-strewn alfombras. Originally done as penance with the faces of the bearers covered, it’s now clearly an honor to carry the load of an anda. Every carrier gets measured to ensure that each group of 40-100  bearers is of relatively the same height. You can imagine what would happen if the heights varied too much. It’s also said that the tallest bearers get the honor of carrying the anda out of the church. Or maybe it’s a challenge. Often the anda is already so tall that the bearers have to carry it while squatting in order to ease it out the door. Some andas have to exit on rails and get picked up once outside the church. Bearers usually carry their anda for one block then an artful switch is made. Many come back to carry again later in the procession. 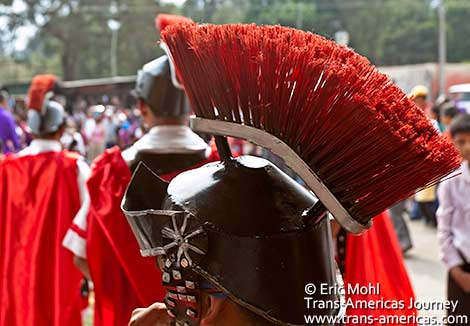 A man dressed as a Roman during Semana Santa in Antigua, Guatemala.

ROMA – What would the crucifixion story be without Roman centurions? Many men and boys play this role and march ahead of the main anda in processions wearing fairly elaborate costumes which include armor and capes and menacing spears. Though it’s hard to look too tough when your helmet is topped by a bright red broom… 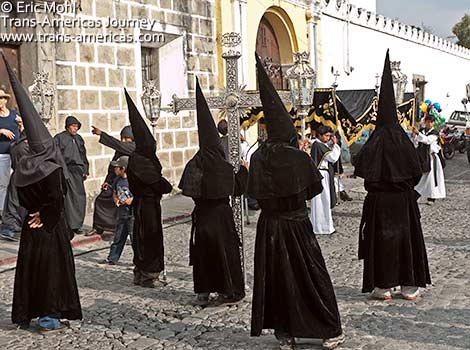 Those are not KKK hoods.

WHAT’S WITH THE KKK HOODS? –  Some of the Semana Santa costumes feature tall pointed hats that cover the men’s faces. Yes, they look disturbingly like part of the KKK costume but these versions have nothing to do with hateful racists. They’ve been worn by Catholic Brotherhoods in Europe for hundreds of years and are seen in Semana Santa celebrations throughout the world.

Here’s our video of some of the processions on Palm Sunday in the daytime and in the nighttime: