As if Mexico City didn’t have enough museums, attractions in and around the centro historico, delicious tacos and cool neighborhoods to keep us busy for weeks, the city is also within easy day trip distance of other fascinating things to do and see. Here’s our city travel guide covering the best day trips around Mexico City including the Xochimilco Canals, the Basilica of Guadalupe, art on the UNAM campus, and much more. 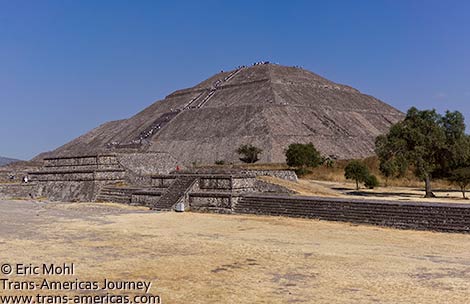 The pre-Hispanic Teotihuchan Aztec archaeological site, located about 25 miles (40 km) from Mexico City, was first opened to the public 100 years ago and millions of people have toured the massive complex, known as The Place Where the Gods Were Created. Despite the site’s long history of archeological exploration new discoveries are still being made. Just this year a 400 foot long tunnel that’s believed to be nearly 2,000 years old was unearthed at this UNESCO World Heritage Site. 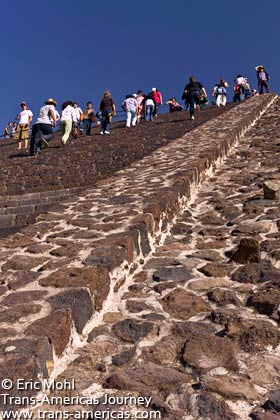 It’s a long, hot, steep climb up the Pyramid of the Sun at Teotihuacan near Mexico City.

A visit to Teotihuacan can easily take three hours and be prepared for dusty, hot, shade-free conditions and some steep climbs up the nearly 250 foot (75 meter) high Pyramid of the Sun and only slightly smaller Pyramid of the Moon. Though some Mexican women do it in heels we highly recommend sensible shoes. 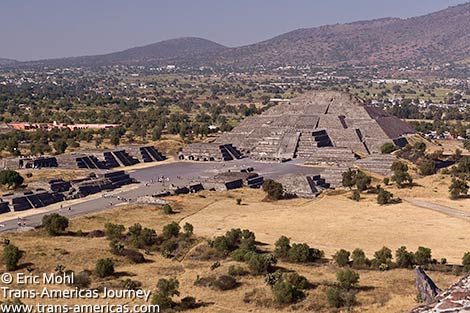 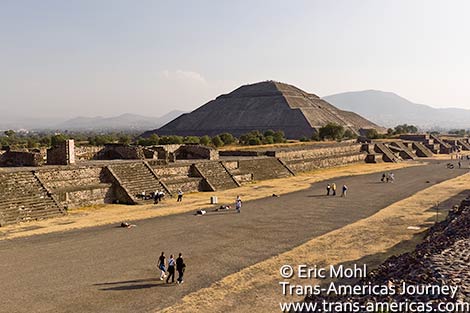 Looking down the Avenue of the Dead with the Pyramid of the Sun in the background at Teotihuacan near Mexico City..

A controversial Resplandor Teotihuacano sound and light show is also put on at Teotihuacan but, thankfully, plans to build a Walmart on a section of the ancient city appear to have been defeated.

The Basilica of Our Lady of Guadalupe 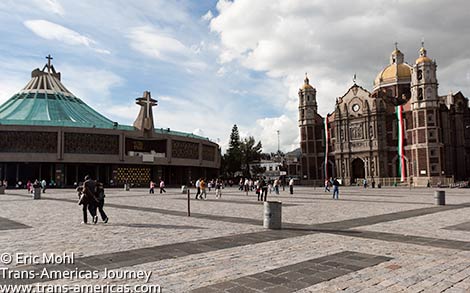 The weirdly modern looking new Basilica of Our Lady of Guadalupe (left) next to the old basilica which is literally sinking into the ground under its own weight.

Welcome to the world’s most visited Catholic site. Yep, more people come to the Basilica of Our Lady of Guadalupe, a short bus/metro ride from the city center, than any other catholic shrine in the world. It’s estimated that around 20 million people a year visit the Basilica. Even Pope John Paul came here and his Mexican Popemobile is still on display. 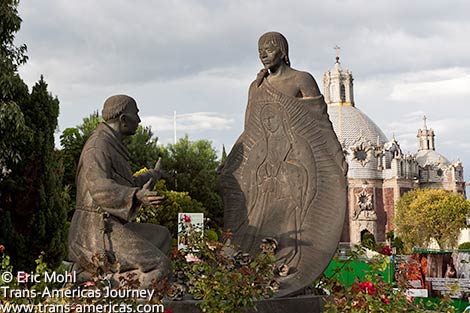 This statue on the grounds of the Basilica of Our Lady of Guadalupe shows Juan Diego showing the bishop the miracle of the Virgin of Guadalupe’s image printed onto his shepherd’s clothes.

The Basilica is impossibly packed during the annual Festival of Our Lady of Guadalupe which happens every year in December. The festival marks the time of year when, in 1531, the dark-skinned Virgin of Guadalupe is said to have first appeared to an Aztec shepherd named Juan Diego, eventually proving her existence and her miraculous powers by imprinting an image of herself onto his clothes.

This leads us to the main reason the faithful (and the curious) flock to the Basilica. The actual tilma or apron that Diego was wearing at the time of his encounter with the virgin is said to be exhibited in the weirdly modern new Basilica which was built after it was discovered that the elegant, stately original stone basilica is literally sinking under its own weight. The old basilica was closed for repairs for a while but it’s open now and despite engineer’s best efforts you still walk uphill into the sagging church when you cross the threshold. 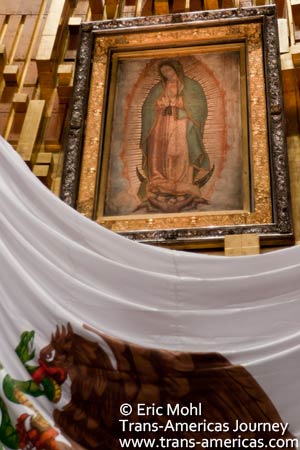 Relic or not, this framed image of the Virgin of Guadalupe underneath the altar in the new Basilica of our Lady of Guadalupe near Mexico City attracts millions of the faithful plus a few of the just plain curious.

But we digress. Back to the miracle shroud. What’s said to be Diego’s actual tilma bearing the actual image of the Virgin seared there in 1531 is framed and hung on a wall underneath the altar in the new basilica. Moving sidewalks slowly ferry people from left to right, then right to left in front of the relic. Tears flow, cameras snap, eyebrows raise. 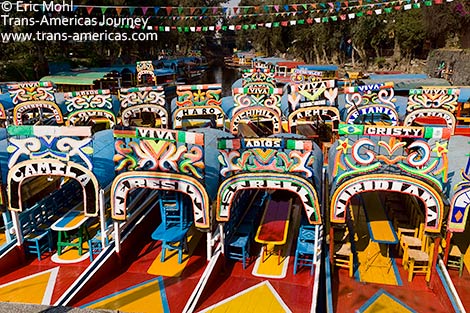 Mexico City is built on a swamp which was originally tamed by the Aztecs using a clever network of canals and bridges. Today, most of the Mexico City valley has been reclaimed as solid ground, but 17 miles (27 km) to the south in the town of Xochimilco you can still experience the original Aztec watery ways. 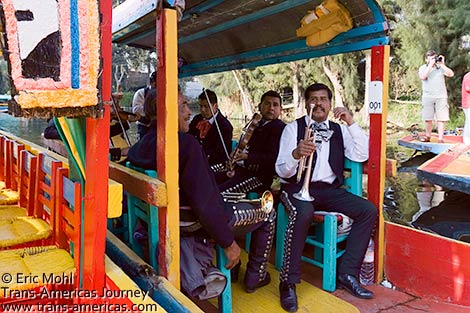 Mariachis on a trajinera on the Xochimilco canals give new meaning to the term “roving minstrel.”

Here, brightly painted hand-propelled boats called trejineras ply the waters taking tourists and locals alike through a network of calm waterways that make up this UNESCO World Heritage Site. Food and beer and trinket vendors sidle up in their own boats as do mariachis eager for a commission. It’s a festive atmosphere best shared with family and friends. 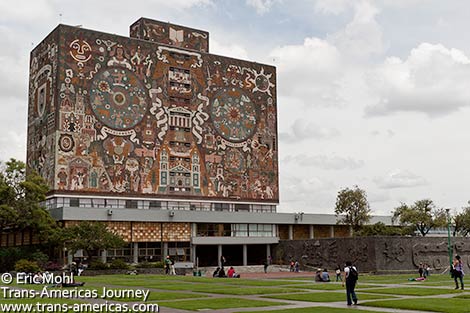 The Central Library on the UNAM campus in Mexico City is covered in mosaics by Juan O’Gorman.

The full name of this massive campus is the National Autonomous University of Mexico (Universidad Nacional Autonoma de Mexico in Spanish). Whatever you call it, this is widely considered to be the best university in Latin America. At least seven Mexican Presidents, and other assorted political figures, have attended UNAM plus big Mexican literary figures and, weirdly, William F. Buckley who attended UNAM in 1943. 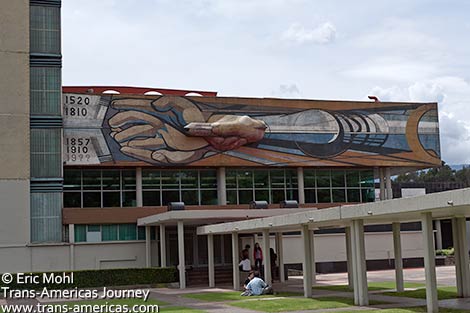 Torre de Rectoria on the UNAM campus in Mexico City is covered in murals by David Alfaro Siqueiros. This one, “Las fechas de las historia de Mexico” (The dates of Mexico’s histsory) includes dates representing key events in Mexican history: 1520 (the Spanish conquest), 1810 (independence from Spain), 1857 (writing of the constitution) and 1910 (the Mexican revolution). The final date simply reads “19??.”

UNAM is 100 years old this year and the main campus, a UNESCO World Heritage site, dates back to the 1950s. The campus earned UNESCO status in large part because of the stunning convergence of architecture and art. The campus was designed by Mexican architects Mario Pani and Enrique del Moral but its vaguely revolutionary, certainly progressive look and feel can be credited to a much larger group of creative types whom the architects collaborated with including sixty engineers and artists like David Alfaro Siquieros, Diego Rivera and Juan O’Gorman.

UNAM is also home to Olympic Stadium which was  built in 1956 and which hosted the tumultuous 1968 Summer Olympics.

Complete your Mexico City travel planning with our complete travel guide to Mexico City which covers museums, hotels, eating, neighborhoods, and much more.