North of Huehuetenango the Sierra de las Cuchumatanes mountains, the highest non-volcanic range in Central America, rise into the sky. This spectacular bit of Guatemala is home to high altitude plateaus, tiny windswept villages, and a naturally infinity-edged lake that almost no one visits. The Cuchumatanes are also home to two community tourism guest houses that get you into the terrain and into the culture. 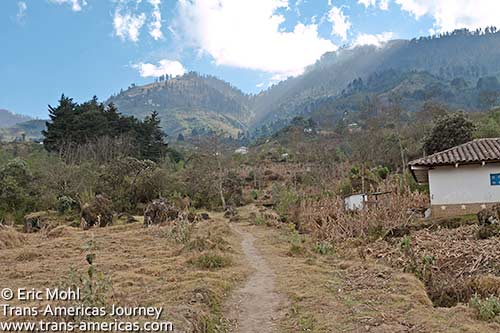 The Sierra de las Cuchumatanes mountains, the highest non-volcanic range in Central America, rise up behind a village in Guatemala.

The blink-and-you’ll-miss-it village of Chiabal is perched on a wide, sheep-speckled plateau at nearly 11,000 feet (3,352 meters). From here the road drops down into Todos Santos roughly 45 minutes away. Travelers headed to Todos Santos probably don’t even notice this wide (and windy) spot in the road, however, Chiabal makes a great base camp for anyone interested in the non-technical hike up La Torre, the highest non-volcanic peak in Central America at 12,588 feet (3,837 meters). 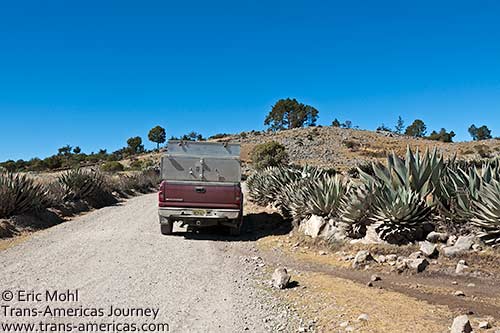 Villagers that live in the high-altitude plateaus of Guatemala’s Cuchumatanes mountains ingeniously use magay plants as fencing.

There is a small cluster of wood and stone cabañas in Chiabal. It’s not luxury, but the dorm-style, shared bathroom cabañas for up to six people are well-built and well situated (233Q, or about US$30, per person per day includes accommodation, three meals, and a local guide for the Piedras Cuache trail, add 25Q per person for a guide up La Torre). For more information or to make reservations, call Esteban Matías at +502-5381 0540.

Golden, wind-swept, high-altitude meadows punctuated by random rocky outcrops in front of a brilliant blue sky backdrop convinced us that the Cuchumatanes mountains were the most beautiful natural place in Guatemala, so we didn’t really mind being pretty much totally lost as we tried to find Laguna Magdalena. 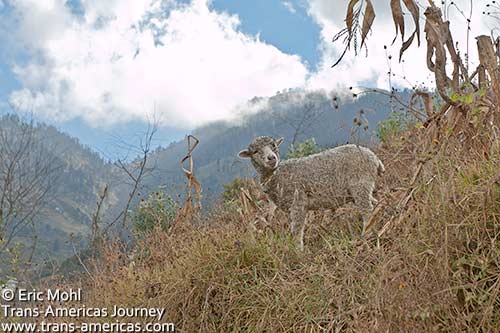 It’s easy to get the impression that there are more sheep than people in the Sierra de las Cuchumatanes mountains in Guatemala.

The scenery just got more and more gorgeous the closer we got to the lake. At least we hoped we were getting closer. With a terminal scarcity of signs and an even greater scarcity of people (there are more sheep than humans up here) we drove around and hoped we were on the right track for more than an hour. With luck, we got near the lake then came across some locals who happily gave us directions. They were obviously proud of the lake and even prouder that someone was coming to see it. A shocking number of them also spoke perfect English–left over from time spent working in the United States. 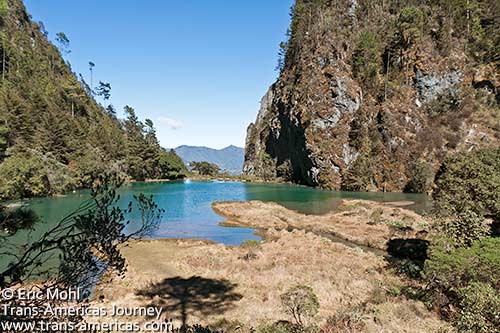 Laguna Magdalena was worth all the effort. A lovely trail winds down from the dirt road to the lake itself and after about 10 minutes we reached the water which has a natural infinity-edge formation that makes it seem like the petite lake (more of a pond) is spilling into oblivion. Fancy hotels and resorts pay thousands to get the effect which mother nature has achieved here for free. 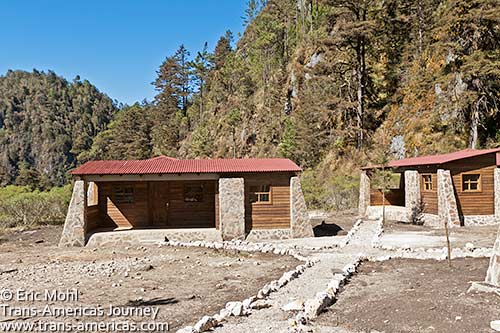 Bungalows built as part of a community tourism project at Laguna Magadalena in the Sierra de las Cuchumatanes mountains in Guatemala.

A community tourism project at Laguna Magdalena offers six river stone and wood cabañas a short distance above the lake itself (155Q, or about US$20, per person per day for accommodation, three meals per day, and a local guide). For more information, contact Fabiola Rojas at [email protected] (dot) com or call +502 5378 0849.

We were also tempted to camp at the lake in one of two large gazebos (one at the lake, another slightly above it) but at 10,000 feet (3,048 meters) and a posted ban on campfires we were afraid we’d be too cold.

It’s not all open spaces in the Cuchumatanaes. On the other end of the mountain range lie towns like Nebaj (which we found dusty and uninteresting) and small villages exist up here too, including the Ixil Mayan town of Chajul. Heavily targeted during Guatemala’s merciless 36 year civil war, Chajul today has a languid market populated primarily by women in bright huipils (traditional, hand made boxy shirts). 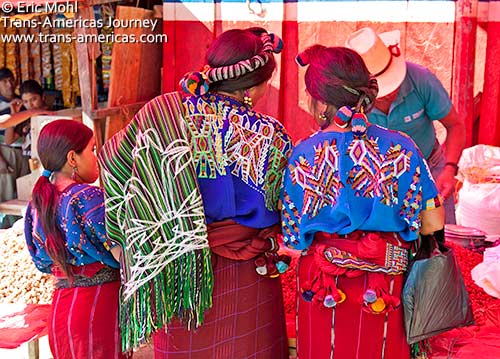 Women on market day in the town of Chajul sporting typically bright indigenous dress. Their own special touch is the head wrap with pompoms on the ends.

The most distinctive elements of the indigenous outfit in Chajul are colorful lengths of hand-loomed fabric wrapped around the women’s heads with fluffy pompoms on either end. It makes their heads look like festively-wrapped gifts. 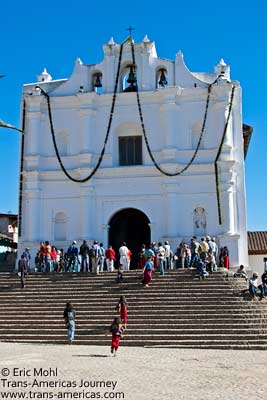 The church in Chajul, a small town in the Sierra de las Cuchumatanes mountains in Guatemala.

We were told of a guesthouse in Chajul called Posada Xalkat which was built by an NGO. When we finally found the guest house (it’s below town) it looked lovely but, sadly, no one was around to open it up. Perhaps yet another example of good intentions (NGO support) with a fatal lack follow up (no one on staff). A pity, since Chajul offered up some of the most remarkable clothing, color, and (unsinkable) culture in the Cuchumatanes and is certainly worth a visit. 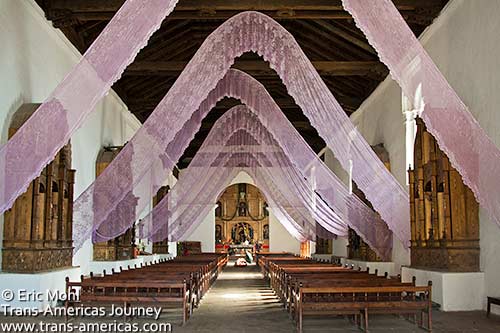 Inside the church in Chajul. 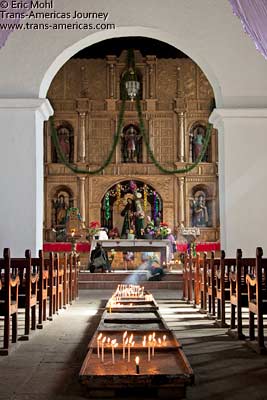 Traditional Mayan rituals and Catholic customs mix inside the church in Chajul.