The mountains north of Managua are home to more than just Matagalpa. Unwilling to leave the cool weather at these higher elevations we lingered in the hills traveling to the Chaguitillo petroglyphs (with an unexpected horse parade thrown in for good measure), Selva Negra Ecolodge (where we narrowly escaped a coral snake and a falling tree limb) and the caffeinated yet somehow sleepy town of Jinotega. 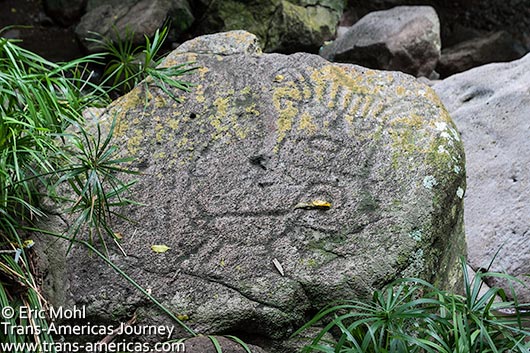 River side petroglyphs in the town of Chaguitillo, Nicaragua.

There is a museum in the town of Chaguitillo which displays the many pre-Columbian artifacts which have been found in the area. However, when we visited the town we went straight to the river where we saw large petroglyphs (ancient stone carvings) right along the banks next to swimming children and women doing their laundry. Talk about living history. We probably couldn’t have gotten to the museum anyway since Chaguitillo was busy hosting a major celebration and a huge parade of horses had taken over the streets. 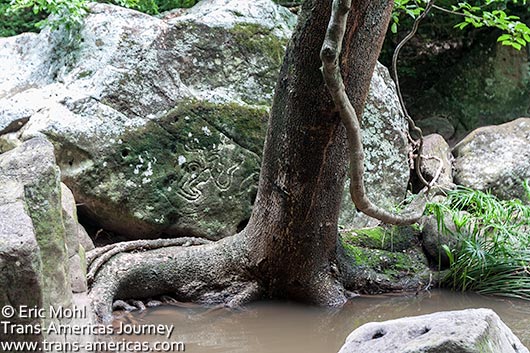 River side petroglyphs in the town of Chaguitillo, Nicaragua.

You can visit Selva Negra Ecolodge coffee plantation and farm, about 15 minutes north of Matagalpa, as a day trip for a tour of their coffee operation which produces 400,000 pounds (182,000 kilos) of organic Arabica beans a year, hydroponic and organic garden, flower farm, dairy and cheese making facility, and excellent German/Nica restaurant (don’t miss the schnitzel), but why not stay a night or two? That way you get to enjoy Selva Negra’s rambling array of accommodations–from cottages to hotel rooms–on-site chapel, pine forest, and network of hiking trails through some of their 400 acre (160 hectare) property. 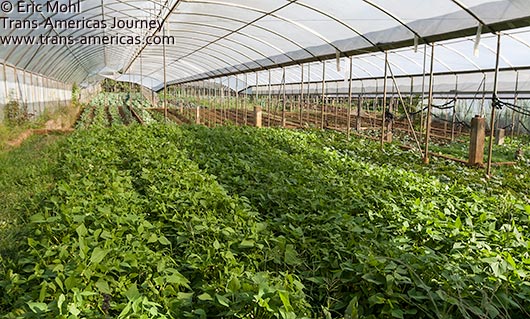 Part of the organic farm at Selva Negra Ecolodge in Nicaragua.

The Kuhl family, a German clan that’s owned Selva Negra Ecolodge since 1975, is serious about the “eco” part of the name with green measures including the use of eucalyptus and papaya as natural pesticides on the farm, bio gas is produced from waste products and used to fuel the workers’ kitchens, there’s a massive earthworm composting operation and they even hope to add a windmill and get off the grid entirely. 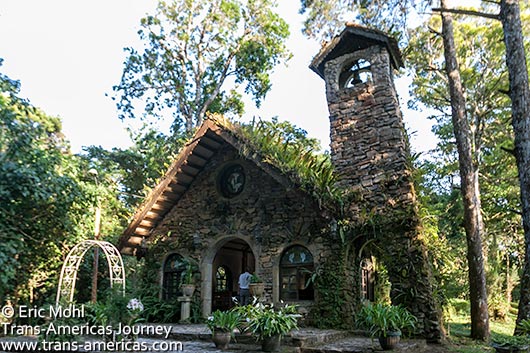 The chapel at Selva Negra Ecolodge in Nicaragua.

There’s a large network of trails through Selva Negra’s hilly property. We spent a morning exploring some of them, hiking up and down extreme, slippery slopes (we may have wandered off trail once or twice in search of the sounds of bell birds and howler monkeys). Then it started to pour making the ground even more treacherous. 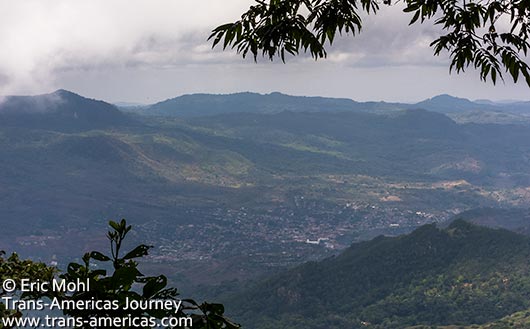 The view down to the town of Matagalpa from one of the hilltop trails on the property of Selva Negra Ecolodge.

By the time we’d hiked/slid down the trail to flat ground we were wet and muddy. As we walked along the final stretch of trail leading back to the lodge a five foot (1.5 meter) very venomous coral snake slithered across the trail in front of us.

As our heart rates were returning to normal the wind suddenly picked up and we heard an ominous cracking noise above us. We both instinctively ran as a big tree limb came crashing down on the trail behind us. But, yeah, come and hike. Just maybe not in a rain and wind storm. 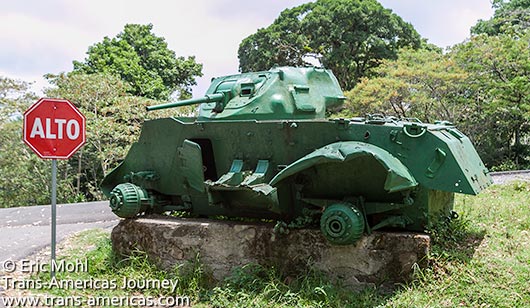 You can’t miss the old tank which marks the turn off to Selva Negra Ecolodge in Nicaragua.

The coffee-laced charms of Jinotega

It’s not likely that Jinotega will make it to the top of anyone’s travel hot list. The area saw intense fighting between the Sandinistas and occupying American troops between 1927 and 1934 and in the 1970s the area was devastated again during battles between troops controlled by President Anastasio Somoza vs. a civilian rebellion. Somoza was defeated on July 19, 1979 but in the 1980s fresh battles broke out between the new Sandinistas and CIA-backed contras.

Today Jinotega, which is known as La Ciudad de las Brumas (City of Mists) and La Ciudad de los Hombres Eternos (City of Eternal Men), is calm. What it lacks in major tourist attractions it makes up for in peace, quite, and coffee. 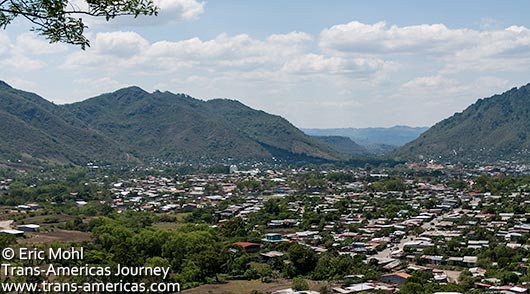 Coffee, not Contras, are what Jinotega, Nicaragua is known for these days.

We were surprised to find Hotel Café where owner Maria Teresa, who also owns Hotel Estancia La Casona in Managua, has created a stylish, homey, well-appointed haven in Jinotega. Another pleasant surprise in Jinotega was the town’s tasty, cheap eats.

Don’t miss Soda el Tico which had some of the best steam table fare we had in all of Nicaragua (much of the budget food in Nica is served to you by ladies at a huge steam table full of choices). We had fantastic beef with home made chimichurri sauce, moist chicken kababs, and delicious fresh maracuya (passion fruit) juice for just a few bucks. There’s even some good street food in Jinotega and readers of this travel blog know how we feel about street food.

At the entrance to the town cemetery you’ll find La Taberna. Head inside the building that’s adorned with river stones and you’ll find a dimly lit bar with bark-paneled walls, raw wood furniture, an ecclectic sound track (from Lady Gaga to Enrique lgesias), and a lively crowd of locals who come for all of that plus ice cold beer. 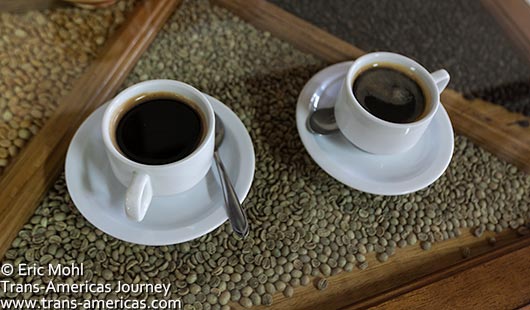 Of course, there’s awesome coffee in Jinotega too. The department of Jinotega (essentially a county) produces almost all of the Nicaraguan coffee. Our favorite cafe in Jinotega was Casa de Don Colocha which got our vote not for its coffee (which is great and comes out of a real Italian machine and they even have iced coffee) but for serving the best cinnamon roll in Central America.