In a recent post we told you about some of the best places to stay and eat in chilled out El Remate which, along with Flores, is one of two main base camps for travelers headed to the thoroughly awesome Tikal archaeological site. Here’s what you need to know about Flores. 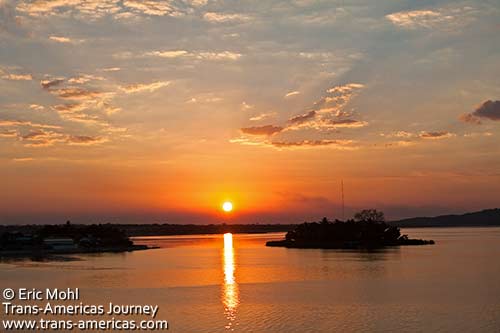 Sunset over Lake Peten Itza as seen from Flores, Guatemala.

Despite (or maybe because of) the fact that Flores is the larger, more established of the two base camp options we found less to rave about in Flores than we did in El Remate. Yes, it’s a bit of a thrill to stay in a town that’s an island unto itself (a short causeway connects Flores to the bustling, dusty “mainland” town of Santa Elena). And the sunsets over the branch of Lake Peten Itza that wraps itself around Flores are spectacular (though the water was weirdly murky and unsatisfyingly warm when we were there).

What we certainly can rave about in Flores is Hotel Casa Amelia (280Q, about US$35, double). There are a lot of hotels in Flores but you can’t miss the bright green shutters of this lakeside hotel that opened in 2005 in what used to be the family’s home. The owners kindly hosted us while we were in Flores and we loved watching sunset from the roof deck and the Wi-Fi connection. The great staff even babysat our truck while we spent a week trekking to and from El Mirador archaeological site. 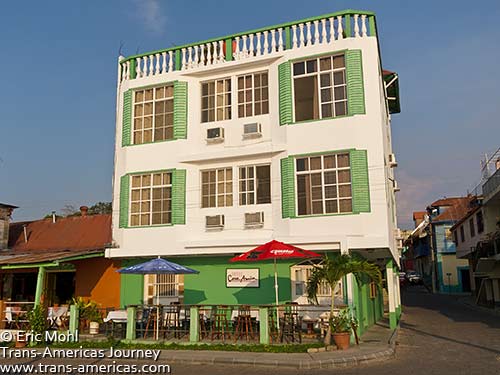 Hotel Casa Amelia, right on the lake in Flores, Guatemala.

While there are many hotel options in Flores, finding someplace to eat was more of a challenge. We do agree that traveler favorite Cool Beans is an excellent place for big, delicious breakfasts (including homemade bread) and great coffee. But we had a  harder time finding budget lunch or dinner options.

After a few days in town we stumbled upon a man barbecuing chicken and beef on the street between the Gran Hotel de la Isla and the causeway and his 28Q (about US$3) plates with grilled chicken or beef, fresh salad, and fries were good and good value.

And for a worthy splurge we can recommend La Albahaca. Albahaca is the Spanish word for basil and they know what to do with it at this corner cafe (open after 6pm Monday to Saturday) just around the corner from Hotel Casa Amelia. We had some of the best pesto sauce we’ve ever had here over a plate full of homemade fettuccine for 45Q (about US$5.75). The homemade bread and herb butter was a treat too. 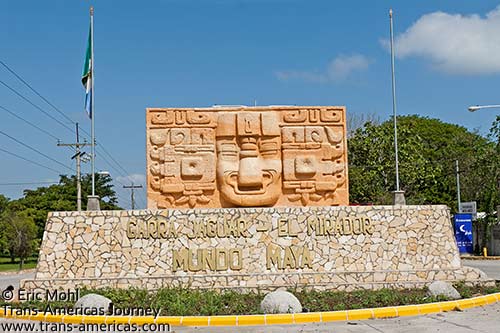 A replica of a Mayan mask discovered at the El Mirador archaeological site greets visitors to Santa Elena, Guatemala.