We arrived on Ometepe Island in Nicaragua like most travelers do: pretty unaware of the range of eco, outdoor, and food adventures that have been quietly developing on this spot in the middle of Lake Nicaragua.

Ometepe Island’s name translates to “two hills” for the pair of volcanoes that dominate its geography. That’s Concepción on the left and Maderas on the right.

Ometepe Island is a 3,000 square mile (8,264 square km) UNESCO Biosphere Reserve in formerly bull-shark-infested Lake Nicaragua (aka Lake Cocibolca) which is the largest lake in Central America.  The island’s name means two hills in the Nahuatl language and those “hills” are actually two volcanoes: the very active 5,100 foot (1,544 meter) Concepción Volcano and the dormant 4,573 foot (1,394 meter) Maderas Volcano. Both can be climbed. Neither is easy. 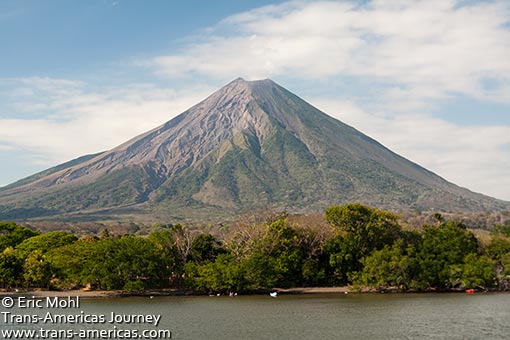 You can climb Concepción Volcano on Nicaragua’s Ometepe Island even though it’s still active.

Getting to Ometepe Island

While the rest of Nicaragua slowly gets its act together in terms of tourism and tourist activities, things on Ometepe have been moving right along. They even have a brand new international airport, though no one seems able to say when it will open to flights–if ever. Welcome to Nicaragua. 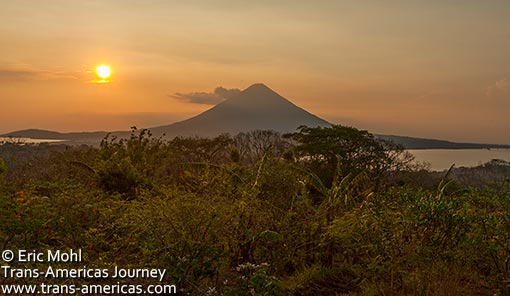 Never mind. You can still get to Ometepe Island the old-fashioned way: by ferry. Passenger ferries leave from a large dock in the town of San Jorge just a few miles from Rivas. A number of ferries travel between the dock and the island. We chose to travel on the newer, bigger Rey del Cocibolca ferry because it also takes vehicles (US$16 for one driver and the vehicle; US$3.50 per passenger). 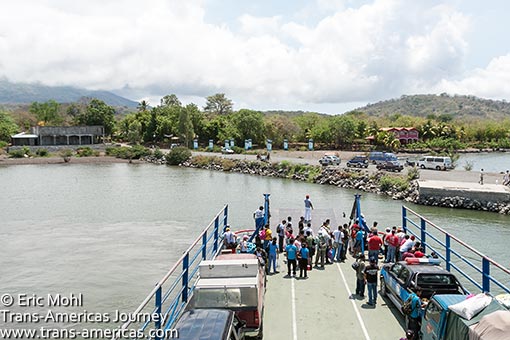 Taking a ferry across Lake Cocibolco (aka Lake Nicaragua) to Ometepe Island. You can see our truck at the front of the line on the left on the cargo deck.

The ferry was clean and only moderately crowded (though the vehicle deck can get packed so if you have a vehicle make a reservation by calling 8833-4773 or 86913669). Our one-hour crossing was pretty smooth, though locals will tell you that the lake can sometimes get whipped up to white caps due to high winds.

Getting around Ometepe Island

The roads on Ometepe were notoriously bad but a recent frenzy of repaving with interlocking pre-fab paving stones is slowly changing that. When we were on the island the road connecting the main port town of Moyogalpa and the village of Balgue was in perfect condition and crews and supplies were in place to continue extending the repaving.

The island is big–19 miles (31 km) long and up to 6 miles (10 km) wide–and the things you’re gonna want to do, see and eat are spread out. If you don’t have a vehicle you can use public buses or rent a motorcycle from many shops and vendors in Moyogalpa. 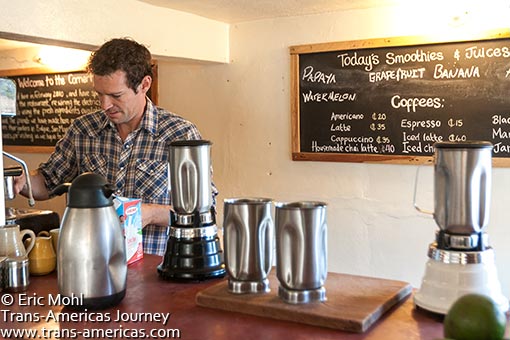 Gary Long, co-owner of Cornerhouse B&B, Restaurant and Coffee House in the town of Moyogalpa, is your source for good travel advice about Ometepe and some of the best food on the island.

Check in with Gary and Laura, owners of the Cornerhouse B&B, Restaurant and Coffee Shop, for a recommendation about the most reputable renters and for the best eggs Benedict (and more) in Nicaragua. Cornerhouse also has four stylishly stark rooms for US$30 double. 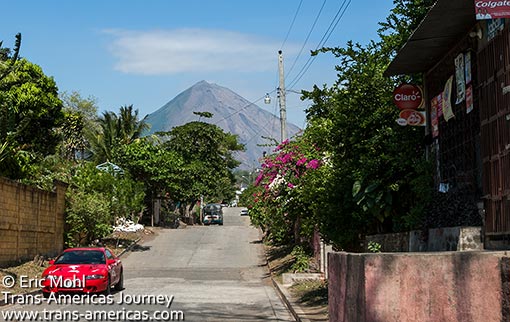 You can almost always see at least one of the two huge volcanoes on Ometepe Island, even when you’re walking down the street in the town of Moyogalpa.

What to do on Ometepe Island

Outdoor adventure is the name of the game on Ometepe Island. You can climb both of the volcanoes on the island, there’s nighttime kayaking, there’s some of the best horseback riding in Nicaragua, and the Ojo de Agua swimming hole is one of the best combinations of natural beauty and just enough infrastructure that we’ve seen. 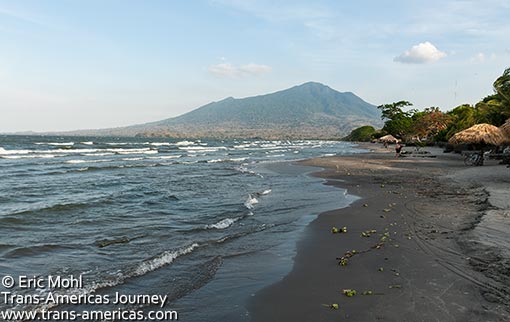 Playa Santo Domingo on Lake Nicaragua with the Maderas Volcano in the distance.

You can also swim in Lake Nicaragua (we were assured that MOST of the bull sharks that used to infest the lake are gone) and the private El Ceibo Museum offers a different kind of adventure with a collection of artifacts you won’t see anywhere else in Nicaragua including pottery, gold items, and fascinating ceramic funeral urns. 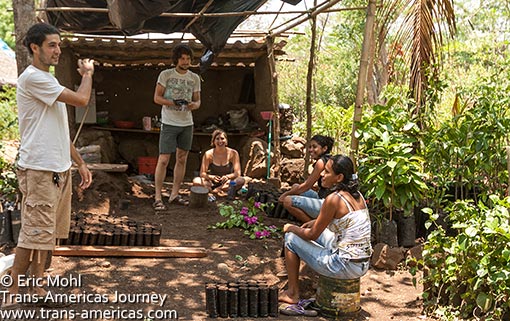 You can volunteer at Project Bona Fide, a permaculture farm and agro education operation on Ometepe Island or just visit to learn more.

And don’t miss the chance to learn more about permaculture on the island by visiting  Project Bona Fide. They also take volunteers. 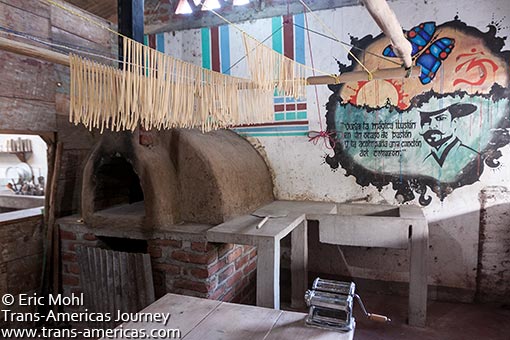 That’s homemade pasta at Cafe Campestre, a stylish down to earth gourmet restaurant in the town of Balgue on Ometepe Island.

We were surprised by the foodie and farming focus on Ometepe Island and that’s translated into some really good places to eat. Cornerhouse, mentioned above, has excellent food. And Chef Ben Slow offers a fabulous farm to fork option at Cafe Campestre where he taps into island’s farmers for ingredients and even makes his own pasta. 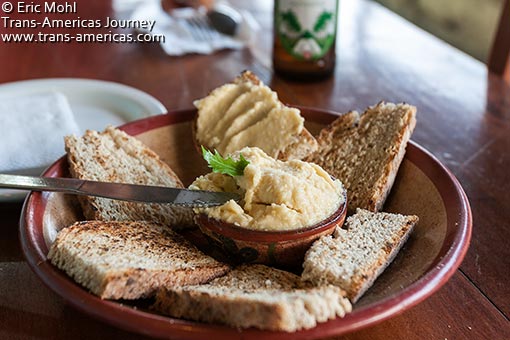 If you don’t want to sleep in Moyogalpa, head to the town of Balgue and look for the school bus on your right. This is El Zopilote, a shop selling handmade jewelry, bread, chocolate, soap, granola (you get the picture). That all happens inside the bus. A short hike up the hill takes you to the El Zopilote Hostel, a lofty, free-form hangout where they also bake a mean pizza and offer yoga. 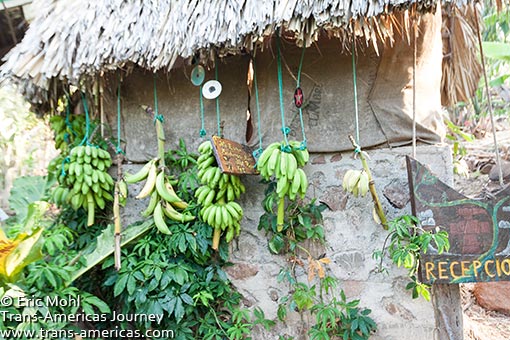 Free bananas at the reception hut at El Zopilote Hostel on Ometepe Island in Nicaragua.

Finca Magdalena also has budget accommodation and one of the best cups of coffee we had in all of Nicaragua made with beans grown on their property on the slopes of Maderas Volcano above the village of Balgue. 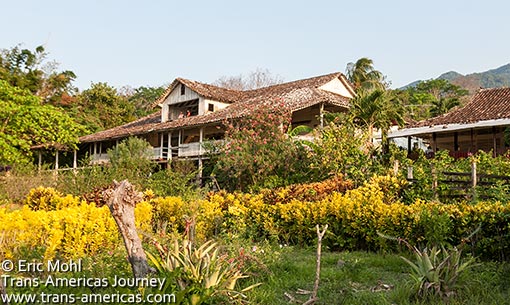 Finca Magdalena, above the town of Balgue on Ometepe Island, is a working coffee farm with budget rooms, a simple restaurant, and some of the best coffee we had in all of Nicaragua.

A spendier option, but worth the splurge is Totoco Eco-lodge, the swishest digs on the island. The cabins, eco heart, and pool are winners. 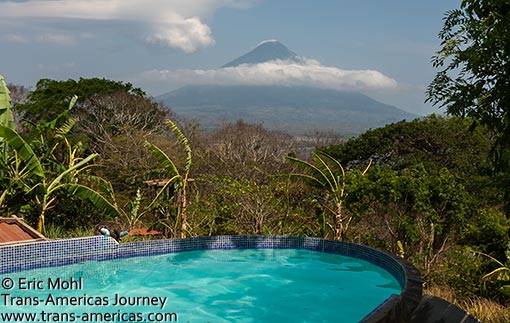 Concepción Volcano as seen from the pool at Totoco Eco Lodge on Ometepe Island.

By the time our week on the Ometepe Island was up we were so excited about the place that we wrote a feature about Ometepe Island for the Minneapolis-St. Paul Star Tribune focusing on the latest and greatest adventures on the island. You’ll find more details and more travel inspiration in that story. 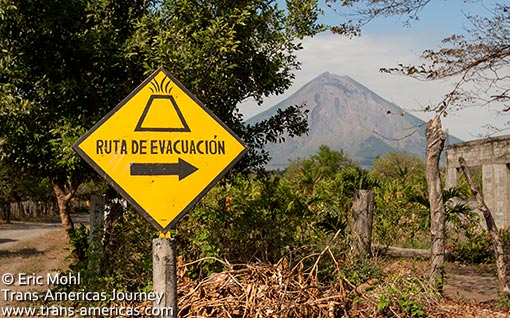 Volcano emergency evacuation signs are no joke on Ometepe Island in Nicaragua.